You went out and got your first shotgun. Now what? Consider getting a very convenient accessory known as a shotgun ‘saddle’ or sometimes known as a ‘carrier’  because it will give you the ability to carry more ammo on your weapon. Shotgun saddles allow you to pluck ammo right from the holder instead of looking for more in your pockets or bag. Nor will you have to lay it down with a sidesaddle; this will save you time and make your use of the weapon nearly hassle-free.

Shotgun sidesaddles vary from manufacturer to manufacturer. The needs of a law enforcement officer is likely going to vary from that of a soldier breaching a door or a recreational shooter at the range so find what works best for you. There are a lot of great product variations on the market no matter what sidesaddle you choose to purchase. Higher end systems that are aluminum and parkerized are going to cost you more than sidesaddles that are plastic or the velcro backed, nylon constructed shotgun cards. Metal will add a little more weight and some bulk to your weapon too. There are trade offs for all of these and those differences generally come down to cost, durability, weight, comfort, warranty and functionality. What kind of shooting are you going to do? You can carry either 4, 6 or 8 extra shells with most commercial side-saddles and some companies offer custom work too. Sidesaddles can cost you from between $20.00 to $90.00. Find what works for you. Let’s break it down some more: 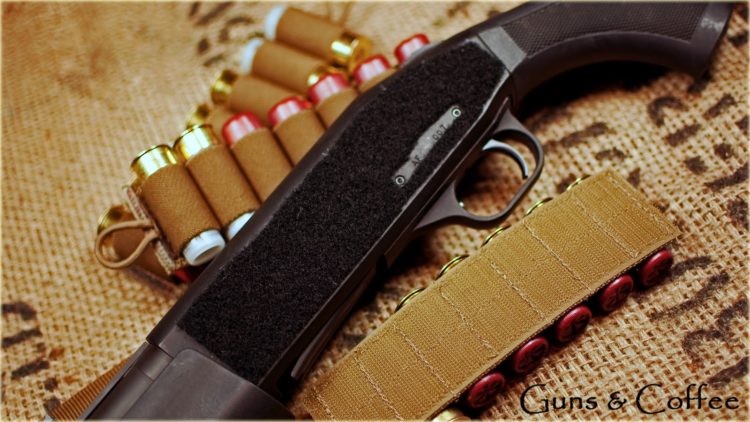 A neat little set up at Guns & Coffee

A. Sidesaddle – The most common form of on-board additional ammunition accessibility. Made by various manufacturers, Remington for example is revered by many in law enforcement and military as being the standard against which all others shall be judged when it comes to material used, workmanship and reliability. Another would be Mesa Tactical. While a bit pricey they make good accessories. Do you need all the razzle-dazzle? If you have the money then why not? But in the end, choose what works over flash. Mesa makes product that is constructed of high-grade aircraft anodized aluminum. Their side saddles attach to the left side of the receiver on most shotguns yet are also available for right side use in certain applications. Many shooters also opt for the Velcro approach. SKD Tactical makes a nice looking model that works well and attaches easily. Keep in mind that some cards can be attached too your vest jacket or rig too.

With one side of the Velcro attached directly to the left side of the receiver, shooters can purchase/construct a card holding 4-8 rounds with a Velcro backing which attaches directly to the Velcro on the receiver of the shotgun. When using a law enforcement/military tactical chest rig, shooters can store multiple cards on the rig itself, allowing them to quickly remove a spent card from the shotgun via a pull-tab and immediately applying a brand new loaded card from the chest rig. Regardless of which type is chosen, shooters approach the use of the sidesaddle in two different ways. 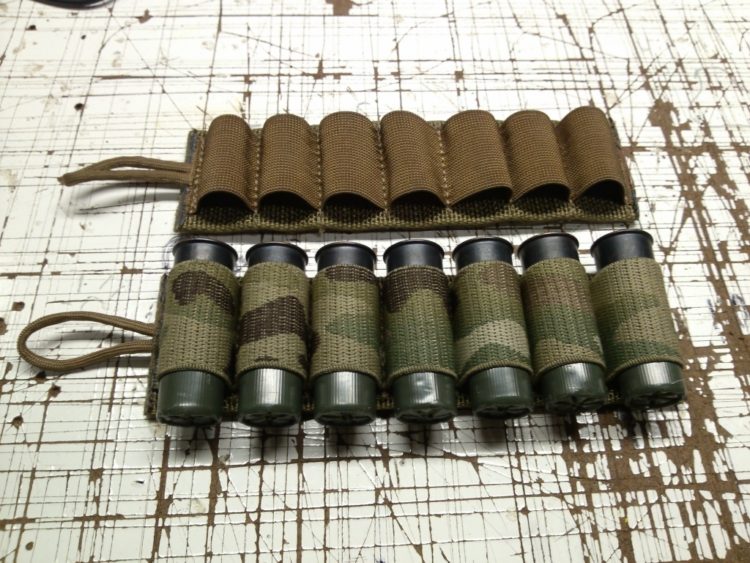 1. Over the Top – Using the hand position as demonstrated below, a shooter can extract one or more rounds from the sidesaddle. Rounds are positioned brass end up in the sidesaddle. By grasping the individual round in the demonstrated manner below, shooter can very quickly go over the top of the receiver and drop the round into the open ejection port of the shotgun and push the action forward (pump) or pop the bolt release on a semi-automatic shotgun to chamber the round. Advanced techniques involve extracting more than one round from the sidesaddle which then allows the shooter to load the first into the ejection port, chamber that round and then insert one or more roads into the loading port below directly into the magazine tube. Students/shooters are recommended to practice their technique using DUMMY rounds in order to make their technique as smooth as possible eliminating unnecessary movement. These techniques will be employed in a high stress environment which greatly reduces finite motor control and dexterity. User typically experiences a high adrenalin ‘dump’ which leads to gross motor control. All technique designed for and used in real tactical shotgun applications must take this factor into account. 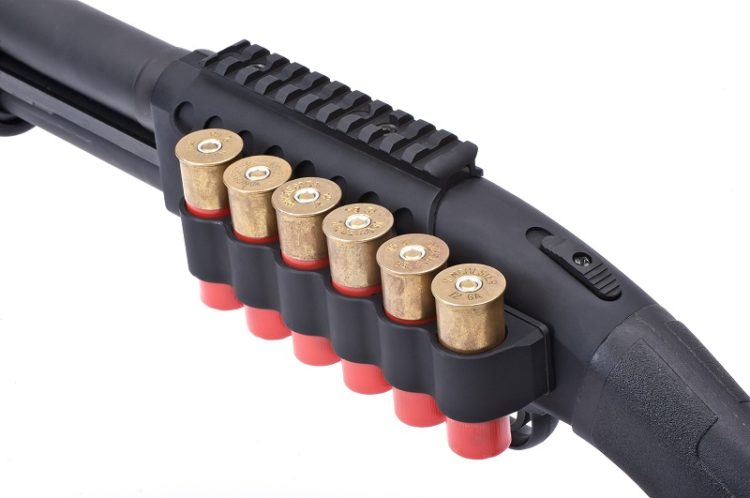 2. Sidesaddle Loading from Below – The secondary method most often employed by those relying upon a sidesaddle involve loading the ammunition onto the sidesaddle upside down. That is, brass end of the round is upside down. Shooters employ a number of different methods for doing this, though coming from underneath and attempting to drop a round into the open ejection port has proven clumsy for many, leading to dropped or bobbled rounds in a high stress situation.

This technique, however, shines when shooter uses it specifically to load rounds directly into the loading port and into the magazine tube. The distance from the round(s) in the sidesaddle to the loading port is much shorter and more direct. Using the ‘Eagle Claw’ Hooked Finger Technique, shooter can easily train themselves to load two or more rounds from the sidesaddle in this position directly into the magazine tube.

This technique can be used out in the open though it is most often employs when shooter is down behind cover and concealment. When developed correctly with proper practice, a shooter can easily load a full six rounds into the magazine tube of their shotgun in three – four seconds or less. 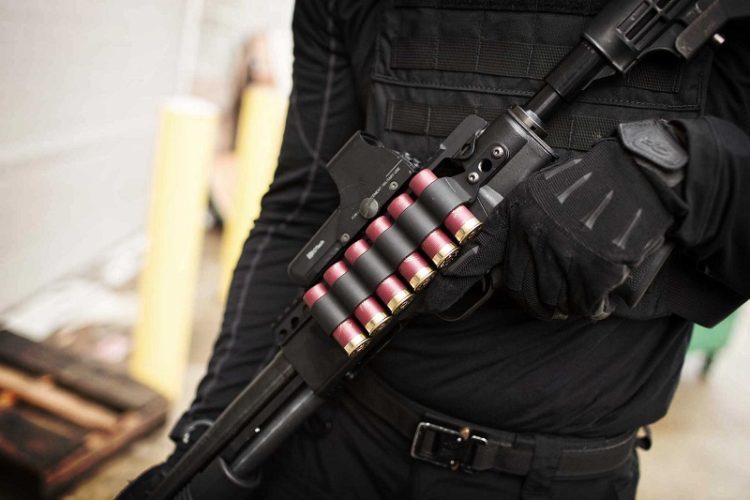 B. Belt Mounted Shot shell Carrier – In many fields, techniques and products designed for one purpose can be transitioned into another with little to no modification and have it serve the purpose exceedingly well. Over the years, products designed for NASA and other scientific endeavors have found their way into the military, law enforcement and civilian marketplace. Computer and high level photographic and surveillance techniques among others used to make sharply defined photos from satellites have been modified for use and have also proven to be beneficial in the medical field as well. 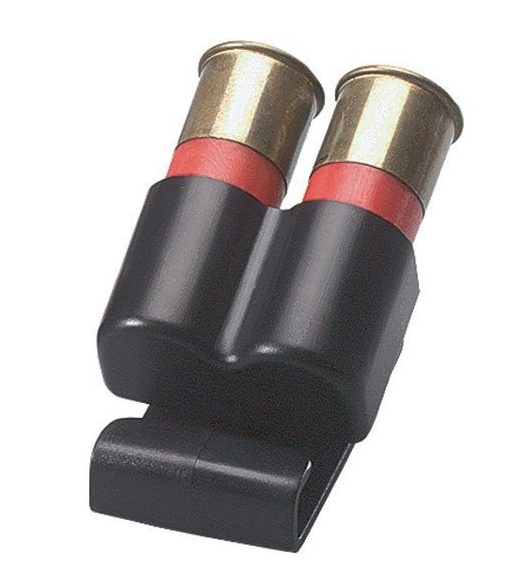 In the case of Tactical Shotgun, products and some techniques developed for 3 GUN Competition Shooters have found their way into the Tactical Shotgun discipline with little to no modification at all. One such product is the Belt Mounted Shot shell Carrier. They can be used in addition to or instead of the sidesaddle. They generally are available from simple two-round loaders as manufactured and sold by Wilson Combat/Scattergun Technologies all the way up to elaborate rigs mounted on specialized belts which allow competitors to load four rounds at a time into their magazine tubes. For the purpose of Tactical Shotgun applications, we focus on the two and four round shot shell carriers as they generally do not require a specialized belt to be used and are much more expediently handled under a high stress situation. 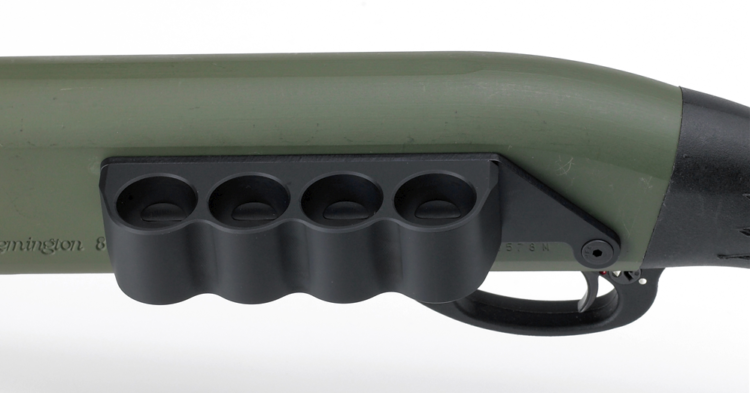 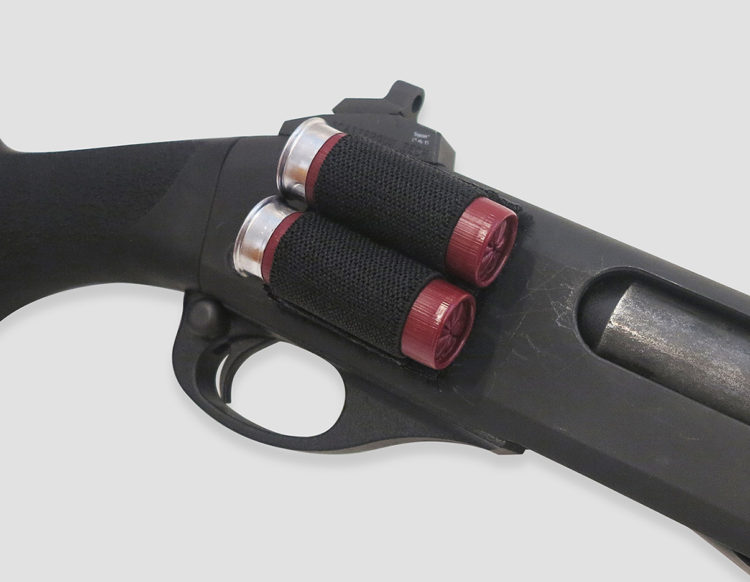 The concept of ‘dropping deuces’ and ‘loading quads’ came not from the manufacturers but from the shooters themselves who saw the product and with practice and innovation on their part, developed these techniques to put themselves in the winner’s circle. One of the key issues with both competition and tactical shotguns is their inability to hold a large number of rounds.

Unless a competitor is using a shotgun specially built with an oversize magazine extension, the typical pump or semi-automatic shotgun will hold an average of five to ten rounds notwithstanding any ancillary on board ammunition carriers. For a shotgun to carry more than ten rounds of ammunition minus any sidesaddles or other onboard shell carriers would require a sidesaddle designed to carry six to eight rounds in the sidesaddle plus additional rounds on the right side of the receiver. This would then be added to the five to six rounds within the shotgun itself.

It became necessary for instructors in the civilian, law enforcement and military community to begin learning and teaching tactical reloading techniques to make the best use of the comparatively lower capacity of the shotgun as opposed to other firearms used. Unfortunately, to a large extent, this does not occur widely. In many cases, the law enforcement recruits are given just necessary weapon safety instruction.

They are then required to ‘qualify’ with the shotgun at short ranges with a minimal amount of both 00 Buckshot and/or slugs if slugs are in fact issued to that particular department or agency. Recruits are told during initial and in service training that the shotgun is a short-range proposition. Additionally, with little to no tactical training with the shotgun, many police officers are not confident using the shotgun.

With no real idea of how their shotgun performs with 00 Buckshot at different ranges, they are often in a position of having to use it and at once finding themselves unfamiliar with the weapon and/or how to deploy it in a real high stress deadly force situation. Arguably, many departments/agencies excel in this area and most SWAT/ESU units do receive training above that of the average officer.

Before you spend one single dime on shotguns and shotgun accessories first know why you’ll need it. There are some great products on the market. Ensure it can be applied at home as well as it is applied at your range.