LTC Jeff Cooper is considered the founder and patron saint of the modern combat pistol school.  Those who are serious students of the martial art that is modern defensive pistol (I call “gunjitsu”), are quite familiar with Cooper’s ideas and much of what he has brought to the subject.  That said, many have not read his seminal book on combat mindset, “Principles of Personal Defense.”

Jeff Cooper had a storied life.  He graduated from Stanford, served as Marine Lieutenant during WWII earning the rank of Major.  Later he served during the Korean War reaching the rank of Lieutenant Colonel.  After, he founded what would later become the Gunsite Academy in Arizona.  He is credited with creating modern defensive pistol technique, firearm conditions and the color code governing one’s situational awareness mindset.  He also created the commonly used four basic safety rules.

The book is extremely short at 79 pages, a reason in of itself for those who have an interest in defensive pistol to read it.  Cooper uses down to earth English and while the book is focused on mindset much of it also applies to situational awareness.  Cooper crafts his philosophy of the combat mindset around seven principles; Alertness, Decisiveness, Aggressiveness, Speed, Coolness, Ruthlessness, and Surprise.

There is little that is revolutionary in the book if one is a serious student of “gunjitsu” but the profundity of Cooper’s numerous observations makes this a mandatory read.  I also believe one should always attempt to read the source versus rely on someone else’s interpretation.  Two key examples of the wisdom in Coopers Book:

Principles for defense “do not change according to geography, history or sociological whim.”  This profound observation should guide one’s personal journey for knowledge in “Gunjitsu” (as well as any other attempt to understand a subject).  Following it ensures one retains knowledge that is widely applicable and helps one avoid fads or solutions to only specific circumstances.

When discussing the principle of “aggressiveness” Cooper says, “You are no more armed because you are wearing a pistol than you are a musician because you own a guitar.”  The quote is entertaining and commonly used.  The worthwhile lesson is way Cooper works it into the subject leaving the reader with a deeper understanding of the principle.

There are many more widgets of wisdom in Cooper’s book.  Going into more of his insights runs the risk of spoiling the book for you.  Read Cooper’s thoughts and see how he supports his key concepts.  When searching for knowledge and understanding it’s not just the destination that’s important but the journey also. 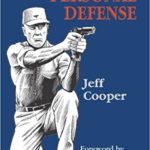 1 thought on “Principles of Personal Defense by Jeff Cooper”