One thing Alvin Callum York learned as a boy growing up in the wild woods of Tennessee was how to be a crack shoot and an excellent woodsman.

York was born to a poor farming family near Pall Mall, Tennessee. He was the third of 11 children sharing a home with a hunter/farmer father and mother. His mother tended to the children while his father supported them by subsistence farming and hunting. Alvin was an intelligent man but not an educated one. There was little time for study. He received little education due to the fact he aided his father with their family farm and hunted for food.

At the age of 24 Alvin’s life changes for the worst. His father dies and Alvin is tasked to help his mother in raising his younger siblings. Alvin began working as a laborer and logger to support the family. Alvin,being very upset and in despair, gave up his faith in Christianity and simply wasn’t good company to be around.

He noted, “I got in bad company and I broke off from my mother’s and father’s advice and got to drinking and gambling and playing up right smart…I used to drink a lot of Moonshine. I used to gamble my wages away week after week. I used to stay out late at nights. I had a powerful lot of fistfights.” 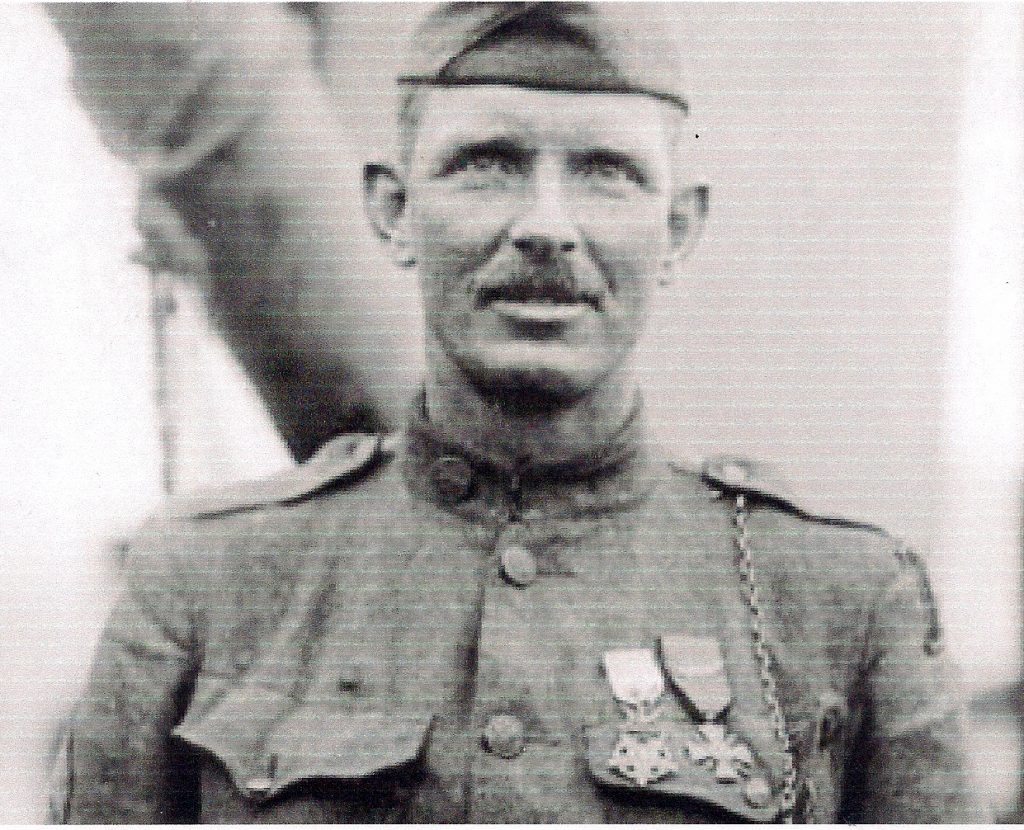 In the next 7 years his life would change dramatically because of the choices he made. On 1 January 1915, Alvin attended a revival meeting conducted by Reverend H.H. Russell. This was the first event to change Alvin. He describes the sermon as if lightening hit his soul. He was moved to accept Jesus Christ as Lord and Savior. He immediately abandoned “smoking, drinking, gambling, cussing and brawling.”

His old friends tried to persuade him to go drinking but Alvin took his commitment to his faith seriously. He taught Sunday school, led the choir and became an elder in his church. April 1917, the United States entered the war. With his religious conversion, Alvin was concerned that he would be drafted into the Army and have to fight in World War I.

Alvin wrote in his diary, “I wanted to follow both [the Bible and the US]. But I couldn’t. I wanted to do what was right…If I went away to war and fought and killed, according to the reading of my Bible, I weren’t a good Christian.”

Alvin’s concern about being drafted came true. He received a draft registration notice. Alvin was in a dilemma because he had read, “thou shalt not kill” in the Bible, and believed a Christian should not kill no matter the reason. Alvin also believed that governments were ordained by God as instruments to obey. Alvin’s requested exemption from the draft but his request was refused. He became more concerned and confused.

He noted, “I was sorter mussed up inside worser’n ever. I thought that the Word of God would prevail against the laws of men…”

Alvin sought conscientious objector status but was refused. He wrote on his draft card, “Don’t want to fight”. Because his church was not a recognized Christian sect, the local and state draft authorities decided to deny his request for exemption. Alvin was drafted into the Army and reported for duty to Company G, 328th Infantry Regiment, 82nd Infantry Division. He was posted at Camp Gordon, Georgia.

His company commander Captain Edward Danforth, and his battalion commander, Major G. Edward Buxton sat with him and had many conversations regarding the Bible and Alvin’s faith. Alvin was an excellent shot but many viewed him as odd because he didn’t want to fight. Both officers tried to explain to Alvin the Biblical justification for war.

Alvin debated the officers as they spent countless hours of their time addressing his concerns. York countered every position the officers took regarding the justification for the use of violence in warfare. One night, Captain Danforth read Ezekiel 33.

“But if the watchman sees the sword coming and does not blow the trumpet, and the people are not warned, and the sword comes and takes any person from among them, he is taken away in his iniquity; but his blood I will require at the watchman’s hand.” Ezekiel 33:6

Alvin stood up and stated, “All right, I’m satisfied.” Alvin then set forth to excel in all the things he was entrusted to.

In 1918, Alvin enlisted in the 82nd Infantry Division and arrived in France ready for the Western Front. He was promoted to corporal after successfully serving in the successful Saint-Mihiel offensive. He was given command of a squadron and his unit was moved north to take part in the Meuse-Argonne Offensive.

At this time he was given the order to enter the fighting by advancing to take Hill 223. The end goal was to take the Decauville Railroad north of Chatel-Chehery. On 6:00 AM the next morning, the Americans advanced and successfully took the hill. His fight would not end there because his battalion was tasked with seizing German-held positions across a valley. Alvin would continue his journey into the valley.

On a wet and foggy morning in 1918, a battalion of men launched their mission to take the German Decaulville Rail. The American battalion moved up through a funnel shaped valley, hoping to force the Germans out of the Argonne Forest and into their hands.

The Americans are greeted by a valley with high ridges and behind them are machine guns manned by German troops. It is clear to the Germans on the high ground that death is coming to the American troops down below.

Machine gun fire begins to tear apart and kill the bodies of the platoon of American soldiers led by their Sergeant Bernard Early. Of the 17 men, 9 are immediately dead. The men are withering under the deadly, incessant fire coming from a well-hidden German machine gun. The American soldiers can’t tell where the terrible barrage is coming from because the German nest is covered by the hilly-heights overlooking them.

York wrote later in his diary, “The Germans got us, and they got us right smart. They just stopped us dead in our tracks. Their machine guns were up there on the heights overlooking us and well hidden, and we couldn’t tell for certain where the terrible heavy fire was coming from…And I’m telling you they were shooting straight. Our boys just went down like the long grass before the mowing machine at home. Our attack just faded out… And there we were, lying down, about halfway across [the valley] and those German machine guns and big shells getting us hard.”

The noise is deafening. As the men are paralyzed into inaction by the hail of bullets, Alvin York decides to take action and this is the event that will change his life and the lives of others. York moves up towards the hill in order to deal with the angry machine guns. He takes advantage of the brush and begins to utilize the shooting skills he learned as a young boy. Alvin returns death back to the Germans. Lying in a prone position he begins to pick off the German gunners and is able to move to a standing position as he evades the enemy fire.

Alvin moves forward from his position. He begins to pick off the German gunners one by one.

“And those machine guns were spitting fire and cutting down the undergrowth all around me something awful. And the Germans were yelling orders. You never heard such a ‘racket in all of your life. I didn’t have time to dodge behind a tree or dive into the brush… As soon as the machine guns opened fire on me, I began to exchange shots with them. There were over thirty of them in continuous action, and all I could do was touch the Germans off just as fast as I could. I was sharp shooting. I don’t think I missed a shot. It was no time to miss… All the time I kept yelling at them to come down. I didn’t want to kill any more than I had to. But it was they or I. And I was giving them the best I had.”

Alvin picked off the German gunners as they fired back at him. Six German soldiers emerged from their trenches and charged at York with bayonets. Alvin was low on ammunition and so he drew his pistol and shot all six before they reached him. He switched back to his rifle and continued sniping at the Germans.

Alvin believed he had killed around 20 men, and because he didn’t want to kill any more than necessary, he shouted to them. He shouted for them to surrender. One of the captured majors aided him by asking the Germans to cease fire. Alvin York and his men captured around 100 Germans and moved them back to his battalion headquarters. In the course of the fight, 28 Germans were killed and 35 machine guns and 132 men were captured. Alvin York consistently played down his accomplishments.

For his actions he was promoted to the rank of sergeant, awarded the Distinguished Service Cross, and remained on the front lines until November 1, 10 days before the armistice. He was thereafter awarded the highest American military decoration, the Congressional Medal of Honor. He was also presented the French Croix de Guerre and Legion of Honor, as well as the Italian Croce de Guera.

Upon his return to the states Alvin York was lauded as a hero. His story was made into a successful movie, starring Gary Cooper, and earned Cooper an Oscar award. Upon York’s death in 1964, he was called “a symbol of American courage and sacrifice” who epitomized “the gallantry of American fighting men and their sacrifices on behalf of freedom” by U.S. President Lyndon Johnson.

York had two life changing events but these were not events that were forced upon him. He chose to trust and have faith in God and believed he would be taken care during his times of doubt. York also chose to bravely go into battle when he could have chosen to hide or run. York believed his life had a purpose. It was Alvin York’s deep convictions that allowed him to succeed. Before his death York was asked by his Division Commander, General Lindsay, how he did it. York replied,

“Sir, it is not man power. A higher power than man power guided
and watched over me and told me what to do.”

God told York, and he believed it, “For I know the thoughts that I think toward you, says the Lord, thoughts of peace and not evil, to give you a future and a hope.” Jeremiah 29:11

This amazing story is found at the Sergeant York Discovery Expedition.