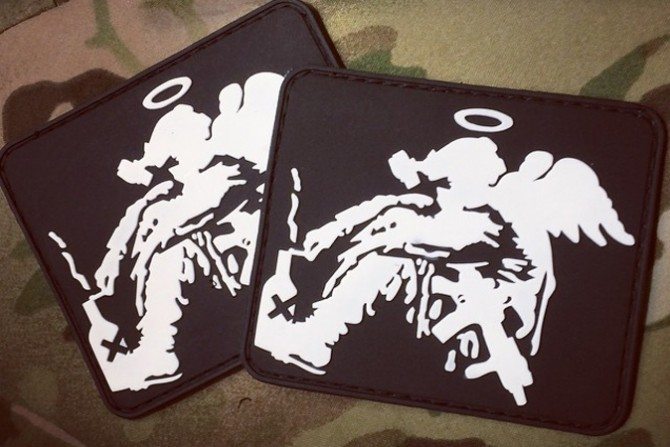 Anyone poking around the internet looking for veteran created content that hasn’t been done before should give a look-see at the spin on artwork from brand Thirty Seconds Out. If you don’t know what 30SecondsOut is then check out the killer artwork from the mind of a retired Navy SEAL. After two decades of gunslinging for the Navy, with the last eleven years served at Naval Special Warfare Development Group, Evan Rommel really wasn’t sure what he wanted to do after retiring in April of 2014. He knew that fear leaves a lot of veterans with paralysis and prevents them from taking action on doing anything worthy to move them forward. People get stuck. Evan knew that action was more important than talking. (Seen above is Evan’s “Heavy Days”) 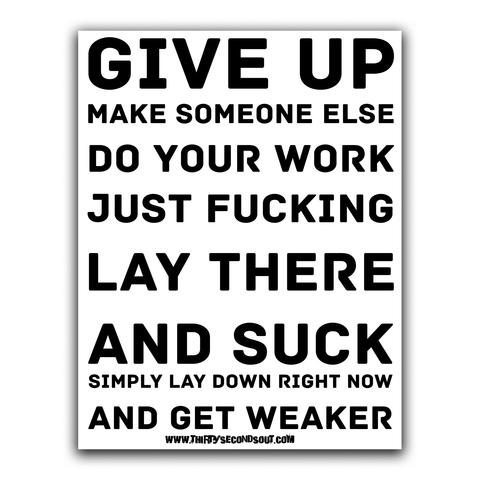 Most shooters that come home need to make some kind of living, but some find that teaching the skills they used throughout their own career becomes a grind, and he wanted no part of that. It’s not that he was opposed to being involved in the firearms industry but he was never really a ‘gun’ guy.

Other than his HK 416 and Eotech Evan wasn’t looking to immerse himself into the familiar. He wanted to do something that he had no experience in. He felt that art was calling him and he wanted to see where it went. What he did have was a 20 year vacuum of artistic inexpression. He had more experience spraying lead than spraying a canvas with paint. Think of a highly trained, active and intelligent person that has experienced a lot of warfighting throughout their twenty-year career yet given crayons and told to be creative. No doubt they’ll sit there mutely trying to process the request. Out of destruction comes creation. (Seen above, the words on his poster, sums it all up.)

He once went to the SHOT SHOW in Vegas but his heart wasn’t into it. There are as many scowling, angry posers, wannabees and fakers in the gun/military community as there are sad-faced, angst-ridden bohemian artists in the art community. He spent three hours there and decided to shove off and hang with his friends outside the event. 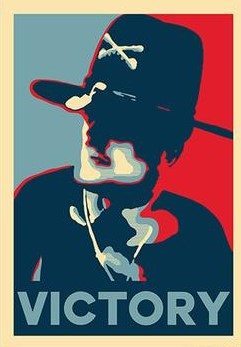 Artwork is the oddest thing that happened to Evan. He built a successful business and didn’t even know how it came about. (I’ll explain how that happened soon~see below) His first attempt at painting grabbed a lot of attention and his fandom continues to grow.

What makes his art unique is it is coming from the mind of a guy who isn’t a victim of life whereas a good bit of the hipster and poser crowds are talking about anguish, pain and the difficulties of being misunderstood. No pretensions here. None of them have been through the least of his troubles. He has multiple combat deployments under his belt and some traumatic brain injuries to ‘boot’.

“I was in the teams for 20 years, 10 combat deployments. I’m happy to be vertical, enjoying this second phase of life. As you know, a lot of guys didn’t get as lucky as I did. Just living up in the mountains making art and apparel that resonates with my friends.”

Flying into combat with his legs hanging out over the edge of the chopper or jumping out of planes at night brings injuries to guys like Evan. “No one controls the situation”, he thought but he felt when a chopper is coming in fast and close that people have to “be the action.” With his art he’s essentially trying to convey this feeling of action and the side effects of combat, through art. Art was the one thing where he could express himself freely.  In the painting below titled Commute the use of gray and red clearly depict the murkiness of the world outside the Blackhawk chopper and the red seems to symbolise the intensity of the warriors about to unleash hell below. The painting is from a pictureof Jimmy Hatch of SpikeK9Fund and his dog Spike. Spike is seen in the center of the painting. 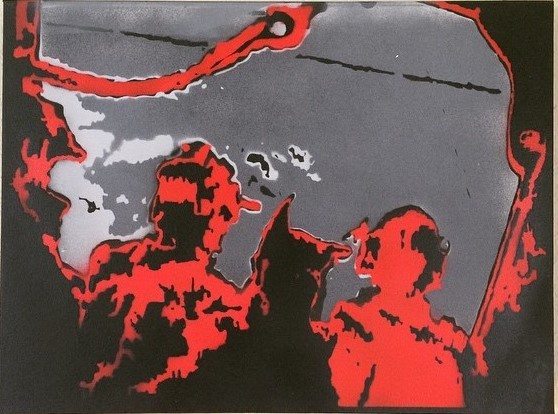 Evan wasn’t lacking in confidence when it came to being on the SEAL teams. He already knew ‘they’ were the badasses that opened doors with their boots but when it came to creating art he didn’t exactly know where to start. In a very informative interview he did with a blogger named Lori McNee, Evan stated, “I’m barely an artist, and I know nothing of the art world. I just started to make art because I enjoy doing it. After 20 years in the SEAL Teams, I wanted to do something new. You know, feeling like a clumsy beginner in a new space, I like that feeling.“

In a world where artists such as the Banksies and Shepard Faireys are fetted for their brilliance for hating Coke or Nike sized corporations in order to get popular Evan on the other hand is taking the other side. The credibility gap happens in art when it becomes more and more mainstream while the onnoxious artist purports to be outside the discussion of money and fame. Evan began learning his craft by working essentially as an intern for about 6 months at Violent Little Machine Shop. He observed, listened, learned and executed the best of what he was taught. He transitioned quickly from gunslinger to businessman.

“I started to like doing art, whether it is painting with oils and acrylics or graphic design using Adobe illustrator. It’s nice because there are no real rules when you’re creating. I like the challenge of mixing a message into the art, with or without the use of text. It’s relaxing and I have the option to keep it to myself or share it on my website.”

I’m getting ahead of myself here. Evan’s stab at art actually began when he decided to paint an image that was stuck in his head for months. He bought a tube of oil paint, a brush and canvas. He figures today that the brush he purchased was actually for painting watercolors. “I didn’t know what the hell I was doing.” he stated. He was inspired by a piece the U.K. artist Bansky created and after finishing the piece Evan posted it to Instagram. 15 minutes later and someone online asked him what the bid for it was. Evan replied, “$97.00” That number was something he pulled out of his ass. A small bidding war ensued and he stopped it at $225.00 in order to give it to the first person to ask what the starting bid was.

His Heavy Days logo and the symbol for his business represents the heavy days that all warriors experience on and off the battlefield. It’s a take on Banksy’s drunken angel that Bansky painted on London Bridge. Evan’s LTC Kilgors is a take on Shepard Fairey’s popular Obama painting.

(seen below is Banksy’s Drunken Angel). 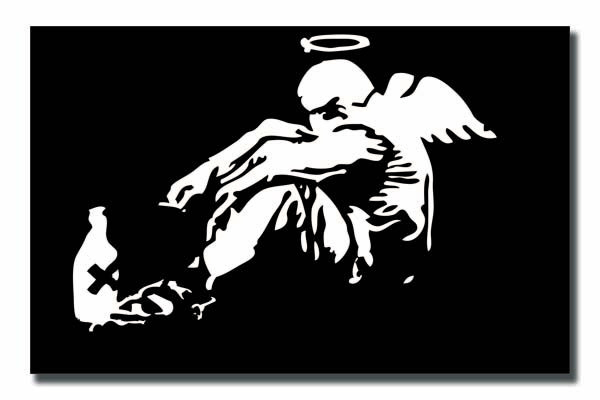 Evan grew up in the punk rock and hard core scene so it wouldn’t be unusual today to see him going to a Misfits reunion tour but that’s where the similarity with Bansky stops. Bansky, like many other street-artists, is an artist that strikes a particualar chord with youth and the underground movements frequented by ‘anti-capitalists’ and readers of Vonnegut, Nabokov, Ellison or Wilde. Banksy established himself as an artist and political spokesperson against all manner of evil in our world. Good grief: Fascism, capitalism, theism, war and totalitarianism. How odd that so many artists, poets, writers and their ilk have statements to make on life when they never really put ‘skin’ into the game.

Evan’s artwork reflects his style and sense of humor. In one of his perceptive moments he noticed the marketing in the Action Sports industry is very large and saavy; inpsiration could be found among people all over the world doing the near impossible with their skateboards, dirt-bikes etc. Evan wanted to be around that action related energy. He also learned to use social media to smartly get his artwork out there. However anyone with an Instagram account can fake popularity and success. 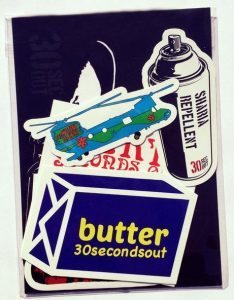 He’s not proclaiming anything in his 30 Seconds Out chalk to be a Rembrandt but he is saying a giant “F_you!” to all the art world posers that contrarily propose two truths. People want fame and riches yet blast the machinery that helps them become mainstream. Evan has seen his fair share of death, combat, pain, injustice and injury but don’t paint him as any victim of life. He stated to McNee, “I knew that the incredible was accomplished fairly regularly by our troops, both in combat and training. So, I started exploring the idea of combining my personal experience in the military (what I know) with styles found in successful image styles and brands (what I don’t know…yet.).” 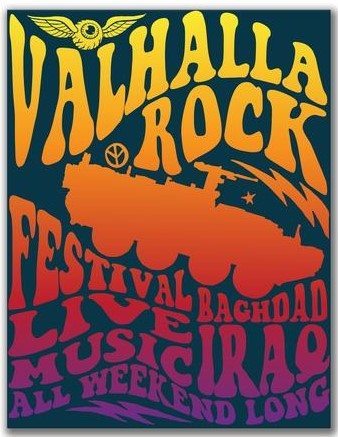 He didn’t pretend his art was going to save lives, or plant farms in Somalia, he wasn’t going to protest against the dark forces of America but he wasn’t going to sit by idly quoting Proust and Pruskin at coffee shops. He joined the Navy and learned to make a difference that could be seen and felt. There isn’t the credibility gap for Evans that we can point to as we can with other artists who are milking the world for money while positing their art is profound. Any artist can say the correct buzz words but how many can state how their art has a real ‘Hurtlocker’ story woven into it.

Banksy’s angel shows a world-weary being with slumped shoulders having a brew and a toke. It seems to suggest even non-earthly ‘do-gooders’ have a rough go at life too. But that’s where the comparisons stop. Evan’s angel painting states something more powerful than Bansky’s angel ever will. Evan’s angel, with a shoulder slung weapon dangling idly down and his night vision optics, captures the darkness of war. It suggests that this attendent has been fighting evil forever and evil doesn’t rest. Evan’s angel has been damaged and tired by war but he is not broken. He’s having booze and a cigarette during his respite from the action. But one more thing, any warfighter knows, this angel is going to be hurtled back into darkeness and into the thickness of battle. He is the light to a dark world. “30 seconds out!” A voice shouts! “30 seconds out!”

Evan enjoys his life. He spends a lot time mountain biking, fishing, hunting and doing ski patrol. In an environment where he was top dog, with ski try-outs, he had to prove himself because he was the newbie. To get better at his craft he watched a lot of YouTube videos, read blogs & forums, and he listened to podcasts. He taught himself how to manipulate art by using Adobe illustrator and Photoshop. He continues to produce new art and get his name out there. I hope you’ll support this veteran run business. Evan is coming out with a lot of killer looking things. Stay tuned…