Running form has always been new to me. My running began going to and from the bus, in Chuck Taylors, during my years in high school, never on a track team, and never was it studied. It wasn’t until I graduated and decided to join the Air Force did serious running ever interest me. The first pair of proper running shoes I ever wore were called Nike Air Max 2, with little air pockets at the back, to train for the Air Force. I then had the best, felt invincible, and all there was left to do was run.

Damage to the body to be elite.


I soon found myself in a school where running was a daily thing: the Pararescue (PJ) school at Lackland AFB, TX. Before too long our team earned a trip to the off-base running store where we’d be professionally fitted for shoes that actually fit us.

We tried on shoes that fit our foot and running type, ran along a sidewalk while the guy checked our gait, and eventually found our shoe. For me, it was a Saucony stability shoe, the Grid Shadow I think – no idea I was so unstable.

I apparently over pronate, so I learned, and this shoe was the answer to gait problems. In the weeks ahead, however, we had far more to worry about – like passing evals (evaluations)– than considering or criticizing our shoes: by the 8th and 9th weeks of Indoc (indoctrination) and about 100 fewer people on our team, just about everybody was having shin splint problems.

I can remember some of those cold Texas mornings before a Long Slow Day: standing on the pad for warm up and smearing Bengay all over our shins. One guy, I remember, actually graduated with fractures in both shins! I too was burdened with the nagging pain of shin splints and they stayed with me for years to come. 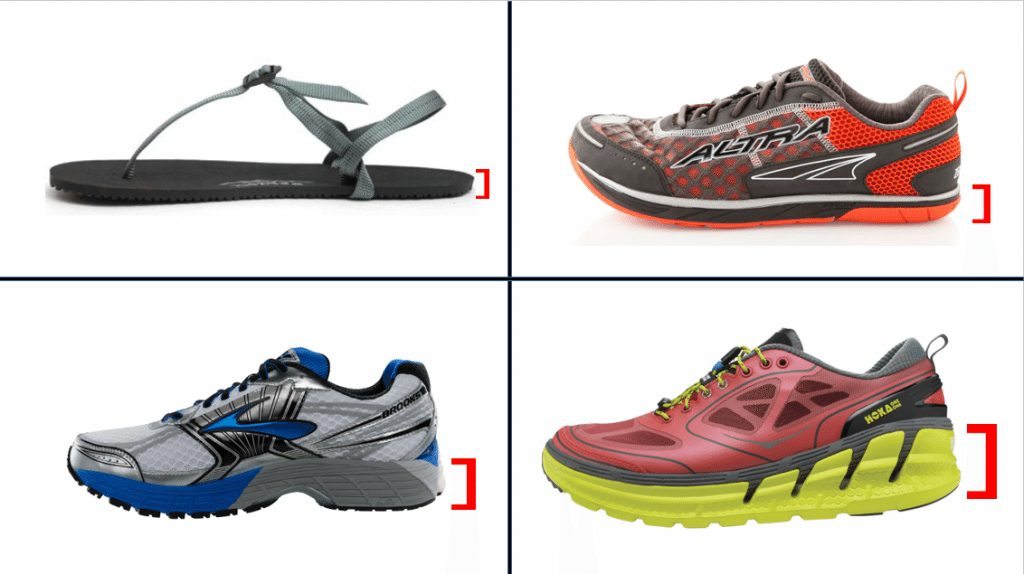 Getting closer to solving the problem

It wasn’t until a decade passed, the early nineties, and I was a civilian, did my injury-prone legs force me to consider dropping some mileage, among other things. Now the injury was Achilles tendonitis: plus plantar fasciitis, plus knee pain, plus the beginnings of a pinched sciatic nerve, back pains and so on. I mean, it wasn’t that bad. I was still able to run everyday, I just had to stretch, and it was getting more complicated.

Running was becoming a high maintenance activity, and expensive. I bought this Packman-looking device (called the Medi-Dyne Pro Stretch) you stepped in with your Achilles tendonitis foot to really stretch it out, I had tried just about every shoe out there landing on one I thought was great – which included a crucial sock-shoe combination! – stretched, rolled, and tried just about every angle I could to keep me running. Problem was the injuries remained.

Cycling through a problem


I went back to cycling. Cycling was the one thing I did really well and I did hours of riding. I figured it would fix the problem. The miles on the seat kept me really conditioned but my IT issue never went away. I tried running again but after about 10 miles the problems came back. I stayed with bicycling and rotated between that and light running. I loved hitting the road on my feet, but it just wasn’t my time. I think it was good to take a long break from running and being on my bicycle opened my eyes to addressing the issue. I got my legs stronger, took some time off, and got to think about options. Sometimes parts of your body needs a rest. Continually hammering away at the problem will make it worse, rather than better. Ever hammer a nail too many times? 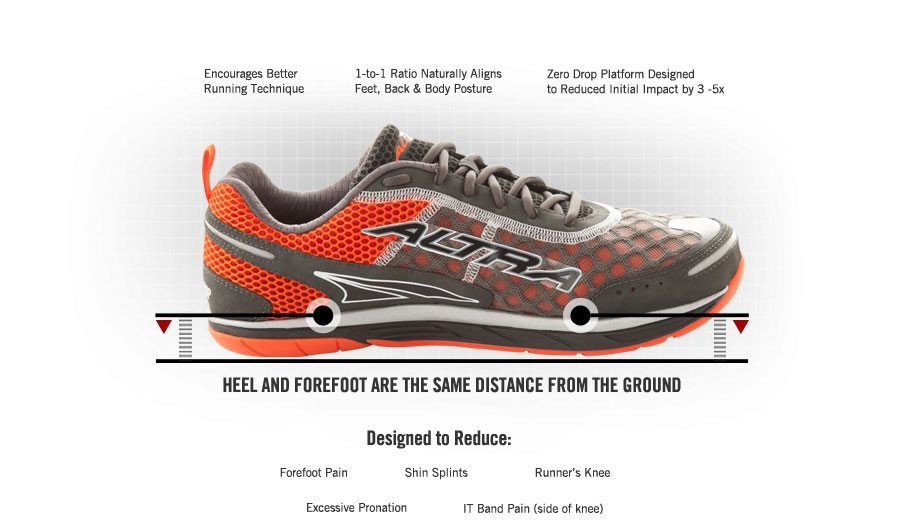 Around that time I came across Timothy Noakes tome called “The Lore of Running”. There were some good chapters on stretching and how to treat your body, but one small incidental study he included really intrigued: the bit on barefoot running. Apparently, people run barefoot: how weird! I think I tried it a few times but it didn’t really stick. This was around the late nineties. It wasn’t until Christopher McDougal’s seminal book “Born To Run” came out, which started affecting how many people run, and produce shoes, that I began to change my tune and commit to running naturally. 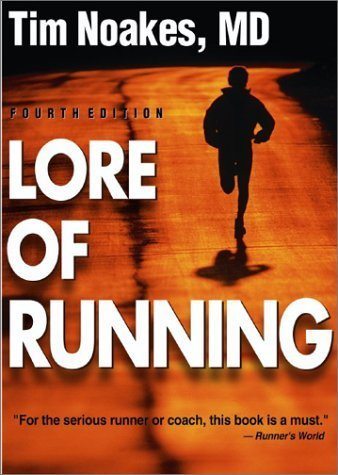 Having an open mind to options-even the weird

The list of running shoes from here on is fairly short. In 2013, while in Arizona helping prepare some new recruits for Para-Jumper school, I trained in kung fu shoes. Ha! We ran the Sergeant Pope graduate workout, a comprehensive, intense, program of long days, intervals, track days… hey, we got pretty fast; but I ran it in those plastic soled, cotton, kung fu shoes. After poring over lots of Internet articles I thought I’d make my Tarahumara tire-sandals, but hung that one up when I couldn’t cut through the steel belted tire, so I just ran in those kung fu shoes.

Soon after training those guys I moved back to CA and bought a pair of Altra shoes with zero drop (i.e., the heel of the shoe has no rise making the entire sole flat and uniform in height).

Those shoes were fine, they satisfied my desire to run naturally, and maybe they are necessary in colder climes, but they weren’t enough for me. I then shed more material and went with the Luna “Mono.” The “Mono” is my first running sandal and I can tell you they are very loved. I’ve put 30 miles of trail running on them these last two days and couldn’t be happier: with my feet, with my hips, my back. 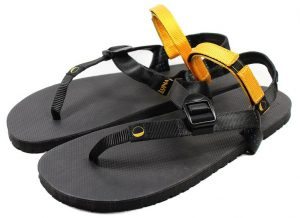 Everything has changed since going natural. I actually run with a straight back, I can feel my body connecting with the terrain, sense how my body is reacting, and the best part is I am closer to being injury free since the mid nineties. Form has changed completely. I read a great book on form, among other thing, called “Anatomy for Runners,” by Jay Dichary, which helped a lot. But perhaps the best part of all this is running for me has found a new chapter and is a whole new kind of fun. It took me a couple or few weeks to condition the legs – ha, my aching calves! – but now that I am conditioned I am having loads of fun and the sandals are an absolute mainstay.

I can’t even imagine wearing my old special sock and shoe combo. No, these sandals are here to stay for me. I’m not sure what I’ll run in for the winter or snow. I’ve tried Merrill and New Balance zero drop shoes, didn’t like them too much personally, didn’t fit my foot. I’ll try a pair of Topo shoes when I get the chance, but probably only when I end up having to. For now, I run in my sandals and take them off when I get the chance.

Still running-don’t give up if you have a problem.

The journey seems long, and though only 20 years, have passed, I have learned, the hard way, a couple of things about running and form. No matter what shoe, whether it’s a pair of Chucks, a pair of Grid-Amazings, or a pair of bare feet, the best thing is to keep working on form. I, however, will never again submit to an old industry standard that lifts my heel up and puts the rest of my body out of alignment. Instead of the industry standard, I’ll stick with the historical standard, as I’ve found out, I’m not so invincible. Find what works for you.