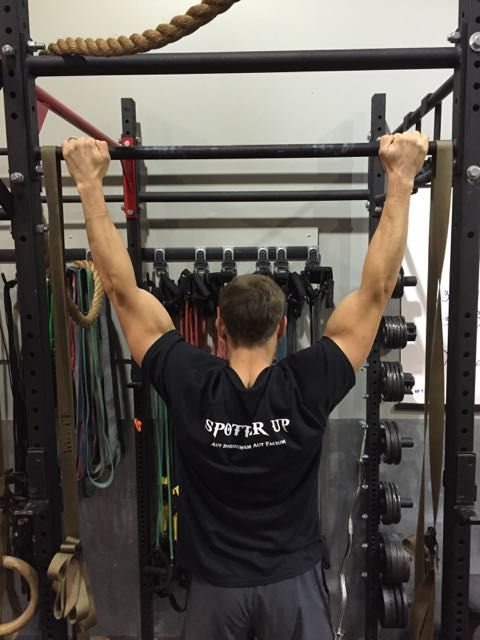 “After rising, I would drop onto the deck and do my first set of pushups. I would then move into the head (bathroom) and start my morning toilet. I would return after a few minutes and do my second maximum effort set after which, I would go back into the head to shave. After shaving, I would return to the bedroom and complete the third and final set. Having completed all of the pushups, I was awake and ready for a relaxing shower. “

I recall Mike sending this program to me. It was taken from a Marine officer recruitment page back in 2004 or 2005. I don’t recall when and I didn’t know the name of the program until I got my hands on a computer about a decade later. When I first got the program I compressed it into my billfold because I wanted a printable version for my pocket. What was today’s workout? That sort of thing.

I trained for about two months and went from maxing out at 21 dead hang pull-ups in a row to maxing out 34 using this plan: I took a week off, was strolling through a park, and said, “hey there’s a pull-up bar,” and to my surprise I knocked out 34.

I was surprised because I had not really maxed out a good set over 30 pull ups in such a long time. It’s not like I was trying over the last decade, to increase my numbers, but getting on point with this program was motivating.

The accumulated effect  of this incremental sort of exercise plan, consistent, over time, made me a lot stronger and I was pretty happy. If my story means anything I accomplished 21 dead hang pull ups in two months of training. If someone might set themselves a higher goal, if they had the time, they could really surprise themselves.

If one sets a goal, and they have an adequate program to get them there, like this one, anything is possible. During the time I was doing them I was living with my brother who had a place in the mountains. To the side of his home he had a large stand alone garage. He was framing the garage with a living space above it. It wasn’t finished so I actually just used a 2×4 door header as my pull-up gym. The roof hadn’t been framed yet so I trained under the open sky, in the cold as I remember, to conduct the ritual. I often would train at night, which was a nice quiet, peaceful, time. That was my only real obstacle, going on jobs with him and staying the night in other towns of course, so some days I’d miss. But when I got back to the mountains I got right back to doing pull ups.
I will always remember those serene mountain days, I needed them. I remember more than the peace up there, though, the time I spent under that door frame, the cold winter sky, and that moon, doing pull-ups. If you want to achieve high numbers then give this program a try. Doing 20-25 is respectable. 30-35 is great. 35-40 plus is outstanding!
This program was created and used by Major Charles Lewis Armstrong, USMC.
Only a driven individual would prepare himself to set a world record in the number of pull-ups completed in a single session. One of the best things about his program is he required you to establish a morning routine. From here is the beginning of your success. Stick with it. After 4 weeks you will have established a great routine and notice some very good changes in your body. Make sure that you do the pull ups properly. Doing them properly is far more important than trying to achieve high repetitions.
While doing research for my article I stumbled upon the Armstrong Pull Up Program. Their site had a great little tracker to use and they encouraged reproduction. Thanks guys!
Armstrong-Pullup-Program-Printable-Tracker

Begin: Each morning perform three maximum effort sets of normal push ups. It is important to rest on Saturday and Sunday as your body will thank you for it. Do your pull ups on consecutive days and don’t miss a day. Also I recommend beginning your pull up routine midday in order to give a rest gap between the push up and pull up routine.

Day 1
Maximum Repetition Sets.  Perform five maximum repetition pull-up sets, perfectly. Do not be concerned with numbers. Execute each pull-up with perfect form or do not accept it a pull-up. Rest 90 seconds between each set.

Pyramid Sets.  Start the Pyramid Set with one repetition, then two, three, and so on until you miss a set e.g., your next set is say ten but you perform only nine — you missed a set. Once you miss, perform a maximum repetition set and done. Rest 10 seconds between each set.

Maximum Training Sets.  Perform at least nine Training Sets with an overhand grip. As fitness levels develop, and you outperform the minimum nine sets, this day will be longer. Rest 60 seconds between each set.

Special Note: A perfect pull-up here consists of three parts: 1) grip bar shoulder width and hang relaxing both body and arms, 2) with legs relaxed, pull up until chest meets bar and jaw-line is horizontal, 3) maintain control during return to position one.

Do not give up! If you stay with this program you will notice that you can perform in the high 20’s and 30’s for pull ups! Your body might go through a tear-down phase like I did. This is normal. Your body is adjusting but stay with it. Eventually it will adapt and you will get stronger. As I said before, you should be able to do 25-40, if you perform them properly from the beginning.

Charles L. Armstrong, LTCOL USMC (Ret) passed away quietly in his sleep early on the morning of August 14, 2011 in his Trophy Club, TX home from recently diagnosed brain cancer. Chuck, a native Texan, graduated from High School in Paris, TX in 1966, where he was an All-State coronet player.

Upon graduation he enlisted in the Marine Corps, with the expressed intent of serving a combat tour in Vietnam. He eventually did that after graduating East Texas State University and receiving his commission as a 2ndLT. While studying, Armstrong managed and coached at the Paris Karate School, Texas Karate Institute (Dallas) and East Texas State University, where he was a nationally ranked competition fighter and Co-Captain of the school’s competition team.

Choosing to remain in the Marine Corps until 1991, Chuck’s career involved him in four shooting wars across 22 foreign countries. He held the posts of Marine Officer Instructor (MOI) at UT, Head of Regular Marine Officer Procurement, U.S. Naval Attaché in El Salvador, G3 of Marine Forces Central Command in Riyadh, as well as others. He was Commanding Officer of units as large as 650 and Chief Operations Officer of units as large as 7,000 and received over 40 decorations, medals, and citations, including the Defense Superior Service Medal, Navy and Marine Corps Medal, and Purple Heart.

Following his retirement from the Marine Corps, LTCOL Armstrong completed the executive MBA program at SMU’s Cox School of Business and went on to work in various executive positions in companies ranging from start-ups to “Fortune 500” before making three returns to combat zones as a civilian. These included Egypt, Lebanon, and, most recently, the Anbar Province of Iraq. Throughout this period, he wrote dozens of articles published in books, periodicals, and professional journals, such as The Marine Corps Gazette, one of which won the Wilcox Award for professional writing.

In recent years he enjoyed mentoring several military, retiring military, and graduating MBAs. In addition to competing in numerous karate tournaments, Chuck, a lifelong fitness enthusiast, has run marathons and on two occasions set the world record for the most pull-ups completed in a single session, performing 1,435 repetitions in under five hours during his second attempt. He was a certified parachutist and scuba diver, and an avid weight lifter. He was also fluent in Spanish and enjoyed using the language on a nearly daily basis for the latter twenty years of his life. Armstrong is survived by his wife Marlys, his son Jason, his sister Jane Harper, his wolf Ringo, and countless friends scattered in every corner of the world.

(Picture courtesy of Wikipedia and Armstrongpullup.com)