If you get a moment take a look at the movie called Mountains of the Moon. This 1990 movie recreates the exploratory journeys of Sir Richard Francis Burton (Patrick Bergin) and Lt. John Henning Speke (Iain Glen). Their goal is to find the true source of the Nile river in the name of Queen Victoria’s British Empire.

If you want to go deeper, try reading the well-written book Captain Sir Richard Francis Burton by Edward Rice (1990), because it will engage you for hours. The book by Rice is likely one of the most comprehensive biographies ever written on Burton and his travels through Africa, India, Italy and far more.

Tim Jeal covers the journey of explorers Burton and Speke in his book called, Explorers of the Nile. Jeal notes the old Latin saying, “Facilius sit Nili caput invenire: “It would be easier to find the source of the Nile.” was stated for a reason: no one could find the elusive spot. Many explorers, geographers and astronomers tried to find the source of the Nile. Men such as David Livingstone, the Moroccan Berber traveller Ibn Battuta (1304-68) and James Bruce all made attempts. It would be 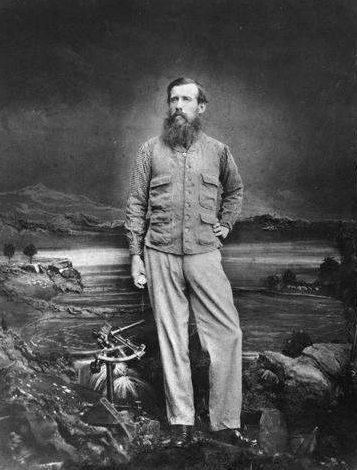 who would achieve the distinction in 1858 but it would come with a price.

The Royal Geographical Society (RGS) was keen on solving the mystery and so Burton and Speke decided to take up the RSG’s proposal and explore the uncharted territories. During their travels they would attacked by local tribes, both become deathly ill and lose much hope of finding the source of the big river. On one of the most interesting pages of Rice’s book, he recounts Speke’s encounter with a beetle that has entered the explorer’s ear.

-Exhausted, Speke went to sleep with them crawling over his person, only to be awakened by one of the “horrid little insects” struggling into his ear. Trying to remove the beetle only pushed it in further. The beetle continued into Speke’s ear as far as possible, and then “he began with exceeding vigour like a rabbit in a hole, to dig violently away at my tympanum. The queer sensation this amusing measure excited in me is past description . . . What to do I knew not.” After trying to flush the beetle out with melted butter, Speke tried to dig it out with his penknife, succeeding only in killing it and increasing the damage to his ear. Infection followed, distorting his face and causing boils.

“For many months the tumour made me almost deaf, and ate a hole between the ear and the nose, so that when I blew it, my ear whistled so audibly that those who heard it laughed. Six or seven months after this accident happened, bits of the beetle — a leg, a wing, or parts of the body — came away in the wax.”–

Burton was obsessed with finding the Sea of Ujji (Lake Tanganyika) and he eventually did. At about 400 miles wide — and at an elevation of 2500 feet it was the biggest lake that any Westerner had seen. Speke eventually found what he was looking for and wrote about his discovery under the title, The Journal of the Source of the Nile in 1863. Most men would have quit long ago if they were so isolated from other men and didn’t have the luxury of having a map to help them find their way through the hard terrain of Africa. It is to our good fortune that men with strong physical constitution and indomitable spirits have already done the hard work for us.

It doesn’t matter what your job in life is or was. Fill your life with worthwhile activity even if you are in retirement. The tragedies born out of regret are reserved for men who sit by the window, whether they be 20 or 50 or any age after or between and never tried to do a damn thing. It’s never too late to change course. No man should ever shrink his dreams or look out his window wondering what he could have been. Death is every man’s inevitable end; let it be a good one. The time is now. “A man chooses to be a pebble among pebbles when he cannot become a mountain.”