If you’re going to spend your money on a movie this week then this is the movie to see. See it in theatres because you’ll appreciate the immersive experience that a big screen and great sound bring to this particularly sad, tragic and heroic story captured on celluloid.

Walking into the movie this afternoon I wasn’t sure what to expect. I’d read the book twice and know one of the individuals involved in the attack. I cannot express the admiration I have for these brave men who did what they did. It is to our great shame that we have leadership like ours in the White House. The Senate Intelligence Committee supposedly found no evidence of intentional delay or obstruction by the Chief of Base; nothing incriminating but do your own research and draw your own conclusion.

13 HOURS: The Secret Soldiers of Benghazi is director Michael Bay’s best work and tells an eyewitness version of what happened on September 11 and 12, 2012, in Eastern Libya. It runs an epic 144 minutes. Bay crafted a riveting war movie full of intense action, and it moves fast. He builds the groundwork for the audience in the beginning of the film. We get introduced to the main characters, see how they interact, as we get prepped for the inevitable moment we know will come. It doesn’t matter.

Despite knowing the facts we cannot properly prepare for the injustice we are about to observe.  A small security team battles waves of attackers and we know that help is not coming from our government. How odd that a movie goer can be upset. But this is what movies do-the director’s intent is to move us emotionally. If I’m ‘pissed’ off after watching this film, how much more angry must those who were closer to the action actually feel? Volcanic isn’t even the right word to use here. We can appreciate Bay’s commitment to get this movie right. He does a good job of telling the story by relying on a sturdy script that cuts out superfluous details to keep the pacing steady. 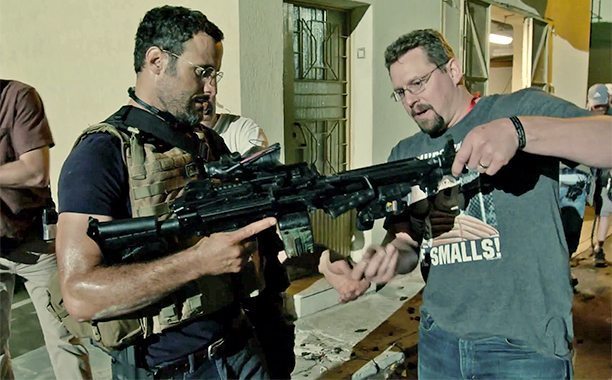 For those who are unfamiliar with the basis for the movie, the plot and story runs something like this:

The movie is based off of the book of the same name. Six men form a CIA unit called the Global Response Staff (GRS) to protect CIA staff overseas and provide security if any problems come their way. In this case it is a terrorist attack on an American diplomatic outpost and a CIA Annex in Benghazi, Libya on September 12, 2012. By the time the event is over four Americans will be dead and 10 injured.

This heart-wrenching situation was preventable in many ways. In real life, the book and the movie, U.S. Ambassador Christopher Stevens (Matt Letscher) goes out to visit the CIA outpost. A terrorist attack soon follows him. Stevens was a ‘true believer’. He believed in his mission and the people of Libya.  Uncovered emails revealed Ambassador Chris Stevens’ concerns for additional security was never acknowledged by then Secretary of State Hillary Clinton. Stevens only had a handful of State Department agents protecting him. He also had to rely on unreliable locals for security. The militants, who are part of the al Qaeda-affiliated Ansar al-Sharia group, eventually attack the embassy and Department of State agents secure the ambassador within the embassy.

When the attackers finally come they try to smoke the ambassador and his team out by using fuel and fire on the vault. Flames engulf the building while DS Agent, David Ubben, screams for help over the radio. He states that if help doesn’t come then all of them are dead.

John Krasinski portrays Jack Silva, another Navy SEAL who thinks he’s taking on an easy, last assignment. Little does Jack know that he is walking into an environment where the CIA staff regard everyone with great disdain and think of them as nothing more than hired-help. A good working relationship with Bob might have changed the outcome. The GRS refuse to accept Bob’s order to stand down and they head into rescue mode.

Director Michael Bay did a lot with a small budget and a sturdy script. The movie was filmed with the consultation of the actual GRS unit. The movie cost just a fraction of what Bay spent on a TRANSFORMERS movie. He felt it was a story that needed to be told. It is tightly-wound and doesn’t meander. It sticks to the facts and sticks to the book, word for word, and properly translates each chapter into a movie scene.

Bay doesn’t need to get into political finger pointing here. We already know the facts. Anyone unwilling to trust endless amounts of data culled from multiple interviews with reliable witnesses is either brain dead or a part of the political conspiracy to hide the truth from the public. Military leaders, State department officials, and the heroes themselves were interviewed countless times over a period of months after the event. I won’t get too deep about that here. The zombie army that America is becoming can set up a punt for Hillary all they want.

The movie has heart, while at the same time being riveting and infuriating. We care about the people in this movie. After more than a dozen years of war in places like Afghanistan and Iraq, we know people like this is some form or another, and can relate to their mission. These guys aren’t solely out there to make the money. Surely the pay for being in foreign hotspots can be more than ample, but unless a man is pure mercenary, there is a part of him that longs to do something worthy. These guys do what they know, and what they were trained to do, and many of us should be thankful for courageous men like Tyrone Woods and Glen Doherty. Courage is strength in the face of pain, fear and grief.

The men here are human. They are not part of the stormtrooper brigade that move and die thoughtlessly in a Star Wars film. We can empathize with their situation and we understand their motivations. We get to see the GRS read books, goof off, talk to their families via long-distance calls, and learn about Silva’s wife’s anxiety over him being away. The moment the Silvas are discussing the need to cut a tree down and how he learns about his wife’s pregnancy is poignant without being sappy.

Bay brings us into the circle of the GRS and we watch the ever-good Max Martini as (Oz), Pablo Schreiber as the loquacious and playful (Tanto), David Denman as (Boon) and Dominic Fumusa as (Tig) they operate as a team. They round out the cast and give solid performances. We don’t get enough screen time with the rest of the team. The movie mostly covers the relationship of Rone and Silva but this is necessary to drive the story. Critics blasted Bay for using cartoon portraits of chartacters. In one scene Bob is seen as an annoying egghead while outside the superbly built Rone is flipping a massive tire during exercise. The CIA staff seem no better than Bob because they continually seem annoyed whenever the GRS team is around. The GRS team said these things actually occurred.

Critics also disliked how the Libyans were portrayed as a faceless Other rather than human beings. Well, folks this was done for a reason. The GRS team never really knew who they were going up against other than the fact that everyone seemed to be firing at them. Let’s end it here. I believed the acting was superb and the pacing smooth. Some of the best parts are the relationship between Silva and Rone. On the big-screen or on DVD; seeing the movie will give you a better chance to contextualize what you’ve observed in the news for the last three years.

Just remember one thing. While critics sit in theatres eating pop corn, and CIA staffers got on a plane to come home, there were a few good men who didn’t make it. Let that sit with you for a second.

Whether you like the movie or not, let that sit with you for a second…