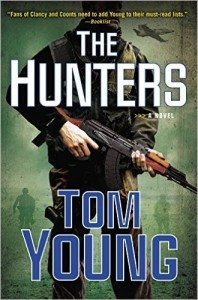 I’d hoped to get this review done in July prior to the release of the book. Tom Young was gracious enough to give me a limited copy but I got bogged down with other reviews. I am glad I had the time to review the book. Tom Young does not disappoint.

Tom Young’s novel, the Hunters, is a great book for those who love Young’s fictional character named Colonel Mike Parson. Parson returns here. Colonel Michael Parson, convinced by his good friend Sophia Gold, into using his leave from the Air Force to fly relief supplies into Somalia in an antique DC-3 cargo plane.  They come up against an al-Shabaab leader, The Sheikh, who recruits young boys to become Jihadists for food and violently kills anyone working with the aid group.

“ I have had a life long interest in the DC-3.  I got the idea for this story when I was personally approached in the 1990s to fly a relief mission.  It did not involve a DC-3, but rather my favorite plane, a C-130 Hercules.  Unfortunately, this project never got off the ground. I wondered if this group had settled for a less expensive plane, the DC-3, maybe it could have been realized.”

Parson, on leave from the Air Force, has volunteered to pilot a rattletrap WWII-vintage DC-3 into Djibouti in the Horn of Africa on a resupply operation for World Relief Airlift.

Things begin to unravel when he’s asked to fly a quick-reaction sortie into the lawless land of Somalia. He and his crew manage to touch down, but get caught in a firefight between African Union peace-keeping troops and al-Shabaab terrorists.

Tom Young has raised his considerable story-telling talents to a new level with THE HUNTERS. It’s a novel in which the protagonist, Air Force Colonel Michael Parson, faces not only combat challenges but a huge moral dilemma

One al-Shabaab fighter in particular, a brain-washed, illiterate (but smart) 14-year old, makes it his mission to destroy the DC-3 and kill its “infidel” crew. He manages to cripple the aircraft, then pursues the crew with relentless, single-minded purpose.

But things don’t go well for him, either. He’s badly wounded in a gun battle with Parson’s group and eventually falls into their hands. They reluctantly take him in and care for him. At the same time, they’re being stalked by the terrorists with whom the young jihadist is aligned.

Tom Young just gets better and better. Tom Young has become one of my three favorite authors ( along with Brad Thor and Brian Haig). In this latest novel, Parson and Gold return to Africa, with Parson “on leave” and serving as a volunteer at Sergeant Major Gold’s encouragement to fly a relic DC-3 cargo plane on a humanitarian assistance mission. Young adds a fascinating new character, copilot Alain Chartier who usually flew airplanes with the French Armee de l’Air. Add to the mix a Hollywood actress and do-gooder activist who has flown into Somalia to film a documentary. Against his better judgment, Parsons allows the actress to hitch a ride on his broken-down airplane relic. Although the flying sequences are great, this is another novel where Colonel Parsons find himself on the ground, and with Gold’s assistance, fighting for his life like an army infantry officer against African terrorists. Tom Young’s personal military experience I suspect are largely responsible for the realistic descriptions of combat, bombings, firefights. The dialogue is great. The action is fast-paced,.very hard to put down, and not just read in one sitting – right through the night. Military-thriller fans should pre-order everything that Young writes in the future