What brand of gun oil is best?

Everybody has their favorite variety or brand of gun oil, something they have found to be effective at lubricating their guns at the price point they can live with. People tend to be married to their favorite brand and often swear its the best there is. However there are a wide variety of products on the market making it hard to pick just one. On one end of the spectrum are people who use 10w30 motor oil like some of my shooting buddies. Its cheap, it works and it’s hard to argue with that. I have another buddy who uses whatever kind of oil he has handy at the moment, which may cause problems for him at some point depending on the product, the gun and the environmental conditions, as there are some products out there that I would not endorse. 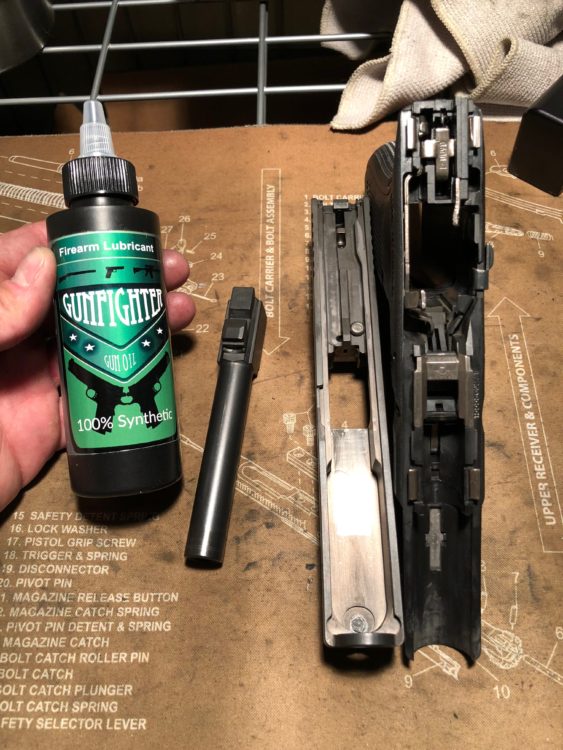 What makes a quality Gun Lube?

While I’m obviously not a Tribologist (friction/lubrication engineer), a good gun oil (“lube”) in my opinion needs to check a few boxes before i will deem it to be good to go.

I started using the Gunfighter Gun Oil about 6 weeks ago, and have been able test it out on two pistols and two rifles over a few range sessions and a couple USPSA matches. I also have some data collected from another Spotter Up writer. For the past couple years I have been exclusively using Lucas Oil Extreme Duty Gun Oil which satisfactorily checks all the boxes I require and I have found that product to be an excellent firearms lubricant. In my admittedly shorter than ideal time with the Gunfighter Gun Oil I have found it to also be a quality lubricant; it does what its supposed to and also checks all the required boxes. It also happens to be odorless and colorless, which may not matter to you but its nice to not have your hands smell like rubber or chemicals. While I will continue to test this gun oil over the long-term and with high round counts, at this time I feel comfortable saying that Gunfighter Gun Oil is at least as good as my former favorite lube, and I would recommend this gun oil to anyone looking for a quality gun oil.

Since I’m not a subject matter expert on lubricants, I won’t go into the differences between hydrodynamic vs boundary lubrication, or various anti-wear/extreme-pressure additives that are commonly found in lubricants. Gunfighter Oil also does not have its exact formula published where I could find it easily, and its possible that companies keep their particular recipes a secret for a variety of reasons. What I want to do is talk about how Gunfighter Oil performed for me and for another writer with respect to the three gun lube standards I personally use, and also compare it a little to my other favorite brand.

Gunfighter Gun Oil publishes the following information on their product:

“Our focus is performance under pressure.  Anything that can detract from lubricating your firearm has no place in this gun oil.  Fragrances, dyes, detergents, and other additives do not enhance lubrication, they can degrade it and eventually separate out of the base oil.  Gunfighter Gun Oil has zero additives and is 100% pure synthetic oil.  Our oil is also NOT BIODEGRADABLE.  While other companies try to stay mainstream by marketing trendy biodegradable oils, we recognize that those oils naturally deteriorate and are not optimal for use in firearms.

My first impression of the gunfighter gun oil was surprise at the fact that it was completely odorless (to me) and colorless, it seemed amazingly innocuous compared to every other gun lube that I’ve used. I immediately compared it to my beloved Lucas Oil and was happy on how similar the consistency was, albeit slightly less viscous and faster flowing/migrating. The applicator for the Gunfighter Oil is also larger, so its harder to apply the oil in precise small doses, which is not a big issue, however I have found that with the Gunfighter lube a little goes a long way, so use it sparingly.

I applied the Gunfighter lube to four freshly cleaned weapons. A Glock 17 MOS which I used for most of the testing in this article, a CZ P07, a Ruger 10/22 Takedown and one of my ARs. Through all the testing I did the lube was highly effective and after multiple range trips and competitions remained visible on all the parts of the gun that experienced the most wear. The only place it wasn’t still obvious was places where heavy carbon built up, which is to be expected.

One of our other writers put 760 rounds through his Glock after one application of the Gunfighter Oil and experienced no malfunctions. Of note, he shot a majority of that ammo in January during sub-freezing temperatures on his private range. He also left the gun in his car overnight where temperatures reached approximately 12 degrees F, and he fired 6 full magazines through the gun first thing in the morning with no failures. He did note that the property of the oil to stay where you put it meant that any debris or carbon that was created during firing tended to stick to the exposed oil in cold temperatures.

I mentioned above that a little goes a long way, and I meant it. Because this lube does not biodegrade, and apparently does not  wear out under anything less than heavy use (I have not reached the point yet where I need to reapply), you really only need to apply a small amount, enough to coat the metal. Anything in excess of that will result in the oil migrating out of the areas you need it, and potentially turning your gun into an oil sieve. But hey, at least its colorless and odorless 🙂

My verdict so far is that Gunfighter Gun Oil is good to go as an effective and quality firearms lubricant. I will continue to use the remainder that I have which should last me a long time, and will report back if I make any new discoveries, good or bad. As of now, I would honestly say this lube is at least as good as my other favorite gun oil, and I feel confident using this product on all my guns going forward.

Final note, as I was writing this review I noticed on the Gunfighter Gun Oil website that John Harrison of Harrison Custom helped with the initial testing of this lube, and endorses it as good to go for his legendary custom 1911s. Thats a good testament to a product in my opinion and also only one of many you can read on their site.

You can pick up a bottle of Gunfighter Gun Oil direct from their website or on Amazon.