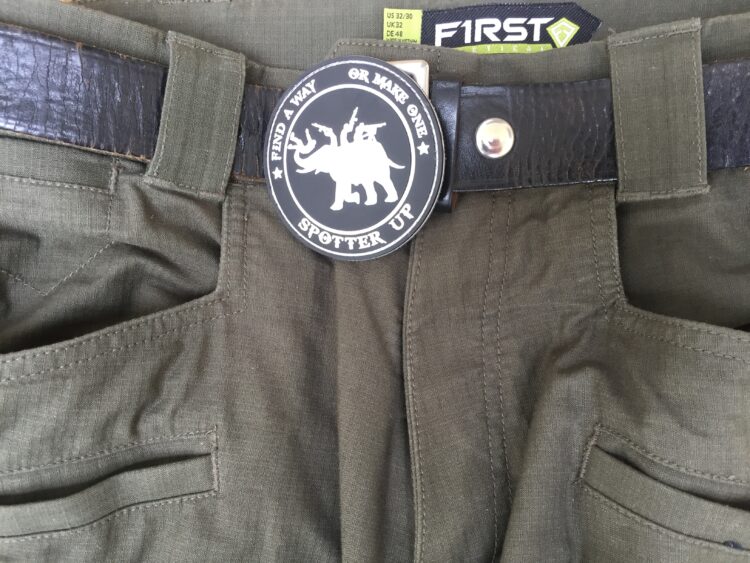 It isn’t too often that a garment comes along that combines enough function without screaming “tacticool!” and which is durable enough to last from training, to mission-specific, to casual wear.  Thanks to the outside-the-box thinking of the guys at First Tactical  – I think we have a winner.  In case you haven’t heard, First Tactical has set out to kind of revolutionize the industry, and make something better from what has already been tried.  They have also taken some focused strides in continuously improving their products.  First look at the Defender Pants, and its clear.

I have been wearing these dungarees, trousers, pantaloons for several months.  To the range, to work, to the store, to an evening out…   These things are so comfortable, I end up washing them and putting them on again and again.  While we’re all used to having and EDC – Every Day Carry, I think what we have here is one of several First Tactical options for EDW – Every Day Wear. 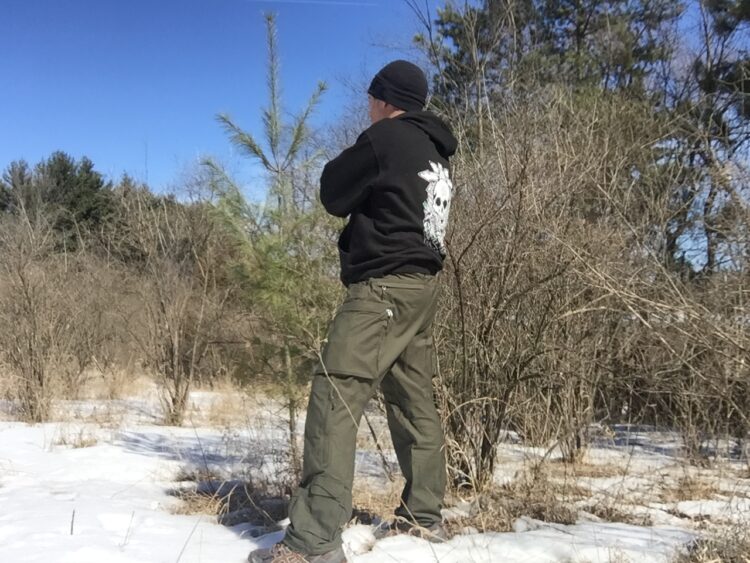 Multiple features prove that a lot of thought went into the design and production of the Defender Pants. It isn’t just a well cut, cool looking garment with a ton of pockets.  The best I can describe the style of the Defenders, is a BDU, combined with your favorite pear of jeans, combined with yoga pants.  I actually did yoga in them, probably freaking out the forest life and initiating several calls for service for the local PD.  The unique cut of the Defender pants allows for an incredible freedom of movement, which is also due to the extra room in the gusseted crotch and upper thighs.  The leg is somewhat tapered, however, by no means tight.  I wore these to the gym several times, going from a midwest winter weather outside, to a heated indoor gym.  The level of comfort transcended the environmental differences, and these are quite possibly the most comfortable pants I have ever worn. Much like some women wear yoga pants everywhere (thank you), the FS Defender pants are hard to put down.

The overall ripstop Cordura material is soft and breathable.  The knees are not padded, but rather seem a thicker layer of same ripstop Cordura, with outer zippers which allow for knee pads.  A great idea is that the knee pad access is zippered and not hook and loop.  Not only is the access quite, it is seamless.  The same knee pockets can be used for maps, soft bandages, and will fit a set of nylon rain gear without any issues.  A unique feature, the long side zippers along the knee access are up and down, rather than hot and loop above or below the knee. Another nice feature are the extra vent holes in the inner thighs and crotchal (real word) area.

Critical areas of the Defender pants are reinforced. Belt loops, already wider than traditional BDUs or OCPs are thicker and riveted in a couple side spots where a holster is likely to sit.   They are also well placed, eliminating sag, while having a comfortable and appealing support. The belt line is thicker and wider than most other battle dress or similarly purposed garments.  What is genius about these pants is the fact that the multitude of pockets isn’t really visible in daily wear.  Meaning that they don’t stand out.  The pants almost look like a pair of modern slacks.  What makes the stacked hip, side, butt and leg pockets so unique, is the angle.  I believe that this is the testament to the angle of approach in how First Tactical functions.  The zippered pockets are angled at a perfect height and degree, to allow access almost instinctively.  One handed, gloved with the nice zipper pulls, and while on the move.  To say that I am impressed with these is probably an understatement.  After week one of wear and tear I wished that our issued uniforms in OCP would be made just like the Defenders. 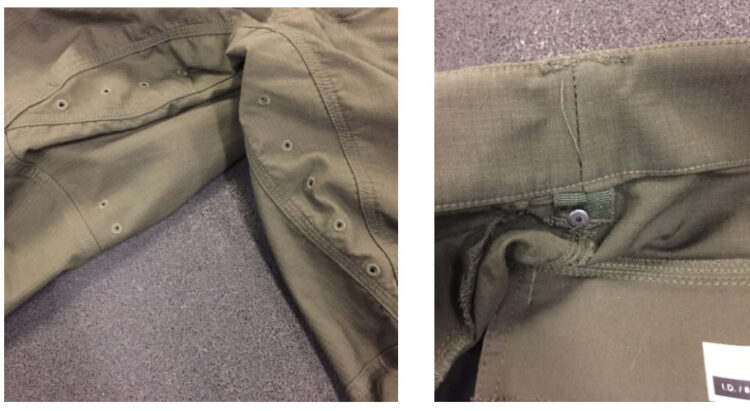 Several exterior pockets are open, and allow for placement of anything from tourniquets to edged tools, to intermediate weapon options. All are also reinforced at openings and wear points. The back and large side pockets have storm flaps, with the later also having interior dividers which work very well for first aid, batteries, magazines and your favorite nutritional sources.  The zippered fly is topped with a double waist closure, which pairs a traditional button as well as a snap closure.  There are two hook and loop pockets toward on the outer side of each lower leg, just above where the pants would meet the boot.  These are the only hook and loop pockets on the pants, and also have a top flap.  These are nice options for tourniquets, also allowing for the same placement and carry as currently within the Army and Marine Corps regs.  The bottom of the pants where one would expect a drawstring, is fitted with a very innovative bungee.  Gone are the days of tucking or cutting the nylon straps you never used.  The bungees are a pleasure to cinch up, not noticeable when no in use, and work perfect one handed and in gloves. 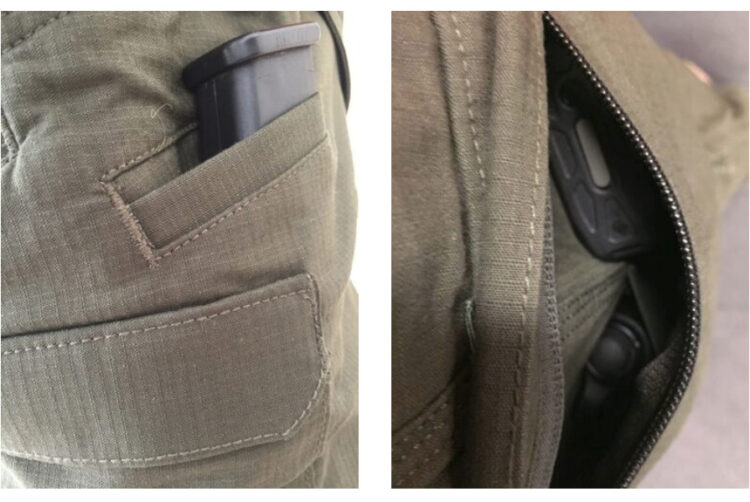 After months of regular wear and several washes, I found only a few tiny loose threads on some of the edges, equivalent to something you’d cinge off during a uniform inspection, with no functional areas fraying or loosing any whatsoever.  What’s even more amazing, is that after all this the Defender pants have not faded, have not lost their breathability, flexibility or any element of function.  The zippers are as smooth as the day I put them on for the first time. 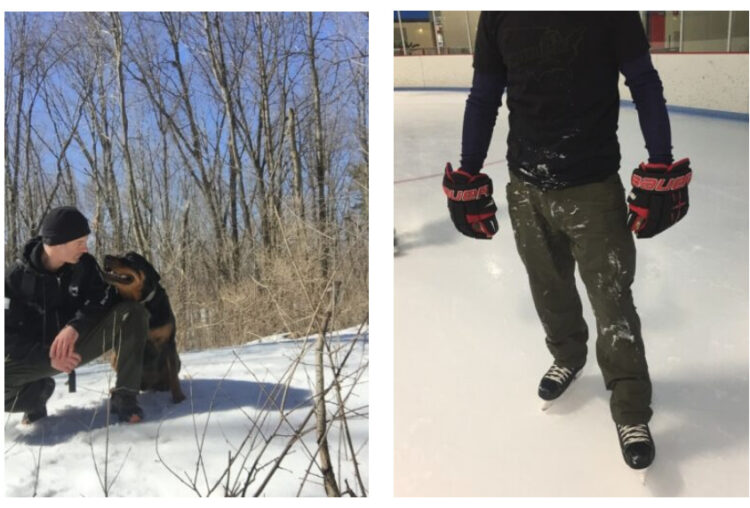 I have intentionally wore the First Tactical Defender pants in all weather conditions.  Working in deep snow I soaked the knees, which took about 10 minutes to dry in winter temps.  The amount of mission-focused applications for the Defender pants is only limited by the users imagination.  With colors in black, navy and od green and a wide range of sizes, this only leaves me wishing that the Defenders would come in Multicam (FS does offer other garments in Multicam).  At $159, the value is very fair for the amount of abuse these pants can take. Oh, and there is also a shorts version of the Defenders.

FS also surprised with a pair of shorts.  Not being much of a shorts guy with the distinct exception of Silkies, I put these off until the last minute.  While a more straight forward design overall, the cut and feel is amazingly similar and just as comfortable.  There are two velcro leg pockets with large overlapping flaps, with the rest of the just as smart placed as Defender pants, open at the top. The stretchier Teflon enhanced rip stop material at upper thighs offers a nice flex, and the cut and stitch above the rear pockets rounds off a really nice pair of hot wether EDW.

It is extremely frustrating when a uniform item fails, or fails to perform to any expectation, considering the amount of money spent.  Traditional and issued work garments have a tendency to dominate the industry, yet too often lack the long term performance expected. There are no such issues with the FS Defender pants.  They have performed flawlessly time after time.  I hope that more color options become available in the future, and look forward to the same innovative quality.