Have you ever had to take a physical test that you really didn’t like? Most of us have had this experience. Did you ever wonder why you didn’t like it? The statement I hear most often is, “This is stupid!” What makes it stupid? In most cases it’s not necessarily the fact that you might not perform well on the test. The real issue is buy-in. Soldiers have a nose for B.S. and even if we can’t articulate our reasons, we have an instinct that tell us this thing we’re doing isn’t what it ought to be.

When it comes to testing, there are a lot of traps that people will fall into. For example, many people are in love with the idea of crafting a “test” that is nothing more than difficult and encourages people to exhaust themselves.

Some tests prescribe events that are perceived to be equal. Take the military’s obsession with push-ups. FM 7-22 states: “THE PUSH-UP EVENT MEASURES THE ENDURANCE OF THE CHEST, SHOULDER, AND TRICEPS MUSCLES.” That’s true from a certain point of view. There are four major problems that present themselves.

Yet another problem exists. Dr. Mel Siff states the following: “It has been stated that the most specific test of all is performance in the actual sporting event.” If we extrapolate this idea to combat we run into some very dangerous assumptions for fitness, tactics and strategy. It can be said that despite the profound problems we have with obesity, injury and the like that American soldiers are winning decisively so there isn’t a problem with physical conditioning. This ignores the fact that the opponent and the competition are not equal. A larger example of this is the way that Operation Desert Storm seemed to validate a host of American strategies and tactics. Unfortunately, that proved to be false because it wasn’t a fair fight. Let’s put this to bed with a movie reference. Remember the Rocky series? In Rocky III, following a big success Rocky allowed himself to slip. He was fighting lightweights for a long time and he thought he was still a world champ. But that wasn’t true. When a real opponent came onto the scene, Rocky got his clock cleaned and had to return to his roots to stage a comeback. The moral is that competition is not the best test if the opponent isn’t up to your level. The only time it is a good test is when the opponent is better than you are.

When we examine any test, we absolutely must evaluate it against these eleven excellent points. In order to really dig into it I also use the following questions to illustrate exactly what is being tested:

There are a few more questions I ask but these are the ten primary questions that get us moving in the right direction.

There is one final problem that needs to be exposed now that we have covered these important points. That problem is one of knowledge and experience of the person developing the test. The 21 points listed above cannot be satisfied by anyone who does not have a solid understanding of the sport, task or activity, nor one without a solid grasp of exercise physiology and sports science. It doesn’t mean that someone is less of a person for trying, but it does mean that you do need to be well grounded to develop a good test. This lack of grounding has given us some truly terrible informal tests being used throughout the military and civilian world. Sadly they don’t mean anything because they violate all of the 21 points above. 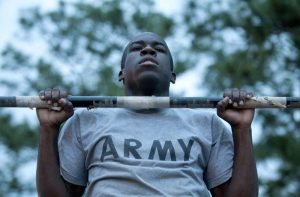 A great example of the above is the Upper Body Round Robin (UBRR). This test is a horrifically unbalanced and ill-crafted test. It evaluates 5 of 20 primary human movement patterns and is nothing more than some exercises thrown together with poorly defined performance and scoring parameters. It serves as an excellent example of someone trying their best to do something different and better, but failing due to a lack of knowledge and experience in the field of human performance. On the one hand, I congratulate the original author for his initiative! On the other hand, there is a better way and RIKR Defence can help.
If you don’t have the education to this yourself, RIKR Defence has a series of tests that meet all of the criteria and more for the combat soldier. If you want to design your own, you can use our Military Fitness Model to select test events and the standard you’re shooting for. Easy! To get the Military Fitness Model just sign up for the RIKR Defence Bulletin and we’ll e-mail it to you.