The Start of the Walk

Some time ago I had a day off and felt like going on an adventure. So me, my dog and our dear friend, who much like the elusive Mr.Manchester, wants to stay anonymous and so shall be called ShyGuy. You know, like the little hooded and masked guys from Super Mario? Anyway, we planned on following  a trail we had walked in the late winter. Back then there was still a good 20cm of snow on the ground. Now the spring was in full speed and the scenery a bit different from earlier.

We had a hard time trying to get over a stream that did not have much of a current in the winter. But now that all the snow had melted and there was several weeks of rain before the walk as well, the current was really strong. We might have been able to wade trough it in a bend. But with the dog it was impossible, so we had to circle around before we found a way around the stream.

The bushes were thick with new leaves, so the moving was cumbersome and I was wishing I had my larger knife with me. Also, made a mental note for getting myself a good small hatchet for similar occasions. 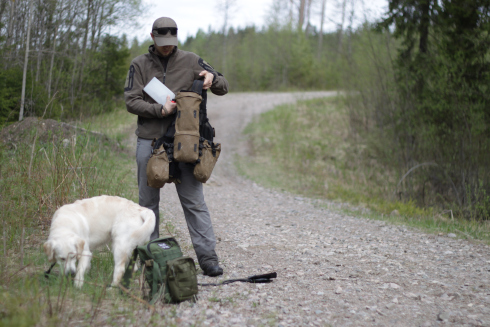 We took a break while on the long detour.

We wanted to reach a hill-top from which we last time used to scout the surroundings. The view from up there was nice and we meant to have a nice cup of coffee and a relaxing hammock nap. The climb was a lot easier from the sloped side from which we approached the top this time. On the ground we saw a lot of moose droppings and tracks, some of which were very recent.

On the hill-top we propped up my Mil-Tec Light weight hammock and put fire in the good old BCB Crusader. The coffee of the day was my go-to outdoors coffee of the time: Grower’s Cup Single estate Specialty organic coffee, this time from Bolivian beans.

That Coffee is amazing! It is brewed in the bag and the bag is very light and packable prior to the brewing. The bag contains real ground coffee beans and not any of that instant garbage stuff you usually might take with you on a hike. Just add right amount of boiling water (there is a guide on the bag how to brew stronger and milder coffee by adjusting the amount of water applied) and you have as nice a cup of black coffee as in any coffee-house or café. The only difference is that you might have a much better view. 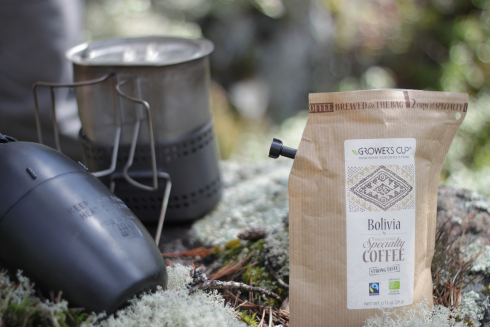 The hammock is nothing fancy; a lightweight, net type hammock with long ropes and sturdy metal rings with which to attach it by. I do not generally have a lot of faith in Mil-Tec products. I have had a few different items from them and most of it have been quite poor. But there are two pieces of gear I have kept in regular use. One is their webbing BDU trouser belt, which I use with all my outdoor pants. And the other one is the hammock. It is just as good as it needs to be. There is nothing fancy about it, it just gets the job done and that is that. It is not the most comfortable hammock, I will say that, but it works for me. 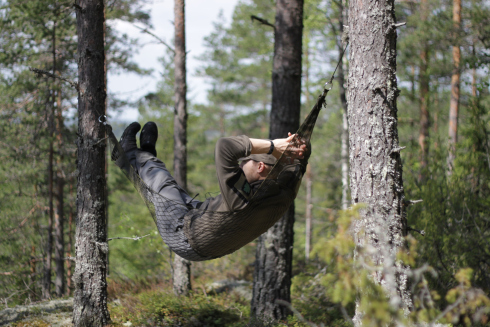 After the afternoon coffee and nap time we headed back and the last bit of the journey was quite uneventful. We did a bit of scouting, watching carefully ahead where we were about to go. The word around the town was that there had been a bear sighting around that area as well. Luckily we did not encounter the beast or even see it’s trail. Though rough in the beginning, it was all in all a happy, easy sunday walk.

The other part of this post is about the gear. I had my new Claw Gear Aviceda fleece on for the first time to the woods. The full review of it you can read here.

I also had my new Triple Aught Design Field Cap with me. And I will have to say, that although it is a very simple cap, it is very well made and I like it. As with the Covert RS Pants, I like the discreetness, which is enhanced by the lack of big hook velcro patches, that you find in most operator style caps today. It is an ordinary looking ball cap with military grade standards, without looking too military-like. And this makes it perfect for just about anything from the range to hikes and from the pub to commute. A solid 5 out of 5 EDC cap in my opinion.

Also, you might have spotted from the pictures that I was not carrying my ordinary Kifaru E&E back pack, but rather a SAAV, or a South African Assault Vest. And I would like to tell you why, in a bit greater length. 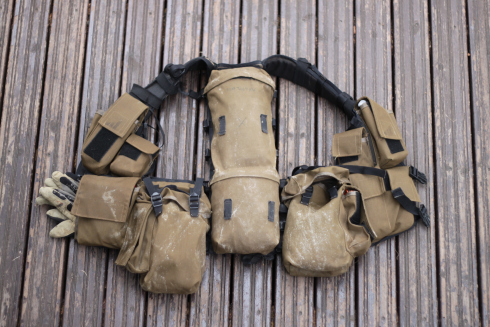 The SAAV is an iconic load bearing vest. It has been used so many that it is useless to try to count all of them. And the design has been copied time and again by different cheap-gear companies (like Mil-Tec for example), as well as some quality producers, who have even tried to enhance the original layout.

My SAAV is the real deal; it is the SADF’s own nutria brown/black version of the vest. I bought it used from a local Finnish dealer, Varusteleka, and the patch they had been delivered in came straight from South Africa. My vest even had some odd leaves in one of the grenade pockets and a paper for enlisting to South African Defence Forces. Did not send my details to South Africa, though.

I have used the vest for a few airsoft games, but I never was fully satisfied with it. I always thought it was a bit flimsy and annoying to wear. I thought to get rid of it several times, but kept it anyway. A while back I saw this picture in Pintrest about a similar SAAV used as a hiking backpack and I thought it was funny.

When we were putting the stuff together for the walk I found the SAAV from the closet, remembered the picture and jokingly thought to try it out. I packed waaaay more than I needed for the short walk, to get all the pockets filled (all the small stuff that I had at hand that I might have taken with me on a one night hike) and to get a proper feel of how the vest would work for this use. 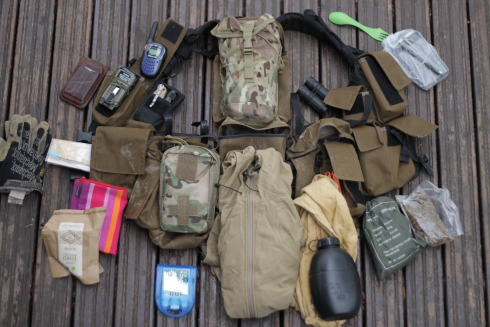 And I have to say it was really REALLY good! I had a quite a few kilograms packed in it, but I did not feel a thing! The weight distributed itself perfectly, the center of the weight was low and the thick, sturdy shoulder paddings and straps were really comfortable.

Turns out, all those times used it light battle kit, I just did not pack enough to make it work! I remember reading about a survey that stated that the SAAV is the best military fighting vest, judging by the amount of gear, the amount weight it can take in and the weight distribution ratio to energy consumption with it. And if I had any doubts about this before, I do not have any now.

The only downside of using the SAAV as a hiking backpack is that it looks so tactical. And well there are few other things, like you cannot use a proper backpack with it. Although the Nutria colour scheme is quite neutral, unlike many camo patterns, and with a few simple modifications SAAV would make an excellent fishing/hiking utility harness. If I ever get around to make some alterations to the vest, I will let you know.

(And the translation of the Intro, by yours truly, for all who do not know Finnish and wish to know:
“I want to be a Son of the Forest,
a Hero of the Tall Pines.
In the Fields of Tapiola
I will wrestle with the Bear,
and the world shall be forgot.”
-Foresters song, written by Aleksis Kivi
Note: Tapiola is the domain of an ancient Finnish God of the Forest, Tapio)

This review was first published in the Noble & Blue. Noble & Blue is a small Finnish outdoor and tactical gear reviewing blog, that also shares stories of learning and adventure. Click here to know more about Noble & Blue