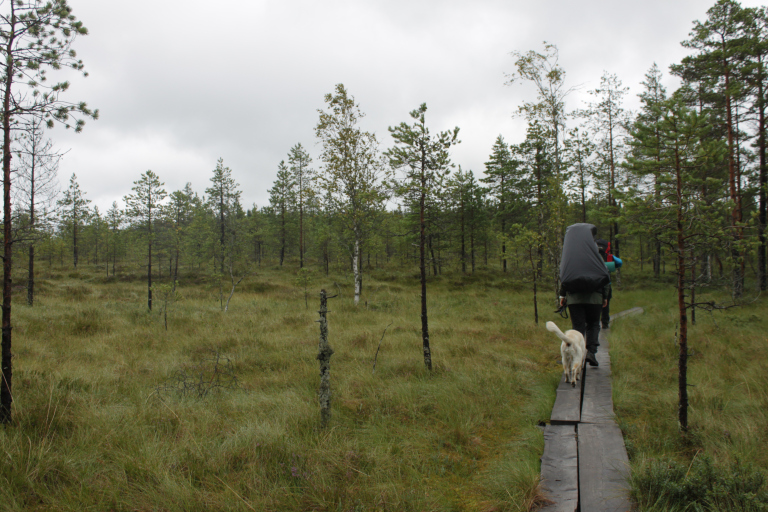 I’ve always enjoyed the posts by Noble & Blue because they are so willing to test the unknown. They buy gear and try to figure out how it works. This is something we should all strive to do, learn.~Mike, Editor.

We had long been discussing and planning a proper hiking adventure to test our gear and our basic adventuring skills. Our original plan was to head out to the northern Finland to Oulanka National Park for a famous 80 km/50 mi. trail called Karhunkierros (loosely translates to Bear trail), but it never came to that due to our vastly different vacation days.

As some may have noticed through our instagram feed, a few weeks back we agreed to finally go on a proper weekend adventure accompanied by Mrs. Noble, Mr. Adventure dog and Noble’s brother in-law. The time to a National Park was a lot closer to us, the Seitseminen National Park, for a two-day hiking adventure. I’m actually very glad we didn’t go straight for the 80km Karhunkierros in Oulanka, because as reality would have it, we would learn a lot about our gear, clothing and ourselves in the short couple of days we spent on the trails of the park.

If you wish, you can check out the trail map of the park linked HERE and maybe try to keep tabs on whereabouts we are along the story. Pictures are somewhat in correct order from the day, but we couldn’t snap too many pictures thanks to all the rain. Any how, we hope you enjoy reading this!

The Saturday morning rolled in and I was up early to have a sturdy breakfast before my first longer hike ever. I had been contemplating hard in my head whether I was even fit enough for this hike we were about to take on and how I was going to endure it. My mind was wandering, thinking if I had packed everything necessary and as little extra as possible and what if I bust my ankle on the trail or get an asthma attack? And it was supposed to rain for the whole day too. I was very nervous to be honest.

The gang was to come pick me up around 0930 hours and then we’d have an hour-long drive to the Seitseminen National Park. A message from Noble came in to interrupt my nervous mind. “Running 30 minutes behind our schedule”. Okay. I decided to use the extra time to try to clear my head, so I put on the Rio Olympics and decided that if I hadn’t packed something, I wouldn’t need it. Or so I hoped. 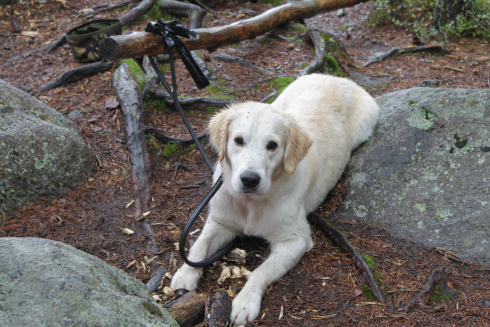 After all we left the city around 1030 hours and arrived to the National Parks nature center around 1130 hours. We made some map and gear checking, light adjustments and finally headed to the wood around 1200 hours with light rain dripping down on us. The temperature was around 15 degrees celsius.

The normal hiking direction on the park trails is counter-clockwise, but we decided to go clockwise instead. We headed down to the woods following the trail marks of the red marked Seita-trail which is roughly 19 kilometers in length. We agreed that we would decide later if we wanted to do the longer 26 kilometer blue marked Virka-trail instead, which conjoins the red trail after about 7 kilometers when hiking clockwise. 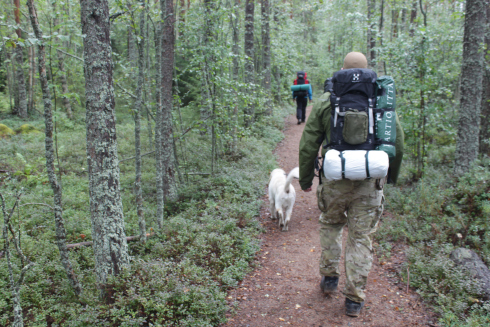 Soon after entering the woods the rain started picking up a little and everyone cursed more or less aloud, but we kept going through the very wet, mainly spruce inhabited forest, which’ tracks were covered with annoying and slippery surfaced tree roots.

A true nightmare for feet and the chances of twisting your ankle or tripping were real. Luckily it wasn’t for long until we reached the first larger mire region and we could ditch the root infested tracks and hop onto the wet and thus slimy and slippery duckboards crossing the mire. It kept raining on but not constantly, so we could enjoy our hike a little more.

After the first 3 kilometres we stopped at Iso-Kivijärvi’s campfire place, took our rucks off and had some food, since we hadn’t eaten lunch yet and it was well past noon. Some tuna, muesli bars, sandwiches and tea to keep us fed and energized until our next stop. It wasn’t raining and there was wind blowing from the lake that we were next to. It was a very nice moment by the lake and the mire we had passed. 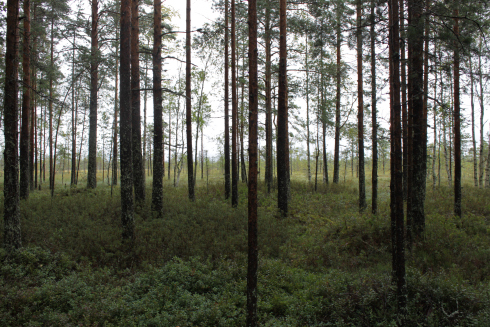 As I was packing some stuff to my ruck before leaving Iso-Kivijärvi, I felt and heard a buzz inside my pants, at my lower inner thigh to be exact. Nope, not my phone on vibrate down there. Sudden chain of thought: “It has to be a bee. How did it get in my pants?! Why is it in my pants!?”. So I panic swatted my inner thigh at the region where I felt the buzzing. Nothing. Then a sting. GUDDUNNIT! I swat again a few times and shake my trouser leg. NO bee to be found, but no more buzzing at least. So I checked my thigh behind a larger rock and yes, a sting mark right where I felt it. Luckily I’m not allergic to bees and this was more annoying than anything else, but just in case I took one of my allergy medicines.

So we headed out off the mire and into the woods,another 2 kilometers through some more root infested, wet and muddy paths in varying degrees of rainfall. Finally we hit a solid dirt road that is part of the trail, only for about a kilometer though. It was only about 3 kilometers after our first stop when we decided to stop briefly at Pitkäjärvi campfire-site to have some more tea and energy bars. Not being used to the heavy ruck, the shoulder straps were hurting my neck and shoulders lightly already so a little break without the ruck on my back really felt good. 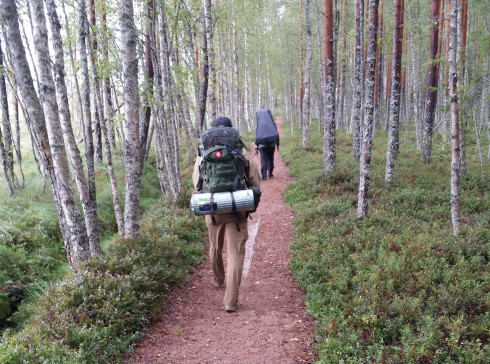 But soon it was time to get back on the trail. I also set up my GoPro on my head and had a gander at filming a timelapse of us tabbing through the woods. It didn’t turn up great when I later previewed it, and somehow most of the pictures somehow self-corrupted when I transferred the material to my PC, so I went and deleted it all.
We had decided that we would go and hike the longer 26km Virkatie- trail(marked blue) and we would camp out lakeside at Liesjärvi which would be around the 10,6 kilometer mark. But it was still about 5 kilometers away and as the luck would have it, our feet would have to endure tons more of the root infested and mud puddled trails plus some more slippery duckboards. 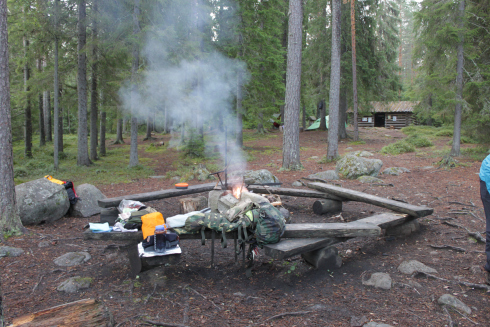 The last kilometres it was rather rainy once again, and you could really feel the rainy day  affecting our whole group. The whole day there wasn’t too much elevational differences on the trail, so we weren’t too exhausted after the hike, which our gps clocked in at around 12 kilometers. Of course our shoulders felt the day of having the rucks on our backs and our feet were hurting from all the roots, and mine were rather wet too, despite wearing gore-tex footwear. Noble’s shoes had been soaked since the first kilometer due to not having gore-tex footwear.

We got to our chosen campsite at Liesjärvi around 1700 hours and took cover from the rain in the sites firewood shed and ate the last sandwiches and some nuts until we could get out to the campfire-site to cook. The rain stopped around 1800 hours so we could put up a fire at the campfire site for some drying and warming up. Not that we ever felt cold during our hike, but since we weren’t moving anymore, you could feel the developed warmth disappearing. It was pretty much dinnertime too, so we popped out the trangia and boiled some water for our outdoor meals and pretty much devoured them. We really needed all the energy we could get after the day’s hike in the rain. 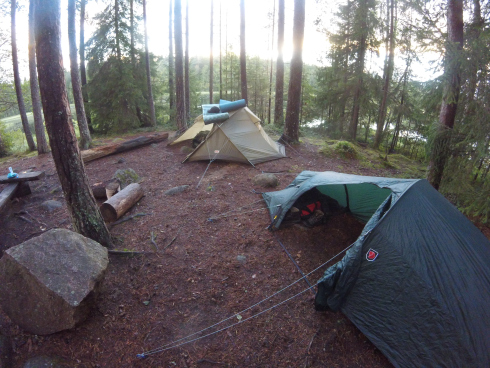 And to our luck the skies cleared and we could enjoy a little more of the late summer evening sun which was still well above the treeline as we started popping our tents up. If I recall, we went to sleep around 2100 hours and decided that we’d get up at 0700 hours at the latest and would try to leave around 0800 so we could make it through the trail before the predicted thunderstorm in the coming afternoon.

I was pretty proud of myself since I made it through the day quite easily despite my doubts. But even still, my mind was set on the next day’s hike which would be longer and on tired feet from today’s hike, and a race against the clock if we wished to stay dry.

So there I was, laying in my sleeping bag, in the wild, tired and proud, awaiting the next day’s adventure. I fall asleep.

– TO BE CONTINUED SOON