As they say, the truth will set you free!! Nowhere is this freedom needed more than in the field of physical fitness training. Fortunately, the truth is not so difficult to find, especially when armed with a massive, foot-thick dictionary from 1946 and the oracle at Google! In this case, we are using language to trace the origins of the modern state of physical culture in the Western world. Before we jump in, I need to make it clear that this is meant to be a 10,000ft overview and a focus on some critical vocabulary. Hopefully it will stimulate you to do your own research into this fascinating subject! 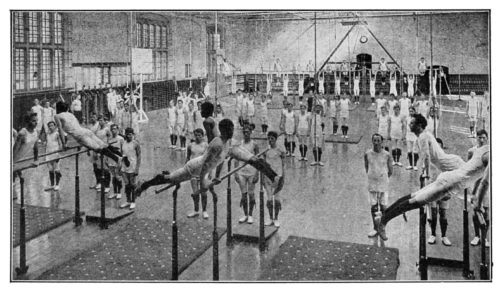 The first word we must learn the old meaning to is “Gymnastic”. This word is critical to understanding a great many things. Let’s see if you pick up on them.

First, let’s begin with the word gymnastic itself. It is composed of two words, “gym” and “nastic.” “Gym” is short for gymnasium which is the place where gymnastic exercises are performed. Nastic means “short-breathed.” Thus, gymnastic exercise is performed in a gymnasium and makes you short of breath. Then there is the official definition:

Gymnastic, 2., plural. The art of developing by means of gymnastic exercises, bodily strength and agility : in modern usage referring more especially to exercises in a gymnasium as distinguished from athletics, exercises in the field.”

AGILITY, 1. the quality of being agile; quickness and readiness in movement; nimbleness.

This is a critical point of understanding. Gymnastic exercise is designed to impart the qualities of strength and agility to body movement. This, of course, is of great value to athletics or is simply a great way to maintain some level of physical performance and health.

As modern gymnastics evolved, it split into different sub-groups. As it did so, it also abandoned the obstacle negotiation focus it once had and the agility component, where it was retained at all, was highly specialized. Heavy gymnastics involved strength training with various apparatuses to include machines, clubs, rifles, kettlebells, barbells, dumbbells and more. Heavy gymnastics evolved into weightlifting and completely abandoned the agility component. 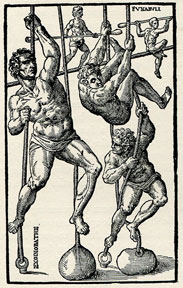 Light gymnastics came to become known as calisthenics and floor exercises. Primarily developed for women, light gymnastics excluded the use of any apparatus and have no agility component. Acrobatics focused on highly complex and technical routines performed on rings, bars, ropes and other apparatus but excluded strength training tools used in heavy gymnastics.

Acrobatics focused on highly complex and technical routines performed on rings, bars, ropes and other apparatus but excluded strength training tools used in heavy gymnastics. technically speaking, modern gymnastics as seen in the Olympics is actually acrobatics. Furthermore, they are also collectively upper acrobatics as they are upright or suspended. 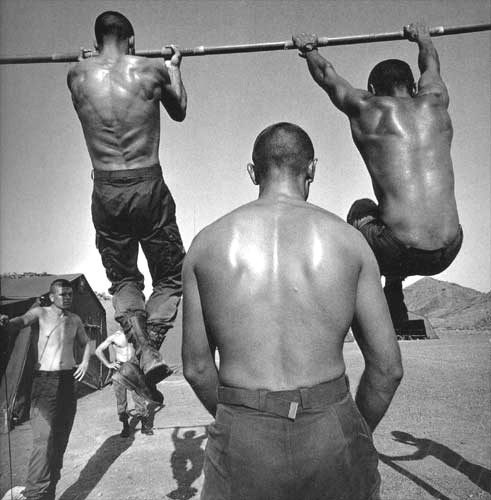 Lower acrobatics do not use apparatus and are composed of complex and technical body movements on the floor or ground. The highest lower acrobatics go is the standing position. Other names include ground moment skills, grass drills, guerilla drills, ground engagement drills, and individual movement techniques. They are a central component of many martial arts and many types of modern dance. Lower acrobatics differ from floor gymnastics as seen in the Olympics. Also called Rhythmic Gymnastics, these are performed on a specialized floor apparatus and the contestants remain predominantly upright.

What do all of these sects have in common? They are ALL gymnastics! They also exclude most locomotion, throwing, catching and manipulating objects (other than weights) as those are the domains of athletics. And yet, gymnastics and athletics cross over in many instances where gymnastic events are considered sports. The key difference of classical athletics is that they stressed locomotor and fighting (running, throwing, fighting). Classical athletic sports were complex, dynamic, often had a team component, required tactics and strategy and so on. Gymnastic sports like weightlifting are raw expressions of single attributes such as maximal strength or acrobatic skill on a set of rings. They also have little carry over to the real world or classical athletics, whereas classical gymnastics did.

It is also worthy to mention that classical gymnastics in the Greek era also involved intellectual development. The Greeks strongly believed that the mind and body must develop together and I for one agree 100%.

So where does that leave us today? In a word, confused… But with this knowledge, you will be able to begin seeing through the smoke and the fog of the “fitness industry” and understand why I label and classify activities the way I do. It all comes back to the original meanings and when you see it in that context the world feels right again, if only for a moment.

1 thought on “Important History – What is Gymnastics?”