During Operation Desert Fox Woody and I were attached to an army SF ODA (594/572) AND we drew out vehicle mounted VHF and HF radios and man portable UHF and Satellite radios. We were issued a PSC-3 satellite radio, but the Special Forces teams would be on a PSC-5.

The MEU (Marine Expeditionary Unit) we were detached from would not provide us a PSC-5, therefore the army had to. At about 20:00 (8pm) we were instructed to drive over to a warehouse, on Camp Doha, just North of Kuwait City. Woody and I arrived at the warehouse and a very nice army Colonel was waiting for us. He was standing outside freezing in the cold and wind. He did not have the keys and was waiting for the warehouse supervisor to show.

When he showed up Woody had to hit me to stop me from laughing out loud. This American civilian shows up in cowboy boots and hat, no problem, but the riding jacket (opening in the back) was a bit overboard. Anyway, this civilian was showing as much disrespect to this Col as humanly possible. I told Woody, I am going to jack this dude up if he pulls that crap on us. He did not.

He showed us total respect, but continued to treat the Col like crap. I asked the Col why he allowed that to happen and he said, “SSgt, you are lucky. Unlike the Marine Corps, the army was dumb enough to allow civilians within their chains of command and they could care less about rank or authority.”

I asked the Col why he did not mess with us? He said, “because he knew you were Marines and he was afraid you guys would beat his ass.” The Marine Corps did make the same mistakes a few years later.

Photo: ODA DMMWVs (Desert) and our POS green HMMWV. We broke three HMMWVs in a matter of days. I blame Jay Woodfin 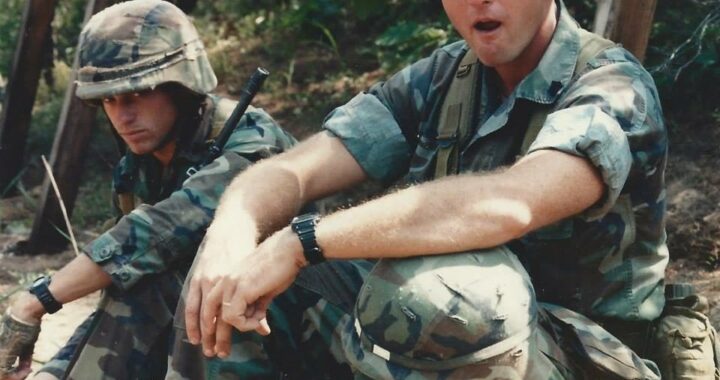