If you’re looking for a passable spy thriller and like old movies than the movie Target with Gene Hackman and Matt Dillon might keep you intrigued for a few hours. Gene Hackman has always been an actor that hits his marks on screen. As spies go on film he’s not super sexy like Sean Connery, muscular and tough looking like Daniel Craig, nor is he super confidant like Tom Cruise but what he does have is the Joe Everybody “look” and it works effectively for him to blend in. Give Hackman a good director and script and you might have a winner. Honestly, this movie is not a winner but it should be watched simply to see Hackman act and see the difference in his acting in Enemy of the State; such a difference. He seems more focused, tougher and badder.

Arthur Penn, director of Bonnie and Clyde and Night Moves made this movie for CBS. Unlike many polished films that come to the theater today that open up with lots of explosions this movie does not. The film opens up plainly in order to show how boring Hackman’s character Walter Lloyd is. Walter runs a lumber business while his college-age son Chris (Dillon) works repairing stock cars. Soon we get get to see Walter in action. 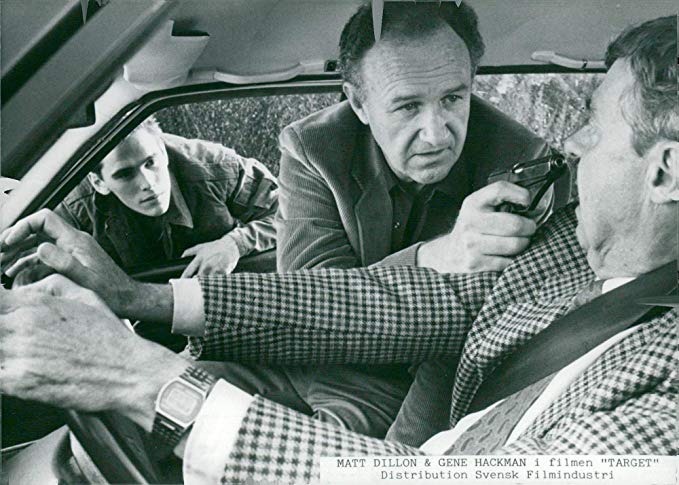 The intro allows viewers to see cars, apparel, and buildings from the 1980’s. The movie came out in 1985. Movies that came out in 1985 with Target were the Breakfast Club, Rambo II, and Deathwish III. For those with keen eyes and they will get to see a triangular Wienerschnitzel building in the background and lots of boxy looking cars common for that period of time. It’s interesting to note the kinds of cars used for the pursuit scenes.

His son Chris played by actor Matt Dillon thinks his dad is just a boring, old man. Little does he know that his dad is an accomplished ex-spy who once worked for the CIA. Hackman’s characters always blends in with the crowd of any movie that he stars in and this works to his advantage in movies such as The Package and the Enemy of the State.

The movie begins with Chris’ mom leaving for her trip to Europe. Her kidnapping is where the story of their teamwork comes together. Soon after her departure to Paris the two are awoken by a late-night phone call telling him that his wife is missing. After the phone call Walter pretends to be calm but Chris can tell his father is freaking out. Walter has a drink and Chris tells him that he knows the only time his father is nervous is when he is drinking. The two go to Paris to find their missing family member.

Once in Paris Walter is stopped by a man with a gun. In this scene the man dies, and Walter manages to get away with the man’s weapon and this is where his son Chris begins to ask questions. Who is his father?

I give this movie 2.5 stars out of four. Honestly, the talent is great and Hackman hits all the right notes. Dillon comes off as a kind of whiny teen and annoys us even where the movie falters in the second half. What starts out with a great idea ends with a laughable ending with the mother wired to an exploding chair. What was the director Arthur Penn trying to do? Was he trying to make a great action movie or was he lecturing the audience about the cold war? He should have decided this before shooting a single frame. We get to see the makings of a good movie. The movie has some interesting car chases, some good banter early on but the shootouts are poorly done, and the foot chases are confusing. If you like old spy thrillers maybe this one is for you.