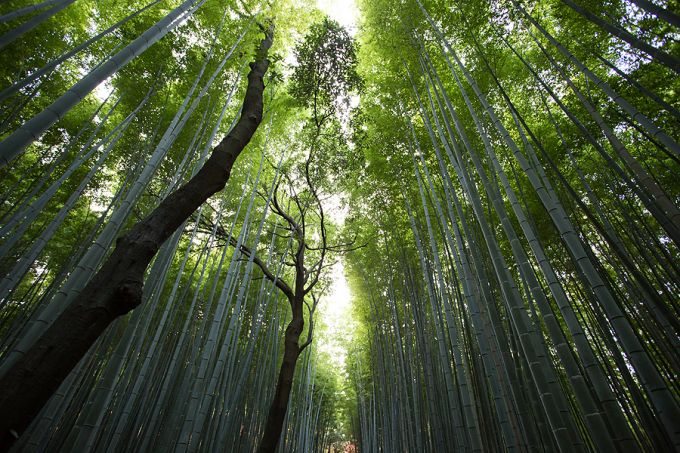 If your girlfriend runs ultras, and you run ultras, and she says to you “let’s go for a run, I have the afternoon off,” is there not a better idea than to load your pack, surprise her with a campfire, trails to incredible views, and what in my case turned out to be, as she put it, the best date ever? Of course not! Sometimes ideas like this come out of nowhere and we either listen to them or we don’t. This time I listened to the idea and I am grateful — so glad! — Was I prepared for it?

I live in Northern California along the coast. It doesn’t take long to access trails with green, or brown, rolling hills, ocean views, and dense forest. On this particular day it wasn’t really advisable to be outdoors, but with the storm passing, the idea of a responsible fire up there seemed a great idea. I loaded an e-tool, my bivnorac from HIlleberg, a wood chopping knife, some kindling, med kit, a tarp of course, Patagonia rain jacket, a loaded wineskin, and a small sundry of other negligible stuff. I pretty much packed into my ruck whatever was at hand, confident about our trek. 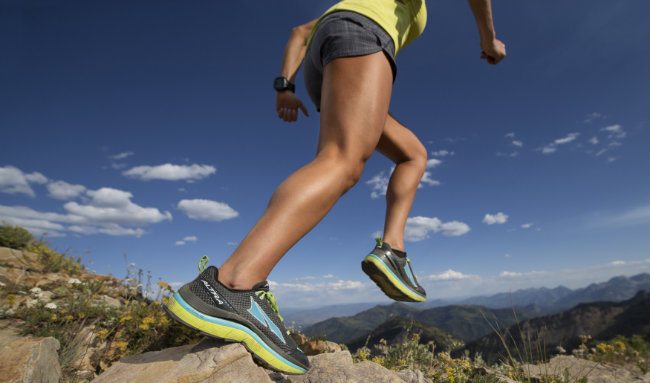 The Gear
The pack weighed about 25 or more lbs though because the only tarp I had at the time was an oiled canvas made of cotton duck. Once she showed up, both of us full of food and hot tea, we headed out the door and toward the hills. Where I took her was just less than 2000 ft. We dropped just below that, down a windy road, another one, and finally parked along a dead-end mountain road. Let’s go for a run.
The Journey
We headed out around noon. All I wanted was an easy run. We were supposed to go out on a trail I knew from a year ago that led to a nice vista, overlooking the ocean, have a fire, a little cheese, bread, and vino, then a slow jog back to the car. Hey, we’re not on a track here. And this is not competitive running! 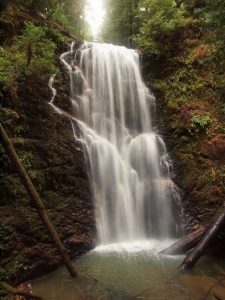 I actually like to call it utility running. Utility running is simply running somewhere to do something, doing the thing, then running back. I’ll often run for miles in non-running shoes and blue jeans. So this was a utility run par excellence. I planned to dig a hole in the ground for safety reasons, even if it was supposed to be raining, pitch a lean-to, and enjoy an exclusive spot in the forest. First problem was, I couldn’t find the trail from a year ago. It was grown over or we dropped onto the wrong spot. It wasn’t there… I think we started off wrong, but we kept on running anyway and it was a good because we found a waterfall. It was perfect for safety reasons, not to mention the fire pit already there — and we camped out for a couple of hours. Seeing it was nearly 1600, we began striking and headed out about 1530. Sunset wasn’t until 1645 so we had plenty of time. My memory was faulty and I was relying on that rather than training.
Lost
On the run back we had a great time. The campfire turned out so good — no heavy rain, the waterfall, the exclusive spot — we were in great spirits. Ok, the wine may not be such a good idea for even a short run, but we could take it. It was worth it. We ran, however, past our trail. You see, where we went was outside of a park. We were in the mountains where trails dipped in and out of park space, and there were trails all over the place. What needed to happen was as we ran in, we’d normally mark the trails, but we didn’t do that this time. We ran and ran until we ran up a trail we were sure was our ticket home. We’d make it to the car and have a killer meal ready for us: a huge home-made burrito. After a few miles of climbing trails we saw a yellow dozer. There wasn’t a yellow dozer on our run downhill! We would have seen it! Oh man, and this is where the saga really began. We left around noon, stayed until about 1630, and ran trails with one of the sundry items I kept, a jolly rancher sized LED flashlight, until about midnight. Our run back went from good times to survival situation pretty fast.
We stayed in good spirits though. We really had no idea where we were at this point. We were of course making the best of sense we could, but were pretty much lost. I gave in a lot, allowing for her the benefit of the doubt. Then I had become more assertive, but was wrong too. We were really lost. We did, however, find some trail signs and started heading towards a ranger station. No one was at the ranger station though, so we went to the next landmark place, a visitor center. From there we phoned a couple of friends and made it out. What a night. If we didn’t have some of the supplies we did have, like her Pro Bar, the morale would not have been as high. 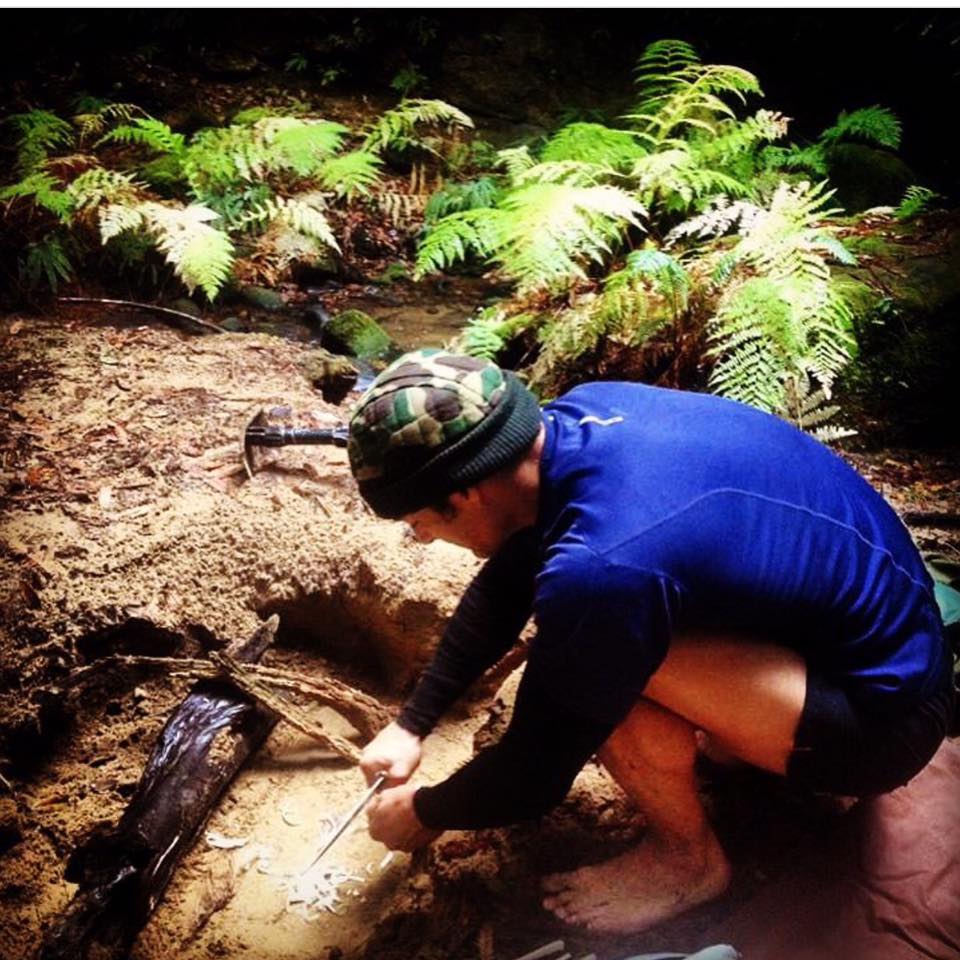 Overall it was great run. It’s good to have these reminders now and again. You know? No one got hurt, we made it home on the same day, we lost no weight. Right? I do have my list of lessons learned though.
In the television series Gilligan’s Island there was a myth that writer Sherwood Schwartz created the series as a metaphor for hell. Gilligan is Satan and foils everyone’s escape attempts through his bungling. On a similar note, other fans believe it was inspired by Jean Paul-Sartre’s Play, No Exit. As well, each character represented one of the 7 Deadly Sins. Sherwood Schwartz said the show was a metaphor for international relations and how the nations of the world have to learn to put aside their differences and work together. 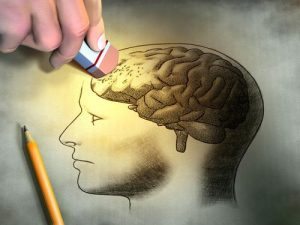 In this particular case one of us was very confident about believing the pathway out was known. The reality was the pathway out wasn’t known. It’s good to slow down, work together and not bumble through things or the problem can get worse. I’m open to being corrected.
You can pack all of the survival stuff in the world into your pack and be weighed down. Or you can pack the proper gear for the particular event. Sometimes it’s using something as simple as a dime sized LED light to guide your way. Keep a few simple things in mind, keep a good attitude, and don’t get cocky with your base of knowledge. It just might be your partner who finds the solution. Work as a team.
Enjoy your run!
[jetpack_subscription_form]