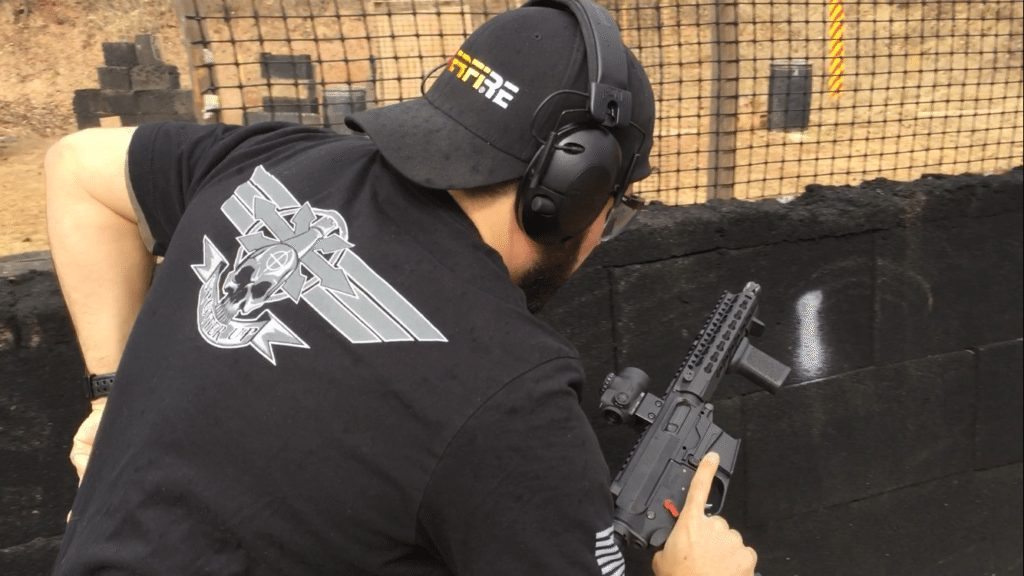 The Spotter Up shooting team is largely based in Northern Virginia, and we will be attending local action shooting matches in the DC area throughout 2017. If you have ever thought about getting into a shooting competition, I highly encourage you to give it a try. It’s a very easy sport to get into, as the shooting community is extremely welcoming to new shooters who will grow the sport, and all you really need is a pistol, holster and at least 4 magazines. Matches are not prohibitively expensive (~$20 usually) and Match Directors and Safety Officers are always happy to help newbies have a fun and safe time.

I shot a U.S. Practical Shooting Association (USPSA) match last weekend using my Pistol Caliber Carbine (PCC) and as always, I learned some things. I took third place overall which is respectable out of 40 shooters, but of course there were many ways in which I wasn’t please with my performance and using video diagnostics of myself and my peers I can identify places where I can improve. In USPSA scoring is based on a calculation called Hit Factor (HF), which for the sake of simplicity we will define here as points over time, or just a combination of accuracy and speed. The final scores for this match are posted below, you can see myself in third place, with my overall times and number of hit in the A, B, C and D zones of the targets. I’m going to compare my scores against my friend Jordan who was also shooting PCC, and who won the match.

Shooting PCC to me is a bit like cheating, in that you have a highly accurate platform with 4 points of contact which you can shoot much faster than the average handgun shooter. So really my only competition was other PCC shooters and the very best pistol shooters. My PCC is a 9mm short barrel AR platform that accepts Glock magazines. I built it myself using components from a company called QuarterCircle10 which you can find here. Below is some footage of my runs through a few of the stages.

Here is footage of Jordan running through some of the same stages. Aside from the size of the barrels, do you notice any big differences?

Jordan is an overall better shooter than I am to begin with, he is generally both fast and accurate, and he moves around the course quicker than I do. That said, he only beat my overall time by about 4 seconds, out of a total time spent shooting of 75-80 seconds. Those 4 seconds matter, but I likely could have made up that time by doing quicker reloads and simply being quicker on my feet. My reloads need a lot of work, which is something that I didn’t notice until I watched the videos of myself, so that on the “must practice” list.

Where I really lost my points was in the accuracy department. If you look at Jordans’ scores, he has 90 shots in the A zone of the targets and only 8 shots in the next biggest ring, the C zone. By comparison I have 75 A zone hits and 17 C zone hits. Considering my slightly slower times that translates into a significantly lower score for me.

So what can I learn from this? Well I already know that my reloads are a weakness for me, but that easy enough to practice at home during dry fire. Is my equipment part of the problem? Not really, no. Jordan may have some small advantage to having the extra length out front to more easily drive the carbine from target to target, and a lighter competition trigger may make accurate controlled pairs easier, but those aren’t the reasons Jordan beat me by such a wide margin.

I believe it is simply a combination of practice and focus.

Practice. The more practice I do with the carbine ie. shooting while moving, transitioning between targets etc, the more I will build muscle memory and my body will perform those actions faster and more efficiently under stress. Specifically I need to practice bringing the carbine to my shoulder from the start position and acquiring a sight picture to get that first shot on target more quickly. I also need to practice keeping the carbine shouldered during my reloads, so that I can get more ammo into the gun without having to dismount the stock from my shoulder and reacquired my sight picture. These are weapons manipulations that I can easily practice in my house using dry fire methods. With practice, I will be able to shoulder the carbine, achieve my sight picture and break my shots where I want them, faster.

Focus. The better my focus is during the match, the more likely I am to perform to a higher standard. Watching Jordan shoot, you can tell that he is going over his stage plan before he gets up to the firing line. He practices movements, and thinks about his actions and shooting order. It’s clear that he is preparing to execute a predetermined plan as he walks up to the shooting line. This is where the competition mindset comes into play. You have to get in the zone and visualize what you want to do, then execute it. This can include every movement of the stage, including exactly where you are going to stop moving so you can engage the maximum amount of visible targets, and planning reloads during movement to maximize time spent engaging targets. Sometimes I have to do this with basic shooting fundamentals, reminding myself to grip properly with my support hand and get the correct sight picture before breaking the shot.

I need to mentally prepare myself better in the minutes leading up to my stage runs. I have to work on visualizing my stage plans and executing them better, and I also need to make sure that I am practicing my fundamentals, ie. solid points of contact, aggressively driving the gun into my shoulder and the sights onto the target. One of my problems sometimes is that I simply get lazy with the carbine platform and expect it to shoot itself because it is inherently so accurate, but that is just a failing of me doing my part to get rounds on target quickly. You can’t be lazy or sloppy with your fundamentals and still expect to perform well, which is something I am guilty of at times. You can almost even see that in the videos comparing myself to Jordan.

Shooting sports are a lot of fun, but it takes a lot of dedication to get a higher level of skill. This article is a simple look into where I am right now with one discipline of one game. Hopefully this is insightful to other shooters, or it gets shooters interested in competing if they have thought about jumping in and haven’t pulled the trigger yet.