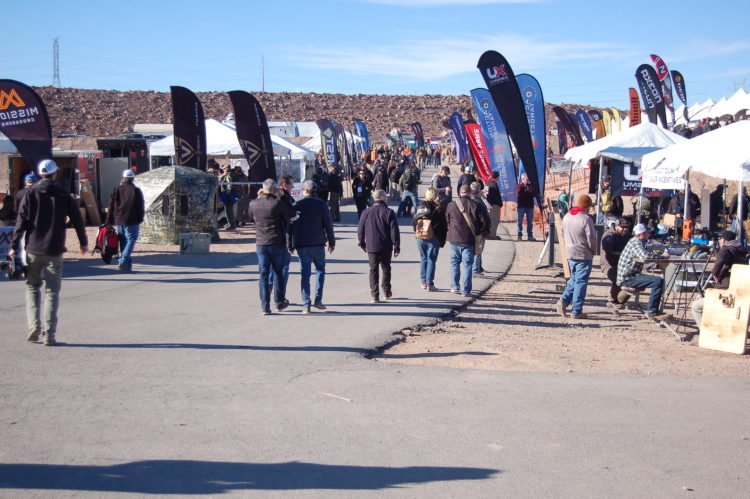 It’s been a few years since my last visit to SHOT, and I wasn’t actually planning on going this year, but the opportunity to go to media day on the range was an enticement I couldn’t pass up. As always, there were plenty of new handgun makes and models, an assortment of AR-15 type rifles in every conceivable configuration, bolt guns to demonstrate ammo, optics, stocks, and triggers, and an assortment of other guns.  I shot plenty of handguns and carbines, but I primarily focused mostly on precision rifles and accessories.

Some items of special note this year:

Springfield Armory’s 6.5 Creedmoor M1A: It shoots like your typical M1A, reliability was perfect, recoil was maybe a little lighter than the standard 7.62 NATO version. To get the most out of the 6.5 Creedmoor cartridge, optics are going to be a must, and scoping the M1A can present issues. With one of the M21 or M25 style actions available that integrate scope mount rails into the receiver, the 6.5 should give the M1A some added precision and a few hundred more yards accurate range.

Speaking of 6.5mm cartridges, Freedom Munitions had their new ProMatch ammo available to try out.

I also had a chance to fire Hornady’s new 6.5 PRC (Precision Rifle Cartridge). This round reportedly bests the Creedmoor by about 300 FPS, but that extra velocity comes with a recoil penalty. It’s not bad, it’s about like a .308 Winchester, but maybe a bit sharper. It’s something to keep in mind before you zero in on this cartridge for a recoil-sensitive shooter.

HIPERFIRE Triggers had a great range setup complete with their various trigger models and new accessories like their ambi charging handle. They have made some improvements to their already excellent triggers that will improve reliability, service life, and ease of installation. They also had an AR set up for the new .224 Valkyrie cartridge, which I have been anxious to try out. It was very mild to shoot and based on the various products already being made to support this cartridge, from barrels to bolt heads, I suspect that the .224 Valkyrie is here to stay.

Although not precision-rifle related, I checked out a number of delayed roller-locking firearms.  Even though I have some horror stories with HK clone builds, they are a guilty pleasure of mine.  I have a tendency to wind up with examples featuring canted triple frames (front sight towers), which seems to be a common theme with HK clones.  This is a particularly frustrating problem because the triple frame is pressed on, drilled into the barrel, pinned, and then welded, so it’s not an easy fix to straighten them up. I am happy to report that I inspected all of the Zenith Firearms on display and they all looked straight, which I then verified by putting rounds down range from their 5.56 and 9mm builds… all good to go. They also mentioned having a .300 blackout conversion they can perform, which is kind of exciting if you’re a blackout fan.

I won’t name names, but some of the other HK-clone firearms on display this year actually had visibly canted triple frames. Caveat emptor, if you like delayed roller-lock firearms, make sure the manufacturer has a rock-solid guarantee, and know that if you tinker with it or have modifications performed, that’s going to void your warranty and you will be SOL, ask me how I know some time…

I was really interested in some of the new bolt guns available, and a name that is growing is Bergara. These use M700 pattern stocks and triggers, but proprietary barrels. That said, there is nothing wrong with the factory stocks these rifles are equipped with, and they use Triggertech triggers which are awesome in my opinion so… they basically need optics and ammo and they are ready to shoot. I put a few rounds downrange from one of their rifles and had no complaints. Their prices are also very competitive. Keep your eyes on Bergara. 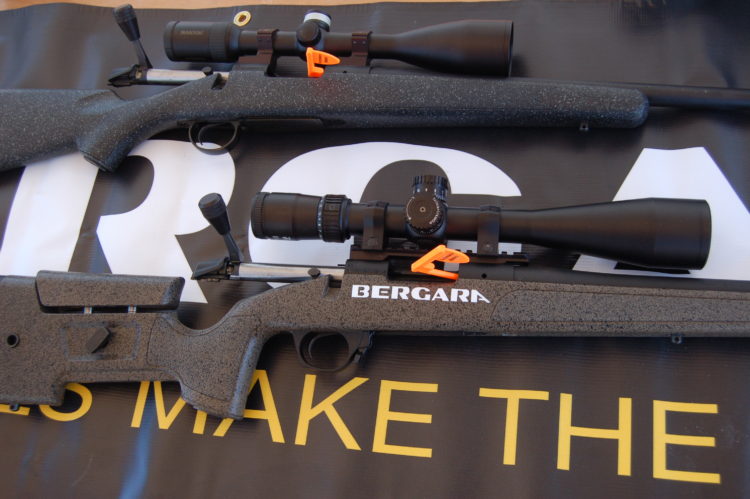 Supressed Weapon Systems are doing some innovative stuff incorporating a monolithic suppressor and lightweight, “finned” barrel into a barrel body. 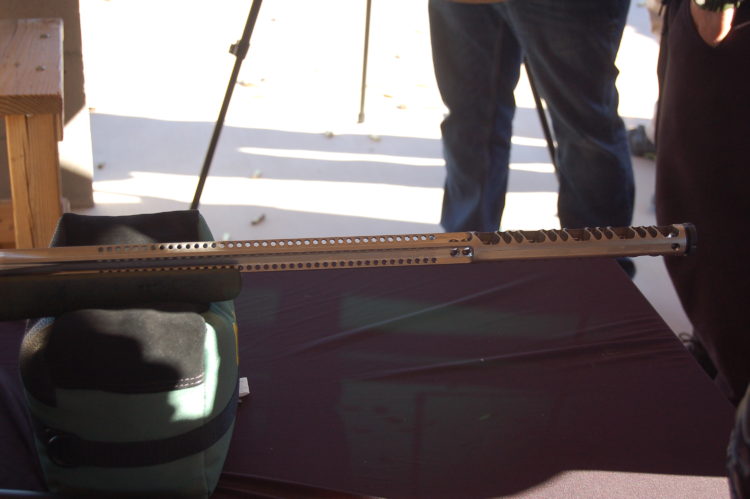 One potential consequence of integrally suppressing a center-fire barrel is that sooner or later, depending on your shooting habits, the barrel throat is going to get burned out and then (if you are a private citizen), you might be looking at a new stamp to replace the barrel – if you want to keep the rifle configured the same way. Now, I’m sure SWS has thought of this, they probably have a way to replace the barrel mono-core and leave the barrel body, or outer tube intact. In any case, SWS integrally suppressed barrels are light, quiet, and accurate.

I checked out a few other suppressor companies. I’m heavily invested in Ops Inc./Allen Engineering pattern suppressors and have no issues with them… light, strong, VERY quiet, and their reflex design offers superior suppression with minimal overall length added to the barrel. They are a baffled suppressor design (like most) which increases backpressure in the action. As a southpaw, with semi-auto firearms this means a lot of gas blowing out of the ejection port right in my face. Mostly it’s not a problem, but I’ve always wanted to suppress my LRB Arms M25, which is a precision M14-pattern rifle. Despite being piston-operated, these are notorious for blowing gas in your face when suppressed. The baffle-less OSS design significantly reduces backpressure. The first models were expensive, comparatively heavy, and as I understand, not the quietest cans. Their updated cans are lighter, less expensive, and based on my experience with them on the range offered adequate suppression without a lot of gas in my face from the ejection port. I think these may be the answer to suppressing the M1A/M14. I talked to the reps about making a mount for the M14 barrel thread and their .30 caliber model will probably be my next suppressor purchase.

I spent a lot of time comparing various optics. I like first focal plane, illuminated optics with mil reticules and .1 mil knobs. I scrutinized Nightforce, Leupold, Eotech’s new Vudu, Vortex, Burris, Kahles, and a few others. Nightforce’s new 1-8 FFP is really, really cool. I have a few 1-8 Minox ZP8’s, and while these are a very functional optic with clear glass and nice features, the Nightforce gives them a run for their money. Leupold’s Mk5 has some good features as well, and is available FFP, Illuminated, mil/mil for less than Mk6 or Mk8 pricing. Eotech’s Vudu uses Japanese HD glass, and has good reticle options with capped windage turret and nice locking adjustments on the elevation. Vortex’s PST second generation scopes offer clearer glass than their first gen PST scopes. I like their reticles and I prefer reference lines on the elevation knobs to zero stops – personal preference – which the PST gen 2’s offer. These give you probably 80%-90% the performance of the Razor 2 HD scopes with less weight and a better price. I was really anxious to try out the new Kahles 3-18 optic. These are more expensive than their 6-24 version, but according to them it uses better glass than the 624i and is a higher performance optic. I’m already a big fan of Kahles optics, they are on the expensive side at around $3000 plus or minus depending on model, but they are a good example of getting what you pay for.

American Rifle Company was showcasing their new Nucleus action, which is an upgrade in most respects from their Mausingfield action. The designer, Ted, still considers the Mausingfield a superior action, mainly because of the stronger Mauser-style extraction, but the Nucleus extractor is still over-engineered and it incorporates the same Springfield-style inertial ejector as the Mausingfield. Both actions fit in M700 stocks or chassis and take Remington 700 style triggers. The dual-cam cocking mechanism with 72-degree bolt lift is silky smooth and very fast. It doesn’t incorporate an integral recoil lug like the Mausingfield, but that is because their new bar-lock barrel nut uses a special recoil lug.

Available in several thread patterns, it uses very clever mechanics to mount barrels to actions extremely securely without special tools. American Rifle Company’s innovation is changing things. Other action manufacturers are starting to incorporate Mauser-style extractors and inertial ejectors in their designs now. Whereas the original Mausingfield was a non-stainless action that came “in the white” and needed to be DLC treated, the Nucleus comes black nitrided. They were selling like hotcakes, or I should say that people were putting down their deposits so fast that there were saying for every hour someone waited at shot to put in their order, it would delay delivery of their action by another month. It sounds like ARC is going to be busy meeting their orders, but whereas at the beginning when they were using subcontractors to manufacture parts, they now have the equipment to do most of their own manufacturing. The Nucleus is available in left and right hand, short and long action, with interchangeable bolt heads for .223, 6.8 SPC (and .224 Valkyrie), .308, and .300 Win Mag. They are not offering Lapua Magnum sized actions at present.

Bighorn actions are also offering M700 pattern actions that take Savage-style small shank barrels. For the competent basement gunplumber, this breaks most of your reliance on gunsmiths with machine shops to build an accurate rifle.

Magpul had their new folding precision rifle stock on display, and I’m pretty excited about it because it is truly ambidextrous.  The folding mechanism and bolt handle relief are swappable between left and right handed actions.

The folding stock mechanism locks up tight and the stock is very solidly built.  It wasn’t really meant to be a competitive or PRS-type stock, more for field and tactical use.

The last new product I was really excited about is Geissele Triggers’ new M700 1- and 2-stage triggers. I tried them both out and they are everything a precision rifle trigger should be… light, crisp, with minimal overtravel. I can’t wait till these hit the market, but it sounds like it will be a while. They also aren’t available with a left-hand compatible safety lever yet, but reportedly that is coming too.

Like any other year, there are a few new products that have me scratching my head, but for the most part I like the direction the industry is headed…with one possible exception: muzzle brakes. Muzzle brakes are my nemesis. If someone wants to do something innovative, they need to design a muzzle brake that doesn’t pulverize everyone next to you on the firing line, maybe then I’ll change my tune, but for now the only legitimate use I have for a muzzle brake, is as a suppressor mount.

I want to thank Spotter Up Tactical for my admission to the show, 5-11 Tactical, and US Elite for their hospitality, and all my industry friends who hooked me up with interviews and swag.