I first stumbled upon Malcom McGregor’s knives at the farmer’s market that my wife frequents. He has been selling his knives at this location for a very long time. A large, rustic, barn with its stalls, once used to house horses, is now divided into sections for craftsman and farmers to sell their goods. He’s a very personable man, 72 years old now and counting. Malcolm first learned to craft his weapons as a young man. He has spent his life making over 700 knives. Since retiring from the Department of Corrections he spends his time working on his craft. His career as builder is winding down now and he makes just enough to sell at the local shows and markets. He has no interest in expanding this business. He does it partly for commerce, but mostly for pleasure, and he knows a bit about what goes into making a sturdy weapon.

He calls his business, Celtic Rootes. 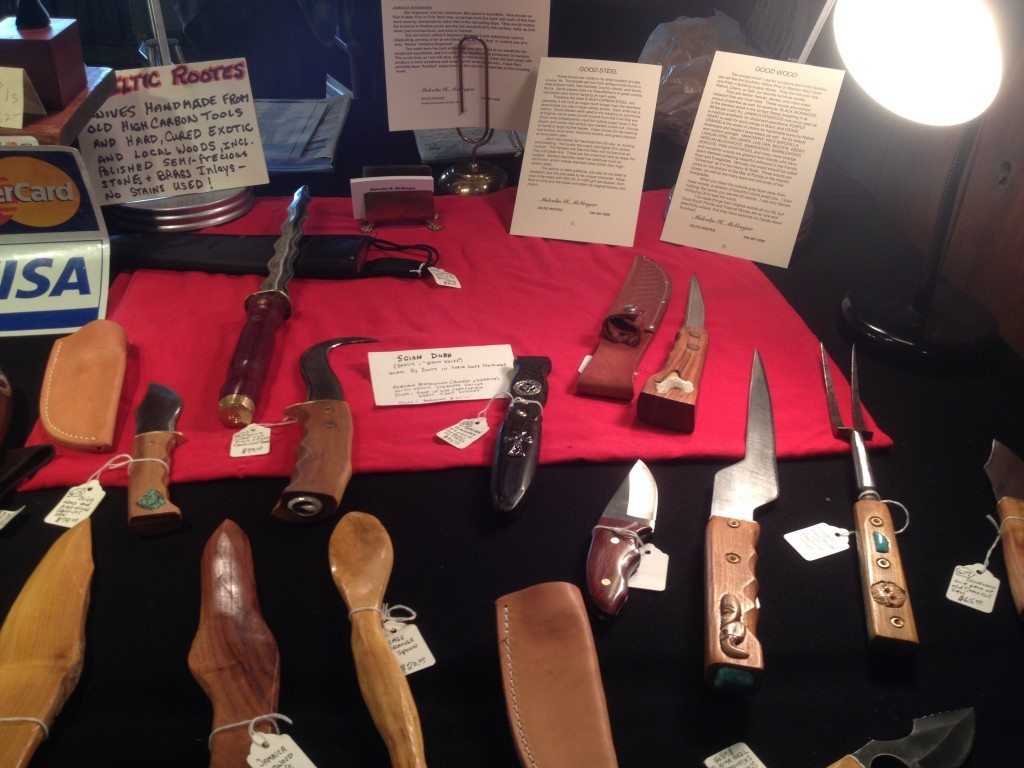 The look of his knives caught my attention because they are crude looking things. Their shape has a certain kind of raw and manly look to them. A few have polished stones affixed to its handle or a metal pommel built into the wood he has patiently sanded. I like them. They are rough looking, not particularly graceful, and lack the smooth, gentle lines that tend to mark an efficient weapon. But does it matter? In the end, his decorative art can kill or maim, and so the knives can serve multiple purposes; a weapon to inflict pain, a piece of art, a death-dealer or a life-saver.

His approach to making them is a lot different from the traditional approach of starting completely from scratch because he sources the blades from antique tools found in antique malls, flea markets, country stores and family farms. Some of the pieces he fashioned out of the blades he took from his grandfather or great uncles. Some were found hanging on barn walls. 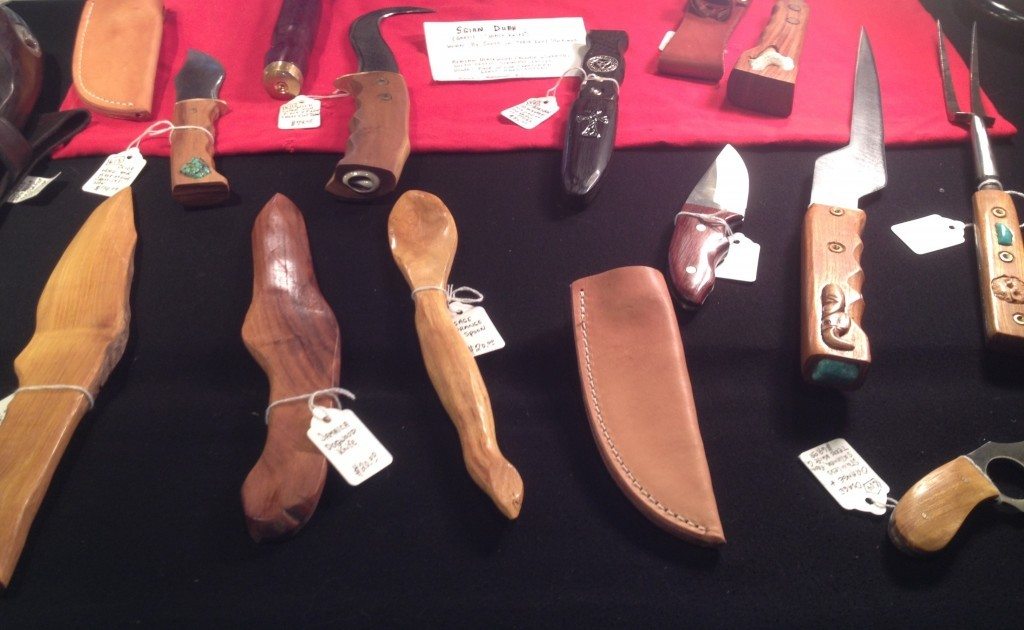 His knives can definitely be handled with a lot of roughness and are very durable. The steel, known as HIGH-CARBON STEEL, is known for its toughness and ease of sharpening. This is something that survivalist and those into bushcraft should seek out when looking for bladed weapons.

Each of his knives has a history. Some of his blades were used to cut the tobacco or cornfields of Virginia. Some were fashioned from cut-off swords from the Civil War era. Some were saw blades or large scythe blades, draw knives for de-barking tree-trunks, bush axes, industrial shears and grass clippers; these have all been used in his constructs. 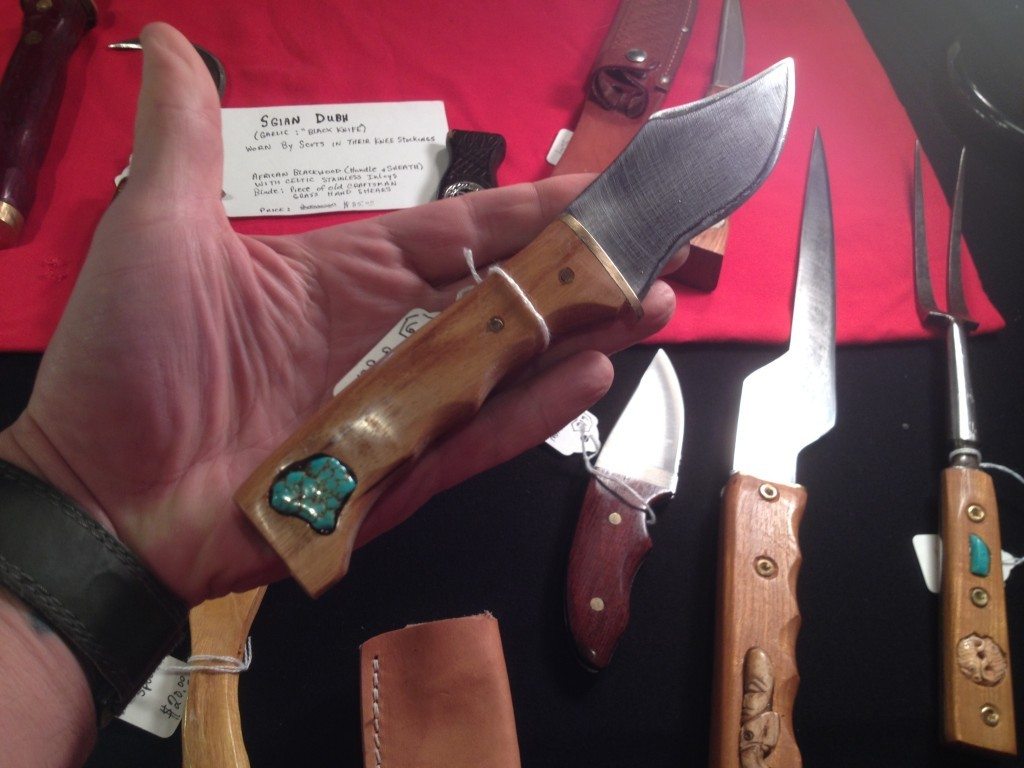 Malcolm is purely on the hunt for well-constructed metal and nothing less. Each was tested for hardness the old way; scoring and breaking. Malcolm’s approach to determining quality is done by listening for loud cracks. The louder the crack, the higher the carbon content. His hardest blades (like his wood files) will not bend at all; they will break first. Malcolm wants high impact toughness and good wear resistance in his blades because they will hold an edge the longest and largely remain durable. Modern stainless steel has additives such as chromium, which makes the steel softer than high-carbon steel.

He uses the best and most beautiful of the hardwoods for his knife handles.

Osage Orange, a yellow heart wood known for its strength and resiliency in making bows. Black Ironwood,  far too heavy to float, because it is 90 lbs/cu ft. It is once of the heaviest American hardwoods. Some of his woods were cured on the bottom of the many bays and estuaries of the Everglades. He’s made things from the Virginia woods his entire life but prefers the South Florida and Tropical hardwoods because they are rare and unique; this lends to their beauty.

For those who want to make their own knives, this is one way to get started. Purists may look at Malcolm’s constructs as cheating, but it is an approach that has allowed him to learn something about knife making. He isn’t starting from scratch but he is continuing an approach that has been going on for thousands of years. Taking an existing blade, and stripping it down to its bones (from its tip to its tang), and remaking it in something that hold his essence. He is re-forging. These contain his personality. His ingenuity is what I respect. He has taken something old and made it into something different; an open mind is just one key trait of a survivalist.

My photographs do not show-off the quality of his work. They are unique; manly, strong looking, and yet beautiful. I hope you enjoy looking at them as much as I do.