Marathon Targets likely impressed me the most of all the displays at Ft. Benning’s 2016 Maneuver Conference.  It can potentially revolutionize our small arms ranges and small unit training up to company level while tremendously increasing our Soldiers and Marines marksmanship capabilities.  Today, unless our troops are given access to very limited and expensive range complexes the only opportunity they have to shoot a moving target is often limited to combat itself.  Marathon’s Smart Targets can change that.

Marathon Smart Targets delivers eight robot targets in a trailer to your range.  It takes one operator to control the eight robots and the trailer serves as a charging and storage facility.  The chassis of each target is armored up to withstand up to 7.62 fire and the life sized mannequin type targets are instrumented to react a variety of ways to hits.  Marathon Target’s proprietary target sensors allow for each target to be programmed to “die” after a certain number of hits or even require specific location hit(s) to the target.  The area instrumented for specific hits aligns with the cylindrical region running from one’s head down to the groin.  These areas include but are not limited to critical hit areas like the brain, throat, and center chest area, areas shooters are taught to engage when trying to stop a target.   When “killed” the robot target drops to a 45 degree angle and stops moving.

The benefits to having moving targets are pretty obvious.  Besides simplifying the logistics of building moving target ranges, providing the ability to shoot moving targets on any range is a huge advantage to our troops.  Shooting a moving target is just exponentially more difficult than a stationary one.  When shooting “movers” one must account for different leads depending on the direction and speed of travel of the target.  Adding varying ranges, obscuring terrain add a whole new level of difficulty and realism to this critical combat skill. 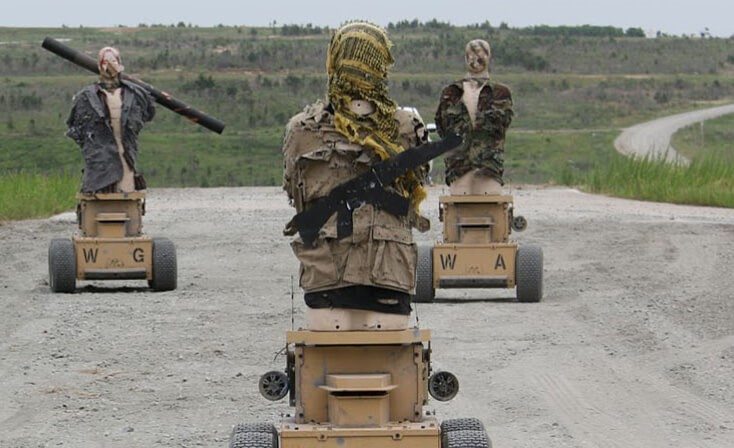 While the Army has been looking at Marathon Targets for some time the Marines have been the most public and expansive in their efforts.  Most of the coverage of Marathon’s robot targets has spoken of the already mentioned benefits as well as adding skills like precision gunnery, discriminatory engagements and shoot to stop type tasks.  Marathon Targets cites, “documented tests and evaluations carried out by the US Marine Corps determined that soldiers developed a 104% increase in combat accuracy within a 24 hour period through use of our robotic targets. In addition, the US Army’s Research Institute measured a 3.7 times increase in range throughput compared to traditional training methods.”   The systems are capable of much more as the Marines found at their Moving Target Engagement Test.

What hasn’t been well documented in the media is Marathon’s Smart Target ability to support extensive and dynamic scenario based training.  Marathon Target’s robot system can field up to 24 robots controlled by one operator and can support training in areas as large as 3 x 8 kilometers.  Before the event a robot is sent out to survey the site using LIDAR.  This includes obstacles.  The data is then taken back and routes and behaviors are planned for the robots that support the training scenario.  The robots also have an automated obstacle avoidance capability should the terrain change from when it was mapped by for example the presence of an individual.

A more stationary exercise may involve dressing the robots as the enemy and others as civilians milling about in a crowd.  After the first shot, the enemy robots can take cover behind civilians or flee the area.  Another static scenario may involve different programmed behaviors for the robots to take if their leader is shot or they start receiving too many or too few casualties.  Envision and automated enemy that assaults you if your aim isn’t that good or withdraws if it is!

Here’s a video showcasing Marathon’s older two wheeled system (less cross country ability).  It showcases some of the fleeting target and hostage situations that can be enabled using the system.  One could imagine how effective a drill with targets coming at you from behind cover might be.

Dynamic scenarios are also possible with the robots moving along different paths and among obstacles.  This supports both defensive and offensive drill type scenarios for the training audience.  Missions like movement to contact, ambush, react to contact can now be conducted in a live fire format with moving targets that react differently depending on the training unit or shooter’s performance.  Supporting after action reviews, a tremendous amount  of data to like when and where the robot was hit to its direction of travel and speed  are captured by the system. 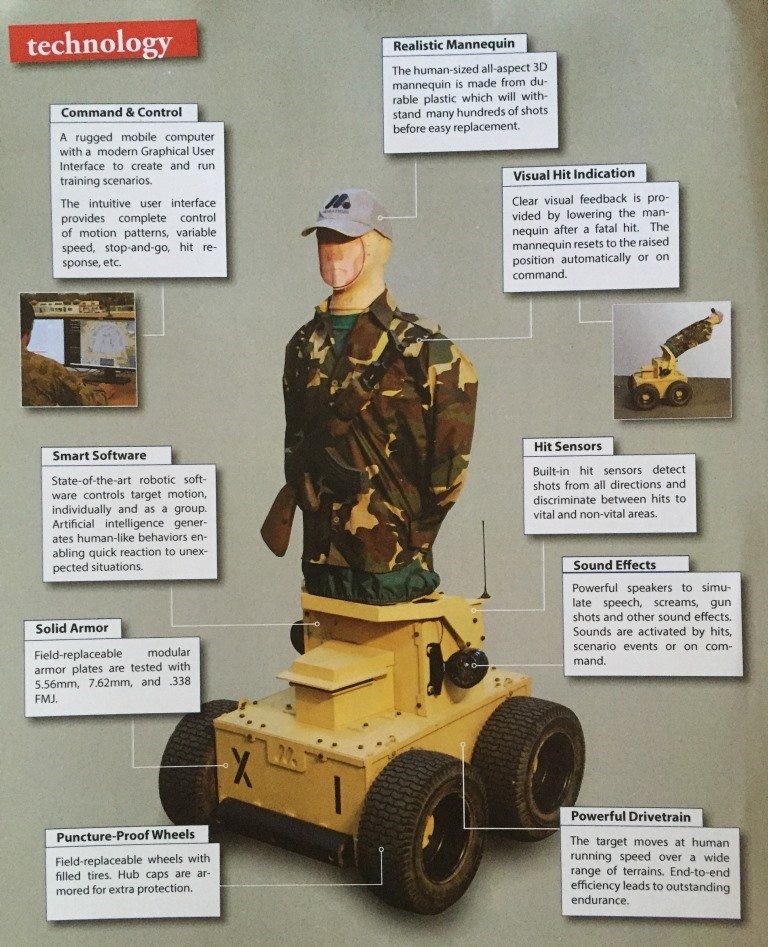 Additional levels of reality are injected by dressing the robots in appropriate clothing and even attaching cutout plastic weapons to create shoot, no shoot situations.  Supplementing Marathon’s impressive target reaction capability (the number and location of hits for a target to “go down” can be adjusted), each robot even has speakers to further add to the realism.  About the only thing the robots don’t do is shoot back, yet…

There is little question that today’s infantryman would benefit greatly from training on moving targets.  The additional capabilities of Marathon Target’s system really offer a new level of training capability.  At first look, the only downside to the system may appear to be its cost which is in the $40/hr range per robot.  Even this objection can be largely overcome by considering this unheard of level of training.  The system though offers much more.  What is the cost in constructing a range facility with multiple moving targets?  Answer?  Millions…  What about the contractors to support and maintain it?  What kind of set up time and reset time between iterations would be required?   What is the cost of role players or OPFOR in force on force training where simulated weapons are used?

When these costs are added up $40/hr starts to become quite reasonable to support this level of training.  I would have given the proverbial leg to have this kind of training capability as a platoon leader or company commander.  Australian Army and Special Operations troops are enjoying this revolutionary capability today.