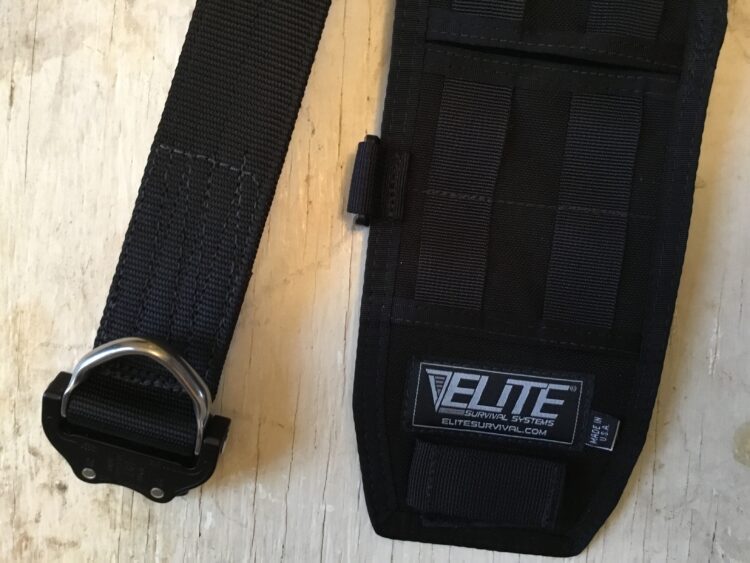 Battle belts have become somewhat of a modern do-it-all kit.  From the original LC-1/LC-2 web gun belt, the necessity for a more agile and adoptive system has evolved into just that – a system which can do multiple things, instead of just carrying a load.  Often overlooked is the fact that the MOLLE style outer belt, AKA battle belt, sometimes also referred to the first line gear, is not really designed to carry a full battle load of mags, IFAK, sidearm, kitchen sink and machete.  I’m always amazed when guys come to training with a slick PC and a completely overloaded belt.  The consumers kind of led the design here, and many battle belts are manufactured bulky due to extra padding, almost dictating to some that they need to be loaded.  On the contrary, the ability to manage whats on the kit or plate carrier and what’s on the hips should allow for modular, mission-driven flexibility.  First line gear, is the gear kept on the user’s person.  Meaning that if the full kit comes off, the essentials are still there.  Aside from competitions and role play, the reality is that there is usually no need for the extra weight, yet we see few effective slimline yet comfortable designs. 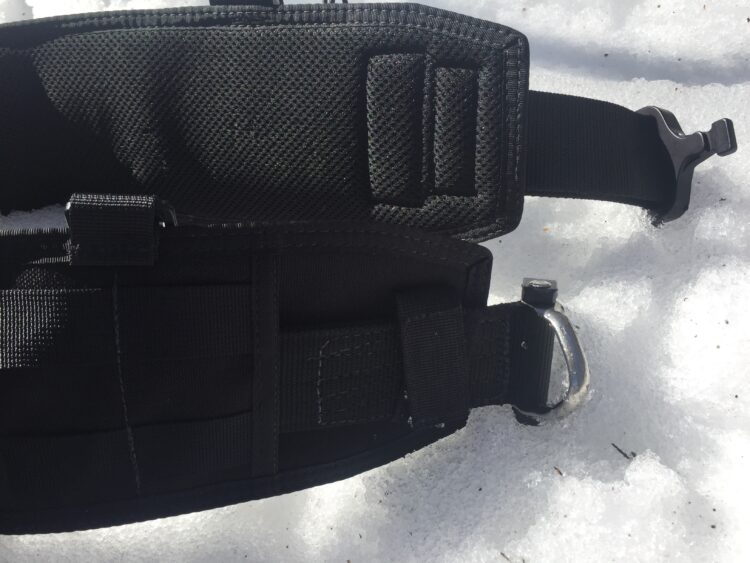 Naturally, when I saw the Sidewinder and riggers belt combo from the Elite Survival Systems , I first thought of an option for a better duty belt.  I was kind of mistaken.  After trying several iterations, I found that with proper planning this could be accomplished.  However most agencies still require too much gear and are bound by uniform requirements that make this almost counter-productive.

The next move was to try the system as it was designed – a balanced enhancement of the first line gear, combined with the ability not only to manage the tactical load, but also to allow the user a hasty load-bearing of themselves, if needed.  I say hasty, because absent a full or some form of seat harness, the actual repelling with a riggers belt alone is still risky.  While doable, it certainly addresses the need many of us on the street have looked at for years: where to clip in for hasty egress and casualty extraction. 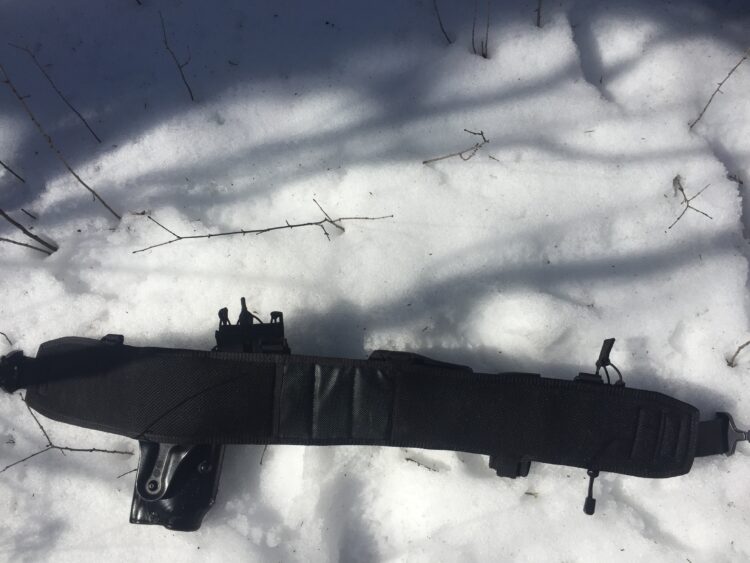 The Adoptive Sidewinder Battle Belt – Rigger Belt combination from Elite Rescue Systems is, in fact, a ready to deploy solution for both.  The riggers belt is a stiffened 1.75″ webbing, which performs well as a weight bearing belt.  Measurement directions are key when purchasing.  I urge the buyer to follow the directions on the precast site to make sure the belts work as designed, alone or as a system. The Sidewinder is a very flexible system for carrying the mission essentials.  Any practical application would require both, some form of a secured inner belt and a sleeve, or the outer portion to which gear would be secured.  It only makes sense that a manufacturer with a reputation for quality and customer support offer both.  I placed several things on the system: one rifle magazine (expandable to two), two pistol mags, dump pouch and an IFAK (Individual First Aid Kit).  I have come to rely on these either as backup items, or as essentials which someone may want to eliminate from their main kit (second line gear) for various reasons.  While some holsters can be MOLLE attached onto the outer belt, the system – and my requirements, are that it is placed on the inner belt itself.  With a full size Sig Sauer M17, one can estimate the overall weight of the system and components.  The Sidewinder allows for ambidextrous placement of paddle and duty style holsters through a slit on either side. 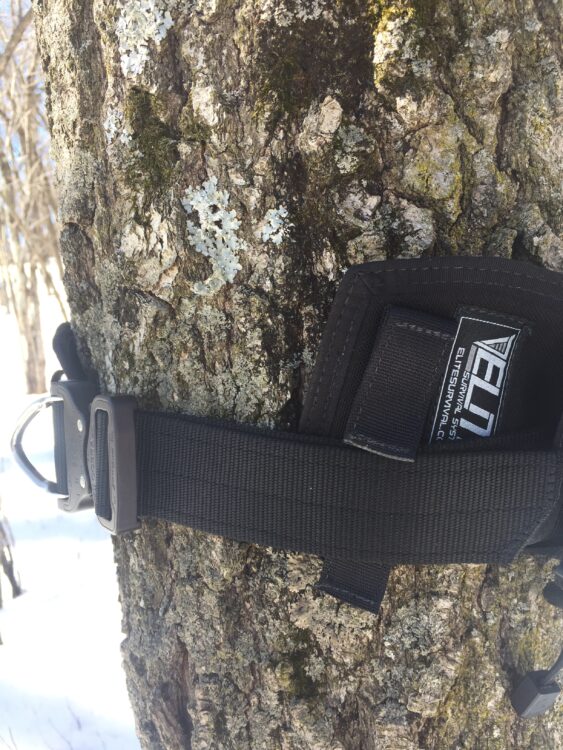 Having used several other systems in the past, there are distinct reasons I find the Adoptive Sidewinder system so appealing.  One, it doesn’t add unnecessary weight by being over-padded.  The Sidewinder sleeve provides perfect balance of load carriage ability and comfort.  The closed foam padding has no unnecessary weight or bulk, while the rigger belt offer perfect support compliment.  The back portion of the Sidewinder has a heavier duty neoprene material, which adds friction and stability, as well as minimizes wear and tear, as that portion is tasked more during vehicle operations. Because there is no “extra” padding, the Sidewinder truly conforms to the user.  Instead of having three padded pieces of back and two sides, it is one smooth piece.  It also has several slots where the rigger belt can be weaved through.  Again, this is in contrast to a more sleeved type designs. 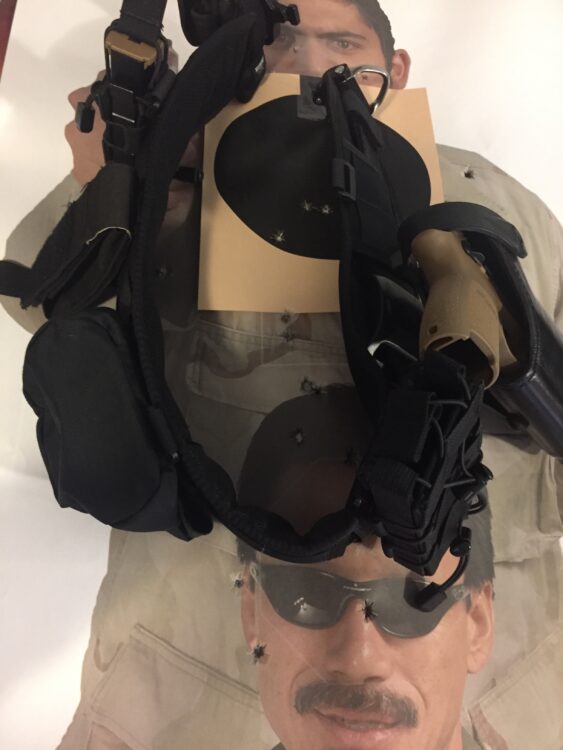 This offers the user a lot more options on where to place the equipment, and which belt surface to use.  If a real estate or profile on the Sidewinder is not conducive to a particular attachment, the user can leave that section of the inner belt on the outside of the Sidewinder, and still attain the benefit of weight relief and support from the system.  This also allows for securing the system to any liner belts with with keepers, if necessary. This goes without saying for the holster.  As mentioned, the ambidextrous slots and the slick approach in design allowed my particular holster to cant properly, and not have to negotiate with the belt where it would be best placed.  I set it up exactly where I wanted to. Two rows of webbing on the Sidewinder offer high or low placement of pouches, and add a nice touch of adoptability.  Additional weight mitigation can be achieved by adding a set of suspenders to the Sidewinder, which has four D-rings at key attachment points. At each end section the Sidewinder uses a hook and loop tab to retain the inner belt.  These are necessary to conform the outer edges of the Sidewinder to the riggers belt, and to keep the later from sliding out.  My use of the system hasn’t been as extensive to determine if these will last, but after several on-off, they have not lost their secure fit, nor frayed. 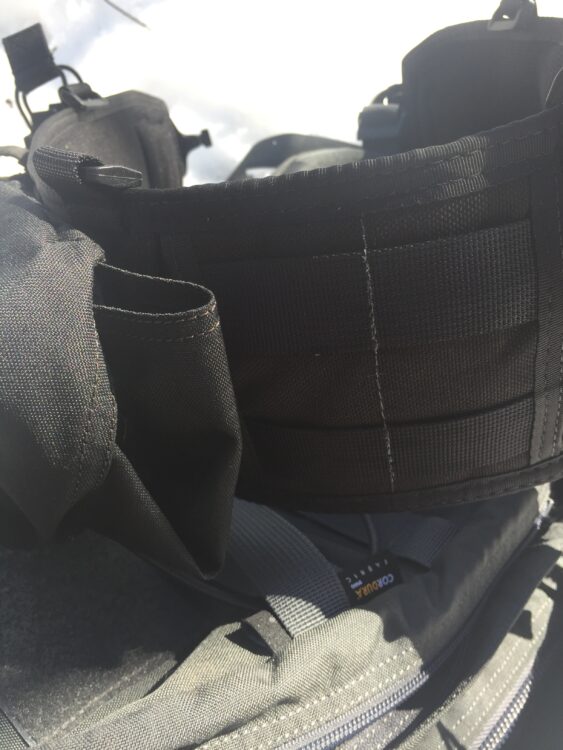 The ESS rigger belt integrates the D-ring in the AustriAlpin Cobra buckle, and is rated for 4000 pound straight pull on the buckle, and 5000 pound straight pull on the ring.  It exceeds the NFPA and ANSI standards for fall protection, and is fully stitched on the D-ring side. The webbing has 7000 pounds breaking strength, and is as you would expect, Mil Spec type 13 webbing.  The riggers belt makes this high performance yet lightweight system ideal for air and water tactical operations where it is necessary for the user to be secured or clipped in. 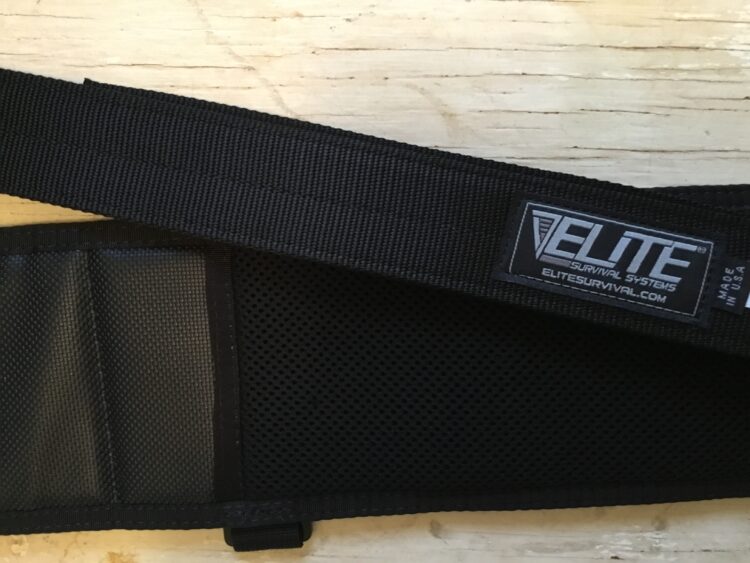 Overall the systems is very appealing.  It is the best of its kind that I have seen for plain clothes work.  Most of this is thanks to the details. Double stitching, low profile design, proper padding at the right places on the Sidewinder itself, and the integrated D buckle on the rigger belt. There is plenty of breathability in the spots where heavier duty padding is alternated with a breathable mesh. 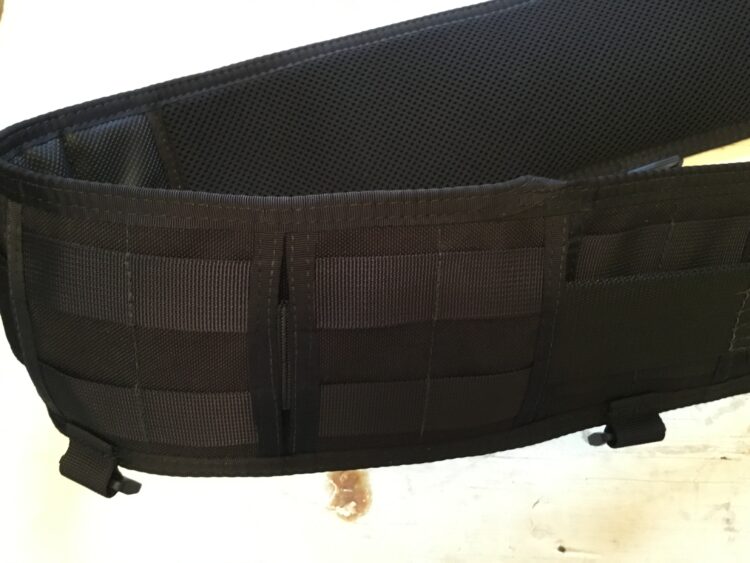 I will continue to work with this system, simply because its so comfortable, flexible and easy to work with.  Elite Survival Systems have established themselves as one of the leading manufacturers in their field, without the hype or fan fare.  Much like their product orientation, they are happy to know that their gear works for those who need it.  In my opinion, the system rates 5 of of 5 in every category.  Appearance, quality, flexibility and value, particularly considering the weight bearing capacities of it as a whole.