Drink, Eat, Survive
Whether you’re camping, hiking, or working in the wilderness, your choice of gear can mean the difference between a fun day outdoors and a life-threatening experience. You should never compromise when it comes to storing water, sanitizing water, and cooking food. Thus enters… Heavy Cover’s Titanium Mess Kit. 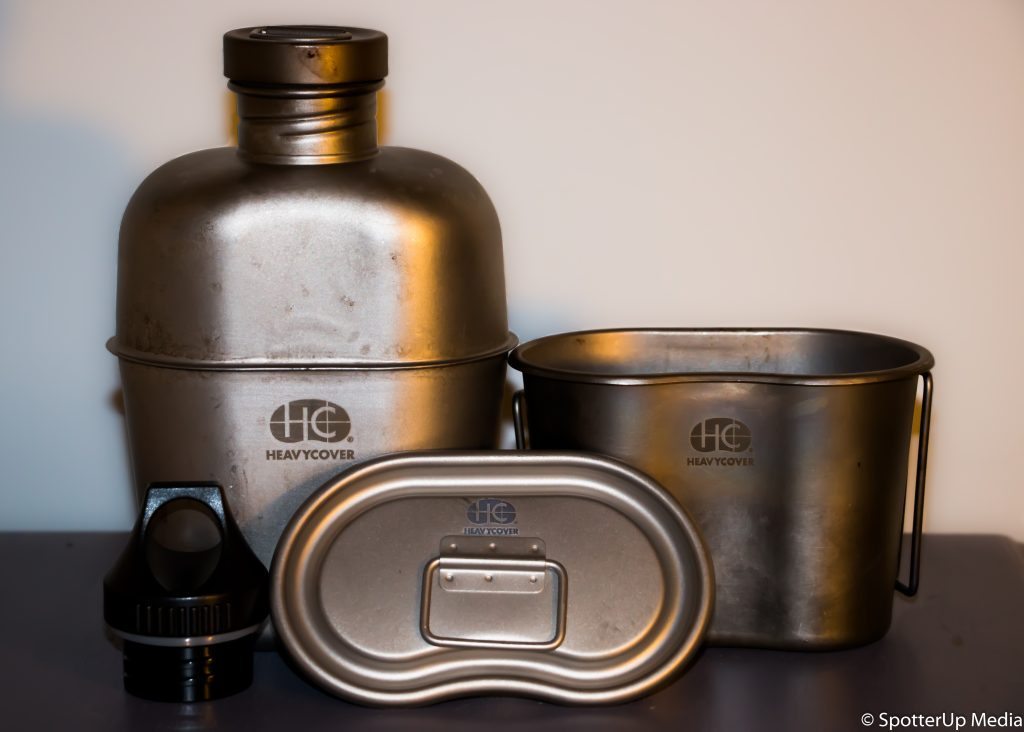 “Ounces equal pounds,” a crusty Marine Sniper Team Leader told his boot radio operator (me). In fact, another Sniper Team Leader would cut his toothbrush by 3/4 in order to save weight. I, on the other hand, reduced even more weight by not bringing a toothbrush on missions. You can’t do either with water bottles or cookware. But, you can carry a canteen and canteen cup made out of titanium. 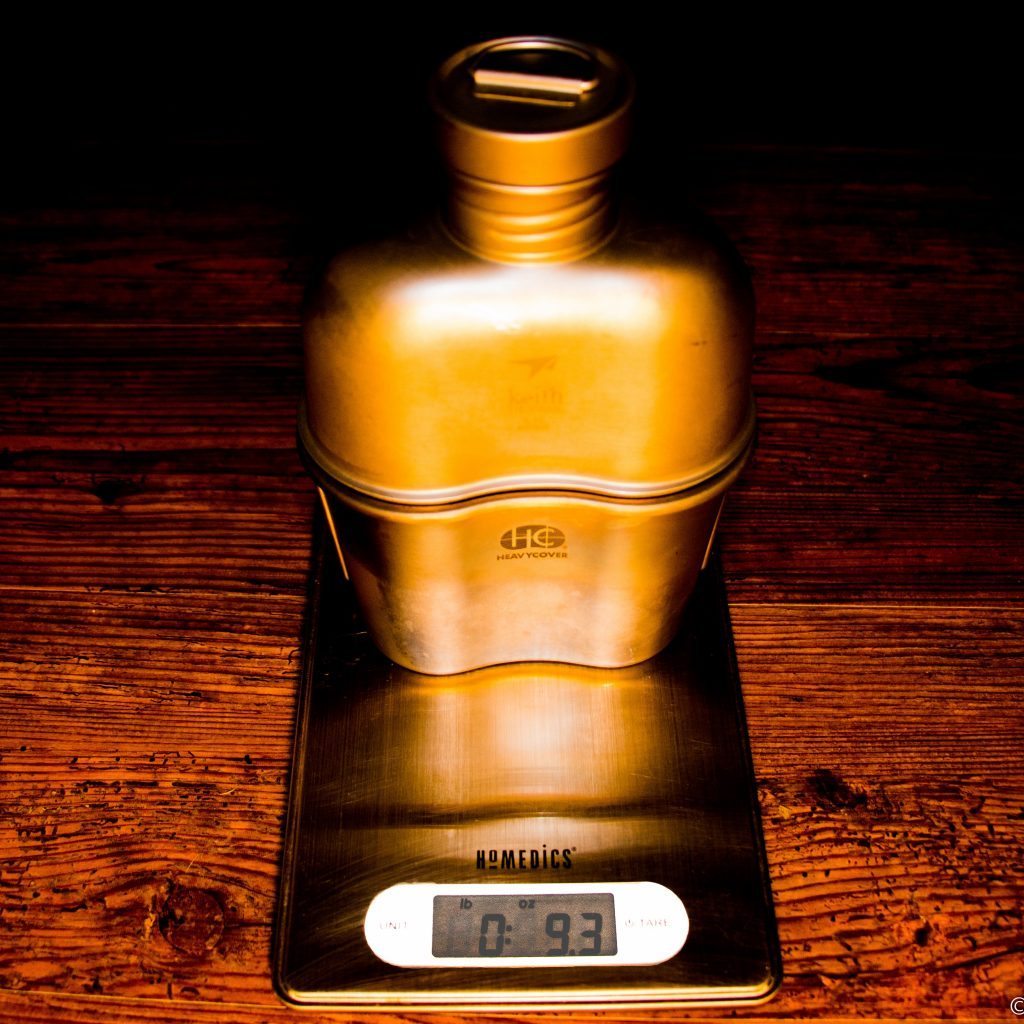 At 5.6 ounces, the 32 oz. canteen weighs less than a 32 oz. Nalgene bottle. Together with the canteen cup, the pair weighs in at 9.3 ounces. This allows Heavy Cover to merge the lightness of plastic with the durability and versatility of metal.

Sure, Nalgene bottles are lightweight and strong. But life in the wilderness creates situations that crack Nalgene’s plastic bottles. In the same situations, a Heavy Cover titanium canteen will simply flex. And titanium is not only lighter, it’s twice as strong as Aluminum. A try putting a Nalgene bottle in a fire to boil water. (Why is that important? I’ll explain later.) 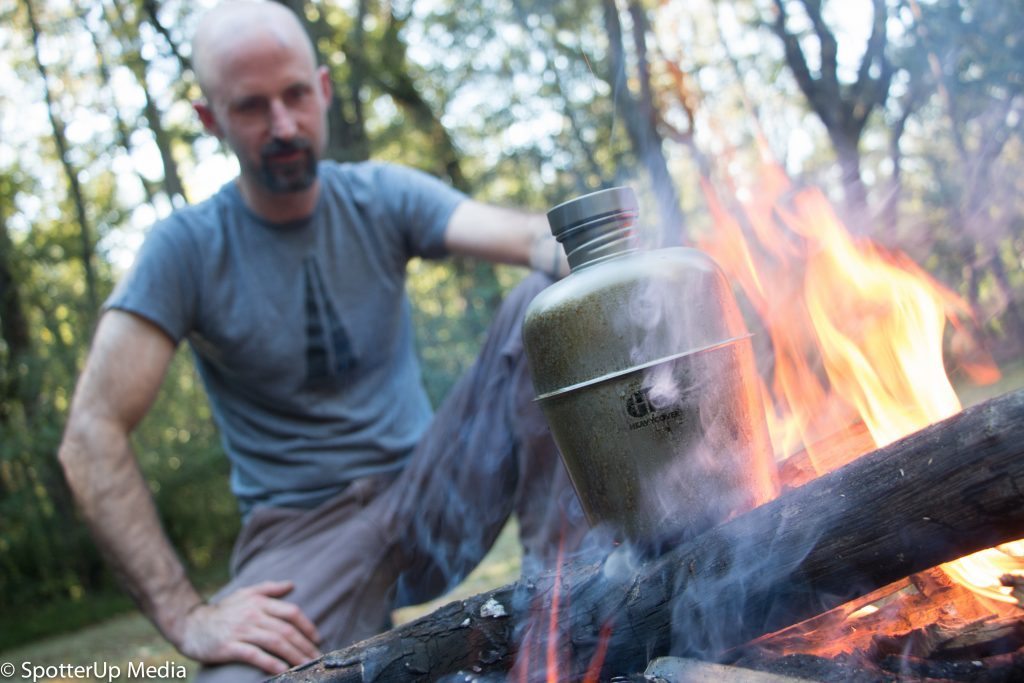 What really sets the Heavy Cover Titanium Mess Kit apart is its versatility. Most people have water bottles for drinking clean water and a bunch of heavy and/or cumbersome cookware for cooking food and making hot beverages. When you’re out in the wilderness for days, weeks, or months, the weight and space of these separate items replaces the weight and space needed for food, water, or professional equipment. The Heavy Cover canteen serves both to store water and boil it. The canteen cup serves to cook food and boil beverages. Not only that, the canteen fits inside the canteen cup. This means that your cookware takes up almost no space. 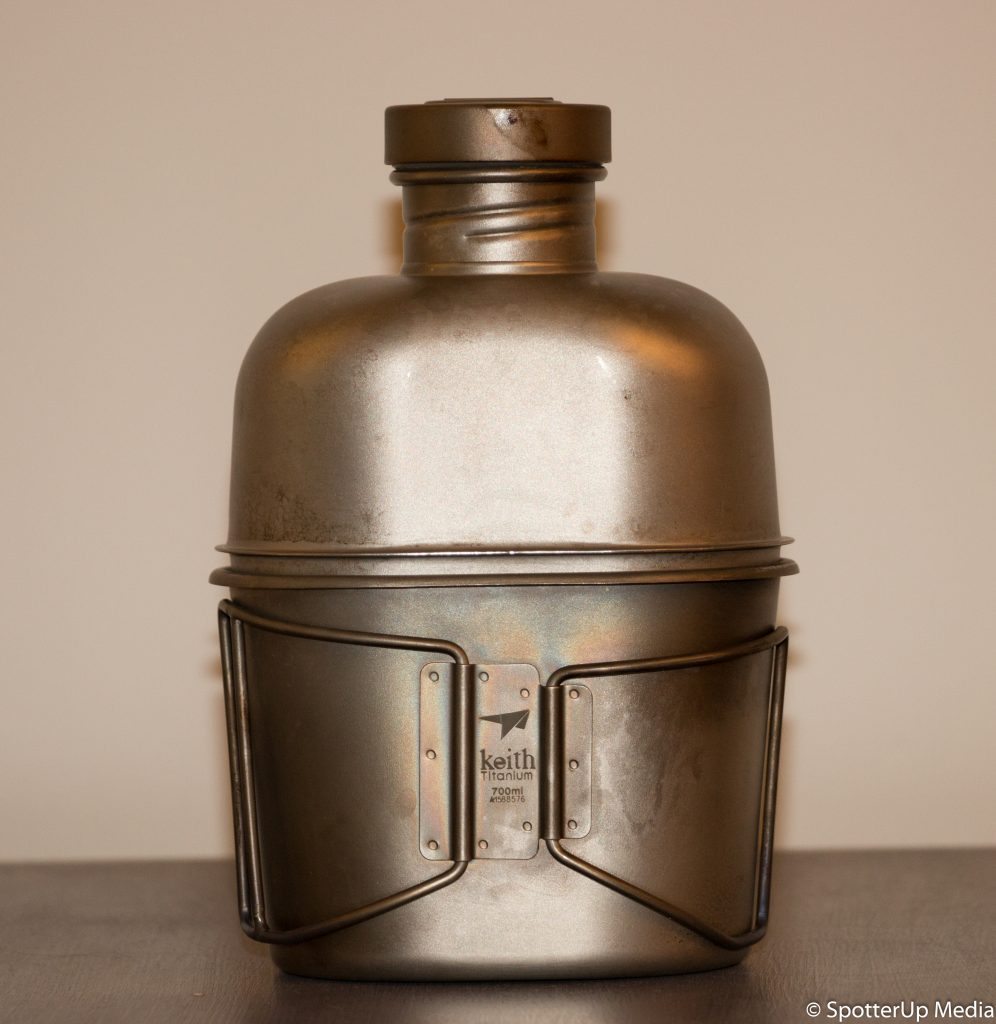 To make the canteen even more versatile, its titanium cap has an attached ring. This enables it to be suspended over a fire to boil water without the need for a grill. It also enables you to retrieve it from the fire without having to touch it. You don’t need any special equipment- just a stick. 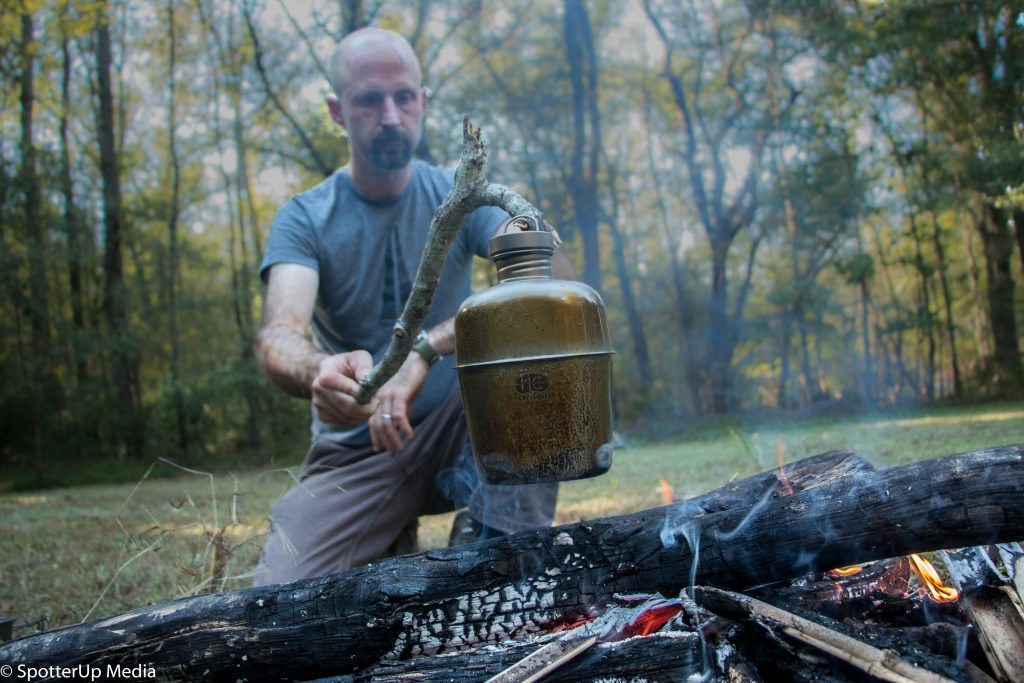 The canteen cup’s versatility comes in it’s handle and lid. The handle is retractable, taking up almost no space when folded against the body of the canteen cup. It not only allows you to drink hot beverages… 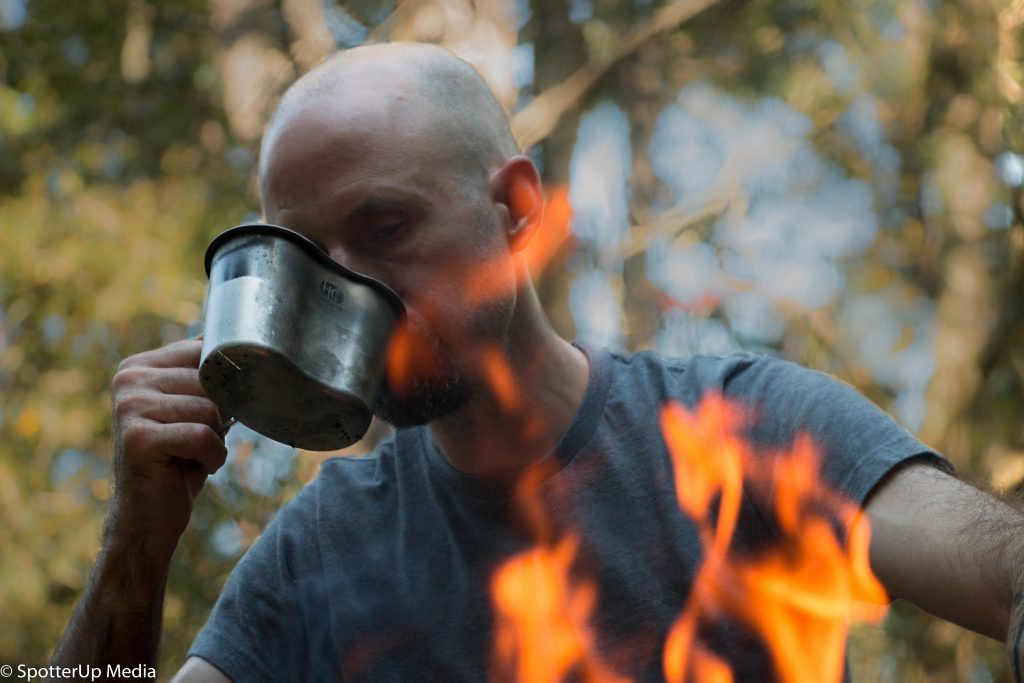 … it also allows you to suspend it over a fire without the need for a grill. 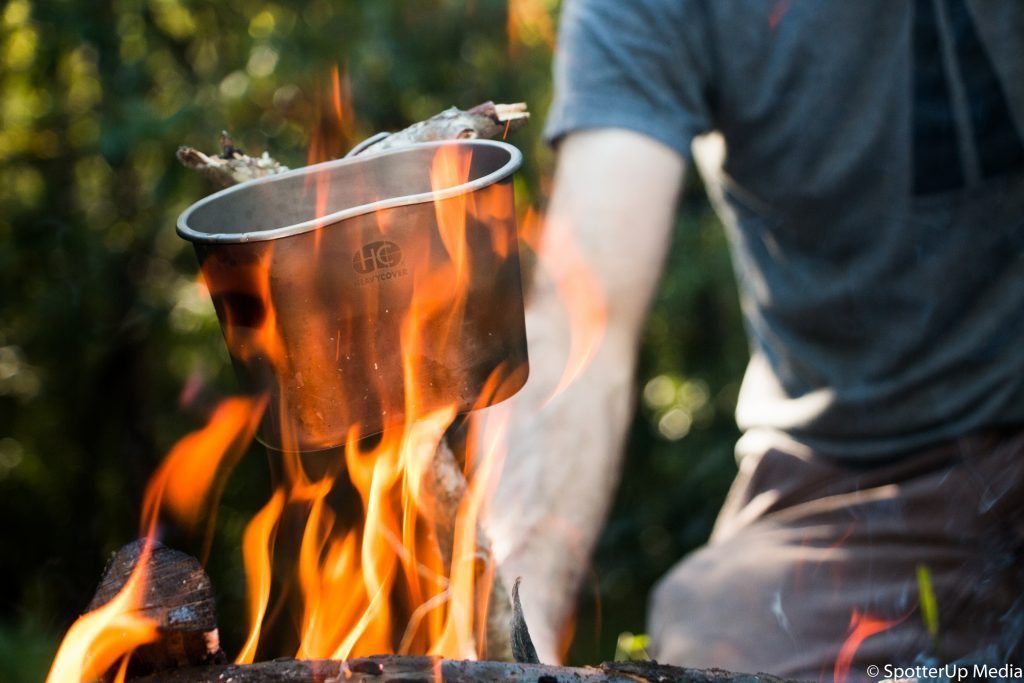 The lid allows you to boil water even faster, protect the contents from debris, and even bake food. Experienced outdoor adventurers and professionals will find the increased survivability and efficiency provided by Heavy Cover’s Titanium Mess Kit is well worth the $155 price tag. 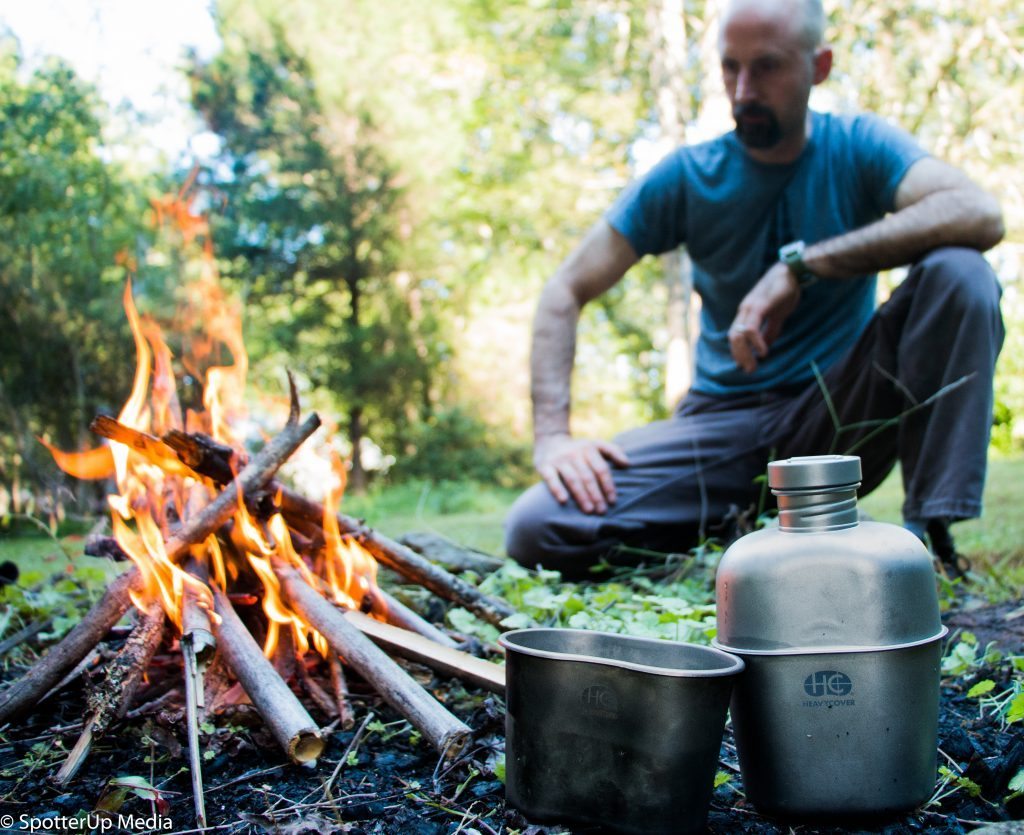 Matt served as a Marine Scout/Sniper Chief Scout and Team Leader from 2000-2004. During 2003, he participated in the invasion of Iraq and returned one year later to conduct operations in Al Anbar and Babylon provinces. Since leaving the Marines, Mr. Victoriano has stayed current on national security and foreign policy issues through training, research, and consulting with various organizations and businesses.

Recently, he was recognized as a White House Champion of Change through his work on veterans issues.

Matt Victoriano subscribes to the Spotter Up way of life. “I will either find a way or I will make one”.