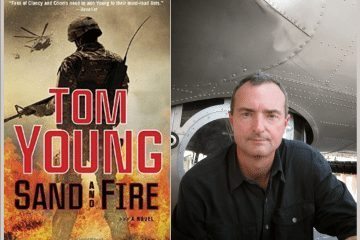 Author Tom Young has written many books that have garnered positive reviews, such as the books The Renegades, the Mullah’s Storm, Silent Enemy, the Warriors and finally let’s add Sand and Fire to his growing list.

For those familiar with Mr. Young he is an American novelist who served in the Iraq and Afghanistan wars with the West Virginia Air National Guard. From those military experiences came his debut book the Mullah’s Storm. He also served in Bosnia, Kosovo and the Horn of Africa.  Young served as a crew chief and flight engineer on a C-130 and C-5 Galaxy with the Maryland Air National Guard and after retiring as a senior master sergeant he has taken to writing books full-time. He currently lives in Alexandria, Virginia. Many writers struggle to publish just one book in their lifetime but Young has published many; this is no easy feat and each one of his books is written well. Sand and Fire I’m certain isn’t the only gripping military thriller he’ll ever write.

The thing that piqued my interest was Tom’s ability to write a contemporary military action novel with a sense of realism. Some authors try force the writing style in their novels but the writing style comes out as very contrived and the prose is quite stilted. Authors looking to make a buck by trying to replicate the tough guy talk of cop turned writer Mickey Spillane often end coming up short. Young has found his own voice and writes in an easy style and it’s digestible to every reader. Young does this be leaning on what he knows and the rest comes from careful research. He wanted to make the novel as authentic as he could and therefore relied on the U.S. Marines to answer his questions about weapons, tactics and the Marine Corps culture. He has a great respect for them and it shows in the book. He did a good job. 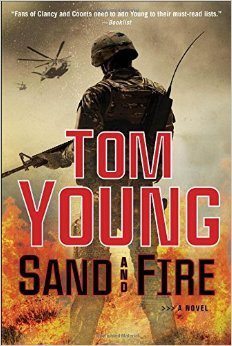 He covers a lot of material in his book and even gives readers a small glimpse into the issues of PTS and how multiple deployments can affect families. Young also tries to depict the conflict every service member feels between duties to family and duties their country. Again, I appreciated the research Young did beforehand because it pays off and lends authenticity to his characters. In this particular case, his protagonist is a very intimidating and capable 6-foot-8-inch tall Marine Corps gunnery sergeant named A.E. Blount, and the character is like a real life Marine; laser-focused on stopping the bad guys. Blount is also a composite of the many people Young has known in his life. Even the farm life and Southern tobacco fields that the character Blount knows comes from Young’s own experience of growing up on a Carolina farm.

In our story gunnery sergeant Blount is nearing retirement. He wants to enjoy his time with his two daughters and wife but he will have to put that ambition on hold. After stopping off at a U.S. base in Germany he witnesses a chemical attack at a nightclub. The terrorists use sarin gas to kill and this does not sit well with the old gunny. Blount is committed to fulfilling the oath he took to defend our nation from any and all attackers. This evil isn’t something that comes out of fiction. Brutal attacks of sarin gas occurred in Syria and even in Tokyo. Evil is real. Bad guys beware…

Main characters from previous novels, such as Air Force Colonel Michael Parson and Army linguist Sophia Gold, take a back seat here and Blount gets to drive the books’ action. Battle-seasoned Blount sets out with a strike force mission to kill the terrorists but the mission does not go well. It’s a trap. Marines are killed in North Africa. Parson and Gold pair up  in Libya to lead a NATO effort. Blount and his team must be rescued. The jihadists threaten to kill one Marine prisoner a day and they want us to withdraw from the area.

Young has a great respect for the military and their family and supporters. In Sand and Fire Young attempted to show how the different forces work together for one common goal. In his own career Young worked with the Army, Navy and Marines. Readers get to see much of how different military units work together to solve a problem. Readers also can see how Young admires the Marine dedication and professionalism to their work and he created the character of Blount partly as a tribute to the Marines. Blount will need all of that training and experience to handle this difficult ordeal because he will be fighting for his life. Check it out.