When it comes to using a rifle, the sling is probably the most important piece of gear to consider. There are so many different designs and styles to choose from on the market. Personally, I was never really into looking around for slings that were “cutting edge” or anything like that. I just needed something that would keep my rifle on me when I was too busy using my hands. Recently, I got the opportunity to try out a custom Vickers sling from Blue Force Gear. I ordered it on the Blue Force Gear website and had it to my door within the week I ordered it.

The Vickers sling is definitely unique and seems to be the perfect design for customization. The sling is made up of two parts, the front and rear webbing. The front is the business end where all the adjustments take place while the rear is simply supposed to stay put and really establish the length of the sling prior to adjustment. The webbing is 1.25″ wide and is made out of what they call Invista solution dyed CORDURA. This material is pretty tough, but is thin enough to give it excellent flexibility. Then ends are cut and melted to prevent fraying, but it is done very neatly. The hardware holding the webbing and the attachments together are made of a Zytel Nylon, which has earned a reputation for durability through the vehicle and gun industry. Overall, it would seem that the sling is made out of pretty good materials and is gonna give you the best performance without breaking the bank. 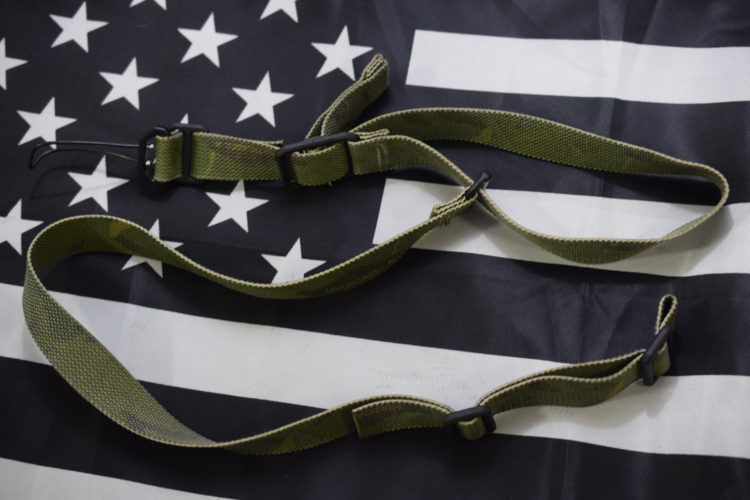 When you go on the Blue Force website, you will see that they have an entire drop bar just for slings. If you select “Custom Slings” it will give you the option to choose from either a standard or padded sling. I selected the standard Vickers sling setup for myself. From here you are going to get to BUILD your sling and as you select things, the picture of the sling will change to show you a preview of what your sling will look like.

You have the option to have a color for each of the three sling parts. The front webbing, back webbing, and the pull tab can all be the same or different colors.

You have a total of 12 colors to choose from.Some crowd favorites are Coyote Brown, Foliage Green, Kryptek Highlander, Multicam, Multicam Arid, Multicam Tropic, etc. There is no extra charge for any of these colors. For my sling, I got it completely colored in Multicam Tropic. It is one of my favorite camouflage patterns after the British DPM.

After selecting the color of the sling webbing, you move on to selecting the attachments for the front and rear portions of the sling. . For myself, I have one rifle in particular that is a special case and needs a very specific method of attaching slings. That rifle would be the PTR91 GI. After looking through all 14 of the attachment options, I found that the 3.25″ UWL(Universal Wire Loop) would be the best option for the front hardware. The UWL uses a 6061 T-6 Aluminum loop base which holds a solid nylon coated wire in place. 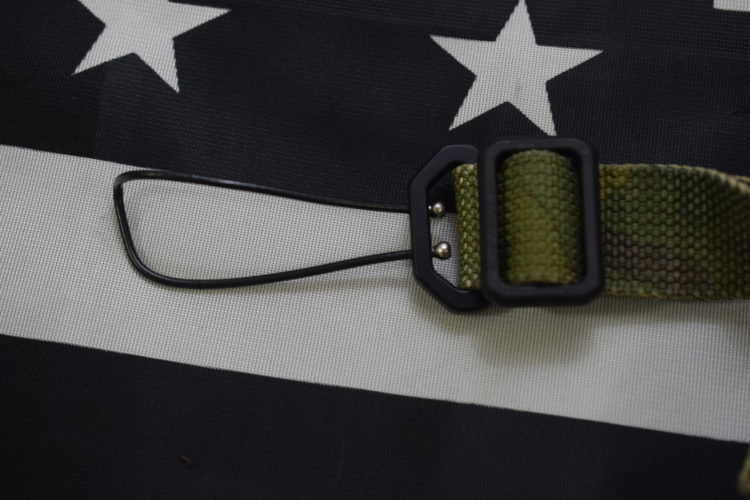 It is the only attachment that would work with the PTR91. Basically you just thread the wire through wherever you can and then loop the base through, as shown. For me, I took the UWL off the sling to make it easier to thread it through and secure it. 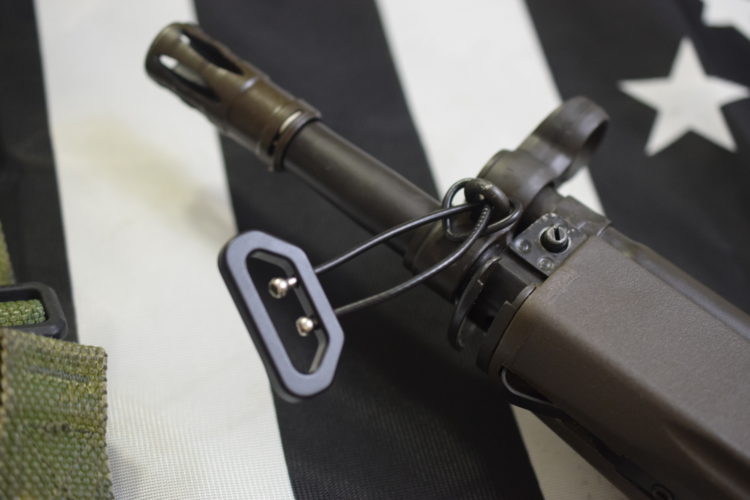 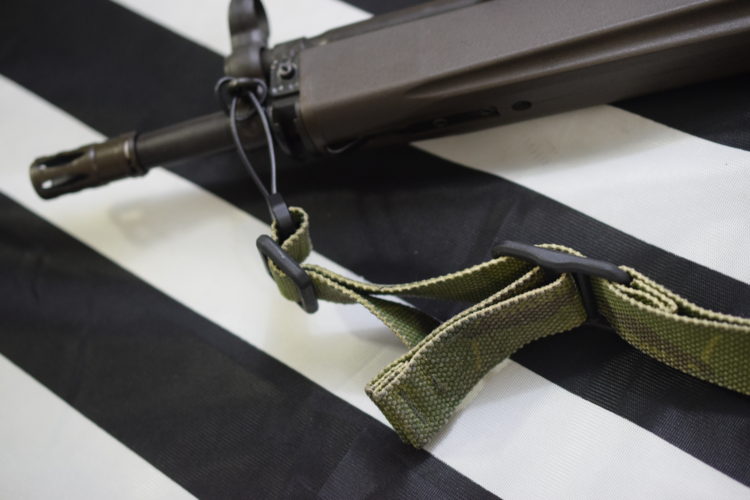 That little jewel actually cost me the same amount as it would if I were to buy it separately. I wish that the attachment hardware would come at a little bit of a discount when selected as part of the custom sling. I personally feel that it would be a much more attractive deal. When I ordered my sling, I knew that I would have little to no need for any other attachment hardware. For one, it would cost me, and two, all the weapons I was gonna use this sling on already had an attachment point.

I just want to make a quick note about the options you have to choose from as far as sling attachments. I called Blue Force not too long ago to learn more about their slings for this article, and to also give them feedback. I only had a couple of recommendations for them at the time. First recommendation was to add more camouflage colors and general color options like purple and stuff to really open up the market to women and a wider variety of users. The second recommendation was to add a piece of hardware that allows the user to turn their 2-point sling into a 1-point sling. I was told over the phone that they would look into it and that they had the Burnsed Socket, which allowed you to do just that. At the time, I was told that I would have to purchase it separately for about $30. Well, it would appear that my recommendation to have the Burnsed Socket as an attachment hardware option was heard and implemented. Now you have an option to select this piece of gear as an attachment, and it costs less to have it put in the custom sling than it would to purchase it separately.

After selecting the attachment hardware, you go on to selecting the general sling hardware. There are 5 color options for the nylon sling hardware and an Aluminum option for a little extra charge. I went with black nylon for my own sling hardware. Nylon may not give some people confidence in the durability of their sling, but I feel very secure with it after using it harshly. 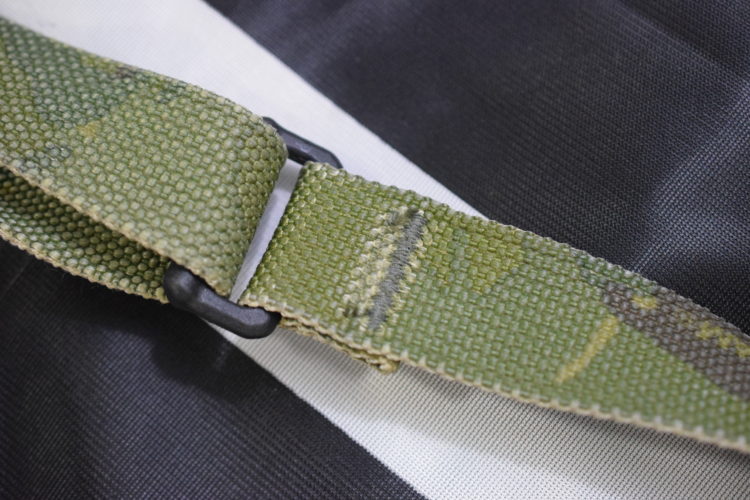 After this is all finished, you come to the last part which is choosing how you want your front and rear attachments secured. You can either have them on what they call triglides, or have them sewn in permanently. I of course chose the triglides. It doesn’t cost extra to have the attachments sewn in, but I didn’t see the point. It would have also been very counterproductive for me since I knew I was gonna be using this sling for several different weapons with several different attachment methods. 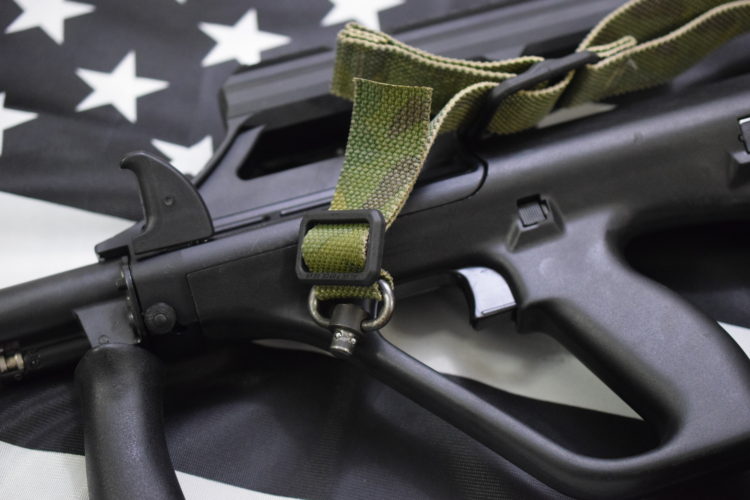 There is not much to the sling. It is very straight forward in how you operate it. Basically, you pull the Adjustment Pull Tab closer to you in order to give yourself more slack, and then push it towards the weapon in order to take up slack. This sling truly shines in the two point function in my opinion. The sling webbing is pretty slender and lightweight, but it is thick enough to be very durable. The webbing basically has the feel of a shrunken down military duty belt. Very tight weave and there is no stretch to it. It works very well on my Steyr AUG because it is flexible, but without being floppy and getting in the way. If you have ever tried using a sling on an AUG, you know that you cannot have a sloppy sling unless you want your sling to be smacked to death by the escaping gasses from the gas piston system. That is a bad day for your wallet from my experience. The Pull Tab is a good size for the job that it is serving, and it is rigid in order to give you a tactile reassurance that it is the Pull Tab instead of the extra sling end sticking out of the triglide. 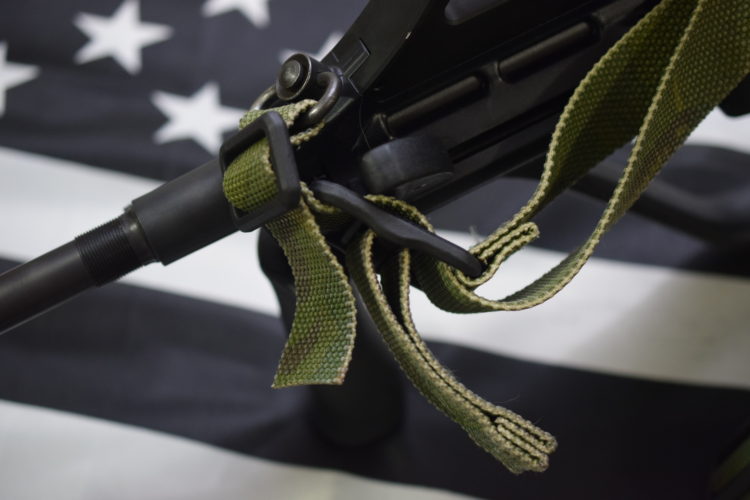 When you are attaching the rear of the sling to your rifle or another attachment, you may wonder why there are two triglides on the rear webbing. 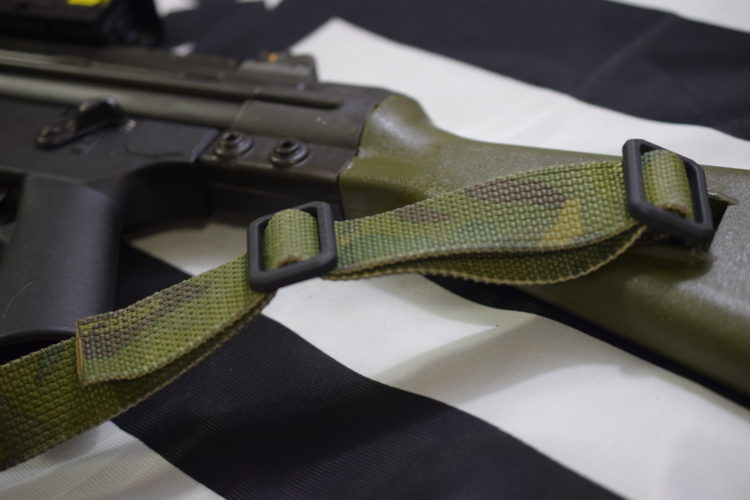 Quite basically, the second triglide is to give you a way to secure excess sling. For me, I actually found myself using the same amount of sling on both my PTR91 and on my AUG. 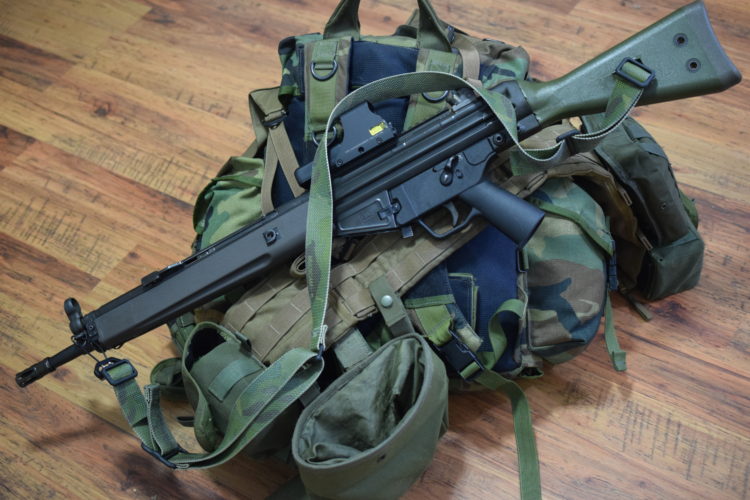 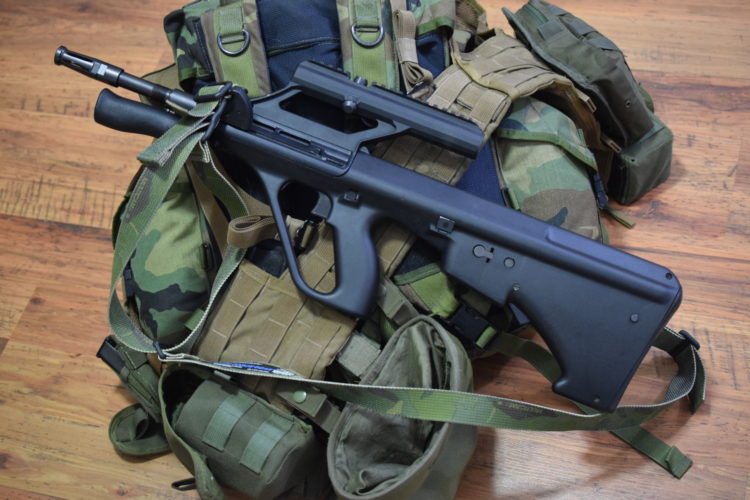 Adjusting the sling is amazingly easy. With other slings, I found myself having to use wrestle with them a little in order to take up slack. Getting slack on a sling had always been the easy part, but taking it back was always the problem. With this sling, it was much easier to adjust the sling swiftly with one hand. It took a little force when using it on a heavy rifle, but the point is that I could do it with one hand.

I really like the design after having some time to use it and see what it offered. Though, I will note that after a little bit of time, the triglide at the front did allow some of the sling to slip out. It wasn’t enough for me to be concerned too much, but I decided to scoot the triglide all the way up to the attachment in order to maximize tension on the sling. This seemed to solve the problem for now. Aside from this, I found the sling to be very comfortable, lightweight, durable, and very handy to use. I have come to prefer this sling over other ones for my uses at this point.

I would have liked to see more options in terms of hardware and webbing/hardware colors.

The sling held up well, but the high friction areas did lose color after a good amount of use.

The sling works exactly the way I thought it should, minus the excess slipping out slightly with extended hard usage.

As I said, I feel that a discount on hardware would make this sling a better value.

The views and opinions expressed in this article are my own and should not be considered as the general opinion of the other writers of Spotter Up. I am not under any written, verbal, or implied contract to give this product a good review.