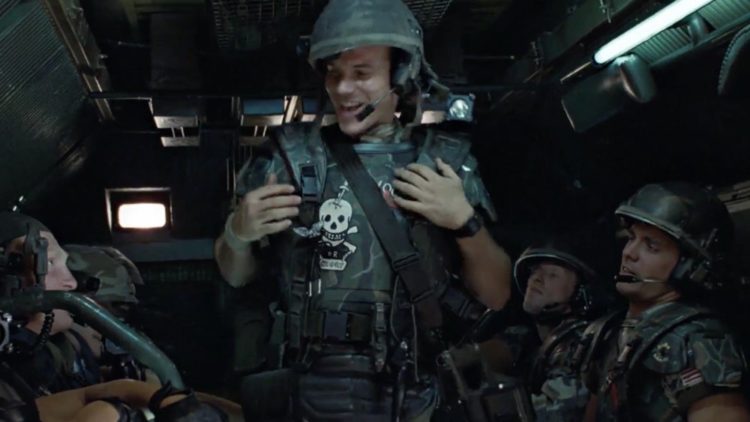 Profiles in History plays an important role in the preservation of movie history by connecting buyers with dealer guaranteed-authentic original historical memorabilia.  Here are some of their highlights:

Prior Profiles in History Hollywood auctions highlights include the “Cowardly Lion” costume from The Wizard of Oz ($805,000); a full-scale model T-800 Endoskeleton from Terminator 2: Judgment Day ($488,750); Marilyn Monroe’s “Diamonds” dress from Gentlemen Prefer Blondes ($356,500); Luke Skywalker’s light saber from Star Wars ($240,000); Margaret Hamilton’s “Wicked Witch” hat from The Wizard Of Oz ($230,000); and The Invisible Man 1933 one-sheet movie poster ($230,000). Most recently from the history-making Debbie Reynolds Auction in June 2011, Profiles in History sold the Marilyn Monroe “Subway” Dress from The Seven Year Itch for $5.52M, the Marilyn Monroe signature red-sequined showgirl gown from Gentlemen Prefer Blondes for $1.44M and the Audrey Hepburn Ascot Dress from My Fair Lady for $4.44M. 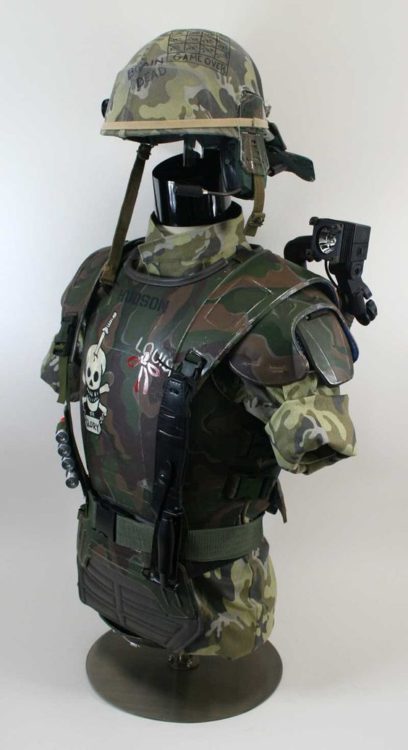 If you like Marines, Aliens, guns and the late, great Bill Paxton then take a look at this auction. Bill Paxton wore the armor prop in the movie Aliens. The armor is expected to sell for $10,000 to $15,000.

The Colonial Marines armor was created by Terry English for James Cameron’s Aliens (1986). Terry is an accomplished designer with art school experience who worked alongside many distinguished costume designers including Bob Ringwood who did the first Batman movie starring Michael Keaton.

Description:1338. Bill Paxton “Pvt. Hudson” Colonial Marine armor from Aliens. (TCF, 1986) Original hero screen worn Colonial Marine body armor created for Aliens production by legendary armorer Terry English. Consisting of pressed aluminum panels, cast resin components, web belting and plastic buckles. Including 2-sided chest and back armor of aluminum linked together at the sides by black web belting. Tri-tiered pauldrons of aluminum with comfort padding also attach to the chest and back plate with rivets and web belting. The entire body armor assemblage has been painted in green military camouflage. James Cameron instructed each actor playing marines to personalize their uniforms, in character, as homage to soldiers of the Vietnam war and for the practical purpose of distinguishing characters from each other onscreen. Paxton wrote Louise on his body-armor as a nod to his wife. There are also paper decals and stencil text in the breast plate. Included is Paxton’s combat helmet with affixed prop camera lens on the right side, head microphone and retractable eye-piece that drops from the brim of the helmet in front of the right eye. All pieces are expertly studio distressed with signs of production wear and some missing plastic clasp buckles. A piece of Alien franchise history, worn by Bill Paxton, a favorite big screen Marine. In vintage very good condition. $10,000 -$15,000″

Here’s another description: A set of replica Colonial Marine armour from Aliens, made by renowned armourer Terry English. English, who made the armour for the original film as well as armour for Alien³, hand-beat this armour privately after the production. 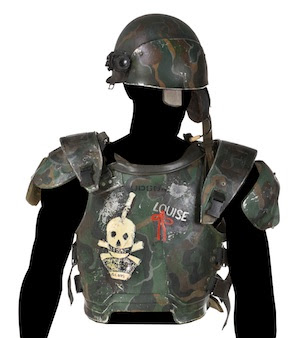 The armour is made of aluminium with artificial leather and foam trim and is composed of a helmet, upper body armour, codpiece and shin guards. The armour is finished in the style of Marine private Hudson (Bill Paxton), with graffiti on the chest and back over the green and brown camouflage. Both the chest armour and the greaves are marked with Terry English’s trademark “T” stamp, ensuring that the armour was made personally by him.

Along with the armour, the set is supplied with a replica set of Marine BDUs with Hudson insignia, a shoulder lamp, range tracker, tracker watch, Hudson dogtags, hacking tool kit, belt tool, smartgun battery, grenades in transit box, welder, webbing set and pouches. A real Gerber fighting knife – the same style carried by some of the Marines in the film, including Hudson – is secured on the front straps.

Private First Class William L. Hudson was a combat technician in the United States Colonial Marine Corps, part of 2nd Battalion Bravo Team. He was a member of the combat unit deployed to Acheron aboard the USS Sulaco in 2179, to investigate the sudden loss of contact with the colony of Hadley’s Hope. He was subsequently involved in combating the Xenomorph infestation at the colony. 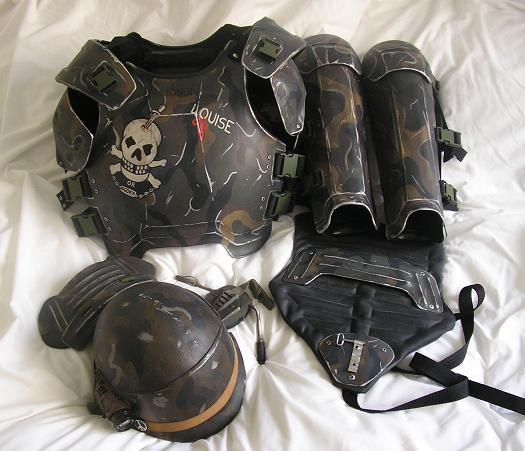 From AVPWikia: Hudson was part of First Squad’s gun team, along with Private Vasquez. He was also the squad’s leader, although Sergeant Apone assumed nominal command for the initial operation at Hadley’s Hope. Hudson was also designated First Squad’s Motion Tracker operator. He was among the last to perish in the incident, eventually becoming host for a Xenomorph Chestburster. His body was later found by Corporal Christopher Winter from the USS Sephora during a subsequent investigation of the colony.

The APC (armored personnel carrier) was built upon the chassis of a Hunslet ATT 77 Aircraft Towing Tractor.

Here’s some more interesting info from a propstore and a Cosplay PDF (alienscosplayguide) that gets into detail on the armor:

Each actor had three sets originally. However, during filming, spares sets would be assigned to actors with more screen time, so would be repainted to match. This caused some continuity errors as the camo pattern on the armor would vary on the extra suits.

The M1 “Steel Pot” Helmet: Vietnam issue (and earlier) helmet was used as the base for the Marine helmet.

The camouflage clothing pattern was printed specifically for Aliens and has a small print repeat of 38cm x 31cm. The costumes were made by C&J costumers in London. The camo pattern appears to be a ‘squeezed’ adaptation of an ERDL (Engineering, Research and Development Laboratories) pattern, nicknamed ‘frog & leaf’ and used by the US Elite Forces in Viet Nam, it being a predecessor of the US ‘woodland’ pattern.* Reproduction costumes, using a surviving roll of the original cloth, were made by Fiction & Fantasy Models in North London in 1995 and were identifiable from originals as being marked ‘F&F’ in black marker pen.

Fun Fact: ​Originally, James Cameron had given a sample of the BDU camo pattern to Terry English, so that the patterns on the armor and BDUs would match. However, Terry English forgot to take the sample with him back to his workshop and with the two week deadline looming, decided to play it by ear. Thankfully, Cameron liked the contrast between the armor and the BDUs, so the armor didn’t have to be repainted. Actors were also allowed to personalise their armor with various graffiti, with the exception of Michael Biehn. James Remar had originally been cast as Hicks, however had to leave the production after filming
had already started (a shot of Remar is used as the Marines enter the hive), so Biehn was stuck with the
graffiti that Remar had put on his armor. 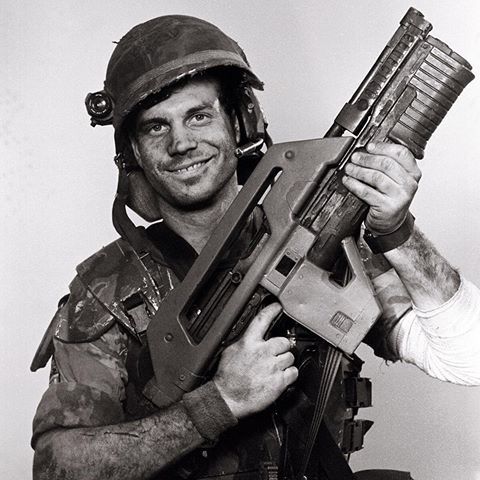