Of all the training tools I use at C4 Combatives the AKU Strike Mimic T16 is by far my favorite. I have to admit however when I first got it my general attitude was skepticism. I remember my initial thought in mind was “I’m probably going to break this thing real fast” but after 6 months of hard use through private training, tactical courses, and being handled by professional fighters, professional soldiers, law enforcement, and people of all walks of life the AKU has stood the test of hard use in C4 Combatives training. 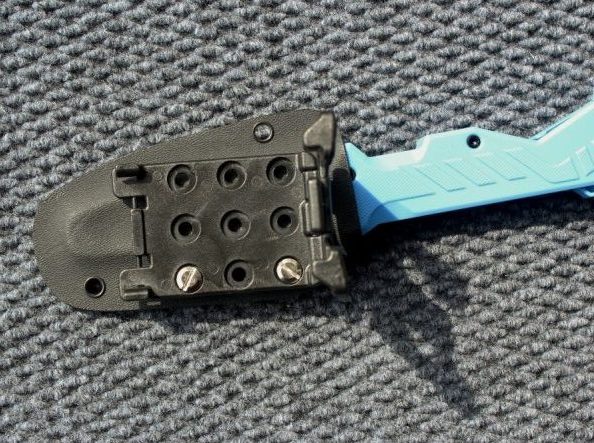 I ordered my first knife through akustrike.com and picked up the sheath for the trainer as well. The 2nd trainer I bought in nickel came from Aperture Fight Focused (Formally known as Funker Martial Arts)  You can see the brief video review I did for Aperture on YouTube

The sheath is like any other Kydex sheath in that it’s durable and there is an audible click once the trainer is fully seated inside of the sheath. Of note about the sheath is during many training sessions at C4 Combatives just the sound of the trainer leaving the sheath immediately induced a stress response from my students and clients. The sheath is also adjustable so you can keep people guessing as where the knife will come from and empirically test what works best with an everyday carry knife. 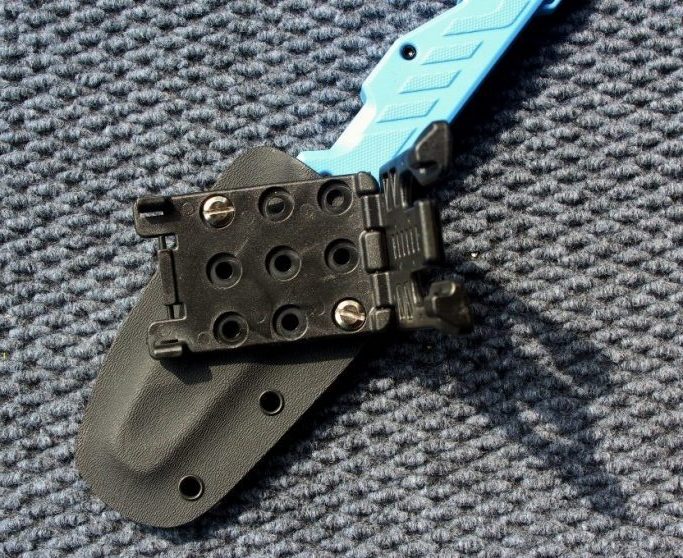 I only have one small issue with the sheath in that is the sheath comes apart as you put in the trainer but then comes together again once fully seated. Again however it’s a small issue and does nothing to hinder training. If we’re really being honest bad guys generally don’t carry their weapons with sheaths or holsters regardless.

On to the training blade itself: 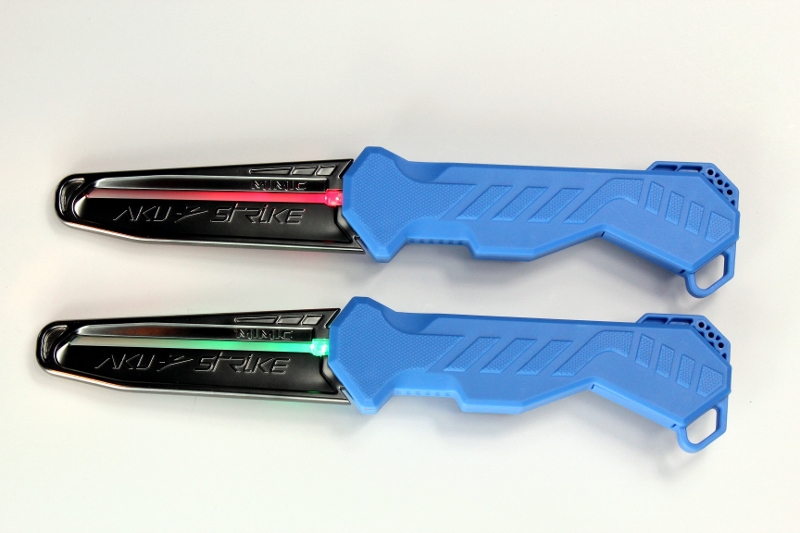 Those in the know about knife fighting understand it’s not a ballet of blades where both Fighters have their knives deployed and they start to play West Side Story. Knife fights generally play out more like prison movies in that there is a leveraging arm and the other arm play sewing machine. I’ve used many high end edged weapon trainers over the years but most simply don’t justify the cost for the training value the tools provide.

Generally most Edge weapons trainers only facilitate the slashing aspect of knife attacks when it is really the stab we have to address. 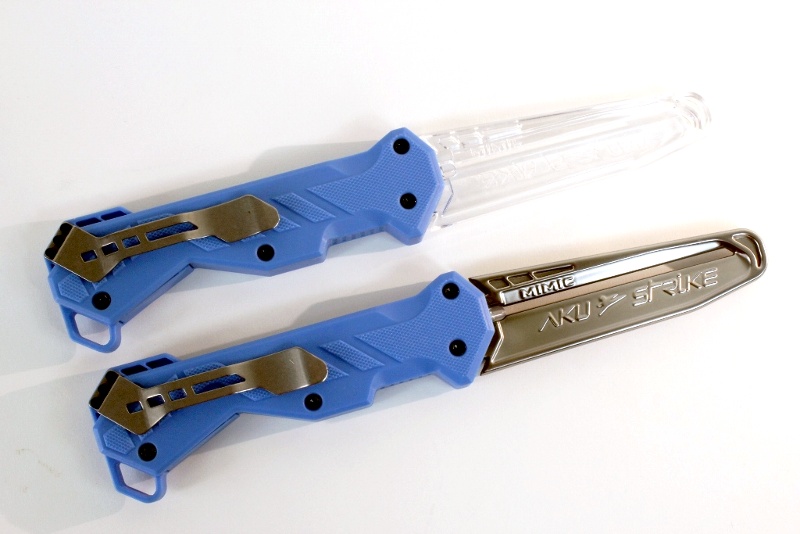 There is zero difference in the durability between the nickel and clear version. I’m thoroughly impressed with the simple yet effective design of providing an audible and visual response to both slashing and stabbing attacks. Pressing the knife against training Partners using the parts of the knife that don’t have an edge don’t register sound or light. I was initially concerned that it would give a lot of false feedback but this issue has been minimal at best. 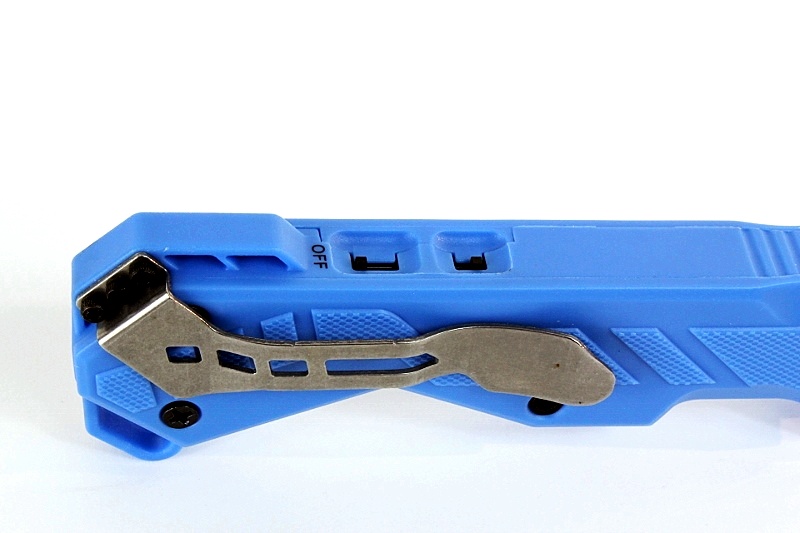 The settings on the AKU can be adjusted for lights with or without sounds or switched off completely. One of my concerns about this trainer was that the blade would break and we trained with it. Let me reiterate that these trainers have been through hard use for over 6 months and there isn’t even a chip on the trainer. The sounds is loud, annoying, and cannot be ignored. Now while this doesn’t knife doesn’t shock or hurt you in anyway (that is serious injury) the response I’ve seen in students has been a severe increase in the sense of urgency to address that threat.

The grip of the knife actually fits the hand very well. The clip on the knife is actually rigged like my EDC knife the CRKT M16 (I’ve carried this knife since 2005) and both are roughly the same size. It’s important for me to say that I’ve been to provide and personally receive a great amount of training value using the AKU. I alternated training sessions using the clip and sheath. Overtime the clip would bend and cut one students hand a little bit so I removed the clips. Small issue and it only happened once in a class exclusively for professional military and law enforcement. 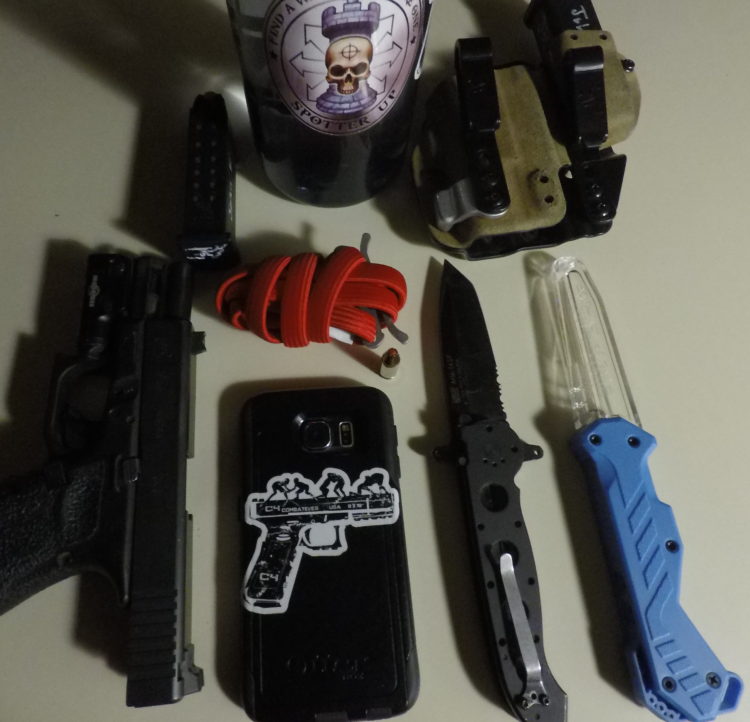 The data that drives the training methods and techniques of C4 Combatives comes from almost two decades of warfare and in that time with almost a thousand post action interviews what we found was that every single fight on the battlefield is a grappling fight with strikes, and weapons. The death touch is real and it comes from weapons. So that charges the responsibility of combatives instructors to train their students and clients to the standard that the enemy might be armed.

With that in mind it becomes a daunting task to train people with some of the Antiquated tools of the past. The mimic facilitates the type of training to effectively embed in the students mind to fight everyone as if they might be armed. The mimic not only produced a stress response in students and clients but some students even gave testimonial to feeling fear of what a knife attack would be like. We will still maintain the other training tools we’ve used in the past but the mimic trainer is indeed the future.