First Impressions: These look great and if you take a closer look they actually tell a story with all the small details they’ve got etched into them. These aren’t cheap, flimsy, rubber beach-wear, pimped out on the boardwalk, by store owners looking to make a buck on tourists who forgot to pack footwear. Just one look and you realize these guys are on to something. Birkenstock and Aeropostale these ain’t. Combat Flip Flops look like they’re made to kick someone’s ass before you head into a bar in Texas and tell your listeners the backstory.

Surely these sandals are conversation starters and a lot of thought went into this brand. The tag line is ”Bad for running, worse for fighting” but wearing their sturdy footwear certainly makes you feel like telling everyone you’re the boss. When somebody disagrees with you just lift up your foot and show them why.

Okay, let’s be real. Combat Flips Flops might not help you throw a punch better but let the sandals do all the talking. By night’s end it’s likely that you’ve got some new friends and sold them on getting their own pair. So, let’s set the record straight. Combat Flip-Flops aren’t designed for covert beach and bar ops. But they look like they should be.

The Details: Each of their sandals (or flops) is well made and the brilliance is in the details. The AK-47’s are decorated with the butt ends of AK-47 shell casings. The Tuck Tucks that I’m reviewing are brilliant red and symbolize the energy of every industrious Afghan citizen who taxis around cities in their loud, three wheeled ride the sandal is known by.

It took me a few days to notice every feature in them. From the poppy hood ornament to the quality stitching, to the Afghan flag colors, they tell a great story. As advertised, they’re louder than most flip-flops and are definitely conversation starters. 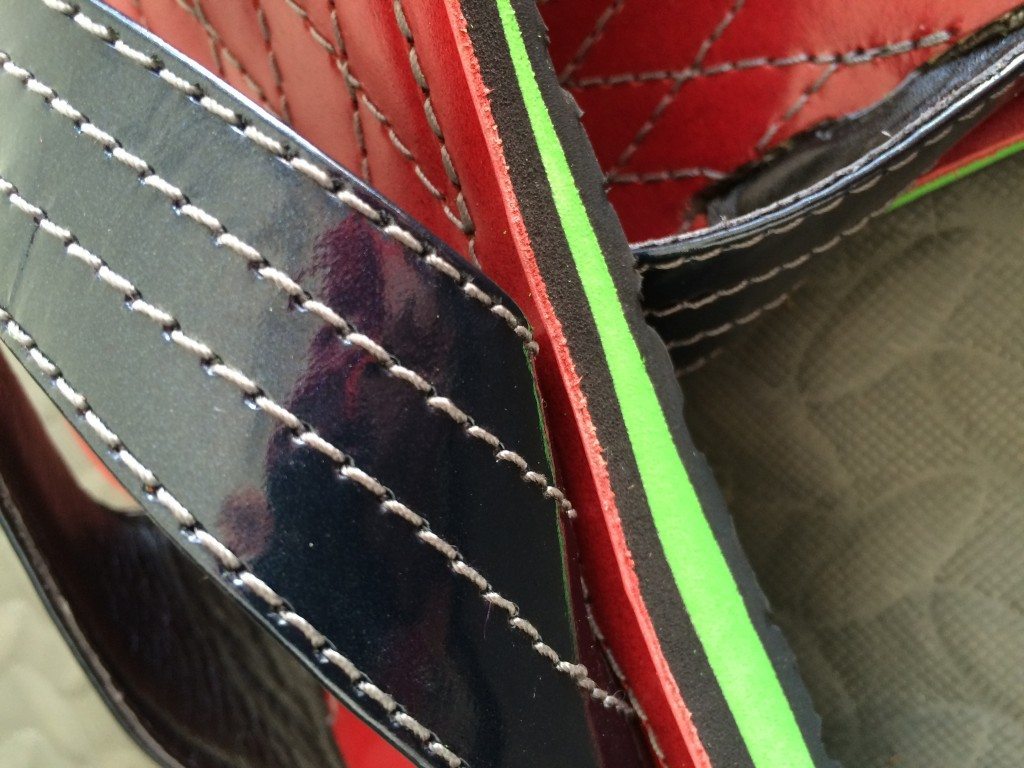 The Story: So, let’s get into their cool story. Most people walk into a store to get a jug of milk when their Eureka moment comes. Not so for West Point graduate and founder Matt ‘Griff’ Griffin. After multiple tours as an Army Ranger Griff was comfortable working overseas so he decided upon his separation from the Army that he’d continue to work abroad. This time he worked as a government contractor in order to improve the combat medical training programs for Afghanistan’s armed forces.

It was during a tour of a factory meant to manufacture Afghan military uniforms that he saw something unusual.  He saw a flip-flop thong punched into the sole of a combat boot. That got him thinking. He went back to his hotel room and that night decided to start a business. He registered the domain name combatflipflops.com and in a short time he was going to affect a lot of lives.

Griff was creating a business that could help the Afghan people earn money building sandals while it simultaneously shared their high-quality footwear with the American public. 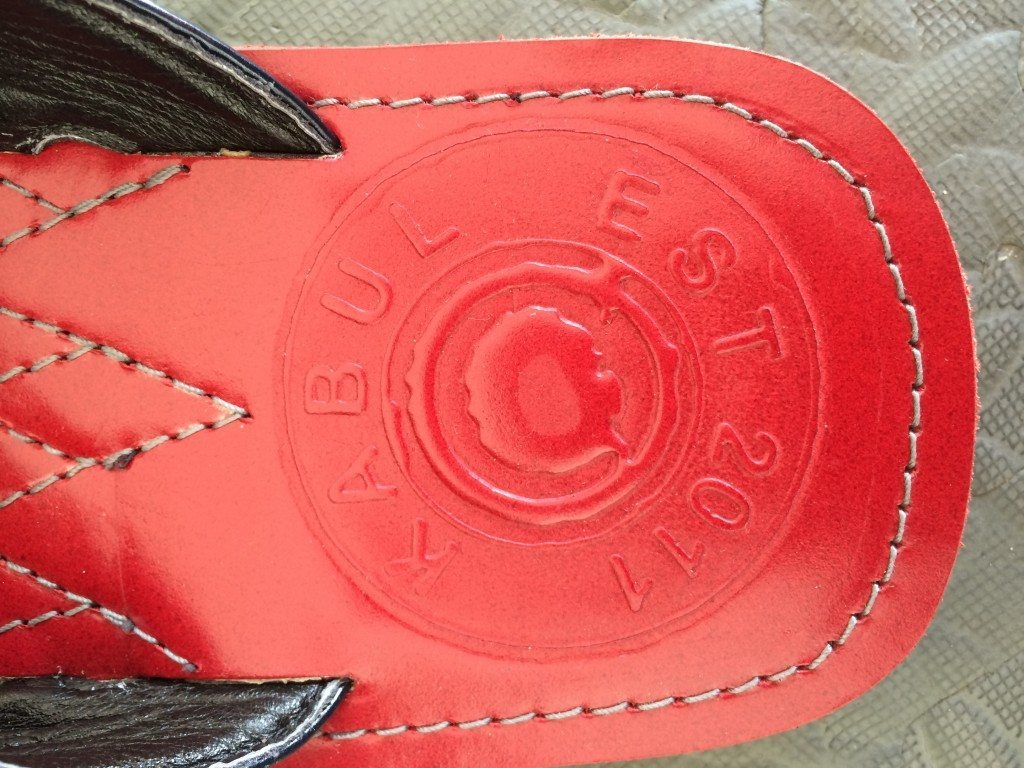 The first run of flip flops were defective. After travelling to the overseas warehouse and seeing the finished product Griff felt gutted. But he was no stranger to challanges. Griff didn’t sell everything he had, nor team up with his former Ranger buddy, just to quit. They re-tooled how they operated the business and pressed on; a factory was set up in Griff’s 600-square-foot garage. From their original failure they did all they could to succeed.

There’s a lot more story to tell about the strength of this brand. In a few weeks Combat Flip Flops will be on the television show The Shark Tank.

Quality: I find it hard enough to find shoes with quality stitching, but these things have it. The stitching is durable enough to withstand more than a regular flip-flop, but not intrusive to the bottoms of my feet when walking. With the stitching stretching from the front of the flip-flop to the bottom you don’t have to worry about the EVA layers coming apart and “talking” like some shoes do. They are made from real cow-leather and not plastic or thinly made rubber that degrades easily over a short period of time.

The pattern on the soles allows for better grip of the ground. This made it a lot easier and safer walking down and uphill and gives a bit more traction.

Comfort: For anybody getting the flops, they’re a bit stiff at first. That’s because they’re genuine cow leather and take a few weeks to break in. I walked on sidewalks, grass, pebbles, and sand and didn’t feel the slightest bit of discomfort. The EVA mid-layers ensured protection for the bottom of my feet unlike most flips flops, which was a surprise.  They fit snug and to fit with little to no stretching throughout. 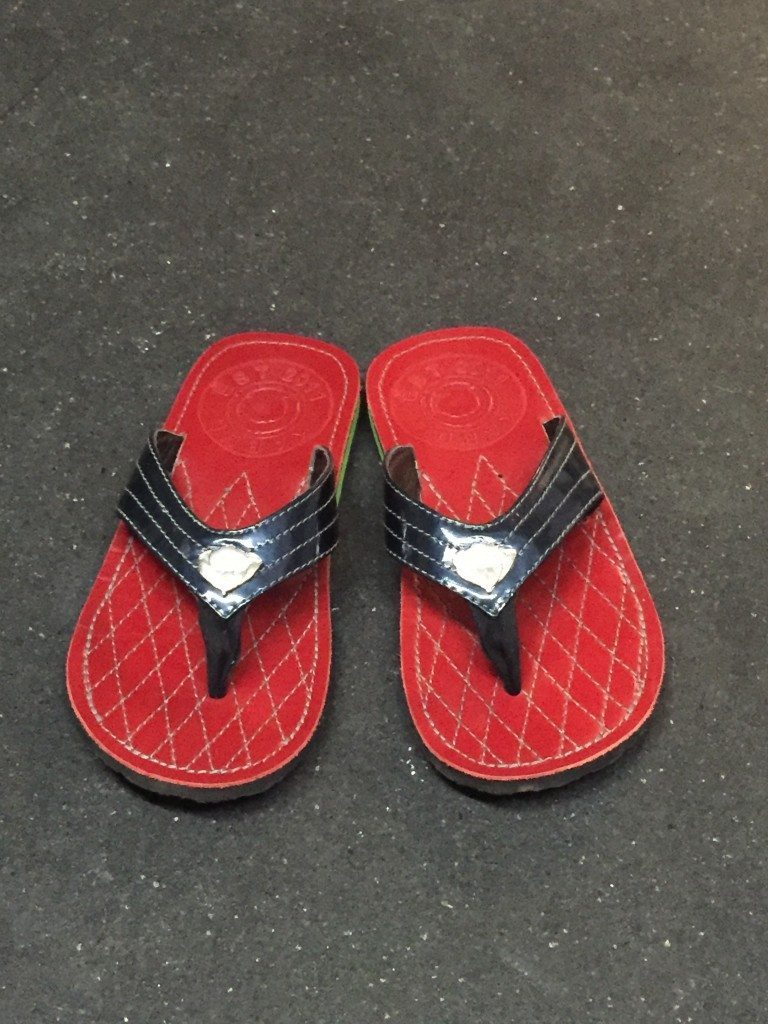 Cushioning: As with most flip-flops the cushioning is minimal however they are very supportive. Beach days, walking around town and a good trek can be done in these because they’re rugged enough to last. Break them in first as the leather will get supple with every use.

Style: Wear with jeans, shorts or wear them buck-naked. Your choice. These things scream style. With most brands, there’s no new tale to tell, but with Combat Flip Flops you’ve got a good one here. Good lines, strong color, thoughtful details such as the poppy flower. The green color against the red are eye-catchers. These have a very natural look rather than appearing too sporty or manufactured. They’re not meant for trekking in the Outback or hunting wildebeests in Africa but they’ll look good if you try doing it. With a pair of Tuck Tucks you just can’t go wrong.

I have to say, this is a post-conflict success story. Can you say Badass?

Faris recently medically retired from the Marine Corps with six years of service as an infantryman. After graduating from the School of Infantry, Faris was assigned to 3rd Battalion 4thMarines in Twenty-nine Palms, California. Following his tour as an infantryman, Faris became a senior enlisted instructor at The Basic School, Marine Corps Base Quantico.

Aside from owning and operating American Military Leaders of Tomorrow and Code Black CrossFit, Faris is studying to accomplish a degree in nursing. Simultaneously, he is also volunteering at a local hospital emergency department in order to become more involved with proactive and reactive care.