Working in the world of firearms instruction, I am exposed to many opinions, from both fellow trainers and students, about what background and experiences are valuable for an instructor to have. There are four main background sources from which instructors most often identify: private individuals holding a basic level of third-party certification, law enforcement officers, those with basic to elite military experience, and those that are the focus of this article, competition shooters.

Reasons most frequently heard to be cautious of, or sadly even outright dismissive of, an instructor with a strong competition background are: one, their focus on sport versus defensive or tactical shooting; secondly, their focus on speed before accuracy; third, the competitor’s specialized guns and equipment. Finally, fourth is a mélange of concepts regarding the walk through of a course of fire, and the argument that targets do not shoot back. It has been the author’s experience these opinions are usually voiced by those with minimal to no level of participation in competition at a high level. Let me then refute these assertations and shed light as to why they are untrue.

The first assertion is the competitor’s focus on a sport with rules is lesser in value than one who solely has a martial, defensive, or tactical approach to their shooting. The logical fallacy lies in thinking a competitor cannot differentiate between the two, removing the awareness of context. A competitor knows they are in a game, and so has a greater ability to not conflate their game with what is jokingly called “in the streets.” This thinking also conflates the techniques of winning with defensive tactics. The competitor clearly sees the difference as they are a part of it, whereas the observer can confuse a technique with a tactic.

The second argument is a competitor is focused on speed to the detriment of accuracy. The opinion reveals a poor understanding of the nature of scoring and the target in competitive shooting. Some quick history: the USPSA metric target and the IDPA target were originally designed to be a facsimile of a human target with the better scoring zones representing what would be considered better hits on a human target. The competition targets most often used in the United States are defensive in origin. Now let us look at their scoring values and how they relate to the idea competitors care only for speed versus accuracy.

The element of time forms a core basis in competitive shooting. Simply put, in IDPA your score is the time it took you to complete the course of fire, plus a time penalty, commensurate with the hits on the target. Good hits add zero seconds to your score, while penalties for inaccuracy can be 1 or 3 seconds, and 5 seconds added for misses and hits on non-threat targets. Basic math skills will tell you that even at 1 second added per “bad” shot, you cannot be solely focused on your time; you must also shoot good hits, or you will not win. It pays to be a winner, and the winner is both fast and accurate. 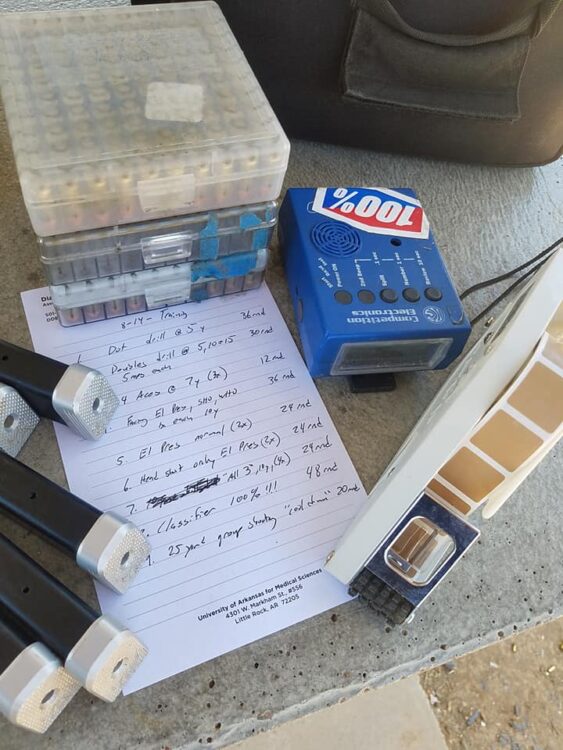 The scoring of a USPSA match is out of the scope of this article, but I will give you two ways to visualize the importance of good accuracy in this type of match. The first is to understand the concept that target scoring areas carry a point value. Usually, these points are awarded by shooting two shots on a target, and in what we have already identified as anatomically good areas for defensive shooting. The best scoring zone, the A zone, is worth 5 points, and at two shots per target, you could score a maximum of 10 positive points for the target. As the target has a range of values, we will look at its absolute value. On the positive side are the 10 positive points. Thinking along a number line the right side would be positive 10. Where an A zone hit was worth 5 points, a miss is worth negative 10, or twice as bad as one good hit. If you shoot one A and one miss on a target, you “earn” -5 points. At best you can earn +10 points per target, at worst you could be facing -30 points with two misses and two no-shoots. Should we start adding multiple misses or no-shoots, you can quickly see, if your sole focus is on speed and not on accuracy, you will not have any points to score. You cannot miss fast enough to win.

The other concept often missed by those saying competitors are too focused on speed versus accuracy is that a make-up shot is always a time penalty. Always. In a match the clock is ticking, if your inaccuracy leads to constant make up shots, you are penalizing your time and lowering your score. It is speed and accuracy, not speed or accuracy. Your score is a factor of the points you scored (hits on targets) in the time it took you to complete the course of fire. Think of it as an efficiency rating, points per second.

But what about the crazy space guns? Again, I think the problem is conflation- the idea that a competitive shooter straps on a Velcro double belt, 4 magazines with 20+ rounds and a finicky race gun on a holster where a puff of wind could dislodge it and heads out the door to do their day-to-day carry. By their very nature, games and contests have rules and competitors follow and exploit them, but they do not confuse them. This statement also misses the reciprocal fact that carry guns and gear are themselves just as specific and tailored to their task as any competition only gun. What is a current trend in defensive pistols? A compact, high capacity 9mm gun with a dot on it. The division known as Carry Optics, provisional in USPSA in 2015 drove the development of what you see being used today. And there are extremely popular divisions in both USPSA and IDPA where one can shoot a stock, service size pistol.  Competition can, and has, driven innovation in the pistol market and will continue to do so.

What about the notion of walking through a stage or scenario before shooting? The “you don’t get a walk through on the streets” idea and that “cardboard targets don’t shoot back.”. The idea a walk through is bad for you is another logical fallacy, a hasty generalization. Who else trains on targets that do not shoot back? Who else practices something on the range or in a shoot house over and over before they ever do it live? Every single police and military unit, that is whom. From the most basic to the most elite. Even force on force training has guidelines and objectives. There is only value to be found in increasing good training repetitions, and they can all be maximized by walking things through and using targets that do not shoot back. An often-overlooked skill of a competitor but of immense value, derived from walking through a stage before shooting it, is to turn imagery and self-talk into subconscious action. Performance without thought, or as Bruce Lee said, “Thinking is the enemy of perfection”, when it comes to high level, physical performance. 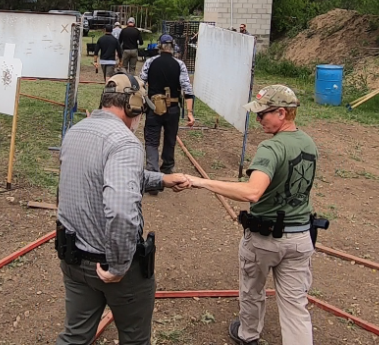 Now that we have refuted some common misconceptions or negative opinions about the nature of competitors and competitive shooting, I would like to define just what good shooting is, regardless of your background. The best definition I have heard of what good shooting truly is comes from Bill Go, LtCol USMC (Ret) and former Blackwater Firearms/Tactics Instructor. “Good shooting is doing the fundamentals perfectly, every time, at speed, on demand and in conditions not of your choosing.” When I asked Brian Enos about competitor’s skills and successful shooting and he said, “For consistent success, the most important skill you must master—and repeat for every shot you fire—is shot calling. Rather than the goal of shooting being to hit the target, the goal should be to know where the bullet will hit the target as the shot fired.” Great competitors strive for this higher plane of awareness!  Competition shooting encapsulates every single one of these principles.

Having now a good working definition of what good shooting, competitive or otherwise is, then let us define just what is a good competitor. A good competitor is someone who has reached the classification of Master or Grand Master, preferably in multiple divisions. They train and compete regularly and participate in matches beyond the local level. They have a demonstrated skill level above average by their classification and they compare themselves against others locally and up to the national level.

Having looked at the commonly stated reasons why competition shooters might not be great instructors, let us now examine the positive traits and skills of a good competitive shooter. First and foremost, they are ranked on a national level against a known standard, the basis of their classification as a Master or Grand Master. From the last publicly available data, only the top 5% of USPSA members ever reach one of these classifications. No other background has such a formalized way on a national level to rank a shooter’s ability than do the competitive shooting sports.

To get to this point a good competitor must practice, and regularly. We all know shooting is a perishable skill. The shot timer you use personally in dry fire and class was designed for competition originally. The dry fire books you use or recommend to those who want to improve are written by competitive shooters. Because a competitive shooter must excel against other shooters of similar skill level, everything in the process is looked at, recorded and an attempt made to improve. Good competitive shooters use the data from the shot timer in practice sessions to chart every aspect of their performance. The video of match performances and seeing yours and your competitor’s data provide insight into your improvement process. No other background has this intrinsic to its process. You cannot take comfort in your current skill level as a competitor, or you will be left behind.

So, what is good shooting? Doing the fundamentals perfectly, every time, at speed, on demand and in conditions not of your choosing. The best way to assess this in yourself is through competition. If you are a potential student and reading this do not feel warry of an instructor with a strong competition background. If you are an instructor and you have no or little competition experience, take an honest look at your preconceived notions of it, and instead see what you might gain from it. As firearms instructors, it is our duty to grow and improve our skill set and competitive shooting is certainly an excellent pathway to your improvement. Brian Enos has said to me, “I don¹t think most shooters understand the importance of knowing the difference between fundamentals and technique. The importance of total reliance on the fundamentals always, particularly in unfavorable and stressful conditions.” Mastery of competition is mastery of the fundamentals, which is something we all want to pass on to those we instruct.