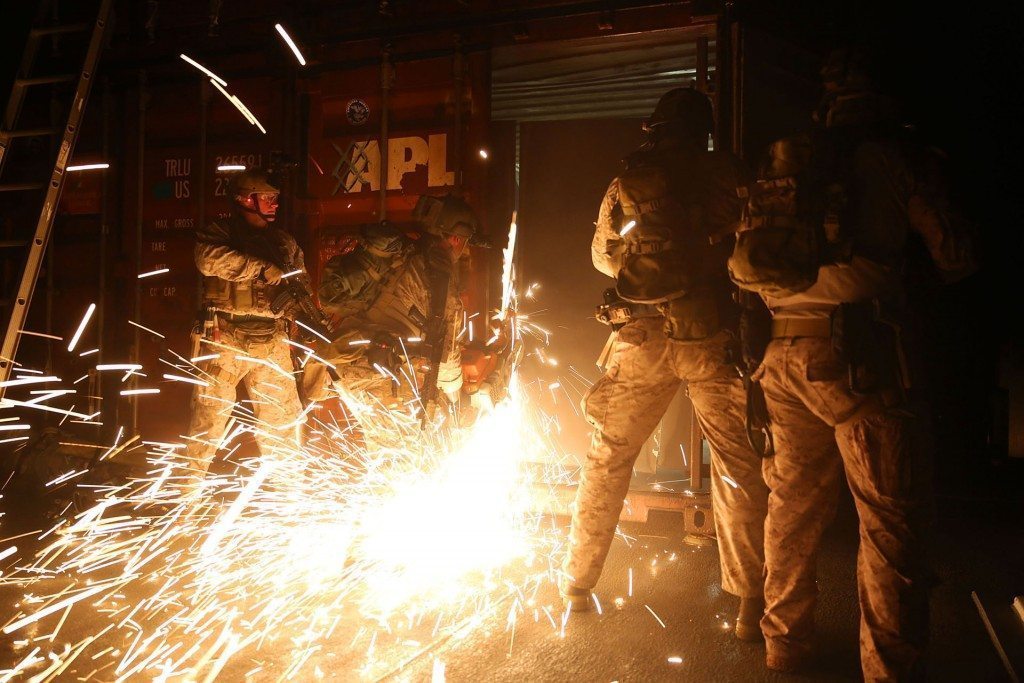 Let’s discuss the Raptor. “RAPTOR” itself is an acronym that stands for Rapid Assault Police Tactical Operations Rescue Tool. Kurt Delia, a master breacher, SWAT officer, and founder of Delia Tactical built the Raptor because he needed a way to make his job easier and ensure he didn’t lose lives when doing his job. He needed something that could give him forcible entry into buildings, vehicles and locked enclosures.

Anyone familiar with breaching tools knows these instruments are a pain to carry. Carrying an effective breaching tool provides the user the ability to breach outer doors to get into a building and continue to breach doors inside too if they need to. Teams want to maximize their dynamism and not be held back by obstacles. A tool should not retard effectiveness and carrying a heavy, unwieldy one can do just that. It should allow the user the ability to pound, pry or puncture nearly anything.

Kurt began construction on the original Raptor many years ago. What started as a garage project developed into a smart business because police officers where requesting one for their own department. Kurt realized it made more sense to combine four breaching tools into one easily portable tool. He combined the single features of the sledge hammer, forked pry-bar wedge, axe and a ram striker in order to create this killer tool.

Weight, time and space are three factors that can affect teams from kicking in doors expediently.

WEIGHT: The breaching tool shouldn’t be so heavy as to make it a pain to carry or too difficult to swing into an object.

TIME: Poor material choices and a weak design reduces utility and will slow a user down; teams have to hustle to the target and then choose from multiple items to breach an obstacle.

SPACE:  If you’ve every rolled around in a vehicle as if it were your mobile office then you know space needs to be at a maximum. The Raptor can help conserve trunk space. Carrying the Raptor on your body is made simple by using the sling or a shotgun sheath.

It weighs in at 18 lbs. The overall length is 30″. The majority of the length of the tool is in the handle. The handle is 1″ diameter cold-rolled steel covered by a 1″ rubberized non-conductive grip. The padding on the grip is excellent and gives you maximum purchase when being used for breaching.

Readers should know that the Raptor can be custom made for any unit that requests it to be modified; the length of the handle can be shortened to a very workable 18″-24″.  In the video below Kurt demonstrates the over the shoulder carry with a sling; mind numbingly simple. Kurt can send this out to any military unit looking to give it a go. 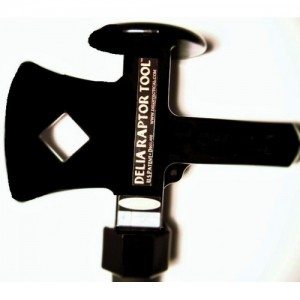 Saying that I am disappointed in the non-review I was to receive from a Marine acquaintance is an understatement. I sent the Delia Tactical Raptor Tool to someone who was supposed to place it in the hands of MARSOC cadre. We figured it they’d be a great unit to use the Raptor Tool at their Urban Breaching Course at Stone Mt. No fault of theirs at all. My understanding is their assessment of the Raptor was quite good but the follow up by my contact wasn’t. it would have been interesting to see how VBSS used it too.

We didn’t get an article or a single photograph out of our donation but this doesn’t mean we can’t give you an honest assessment of the Raptor Tool from our point of view. The Raptor is currently being used by 100’s of police departments in the United States; It has been put in the hands of US Special Forces members too. Some very positive reviews have been written about it and so there is much good information on the Raptor to cull from.

In this day and age of scumbags and whack-jobs we are seeing the need for first-responders to get on their target quickly. History shows us that tragic events like the Beslan School siege,  Amish massacre, and the  Virginia Tech shooting are not going to slow down and the top priority is to get inside and get in the fight. The Raptor can open up any standard and hardened security portals.

The military doesn’t encounter too many barricaded subjects so there isn’t much need of a breaching tool while you go throughout a structure. Active shooter responses are handle according to set policies and circumstances. But there is a place for breaching tools in the military world.

The constructive critique that came from the Marines was the Raptor was a great tool but too heavy for long-term carry. That’s understandable as stateside SWAT units are generally ‘hitting’ a solitary home or business while military units can’t always refresh; generally they are moving from house to house without respite. Active shooters and barricaded targets are regarded and handled differently.

The Raptor is light, considering what it does, and it’s definitely lighter than the Blackhawk kit, or a sledge, haligan and cutter put together. It’s also super easy to carry on your person or on a pack. 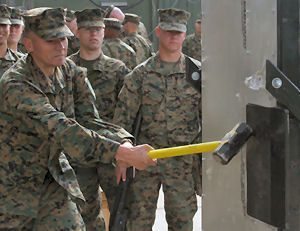 A tool like the Raptor can even be used in SAR (Search and Rescue) events. While it is typically used for SWAT teams keep in mind its versatility. There is also an opening wrench that can be used on fire hydrants. The Raptor can well serve non-law enforcement departments, military units and preppers; Katrina, Sandy etc…just to name a few.

It can be used as a weapon if needed; no one should have to run back to a vehicle for an item they should have brought the first time to the fight. The Raptor will chop or break through windshields, wire, ice, concrete columns and blocks, locks, numerous exterior entry doors and more. It can be used to open crates and punch through steel drums too.

Here are some of the features:

Axe Head: The axe head works effectively on wooden cross-supports and sheet rock and handles them with ease. Interior doors are no different and can be punched or chopped through easily. The ax head isn’t too large and is counter-balanced fairly by the straight-hammer on the opposite end.

Ram Striker: The effectiveness of the 3/8″ plate steel ram striker on the Raptor comes from the unit’s weight, shape and how fast you swing it. It will bite into any surface as you smash into them.

Hammer: The hammer works effectively because it has the proper length and weight to it. It is long enough to punch through doors and thick enough that it won’t get caught in a door as a narrower spear-like head would. Great for battering.

The Raptor seems pricey but it’s not; at $409 dollars shipped to your front door it is still cheaper than adding four individual items together. As a small business it can’t scale the way big companies like Blackhawk can. Your greenbacks go to supporting a small business that makes a good product. It comes in black, red, blue. It’s listed at $369.00 on Amazon. Zombies, scum-bags and everyone beware-The Raptor will jack you up.