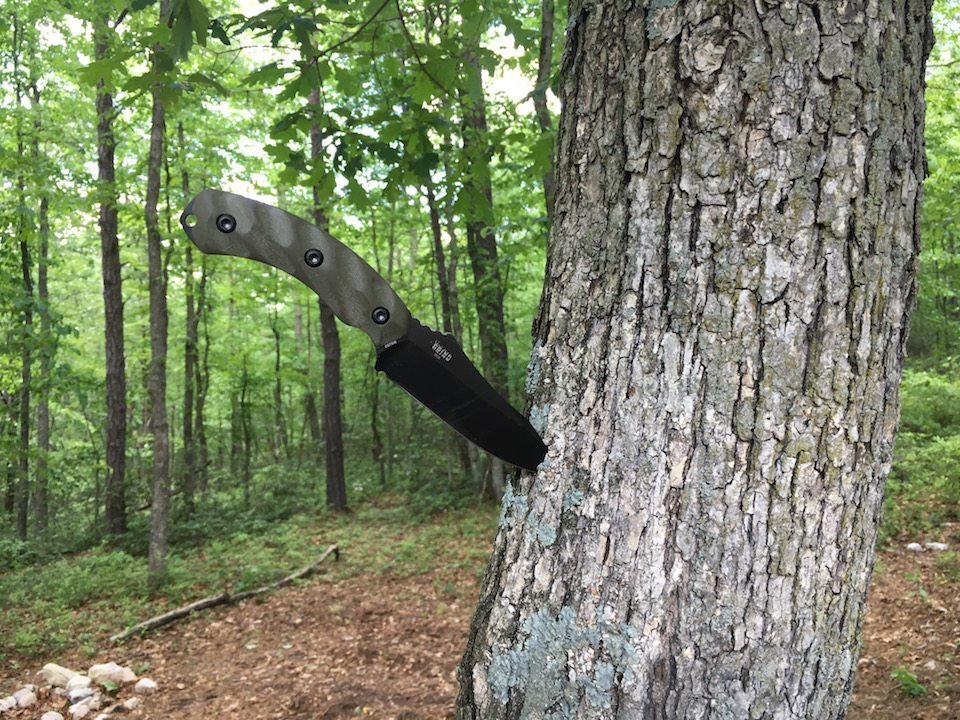 My dad was reckless.  It was a different time, but even for the late 70’s giving your 5-year-old son a Swiss army knife and letting him play unattended probably wasn’t the smartest move.  I can probably see where my lack of risk averseness comes from, but that’s not pertinent to this particular body of work.

I’ve had a knife in my pocket or in my hand nearly every day since then.  Literally hundreds of knives; boot knives, butterfly knives, hunting knives, big buck knives, all before the time I knew anything about them, except that I always had a strong internal feeling to have one on me.  That feeling grew, and as my income increased so did my taste for quality knives.

When I joined the military in my early 20’s it was a perfect fit.  OF COURSE I needed a knife on me!  Who cares if I was a computer geek and spent my days troubleshooting 82 pin cable connectors?  What was important was that I had a folder, a multitool, and a flashlight on me at all times.  And then I decided to change things up.  I decided that I wanted to be a survival instructor, and clearly that meant I needed a real knife.  A knife that I could skin game, build a shelter, kill a bear, you know, all the normal survival tasks.  That knife was a Busse Steelheart IIE, and the E meant the handle had a bit of a curve to it, and that curve meant it was very ergonomic in my hand. (This ISN’T a review of that knife, only used for reference) 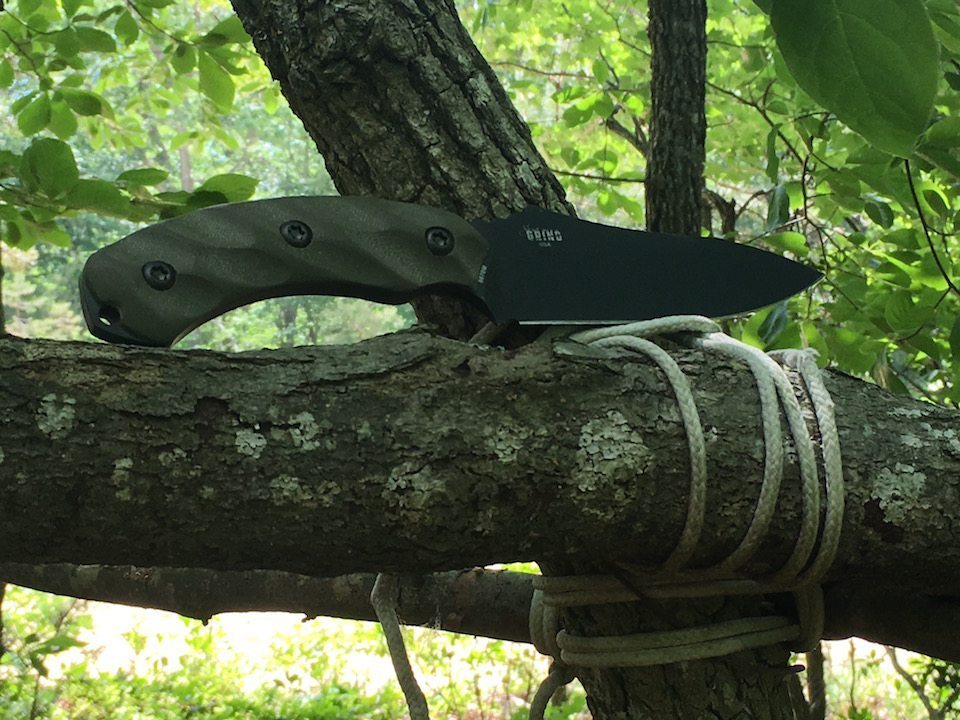 Wow, that was longwinded.  I said everything above to get to the review of the Jackal Knife from Southern Grind. As soon as I opened the very well packaged knife, I picked it up, drew it from the perfectly fitted sheath (more on that later), and knew it was a great knife.  You see, I’ve had hundreds of knives in my hand, and I’m sure many of you have too, and these days I know immediately if the knife is for me.  It felt great in my hand, in large part due to the curve of the handle, not as drastic but similar to the previously mentioned Busse, but also because of the scalloped G-10 scales, and the blade not being too thick or too long.

Let me back up for just a moment.  Like all things, one should apply the right tool for the right job.  So what is the “job” of this particular knife?  It’s a fixed blade knife with a 4.75 inch long blade and 9.25 inches in overall length.  It’s got a full tang, and a pseudo clip tip.  It’s got plenty of belly in the blade and it’s big enough for most chores I’d use a knife for, except the largest of chopping jobs. 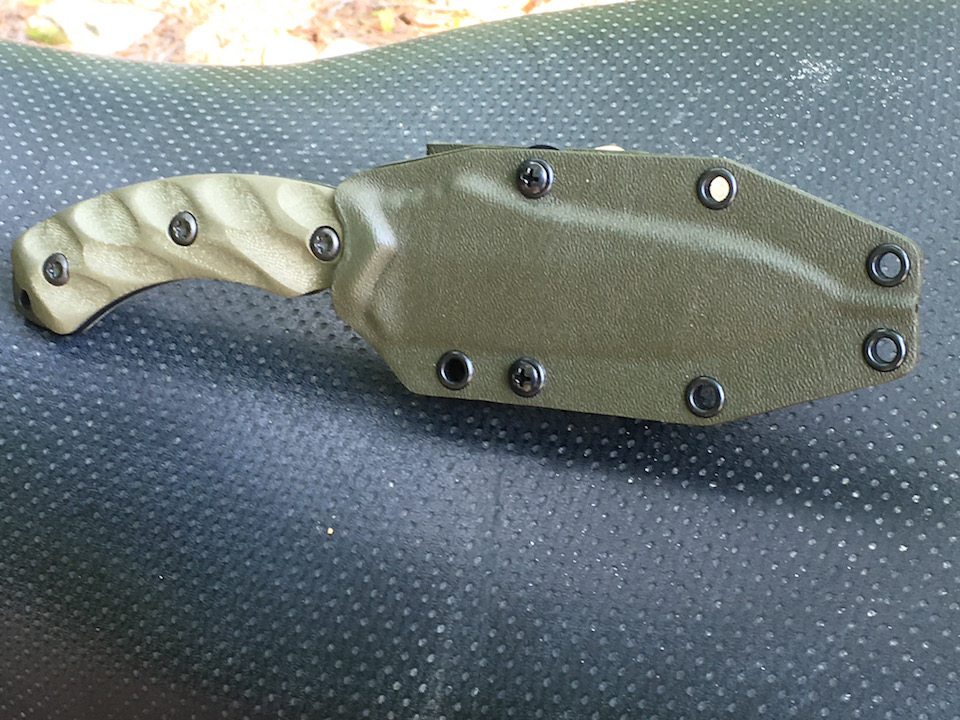 So to answer the original question, what is the job of this particular knife, I think the answer is almost anything.  It’s a great all around knife.  It feels great in the hand, except under long hard continuous use.  It’s extremely sharp out of the box, and should keep a good edge if the user does their part.  What I mean is ANY blade will dull with use, but if the user touched up the blade occasionally, and especially before a knife gets too dull, the blade will remain serviceable for a very long time.  It’s big enough to count on for real knifework, but small enough for detailed work and carries small and light, which is always a good thing.

I started taking the Jackal with me on several outdoor excursions, but the first thing I did was throw the sheath on my belt oriented horizontally to see how it concealed and how well I could get to it.  The sheath holds the Jackal very well, and the belt attachment worked well, but for this kind of “do it all” knife I’d prefer to have a tek-lok attachment to add to the diversity of mounting options.

I took the knife with me on some motorcycle trail riding, knowing I was going to get into some mountainous woodland areas and I wanted to use it for some of the normal camping or outdoor tasks one would ask of a knife like this.  I pulled over to a previously used campsite and started making some repairs to the existing shelter structure.  That meant I needed to cut down some small saplings to replace the existing dying ones.  This was a pretty tough task for the Jackal because it’s not quite big enough for chopping, but the sharp blade and the curvature of the handle made it a passable duty for anything under about a 1-inch diameter.  Clearing the smaller branches off the saplings was an easy chore.  One quick swipe of the blade easily removed them. 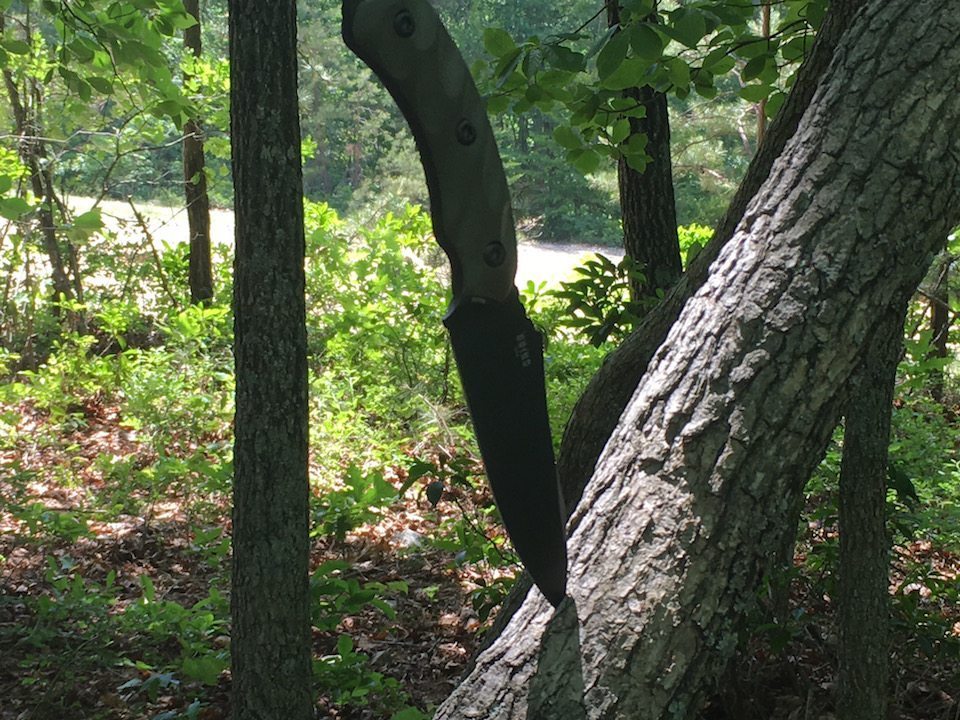 Next I used the Jackal to cut the 550 cord to replace the existing rotting cordage that kept the shelter frame together.  I cut what I needed, but then continued to cut 550 just to see how well the blade held up, especially after some chopping.  I noticed no perceivable dulling or difficulty cutting through a few pieces of 550 at a time.

The final chore for this short adventure was starting a fire.  This actually involves a few steps with a knife, and if you don’t have a decent sharp knife, life becomes a bit more difficult.  First, I used my knife to acquire some dry dead wood.  The ground was damp from some earlier rainfall so I had to use the Jackal to remove some of the wet outer wood to get to the dry center.  Then I had to whittle down some of the dry wood to create some tinder (yes that’s a term used before the dating app).  Because I knew the kindling would most likely be damp I made sure to make much more tinder than I normally would.  Again, the knife showed no signs of dulling.  I continued to get long strands of thin dry wood for my tinder.

Once I gathered some fuel to sustain the fire I began shaving the magnesium from the “mag-block”.  This is where you’ll know if a knife can hold an edge.  Carving a magnesium block to get the small flakes for igniting a fire is torture on a blade, but it held up great.  Once my magnesium shavings and my tinder were ready I pushed the blade of the knife into the side of my boot and pulled the ferrous rod against the edge of the blade to create a spark. 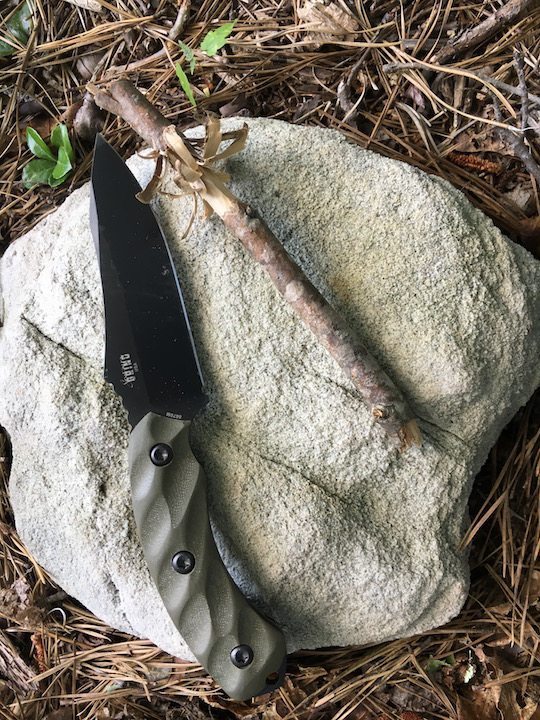 On a side note, this is BY FAR the biggest mistake I see people make while building a fire.  DON’T push the knife away from you to create spark.  You risk knocking your hard earned magnesium and tinder all over the place and having to start over.  Not fun when you’re cold, wet, and tired, in the dark.  Keep the blade in place with the tip held against the rubber sole of your boot and draw the rod back toward you.  With practice and a little aiming the sparks will fall right into your tinder pile.  You’re welcome.

Once the shelter frame was completed, and my small fire had run its course I fully submersed the few charred pieces of wood in water and cleaned up after myself.  I put the Jackal back on my belt and jumped back on the KLR650 to finish out the trail ride.  It was a complete luxury knowing I had a fixed blade knife that could handle almost any chore I threw at it.  My only very small complaint is that after so much use cutting the saplings, creating the tinder, and shaving the magnesium, the handle began creating a small blister on my hand.  Not a huge deal at all, and happens with most knives.  I’ve only had a couple knives where this was a non-issue.  It’s often a tradeoff between long term comfort and having a great grip in multiple environments like when the handle is wet from rain, blood, or just perspiration.

Overall I really like the Jackal.  It’s a terrific all around knife.  It’s affordable enough for the materials and sheath you get.  It feels great in my hand, like it’s an extension of me.  It’s big enough to handle most tasks, yet small enough to not be cumbersome.  It holds an edge very well, and the blade shape and geometry allows for multiple applications.  Aside from the very minor issues mentioned (tek-lok and long term grip fatigue) this is a knife that hits all the marks of a perfect investment.

Disclosure of Material Connection: I received the Jackal Knife from Spotter Up. I was not required to write a positive review-Josh B.