The Army did it. The Coast Guard has been doing it, and the Air Force said we’re doing it too… The transition to Sig Sauer M17 is official. It is intriguing from the perspective of new weapon fielding, training, and feedback. It’s exciting, because changes like this and on this level don’t happen often. And as usual, it’s a source of discussion and debate. We at Spotter Up could not pass up the opportunity to work with the new GI pistol, for what will likely be a two-part write-up on the weapon. This is not our first Sig Sauer review, and on behalf of the team, I’d like to thank the company for being so easy and professional to work with. I must also apologize to for taking the extra time to complete this review.  Aside from the workload itself, I wanted to really get familiar with the weapon, rather than doing a cursory impression of the first 2000 rounds.  I also wanted to compare the M17 to my current P320, as the two platforms are essentially the same, minus the safety lever on the M17.  This review may also be a bit different from the traditional gun flicks. 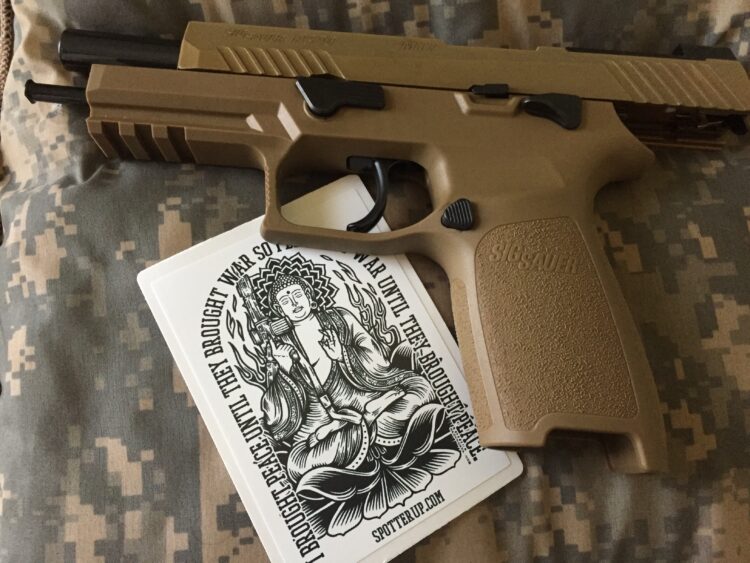 There will likely be no videos of the weapon being fired, and the resulting beauties of bullseye groupings.  While the groupings were impressive, the human element is the overall tester, and so the call of how accurate the grouping is from one range day to the next does not always speak for the weapon. The goal here was to provide a realistic feel and feedback for the weapon platform, discuss the fielding process, performance elements, and design features. As much as I try to give the spotlight to the item at hand, this review begs some comparisons. The weapon being replaced by the M17, for better and worse, has earned its place in US military history, and performed in the field for generations of service and dozens of conflicts. It is also worth stating up front that while this article will focus on M17, the “civilian” counterpart being Sig Sauer P320 has been in service in many law enforcement agencies and several configurations for some time. The U.S. Coast Guard has been using the P229, and while a separate and a hammer-fired platform, speaks to the tenacity and sea worthiness of Sig Sauer as a whole. 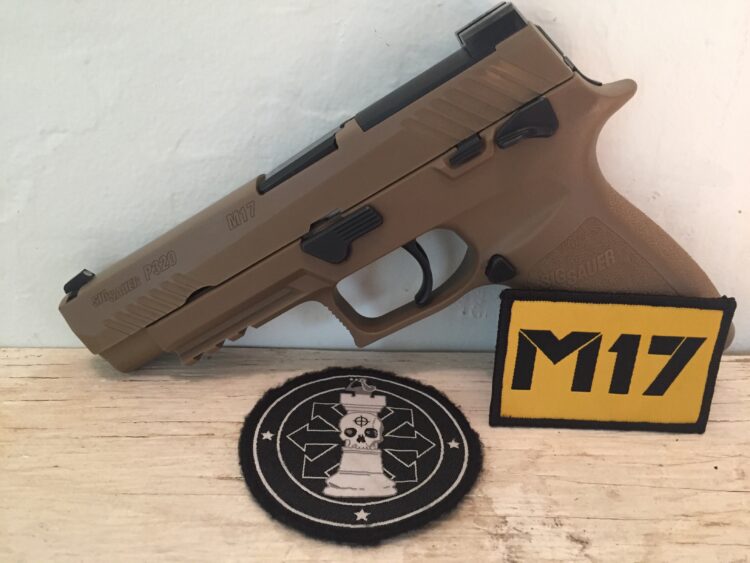 There are, of course, several reasons for the switch. Maintenance, modularity, flexibility, training, and budgets are all factors. Often many of those are codependent.  For example, to maintain an inventory of aging firearms, sometimes it is more cost effective to go with a replacement.  However, these are better suited for one of Spotter Up podcasts, and the focus here is on the weapon, the tool and the company. Of note is history of Sig Sauer, whose roots go as far back as 1853 and the first contract thought by the Swiss wagon makers, the Swiss Army. The now all-recognized name and logo of Sig Sauer did not become a thing until 2007. Not the least of the company’s attributes, and to me one of the most unique, is the Sig Sauer Academy. It has been on my list of school to attend since putting on the uniform, and more so after a buddy took several courses and taught there.  It is one thing to offer a weapon platform, optics, excellent service and even ammo.  But to back all of that up with tier one instructors who cater to the drinkers of knowledge cool aid in the audience, is a step beyond marketing alone. 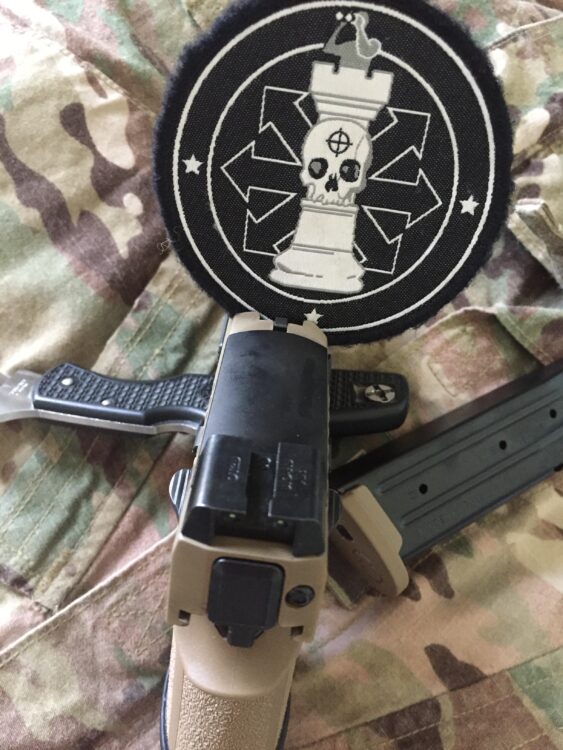 With the new US manufacturing facilities and technological expansions, Sig Sauer started making air/airsoft guns in 2015. They also sent an air gun version of the M17 for this review. There should be no surprise that the airsoft works well for training, and the manufacturer focused on every detail to make sure that the air versions feel and function as much as the real deal.  While I didn’t spend nearly as much time with the airlift version of the M17, as noted in the previous article on that line of Sig products, the training element cannot be understated.  Much like dry firing the actual weapon, the air operated platform enhance grip, trigger squeeze, sight picture, repetition, and every element of move-shoot-communicate a gifted instructor wants to throw into training.  Before doing the review, I also asked the Sig Sauer reps, who in turn posed the question to their engineers…  What can I do and not do with it?  Can I submerge it in water, dirt, snow?  Can we use awesome ammo, crap ammunition, reloads…?  What about the annoying drop test, can I do that?  I got the green light for all.  Before we move on, let’s get that question out of the way.  What of the drop test?  Try as hard as I might, I found only one instance of the “confirmed” and former issue.  While I found a lot of debate about it, I didn’t find one reputable source who could conclusively attribute the issue to the weapon.  Be that as it may, the company immediately remedied the issue, and no one heard a thing about it since.  As a point of proof, I have rigged quite a system to do my own drop test, but ultimately decided against it for two reasons.  Safety and necessity.  I could not find enough reason to do it, to sacrifice the overall safety.  Now, your average grunt will and does drop the weapon in a variety of environments.  As one Marine assigned to our task force once said when his M4 went flying across the MRAP floor “that’s why they tell us to keep one out of the chamber.” Wait, what?  No worries here, troop.  The M17 has several internal safety mechanisms and with that lever on the outside, anyone is sure to know that your dropped weapon will not discharge.  (His Gunny and I had a talk later)

The M17 we received for review was a standard issue, and had a coyote colored frame and slide, with some nice touches of black on the trigger, magazine and slide releases, takedown lever, safety lever and sights/night sight plate. Complimenting that, were the black barrel and spring guide rod visible from the front. The M17 came in a nice case, with 2 17 round magazines, some swag, instructions and a lock. Immediately my FFL guy and I started dry firing the weapon, field stripping it, and comparing it to the P320. I dry fired this weapon a lot. What took me by surprise is the click of the trigger sounded kind of plastic-like. I don’t know why I was hung up on it, but I compared it to several other handguns. I then handed it over to a buddy and asked him to do it. The sound and feel of the dry fire on M17 did not give the expected metal “ping”. Ultimately, I think this has to do with the assembly housing and high-end plastics, but the sound had nothing to do with how the trigger felt. The approximately 4-pound trigger was sharp, light, and definitive. The slide on reset snaps back in battery like a thoroughbred busting through the gate. Back to this later.  The M17 is a solid looking handgun, and feels solid in hand. The busty grip is comfortable to control and manipulate during transitions and reloads.  While some of the appeal of the M17 to DOD customers is its modularity, it is doubtful that any branch will offer more than one grip option.  While the M17 predecessor had no such option, I don’t think the weapon’s size or profile would be an issue for shooters of different stature, hand size, or experience.  What is noticeably easier and more effective compared to the M9 is field stripping and cleaning the M17.  And this weapon did need a lot of cleaning.

Online some of the other T&E points, I felt it is necessary to get the weapon dirty, really dirty.  As a platform designed to functioned in a multitude of hostile environments and temperatures, and ones which may not allow for prompt cleaning of the weapon, part of its reliability is consistent operation when fouled.  As you can tell from the photos, aside from many rounds of dirt-cheap ammunition, the weapon was dirty.  With that, the only issue occurred when the firing pin struck an actual piece of muddy earth.  I don’t call this a malfunction, because it was not related to the weapon system itself.  This was immediately cleared, and continue to fire as accurately and consistently as it was when fresh out of the box. As such, I had zero malfunctions with the M17, regardless of grip, ammunition, rate of fire, or cleanliness.  This leads to a conclusion that M17 is probably more forgiving across the board as compared to the M9, and as such a more trainable weapon platform for the “new” Army.

One of the most impressive features in my opinion, and one which may be effecting the awesome functionality of M17 is the spring and slide combination.  While both are heavy duty, particularly for a 9mm, the spring is probably the most impressive I have seen on a handgun, including some .45s.  When cycling the weapon manually, one can’t help but notice how definitive and responsive the slide functions.

Overall, the M17 was very much fun to shoot.  With the responsive factory trigger pull, the trigger reset is almost unnoticeable.  Whereas some firearms have a distinctly palpable or audible click, if you don’t focus on feeling the reset of the M17, you may miss it.  The rate of fire and multiple rounds on target would be exciting for any gun enthusiast.  Of course one of the main appeals for the M17 and 320 platforms is modularity.  I doubt that the Army was influenced by this as far as the end users are concerned, but the ability to maintain and sustain an inventory of firearms is certainly enhanced having parts that can be swapped basically in the field.  As far as the layman consumer, the modularity combined with the classic Sig Sauer reputation and reliability can not be understated.  Not the least of the flexible features, is the ability to swap the sights, and utilize micro red dots and similar optics.  This makes the M17 and its sister models a top choice for those who carry for work, play and competition. I received this product on loan as a courtesy from the manufacturer via Spotter Up so I could test it and give my honest feedback. I am not bound by any written, verbal, or implied contract to give this product a good review. All opinions are my own and are based off my personal experience with the product.