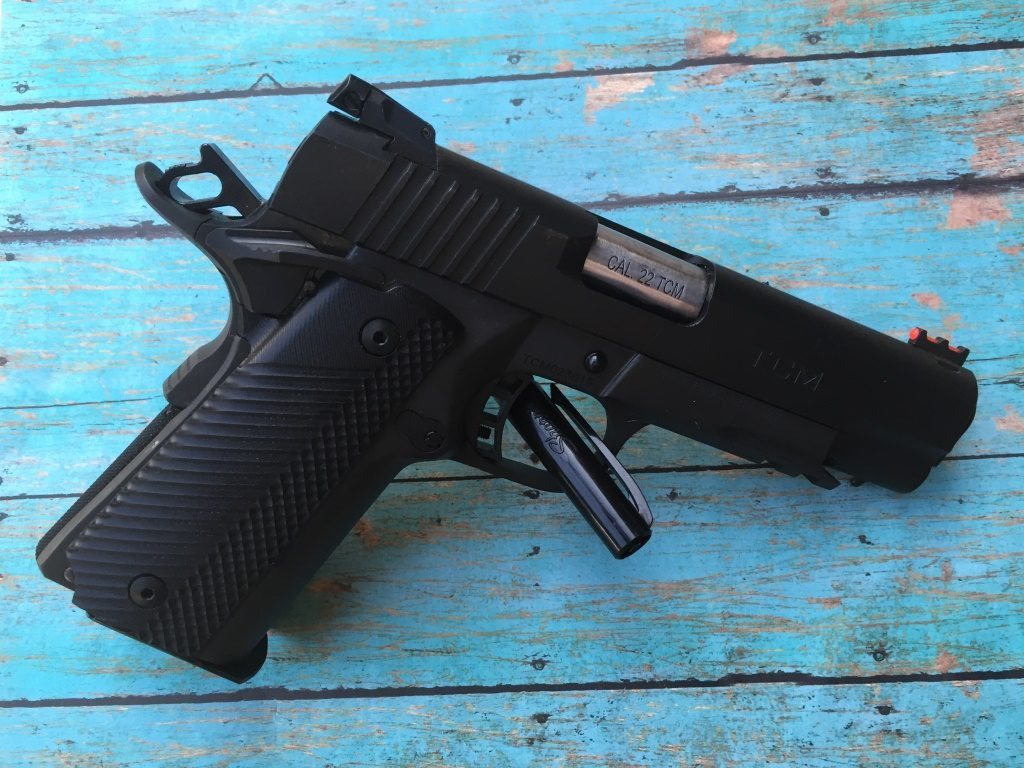 All images by Wilfred Rodriguez

Rock Island continues to plow new ground with the venerable 1911.  That’s a tough task with a gun that has a 100+ year history.  Rock Island doubles down on the innovation by introducing not only a dual caliber pistol but also chambering it with their potentially breakthrough 22 TCM round, a round that could be the first real .22 round for personal defense.

I had the privilege of shooting several hundred rounds of the new 22 TCM round as well as 9mm through the TCM TAC Ultra MS HC Combo  1911 (MS = mid size, HC = high-capacity).  I love the flexibility of having one gun with two different caliber barrels.  While the jury is still out on 22 TCM having the ubiquitous 9mm coming out of a 1911 minimizes the risk and uncertainty of 22 TCM.

The pistol features a traditional parkerized finish.  My sample gun had no blemishes and even application throughout which just makes Rock Island Armory’s logo (forward of the hammer, left side of slide) stand out.  “TCM” is roll stamped on the forward right side of the slide and M1911 A2 MS – TACT MM is etched into the right side of the receiver.  My sample came with the gun, two fired 22 TCM casings, a 9mm barrel, recoil spring, sight adjustment tool and allen wrenches. 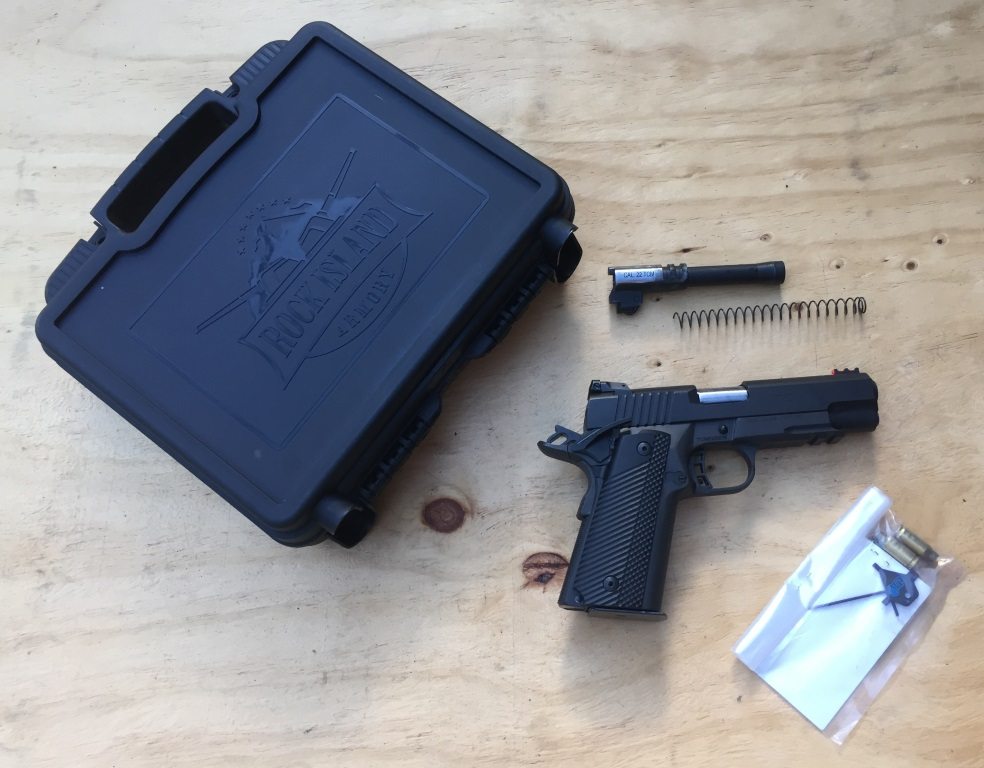 The “TAC Ultra” assembles and disassembles like a traditional 1911.  It does come with some extras though one would expect on a higher end model.  Specifically, she sports a full guide rod, ambi safety, adjustable trigger, short picatinny rail, fiber optic front sight and adjustable rear sight.

The all steel gun weighs a solid 2.56 lbs empty and a little over three when it’s loaded with its whopping SEVENTEEEN round magazine.  This feature silences those that often point out the traditional 1911’s comparatively small magazine capacity.  Owners of this gun will very likely have more rounds than a large number of guns on the firing line or in the self-defense holster.  Unfortunately I understand production models of this gun only come with one magazine.

The “TAC Ultra” isn’t a small gun and while I have large hands, even my wife’s much smaller hands found the gun to not be oversized.  The “TAC Ultra’s” grip was 36mm x 52-56mm (width x depth) to a 31mm x 54-58mm on a Glock 19 or a 31mm x 52-59mm on a Glock 17.  (The bottom part of grips tend to flare as measured from front to back.)  I found the checkered and ridged grips abrasive enough to ensure a good grip but not uncomfortable after a 200-300 round session of shooting.

Despite a burning desire to immediately go to the range immediately I spent some time dry firing the “TAC Ultra”.   The 22 TCM slide is pretty easy to rack.  Those having issues racking a 1911 will be very pleasantly surprised with the “TAC Ultra’s” 22 TCM slide.   The 9mm spring gets the slide rack pull weight just shy of my .45’s according to my “calibrated hand”.  I found the checkered slide release to be a just awesome.  It’s much easier to manipulate with either thumb.  I like it so much I’m probably going to do it to my personal 1911’s.  The oversized ambidextrous safety worked as one would expect.  The trigger has no take up and breaks crisply at a little over four pounds.   Rear sights are adjustable with the accompanying tool by turning the flat tip screws for windage and elevation.  The rear sight has two white dots.  The front is a red fiber optic that’s easy to pick up. 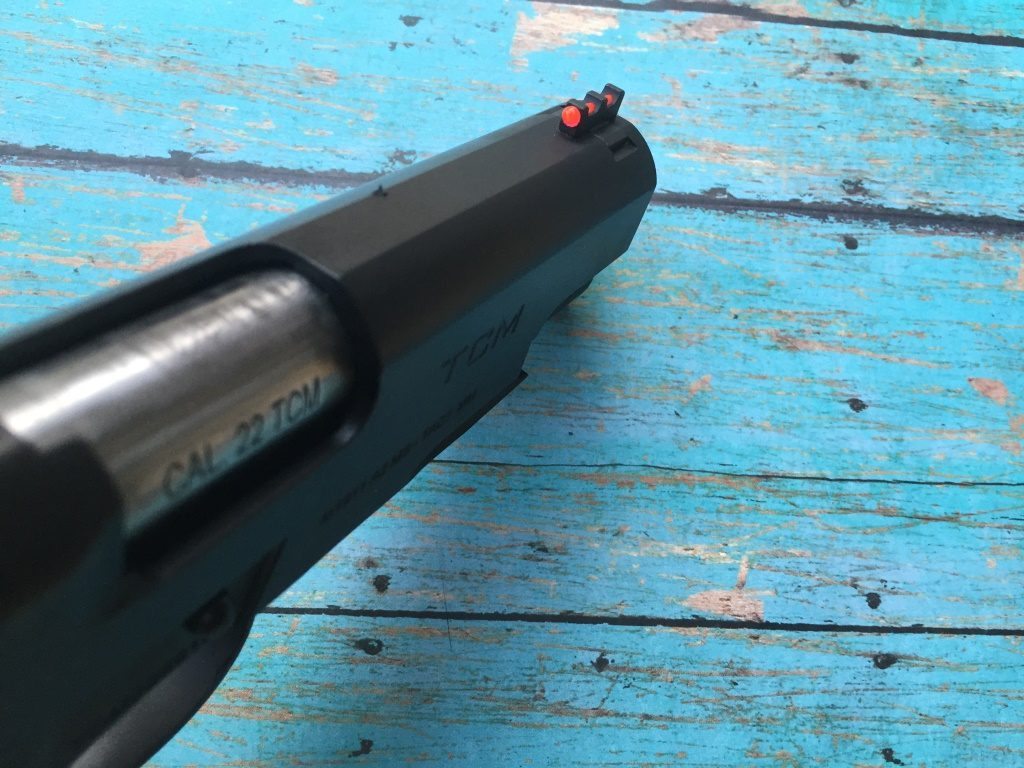 My first outing with the “TAC Ultra” was a two and a half hour session of defensive shooting drills with about 250 rounds.  It was invigorating!  Every round was accompanied by a basketball sized ball of flame and a roar that sounded like a magnum but the recoil is much less than you’d expect facilitating follow-up shots.  My fellow shooters noted dust coming off the roof’s soundproofing from the concussion.  Shooting 22 TCM will guarantee you are noticed at the range.  The one downside had been three failures to extract.  I doubt the extractor is the problem.  I have had some lots of 22 TCM exhibit this problem in another gun.  It seems the casing can over expand and wedge itself in the chamber requiring an extra manual tug on the slide to remove the empty case from the chamber.

The 22 TCM round didn’t seem to be a precision round.  Best I could achieve from a bench rest position were 2-3” groups at 10 yards.  While I got satisfactory performance for defensive accuracy out to 25 yards, 22 TCM as it is presently manufactured won’t be seeing Camp Perry marksmanship competition.  9mm performance though was superb.  One inch groups at 10-15 yards from supported positions were possible though I find fiber optic sights a bigger challenge to use for precision shooting.  The gun eats 9mm voraciously and had zero malfunctions after several hundred rounds.

One of the “TAC Ultra’s” major advantages is its comparatively huge magazine capacity of 17 rounds.  This is a relatively rare feat in the 1911 world.  As with my previous review of a Rock Island TCM high-capacity pistol it was reassuring to not have to do magazine changes or reload as often as my peers during the defensive drill session I attended. 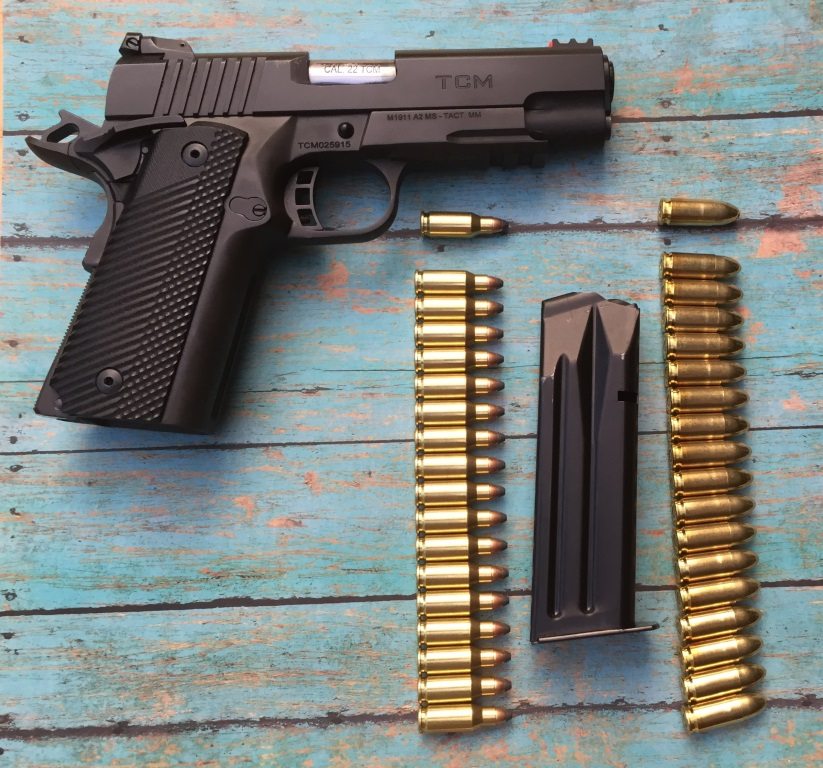 I also noticed (as previously mentioned in a review) that some of the magazine bases suffered from being dropped on a concrete floor.  There’s no doubt concrete is tough on magazines.  I noticed that two of the Mec Gar mags base plates’ forward edge were bending from striking the floor during combat mag changes.  The mags feature a larger than average area forward of the magazine column which comes in very handy if one needs to strip a magazine out of a pistol.  They will also bite you if you forcefully slam the magazine home with one’s grip being too low (my bad).  I don’t think the bending caused any malfunctions and might be alleviated with a bumper pad.  I run Mec Gar mags in other guns with no issue.  They are a solid source for magazines. 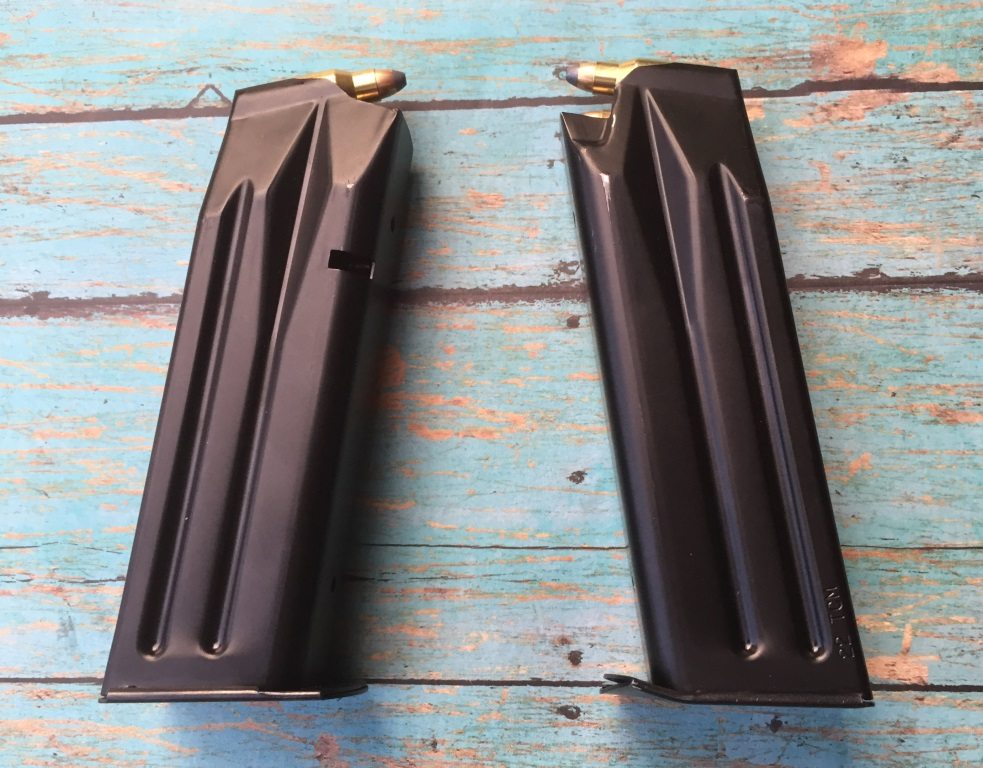 One magazine
Magazine base plate bending when dropped on concrete

Of the four Rock island guns I’m reviewing, this is my favorite and of all of them, my first pick.  It has the same dual caliber capability as all the TCM guns but has the high-capacity, commander length and picatinny rail that especially suits it for defensive carry.  The short picatinny also makes this gun compatible with the railed 1911 holsters I( already own.  Others in the TCM collection extend to the end of the muzzle making holster selection a little tougher.  The only thing I think I’d add is some serrations to the front slide of these guns to assist me in press checks.  It really needs to have a second magazine included in the box because that’s a must buy to do any real shooting with this gun.  It’s becomes a huge distractor to training when doing self-defense drills with only one magazine.  As with any self-defense gun one wants to fire several hundred rounds to a thousand before staking one’s life on it.  This remains a valid choice as a self-defense gun when using 9mm.  I’m waiting for mire data on 22 TCM before endorsing it.   That said, 22 TCM is FUN to shoot!  What’s not to like about flame and roar?  It does Rock Island’s advertising line justice, “Looks like a Gun, Performs like a Flamethrower.” 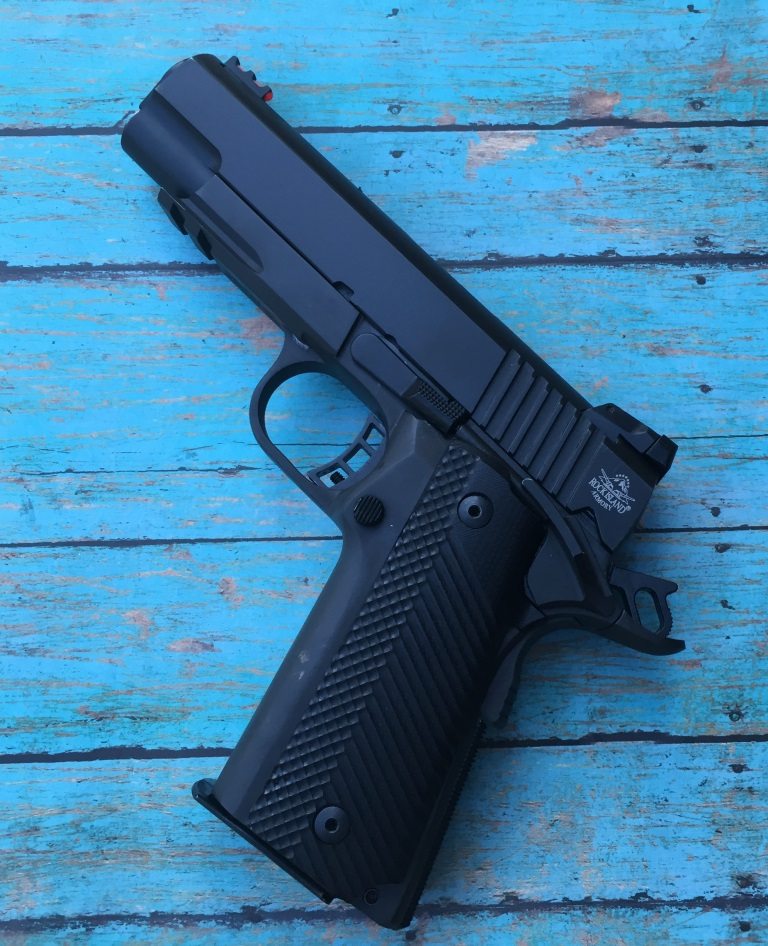