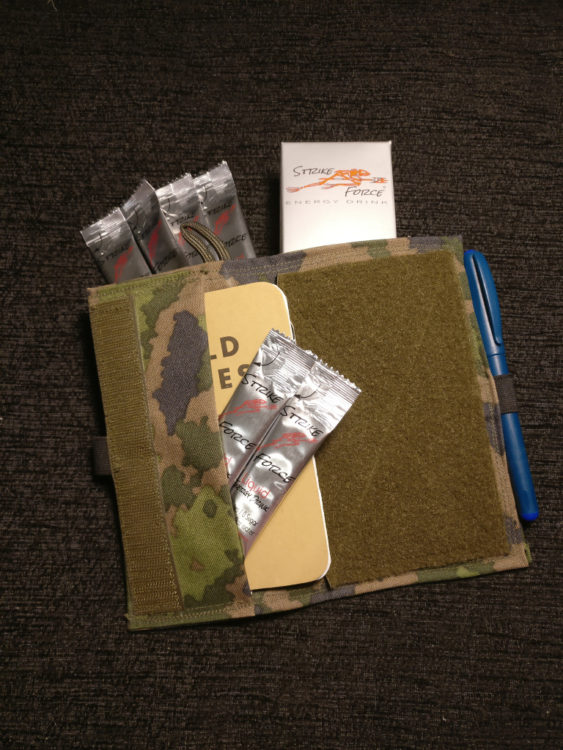 Article by Blue, with input from Noble.

Strike Force Energy has lately made their name and product onto the lips of the gear loving community that we follow and know. The American veteran owned business offers a concentrated energy drink solution(liquid), that is compact to and easy to use. We had the privilege of receiving some Strike Force from Allied Risk Equipment Consulting in the UK to test the product.

Developed from the request of a former Navy Seal. Their company website tells the story as follows:

“What do you do when a Navy SEAL asks you for a refreshing drink? If you value your life you give him what he wants. That’s what happened when a friend of ours returned from overseas and stopped by our plant. According to him, the Military runs on caffeine and water, and the water in theatre is less than great.

The team of flavor junkies at Strike Force heard him loud and clear and we honored him with the name of his choice. And Strike Force was born.” – Strike Force Energy company website 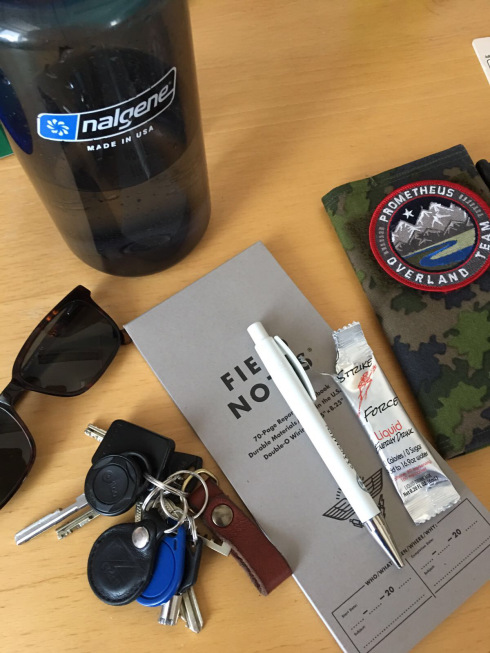 The product itself is a liquid, available in several forms for carrying with you on your person or in a vehicle, as the product was delivered for military applications. Strike Force is most commonly found in simple and small portion satchels, but is also available in pump bottles for anyone who sees such necessary. Whether you need to buy 10 or 700 satchels, they got you covered! And in some cases the product is delivered in a bad ass ammo can, what more do you need?

The use of the product is utterly simple. All you need is 0,5 liters/16,9 ounces of water, mix the concentrate into the water and kablamo, your water has turned into an energy drink! Now many might think “hey, aren’t energy drinks unhealthy and full of sugar?”.
Most of them are, but not Strike Force. Strike Force is calorie and sugar-free, thus only inserting only the flavor and the refreshing and energizing contents into the water. And the company overall is very open about their nutritional contents, and keep them available also on their web page.

As said, in the origin story, the military runs on caffeine, and Strike Force is there to provide it, as well as taurine, vitamins and more refreshing and sustaining ingredients.
The caffeine content isn’t the greatest and drinking 0,5 liters of the mixed product contains about an equal amount of caffeine(160mg) as a big cup(0,24 liters) of coffee would. At least according to my internet searches.

The price of a single Strike Force energy- satchel is around 1 USD which isn’t really too much, as one satchel turns the plain 0,5 liter bottle of plain water into a refreshing beverage. 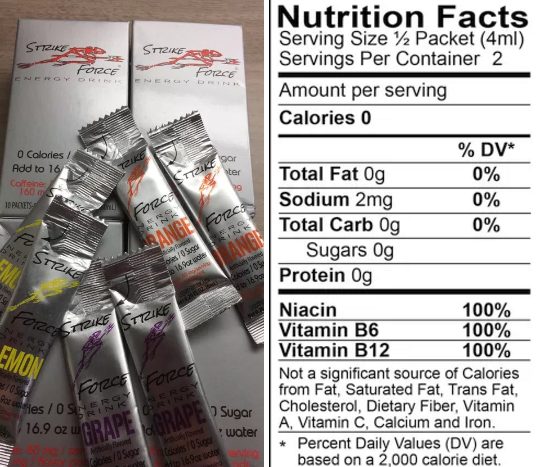 Original ‘aka’ your regular ordinary energy drink flavor. Very distinguishable if you’ve ever had a sip of red bull or any other competing brands product. Some might dislike the flavor and how it tastes, but to me personally, it is very enjoyable.

Grape – Didn’t really know what to expect from this, since grape flavor isn’t a thing here in Finland or in the whole europe even if I’m correct. To be honest my only experience with artificial grape flavor is from grape flavored Fanta.

The flavor is somewhat mediciny and surprisingly strong at first(especially for me). Luckily the taste balances out as you drink it and gets more enjoyable over time. The overall taste is very sweet and the ‘grape’ flavor slowly fades away leaving only a light taste lingering in your mouth. In the end, very drinkable, if not enjoyable even.

Lemon – Honestly, I had the most expectations for this after tasting the original energy drink flavor. But I got brutally disappointed. To both of us the lemon flavor tastes pretty much the same as it smells. And the scent of lemon is rather minimal in my opinion.

For me the smell brought back memories of my days doing janitorial work in a public building, which included cleaning toilets. And the smell of old urine combined with strong lemon scented detergents is exactly how I experienced the Strike Force lemon flavor. Not that I would know how the combination tastes, but sometimes you feel how the smell and taste of something combine spot on. The scent is difficult to handle and so is the taste. Easily the hardest drink I’ve had in ages.

Orange – Not very orange-like to be honest. The smell is very lightly citrusy and you can get a whiff of orange there if your senses are in the right place and the moon and stars are properly aligned. Taste-wise the orange isn’t anywhere near orange, but more on the lines of the lemon, but more subtle and way more enjoyable.
I personally liked this over the lemon and this is almost drinkable even, though I wouldn’t re-stock myself on this.
All-in-all the strong flavor profiles are intended to be strong, since the water available for the soldiers or anyone who may use the product, might not be the best. So masking the water taste might come in handy more than we even expect. 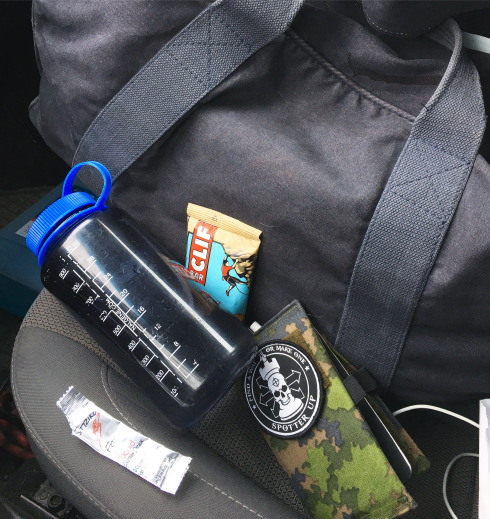 “I’ve never been a coffee drinker and only lately have I started to be able to drink coffee, not that It would be my go to beverage. But I’m not a huge energy drink guy either, but truthfully I have drunk more energy drink than coffee in my years, so hearing about Strike Force was intriguing. I have to say I doubted the product a bit before we received the product, but after using it for a few weeks I was impressed.

I like the “energy drink” flavor a lot more than coffee so being able to have a refreshing drink to keep me active and alert throughout my day was very pleasant. And what I noticed was that I didn’t get sleepy or tired in the afternoons at all, which is common after a long day of work or school. And that “crash” does happen if I’ve had coffee, so there must be some difference.
As the product is calorie and sugar-free, has vitamins and more. It truly is a good product, and having variety in the flavors is quite nice for those who don’t like the regular energy drink flavor.
It’s going to be tough not to re-stock myself on this product!” 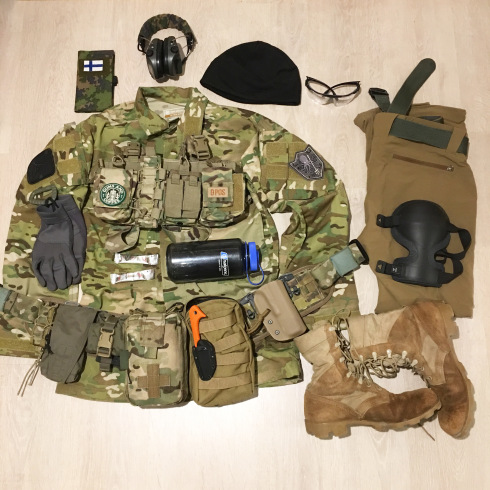 “When we got the Strike Force packet from Allied Risk I was first a little sceptic. I have never been a fan of energy drinks. I have tried them from time to time, but I never liked the taste nor the buzzy feeling. I have always been more of a coffee guy. Actually quite a lot of a coffee guy. But with Strike Force I decided to let go of my prejudice. I had read and heard a lot of good about the stuff.

At first when I popped the first satchel I was still a bit weary, the smell and the taste were somewhat similar to the other energy drinks I had tried before. But quite quickly I accustomed to the taste of it, that has a hint of vanilla in the scent, I think. And the absence of the annoying buzzy feeling was a great added bonus!

After a few satchels I was sold. I have mainly used it at the gym, with one satchel mixed to a litre of water. And I have noticed that it has a nice invigorating effect and boosts my training! On long days at work I have sipped a few cups of coffee with a portion of Strike Force and really has made a difference. And on my long road trip alone a few weeks back I stayed up really easily with the added energy of Strike Force.

I believe it is the water/ Strike Force combo that makes it so effective. The water allows the working substances of the Strike Force really open up and work with the body to keep it energized. Whereas with coffee you have a caffeine crash inbound if you do not remember to have a few extra glasses of water with each cup.”

We want to thank Richard at Allied Risk for introducing and supplying this product to us. We are quite sure we’ll have to re-stock our wares sooner than later, and we can recommend the product wholeheartedly for anyone to try. We really enjoyed using the product in our daily lives and activities where the product could show it’s capabilities and effects in the most natural way possible.

I received this product as a courtesy from the manufacturer  so I could test it and give my honest feedback. I am not bound by any written, verbal, or implied contract to give this product a good review. All opinions are my own and are based off my personal experience with the product.