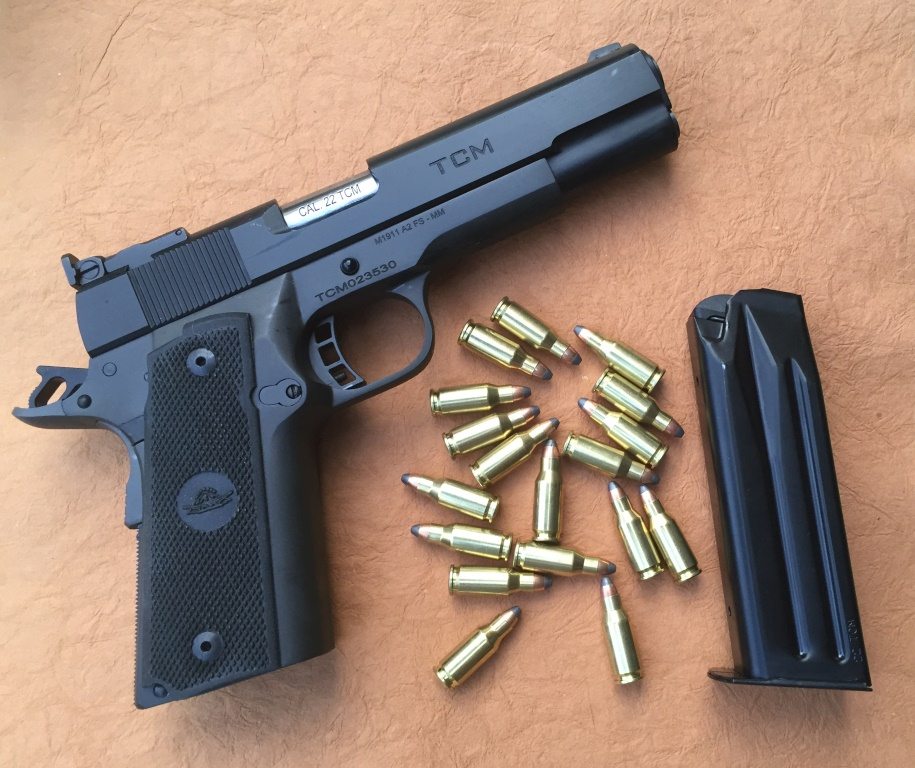 Rock Island’s TCM series of affordable yet high quality 1911’s are unique because they are all combination pistols.  They shoot the ubiquitous 9mm round but also the new and exotic 22 TCM.  22 TCM has the potential of being the first real self-defense .22 round.  My last review of Rock Island’s unique entry into the 1911 market is their target, high capacity model.

Rock Island’s Target Full Size (FS) High Capacity (HC) combo 22TCM/9mm 1911 (a mouthful I’ll shorten to “TCM HC Target”) comes packaged just like its brothers in the series.   My sample came with the gun, two fired 22 TCM casings, a 9mm barrel, recoil spring, sight adjustment tool and allen wrenches.  Finish was also the same, traditional parkerized finish with no blemishes and even application throughout.  The Rock Island Armory’s logo (forward of the hammer, left side of slide) stand out.  “TCM” is roll stamped on the forward right side of the slide.

Many of the observations I had shooting this gun were similar to the Full Size High Capacity model which is identical to this gun the biggest difference being the target style adjustable rear sight.   The TCM HC Target was the most accurate of all the TCM pistols I shot.  I reliably shot three four inch groups with 22 TCM at 10 yards free hand and smaller with 9mm. 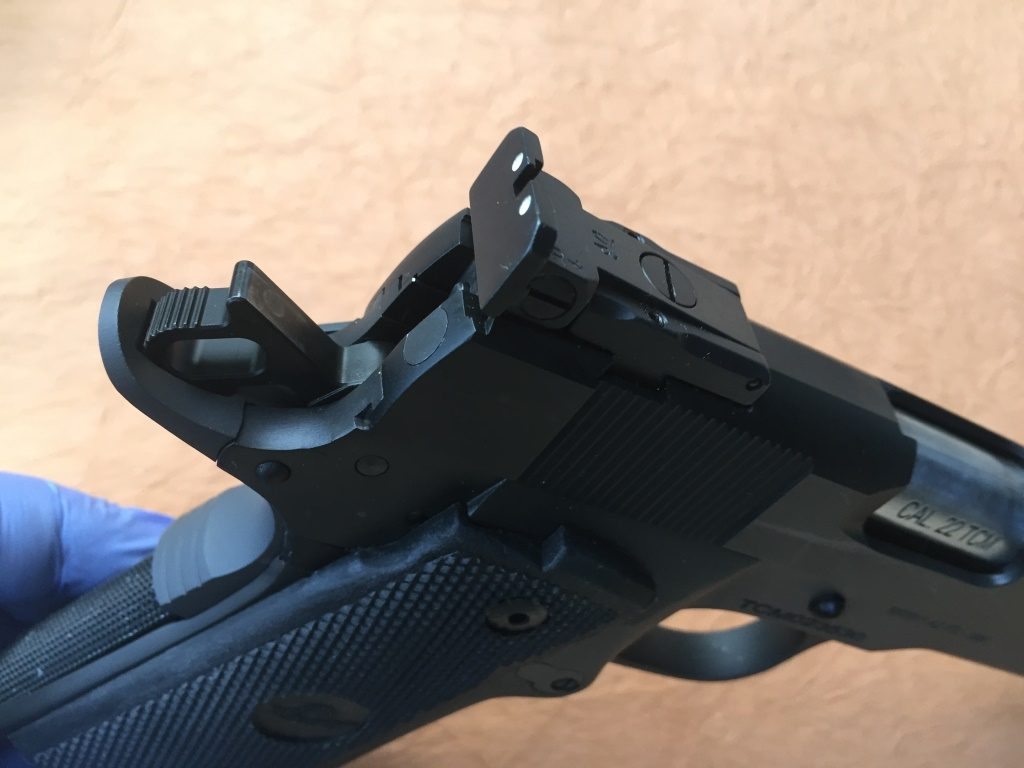 My friend, four time President’s One Hundred awardee and Master Gunsmith at AATF, Pat Sleem agrees.  I loaned him the to shoot.  He opined that the 22TCM is a hot round but not all that accurate while the 9mm is capable of putting holes in targets that touch each other in the right shooters hands as long as the barrel bushing is fitted to the 9mm barrel.

While all the TCM series guns come with two barrels they only come with one barrel bushing.  One barrel is going to be more accurate than another as the point of aim shifts between the TCM’s 9mm barrel and its bell nosed 22TCM barrel.  Pat knows what he’s talking about.  As a three time collegiate All American and Army Reserve pistol team competitor who started his gunsmithing business to build accurate completion guns he has a wealth of knowledge with the trophies to show for it.  He’s my “go to” gunsmith and believes all the TCM guns as having a high cool factor.

I ran a defensive skill drill session of about 200 22TCM rounds with the TCM HC Target.  As with the target shooting sessions I had no malfunctions and during two different head to head competitions was able to put hits in the “A” zone of an IPSC target before my competitor at 10 yards.  During the night though I did notice I wasn’t getting slide lock on an empty mag.  The problem immediately stopped when I went to a different magazine.  The problem seemed specific to one mag.  During reloads I came to absolutely love the checkered slide stop.  My tactical reloads seemed faster.  Best slide stop I’ve ever seen on a 1911.  I want one on all my guns!

Another big advantage to the TCM HC Target is its cavernous 17+1 round capacity!  Numerous times I was able to continue drills while fellow students were changing or topping off magazines.  Sadly I understand production guns only come with one magazine.  I hope that changes. Along with the huge ammo capacity changing calibers doesn’t mean you have to stock up on other magazines.  The TCM HC Target magazine reliably feeds 22TCM and 9mm.  I wish more guns did that.  It’s a unique advantage in having a 1911 chambered in 9mm.   You maintain the venerable 1911 system, leverage already acquired muscle memory (if you’ve own/shot other 1911’s) cut your cost in feeding her and can even use your old holsters. 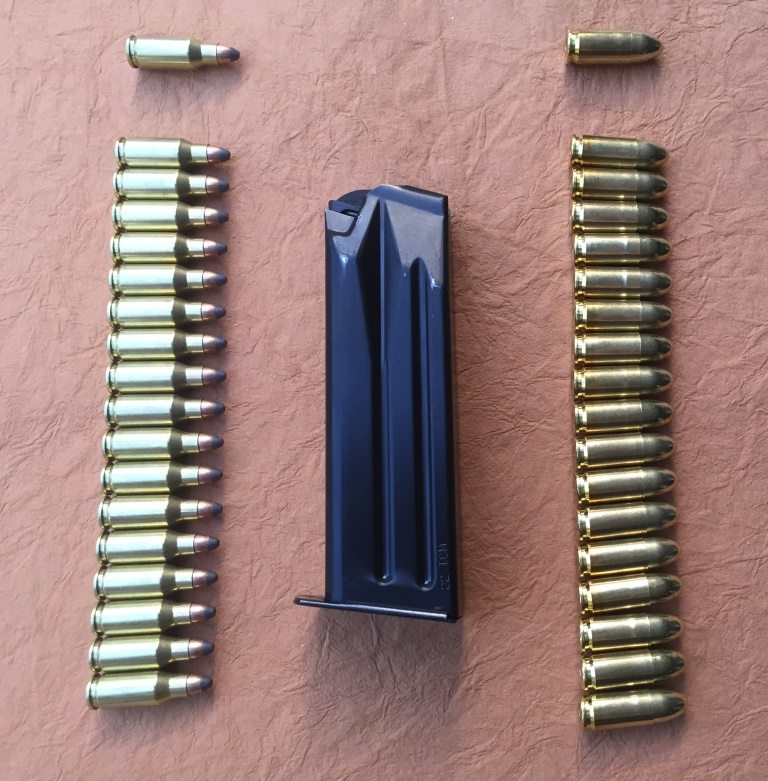 I’ve mentioned the 22TCM fireball in all of my reviews.  Maybe I’ve gotten used to it?  Some of the specific defensive drills I was doing involved low light situations using a flashlight on a darkened range.  While walking back to the ready line from the firing line my fellow shooters stopped me and asked what I was shooting because of the magnum sounding report and basketball sized flame that erupts from the TCM HC Target.  I’m four for four on getting noticed on the range.  The gun is loud and luminous but surprisingly doesn’t kick as much as one would suspect.  I let a fellow shooter who happens to be an Air Marshall shoot my gun afterwards and likened the recoil to a .22.  I think it’s a little heavier but not by much.  While the bright flash of the TCM HC Target didn’t seem to impact my night vision through engagements of 4-21 rounds it did leave an impression with my fellow shooters. 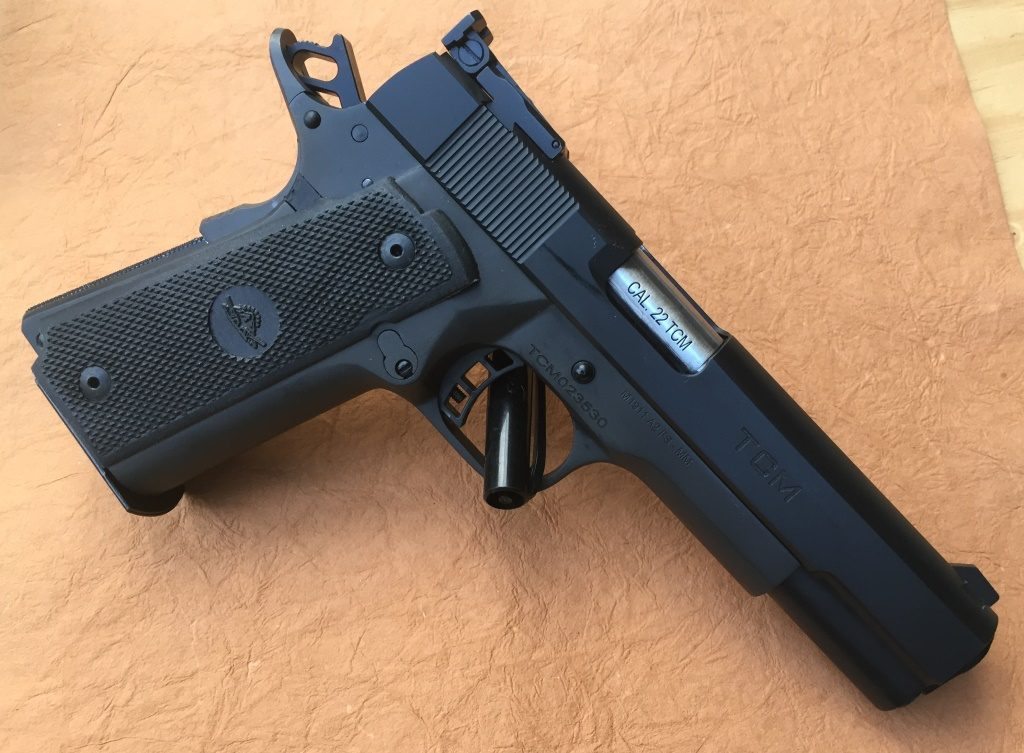 One magazine
Magazine base plate bending when dropped on concrete 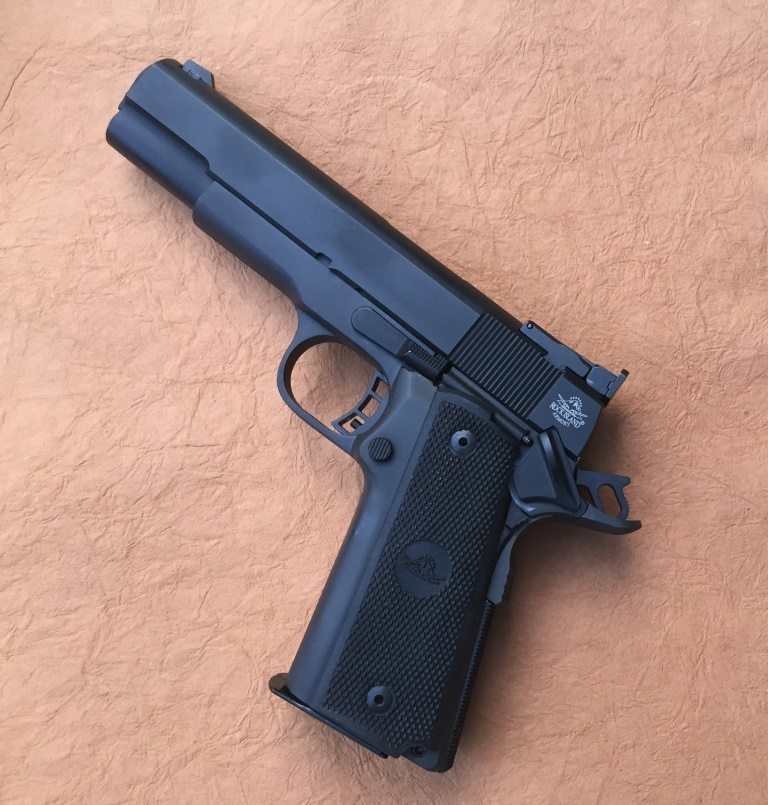 Left side of Rock Island’s TCM HC Target.  Photo by Will Rodriguez

It’s been a real pleasure to put a couple thousand rounds through four of Rock Island’s TCM series pistols.  The TCM HC Target was the most accurate of the four I fired.  Recoil is minimal with the 22TCM and the all steel chassis of the 1911 does a great job of dampening the recoil of 9mm.  Ammo capacity of the double stacks is phenomenal and being able to shoot two calibers out of one gun is always going to improve a gun’s utility.  All in all a great gun to have and especially attractive for those looking for a 1911 chambered in 9mm. 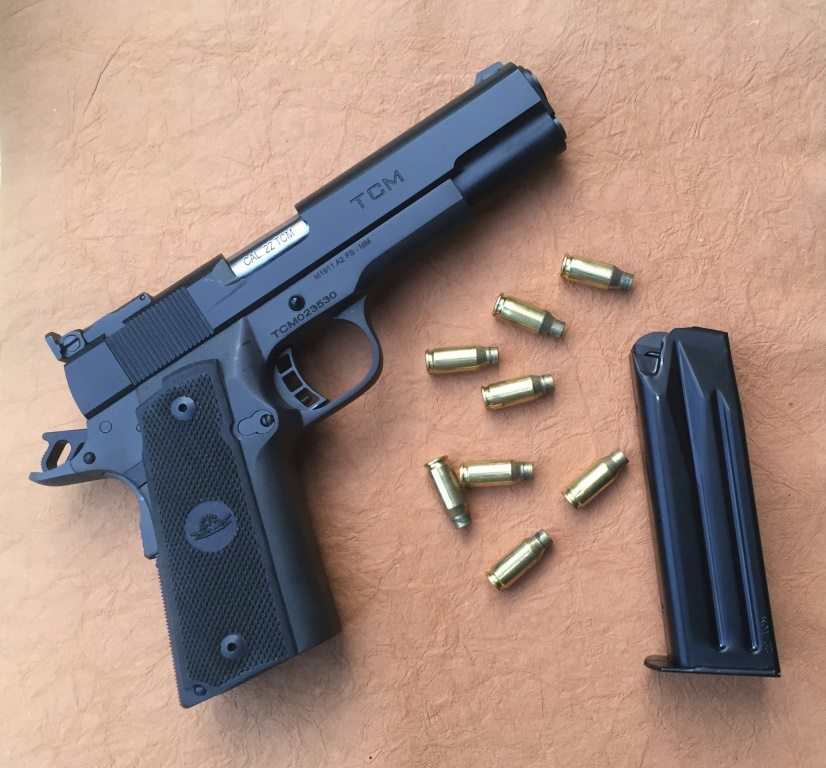