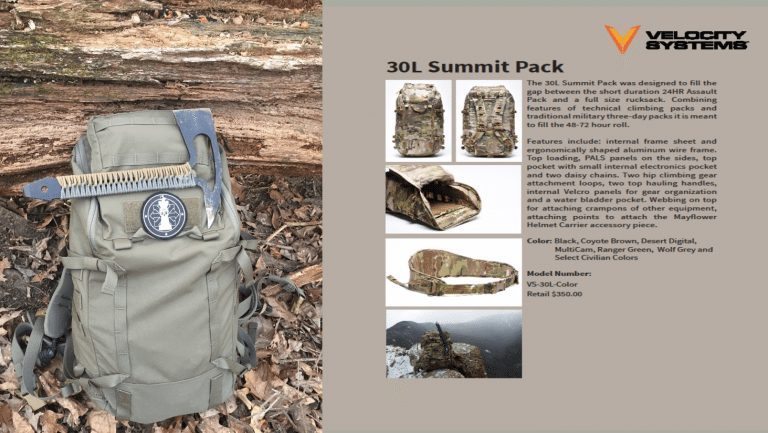 I have been following Mayflower Research and Consulting for quite some time, and was very excited when they and Velocity Systems agreed to send us at Spotter Up a couple of cool products to review for our audience.

Mayflower RC was started by Travis Rolph.  Someone you probably should get to know over a beer, and one of those guys you want watching your 6 when you’re out there doing the righteous thing that so many of us doorkickers have done.  Travis’ designs embody something I try to look for in training, and would describe as “outside the box” thinking.  It is also based on many years of operational experience and firsthand feedback.  As someone who “is not only a spokesperson, but also a client” and end user, Travis teamed up with the founders of Velocity Systems to produce his products, and meet the growing demand.

It turned out to be a great partnership, as both companies embrace focused quality production, dedicated customer base and US made products.  Mayflower describes their products as “light weight, high performance tactical nylon for the military athlete.”  One look at the Summit 30L pack, and you realize this isn’t just a sexy gimmick.

My initial impression of the Summit pack is that it’s a light-fighter version of something much larger.  It reminded me of larger designed rucks which are very much loved and used by grunts and bearded professionals everywhere, but which so many of us often wished would come in a smaller, sleeker version.  Pound for pound the Summit works like an ant.  It is light, instinctive to use with no unnecessary MOLLE, snaps, lose webbing, or a myriad of accessory pockets which are not necessary in the field. 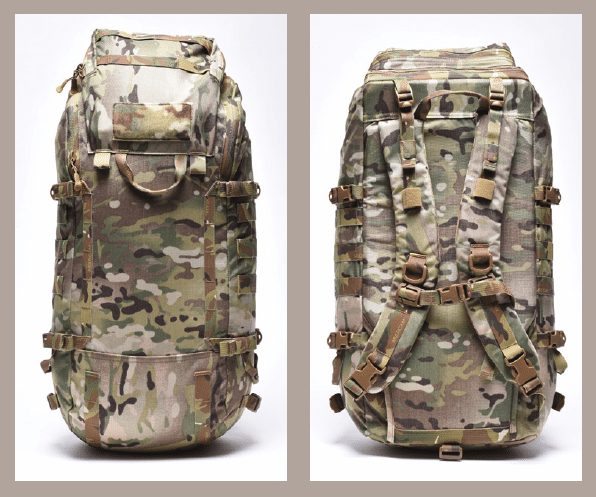 I read in several places on the Mayflower and Velocity websites that “technology moves at the speed of need.”  Looking over the Summit it is evident that the need addressed by the pack is a functional gap filled in the pack and ruck market.

Too many companies produce a solid pack, push it out to the end user, and expect complete satisfaction because of their brand name and history.  The reality dictates that this alone is not enough, and if a product is to remain competitive, the manufacturer needs to either build in an organic flexibility into the production or be able to adjust based on user feedback.

The Summit does the latter as smooth as the blend of 500 denier nylon from which it’s made. Many details make this pack a flexible addition to a load out kit for anyone looking to fill the gap between an substantially sized 3-5 day or full size ruck and an assault pack.  As stated by the company’s description: “the pack was designed to fill the need between a short duration 24hr Assault Pack and a full size rucksack.”  Some people may insist on heavy duty nylon everywhere, but I would disagree.  In the field and over time every pound counts.  Every water bottle, magazine and spare piece of clothing adds weight and effects the mission.

As Travis eloquently notes on his website, “low friction or limited” use items or areas of a product don’t need the extra weight and reinforcement, while something constantly getting beat does.  Some users may also wander why use liter instead of cubic inches, as the US market often does.  I personally enjoy the idea, and hope that the industry adopts liters as an overall indicator of container sizing.  It’s a lot easier comparing products listing overall liter amounts like 30 or 35, versus measuring from every angle and corner that something may be 2345.6 cu’s.  Continued handling of the Summit shows that it is a high end, capable and adoptable pack. 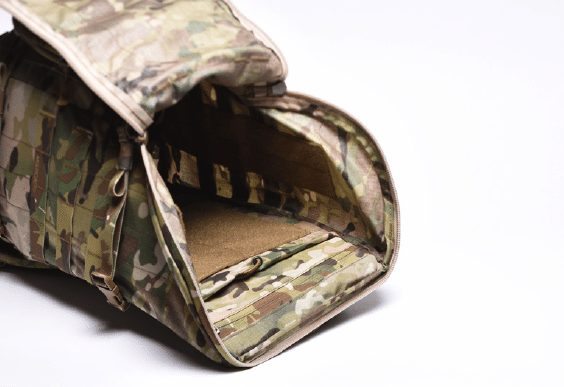 The outside face of the pack is smooth, which eliminates unnecessary weight, snagging in close quarters, and just makes it look good.  A number of webbing loops allow the end user to customize the front with a bungee, able to secure things like clothing, climbing rope, even some lightweight tools.

The sides are covered with enough MOLLE to attach additional ammo or medical pouches, something which may need to be readily accessible for an assaulter.  A basic utility pouch adds significant versatility.  The bottom and underside of the pack allow for the same customization based on mission needs, and allow to attach something like a lightweight tent or shelter, should the mission or a family camping trip run long.  The top of the pack is a good size pocket with MOLLE on the outside, and ability to place inside an unopened MRE, coffee cup or NVG’s and some additional accessories.  A smaller zippered pocket inside will hold fine items like batteries or a couple pens.

I really like the fact that the top portion of the pack is angled.  It allows the operator to turn around and have an unobstructed vision, and also prohibits interference with helmets, cords and antennas.  It also helps to make the pack really functional in a CQB environment.  In fact, as a medic, this pack would be something I would carry constantly and everywhere, instead of finding every opportunity to remove it and get relief, of some med packs dictate.

The large main compartment opens with two zippers, and flips completely over toward the front of the pack.  I was a little concerned initially about grabbing the smaller zipper-pulls with gloves and under stress, but they are plenty good.  Just for kicks I did add simple 550 cord pulls, which anyone can do with any pack if necessary.  Those are the simple custom things some of us like in just about everything we use.

The access to anything inside is unrestricted, and you can tell what you’re grabbing in a hurry. I love the fact that it doesn’t just unzip, but completely opens, and specifically opens toward the front of the pack.  It helps the stuff inside stay secure yet accessible when the pack is opened.  It helps your buddy open the pack for you while the pack is on your back, instead of holding the lid against your head with one hand, and getting the stuff with the other.

The inside back panel of the pack is completely covered with soft Velcro, and the sides are covered partially as well.  Again, this allows for modularity and customization based on operator needs.  You can keep the compartment smooth as is, add any number of manufactured products which will Velcro directly to the pack to allow storage and compartmentalization, or add something which will turn the back Velcro panel into a MOLLE panel.

Again, as a medic, I attached several velcro loops, which allowed me to store smaller loose items like airways and King LT.  My only wish for the main inside compartment would be the ability to have a couple cinch ties or loops to add them, in order to secure or separate larger items, or compress something.  Behind the inside back Velcro panel is an open nylon pocket which accommodates a 3L hydration system.  Behind that is a zippered pocket containing something that makes the Summit a magical stand-alone in an assault pack or a medium pack category.

What makes this pack a stallion is a hybrid internal frame.  There are 2 metal stays and a plastic skeleton.  More evidence of weight saving purpose here.  The frame is vented, instead of being one solid sheet or two flat aluminum pieces, this is like a vented rotor on a brakes of a race car.  I haven’t used this pack in hot desert sun, but would guess that the cool air from an iced hydration bladder would feel really nice against your back, and also allow your sweat to evaporate easier.  Save wearing a vest in-between anyway.

Carrying 30 pounds or 60 pounds with this pack, and mostly thanks to this frame feels equally effortless.  I ran with a fully loaded pack, which came in around 30-35 pounds, at full sprint.

Not only did the entire load stay put, so did the pack on my back.  There was no flopping, no bouncing, and no noise.  I think given everything the Summit offers, this is my favorite feature.  You don’t have to climb or run up or down hills to enjoy this sweet feature.  With any significant load you will get an appreciation for it, and realize that your other pack probably doesn’t work quite as well.  Nothing dangling, bouncing around, or making noise. 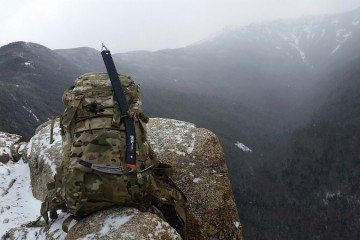 The waist belt displays this quality just as well.  It is not overbuilt with padding, and doesn’t have a boat load of webbing to surround a small hippo.  It functions flawlessly to support the weight of a loaded pack, remove some strain from your shoulders, and can accommodate a medium husky silkies wearer like yours truly, to your bigger variety bad ass like Pat McNamara.

Another very smooth and appreciated feature of the waist belt is the ability to adjust it on the move without manipulating too many buckles or having the loose ends dangling at your sides.  The loose ends are tucked parallel to the main belt and under a couple of loops.  Adjustment is made by pulling on the working/loose portion, and sometimes holding the other side with one hand.  Either way, it’s seamless.  It’s also removable, should you decide you don’t need the belt, or always use a battle belt which may leave little other room.

The Mayflower 30L Summit pack is a smooth and capable ruck, adoptable to a multitude of missions and users.  It functions smoother than a cup of grunt coffee after a night of drinking, looks good and made in USA by a disabled veteran small business.  If you’re in the market for one or having a wish list, I highly suggest that this pack makes it on there.  Mayflower RS and Velocity Systems also sent us a plate carrier, some parts of which you can see in the featured Summit video.  Stay tuned for that review.