I remember first shooting off a tripod in the way they are used now around 2013 after our team was shown a tripod and Hog Saddle demo at the Oregon Sniper Challenge. On arrival home the whole team trawled our local classifieds for suitable Manfrotto’s, which at the time were really the only suitable tripod brand available for the task. Prior to this we had used sticks bound with thick rubber bands and various cradles and contraptions derived for the hunting market. Nowadays tripods specifically designed for shooting from have become as common as the million bipods on the market. Primarily this is a result of the breakneck speed of equipment development in the world of precision rifle shooting. Admittedly, I was one of the slower ones to let go of my Manfrotto, a carbon fiber 055 with the center column cut down and a patina of rattle can Krylon. If something works for me I tend to be slower to change it, I spent a lot of my younger years changing kit purely for the sake of changing it, a behavior that I found destroys consistency. However you could also argue on the other side of the coin change can be progress. 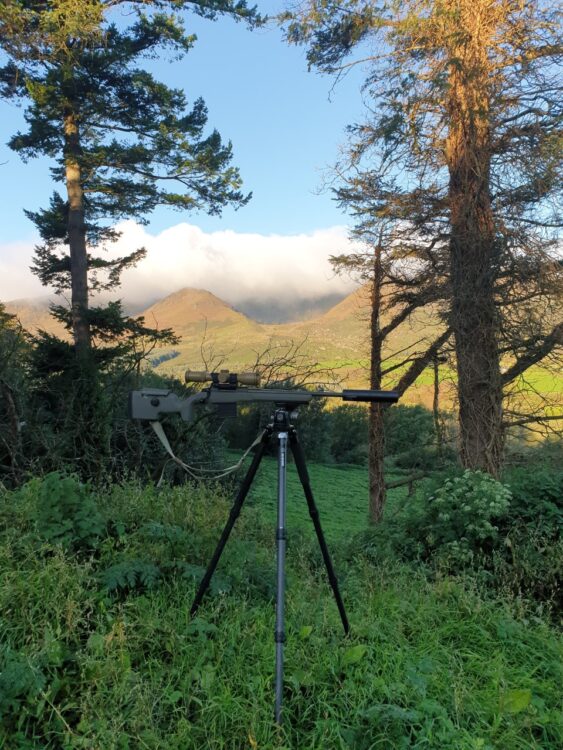 I first shot off a tripod and ball head that was designed specifically for shooting at a class in 2016 and quickly realized while the traditional style camera tripod was better than sticks bound with a rubber band; it was nowhere near as stable as the newer gun specific solutions being offered. I had gotten extremely good at having minimal movement with my camera tripod utilizing my sling etc. While such methods are tried and true they; unfortunately, were not deployable with any kind of speed. As I have previously said the evolution of precision rifle at that stage meant stability without speed wasn’t cutting it anymore, and why would it be, fifty seconds playing around with your gear short changes your trigger pulling time.

The search for speed saw Arca rails become the norm and here we are now… I could rant for a while as to how precision rifle has turned into barricade F Class but you have probably heard it already. On a positive note what has happened is the discipline has turned full circle and with the emergence of ‘hunter’ type matches, the race from how to make things as heavy as possible has been parked with its carrying cart and 26” MTU barrel. It appears we have returned to the race to make things light again, or at least a compromise between the two worlds.

Historically, light and strong are two things that haven’t gone hand in hand so much when it comes to this game. Thankfully with the advent of the availability of carbon fiber at prices that you don’t have to be a formula one team to afford we now have a huge selection of lightweight tripods to choose from. I have tried just about them all at this point and to be frank the No Name Tripod from Two Vets Sporting Goods just ticks all of the boxes for me. I have had this tripod and ball head for a couple of months now. My intention was to not do a review after a couple of weeks as I felt I really wanted to put this thing through a bit of a tough time so instead of simulating its future uses within a week I took it pretty much everywhere I was going, including letting some of the other guys in our group take it for a couple of days to see what they thought of it also. 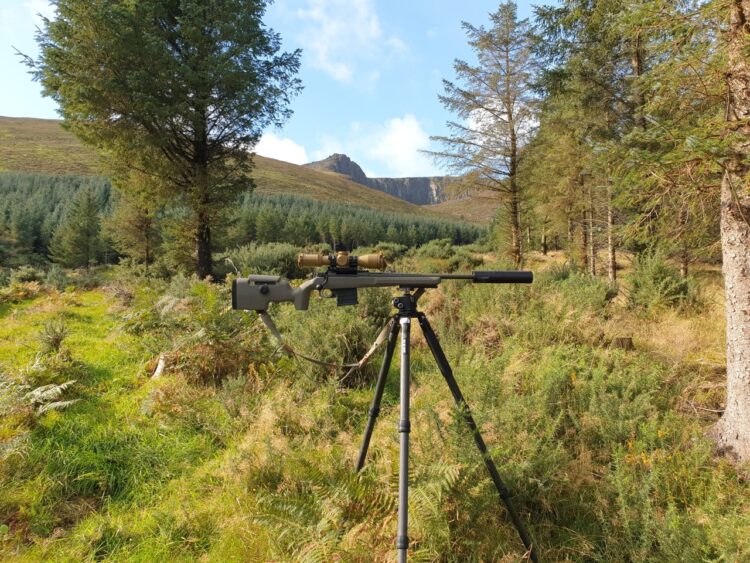 The No Name is one of seven in Two Vets range of tripods and is the initial model tripod they launched back in 2018. The total weight of the unit is 4.6 lbs. with four carbon fiber leg sections. The lower three sections are divided by half turn twist locks. I will add here I was super impressed by these twist locks, within a very short space of time I could adjust them without having to think about it, they open and close much smoother than some tripods I have used that are double the price, so credit where it is due. The rubber grip on the twist locks is solid but not too much your hand will slip off them when wet. The main leg adjustment tabs at the top are non- ratcheting ears, very easy to use and can be pushed open from inside with your thumb as well as pulled from the outside and can be set in three positions. The No Name fully deployed is 58.5 inches high and will obviously be slightly higher with a ball head attached. Once I found the heights I was comfortable with for the various standard shooting positions I marked the tripod legs with a sharpie for speed of deployment. For the stability and the deployed height the No Name offers I found the collapsed size of 21.5 inches and 36mm main tube diameter is tolerable and it nestled onto the size of my Eberlestock pack without being a burden. There are smaller and larger models in the Two Vets range but the No Name was a happy medium for the several uses I have for it. One of the things I liked about the 36mm main tube diameter is you can hold the tripod in one hand and manipulate it easily, it just fits in your hand with minimal effort.

I ran several rifles on this tripod over time, a trainer Tikka T1x, a midweight hunting/hunter match rig and a heavy Accuracy International AX MC running both .308 and .338. The weight rating on this tripod is 55lbs and running the 20 plus pounds .338 on it was nothing short of effortless. From standing, sitting and high prone the No Name was incredibly stable. Two Vets provide a set of easily interchangeable spiked feet with this model of tripod and I used them while on a recent hunting trip where I knew the ground would be considerably boggy.

I also had the pleasure of running the Two Vets own brand 55mm ball head with quick release attached to this tripod setup. I am guilty of occasionally being the skeptic, I expected some considerable play with a brute like the AX clamped into it, this was not the case and the adjustment of the ball head locked up very solidly. The lighter rifles I ran on this ball head were expectedly a breeze due to the max load rating of this ball head of 65lbs. Two features with this ball head jumped out the most for me. One was the speed in which the rifle could be locked into the arca clamp, just enough pressure to close the lever without having to turn your hand into a pipe grips to close it. Secondly the panning speed when rotating the whole unit with the ball locked up. Some other ball heads I used in the past which were camera orientated would spin very freely on the 360 degree turning axis but the Two Vets version felt just right when panning from target to target. There are 3 adjustment knobs in total, all of them knurled for easy grip. The large main lock knob independently and smoothly controls the tension on the ball. On the opposite side the upper knob controls the level of friction retained in the ball head and the amount is indicated via a small window displaying numbers from 1 to 5, setting 1 being the loosest and 5 the tightest. The lower adjustment knob enables the pan adjustment on the entire base which is marked every 5 degrees. The ballhead also features two drop notches which could be utilized for steep upward or downward angles. 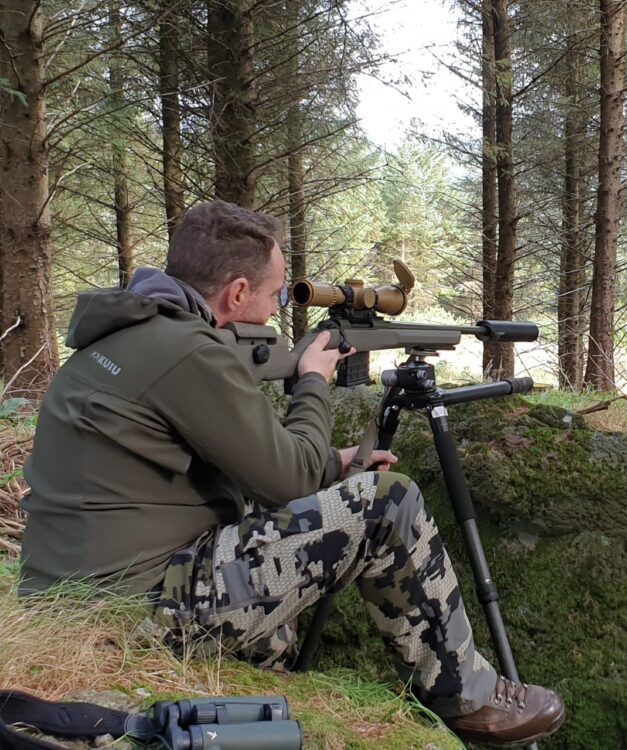 The 55mm ball head is one of three very aesthetically pleasing own brand units that Two Vets offer. Again this suited the most for my requirements. It is super easy to separate it from the tripod by flipping down a lever and pushing the red release button. With the ball head removed I ran my Warhorse Development ‘Clede’ bag on top of the tripod to great effect across several rifle platforms.

In conclusion I have really fallen in love with this setup and it has certainly peaked the curiosity of other shooters and hunters whom have seen me running it. The finish and quality is first class and I think the value for money really is there. Two Vets cover all the bases across the range and offer several solutions regardless of your shooting ‘needs’ without breaking the bank.  In future I will probably invest in several other models and in the short term the No Name Junior looks an interesting option for longer excursions. I haven’t had to deal with customer service as I have had no issues with the product but I have been in contact with the guys to assist me in selecting the right products and they were super helpful every time. Go check them out, you won’t regret it.

Two Vets can be found at www.twovetssportinggoods.com or on the gram.