There I was, minding my own business on FB (yeah right) and I kept coming across Pitbull Tactical’s Mag Carrier ad.  I ignored it until I saw the same mag carrier at a local range that doesn’t carry crap.  I reached out.  Jeff the Co-owner was nice enough to share a couple with me and I’ve been very pleasantly surprised.  These are great mag carriers for EDC and the average range session.

Pitbull Tactical grew out of the co-owners Jeff and Rich’s friendship and mutual interest in shooting.  A company that started out selling accessories and ammo, branched into kydex holsters and migrated into a universal mag carrier that is getting very popular.

Pitbull Tactical’s mag carriers consist of a two part hard plastic clamshell with a one-piece elastic band that applies pressure evenly across the top and bottom of the mag carrier.  The mouth one and 3/5 inches wide, 2.75 inches deep.  This allows the mag carrier to be used with a wide variety of magazines to include single and double stack magazines.  This is the magazines greatest strength and it’s made in the US! 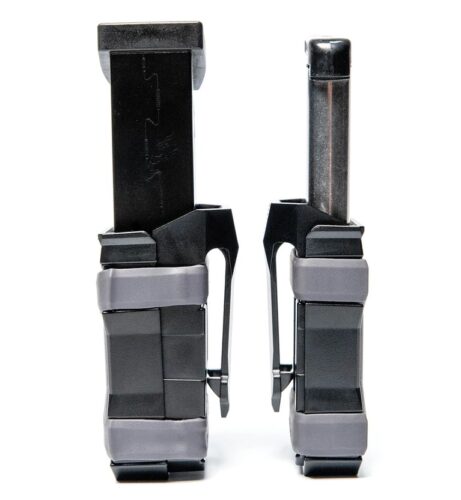 The mag carrier is attached to one’s gear with a 4/5 inch wide clip that will secure to belts up to 1.5 inch wide belts. This is a mag carrier designed to go on a typical EDC friendly gun belt and can be worn inside or outside the waistband. I found the clip difficult to attach to molle gear but it’s not designed for that.  You can do it, but there’s going to be some movement and the carriers won’t fit snug against each other. Again, not designed for rigging on tactical equipment. 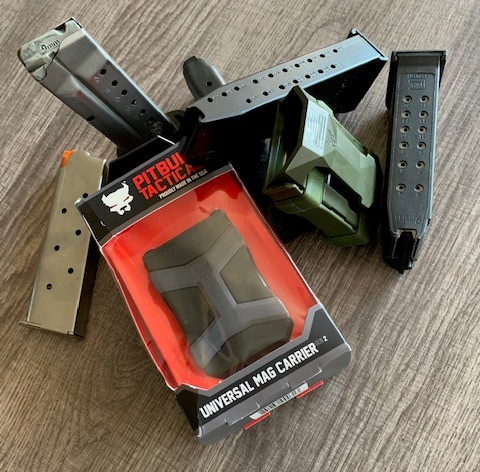 My biggest two concerns about this mag carrier where breaking and coming off my belt. They were unfounded.  The plastic is tough not brittle and the hook on the inside of the bottom of the clip didn’t slip off my gun belts.  I’ve learned the hard way not to buy gun belts with tapered edges like one sees on dress belts.

The biggest strength of this mag carrier is it works with every mag I tried to stick in there.  Well .22LR mags rattled a little bit or I had to twist to get them out but they weren’t made for .22LR. 9mm to 45 cal single stack, double stack, metal, and composite mags all went in, were snugly held and came out smooth.  For this reason alone, I think every shooter should have at least one in the range bag if not just select it for everyday carry if one uses an outside the waistband mag carrier.

Their initial model had some issues with FN509 mags that required the user to do a little dremeling but they’ve fixed that p[problem with version 2.  Mags insertion and retrieval is slick. I used these in a recent Rangemaster Advanced Pistol Instructor course and they ran like a dream. 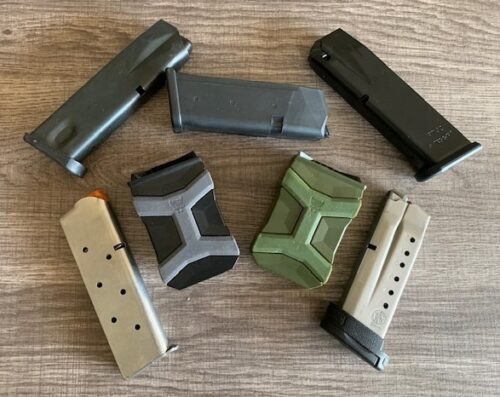 For an instructor or shooter that occasionally takes less than prepared shooters to the range, the Pitbull Tactical’s mag carrier is a great loaner because it’s so versatile.  My wife and I carry one in our range bags to loan to the student or use ourselves.  They are handy to have if we want to practice drawing mags from somewhere else besides our pocket carrier or need to carry more than one spare mag for some drill.

Pitbull Tactical’s mag carriers come in an olive, tan and black.  Their clean futuristic faceted exterior adds some style and avoids the clunky boxy shape of other mag carriers.  I also really like the subtle US flag laser etched above the clip.  When I spoke with Jeff at Pitbull Tactical they are considering a rifle mag carrier.  I hope they look at tourniquet and/or flashlight carriers. 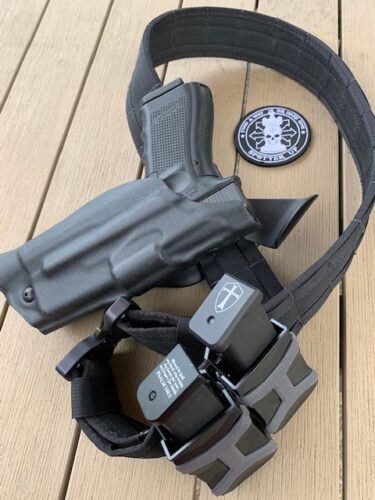