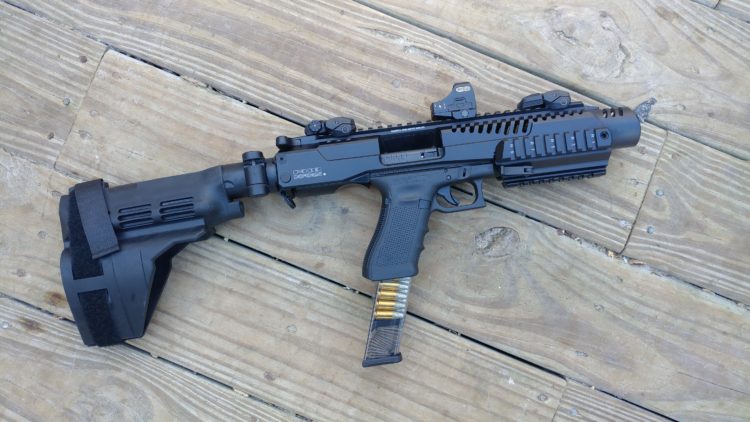 The idea of a truck gun is nothing new. It’s a gun you keep in the car or truck for situations beyond your handgun’s capability. Trunk guns should offer a substantial advantage over a handgun. The idea sounds simple enough, and it’s a concept recognized by most in the gun world. That said, keeping a gun in the vehicle presents some unique challenges 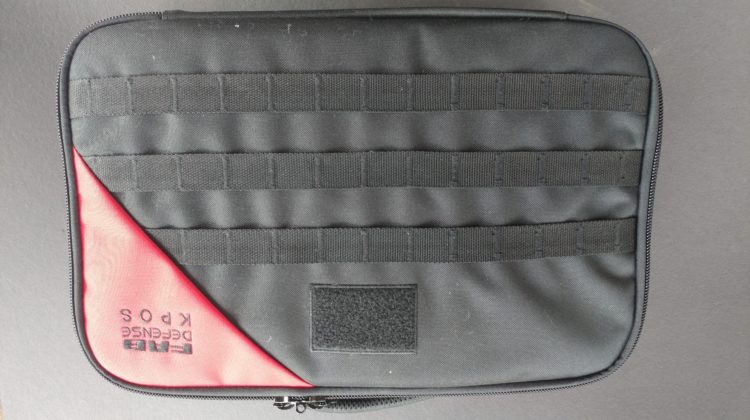 A case in the trunk to “up gun”

The biggest issue with a truck gun is theft. Gun thefts from vehicles are actually a common occurence. People may break into your car for the change in your cup holder and walk away with a shiny new gun. A stolen gun means an armed criminal.

You can remove your gun when you get home every night, but how long is it sitting alone in your car while you’re at work, or grocery shopping, or seeing a movie? It doesn’t take long to smash and grab a gun from a glove box, a center console, or from under a seat. Don’t believe that this is an issue? Check out these posts from the Gun Subreddit R/guns. Credit to Redditor Captain Ciph3r for making a list of these.

Stolen from a Car

Stolen From a Car Again

Another stolen gun from a car

So what do you do? You bend what the words trunk gun actually mean. 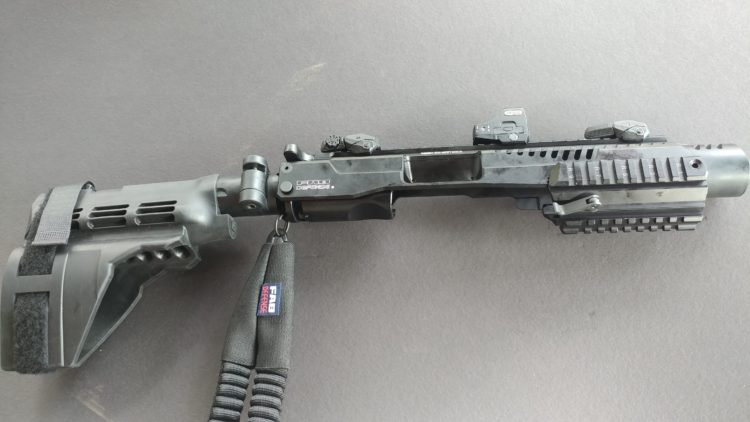 Just ditch the idea of leaving a gun in your car altogether. There is an option that does this and offers the benefits of a truck gun without the risk of having a gun stolen.

The KPOS Pathfinder is a non-NFA, non-firearm, piece of kit that can be kept in the car without nearly as much risk attached. The KPOS Pathfinder is best described as a shell that wraps around your handgun. Find the model of KPOS Pathfinder that works for a handgun you are willing to carry. Pair the two together and keep the KPOS Pathfinder in your vehicle and conceal carry the applicable handgun. Without a gun installed in the kit, it’s just a metal shell. If it’s stolen you’re out some cash, but you haven’t armed a criminal.

They don’t make one for every gun, but the lineup is impressive and includes most major companies. If you like mouse guns you are out of luck. If you are like Keith and I this isn’t an issue and you prefer a full-sized handgun for daily carry anyway. 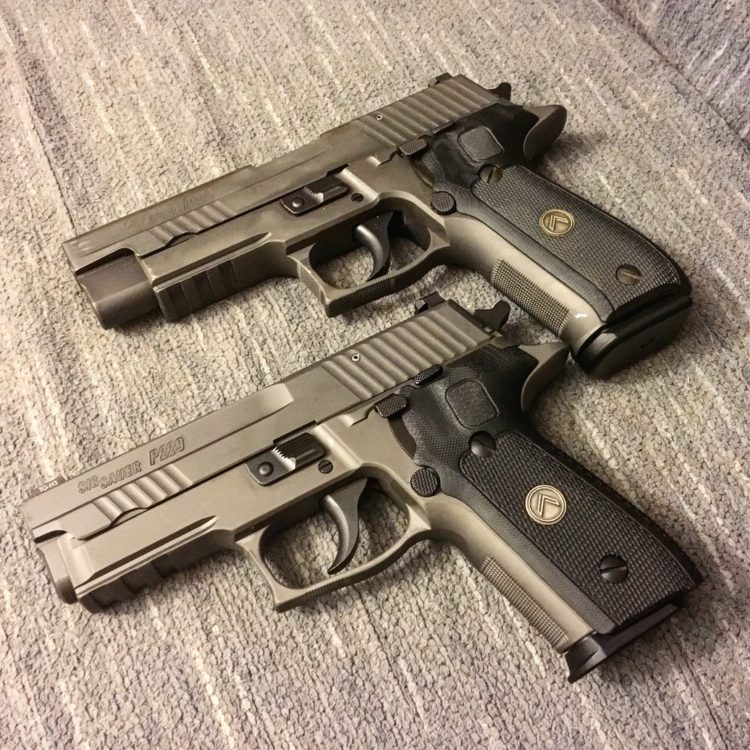 My model was provided by ZFI Inc and is for the Glock series of handguns. In addition to the Pathfinder, ZFI’s kit also includes a set of sights, a single point sling, and a nice carry bag. I’m using the Glock 17, but all medium frame compact and full-sized Glocks will fit this kit. The make or break it factor would be how fast I could install the gun into the KPOS.

With just a bit of practice it’s surprisingly fast and intuitive. You’ll need at least a few seconds to install it. It’s also impossible to install it in an unsafe way. This system secures the Glock and there is no play once installed. The KPOS locks onto the Glock’s rail and uses a back plate equipped with a spring-loaded plunger to keep the rear end in place. 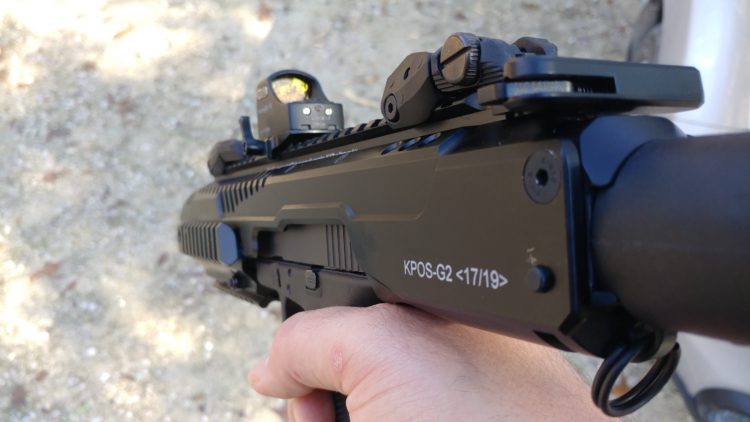 The Pathfinder model has what’s essentially an AR-style buffer tube. This makes it easy to install a pistol brace. The pistol buffer tube can still fold with the brace equipped, but the gun cannot be fired with the brace in the folded position. A pistol brace can legally be shouldered, be attached to the arm, or be used as a cheek rest. 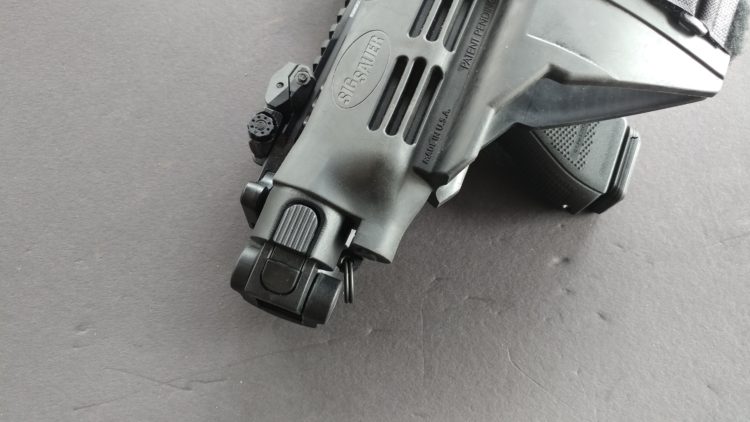 The benefits of this kit over a standard handgun are substantial. The KPOS G2 Pathfinder offers shooters the following:

The ability to mount an optic 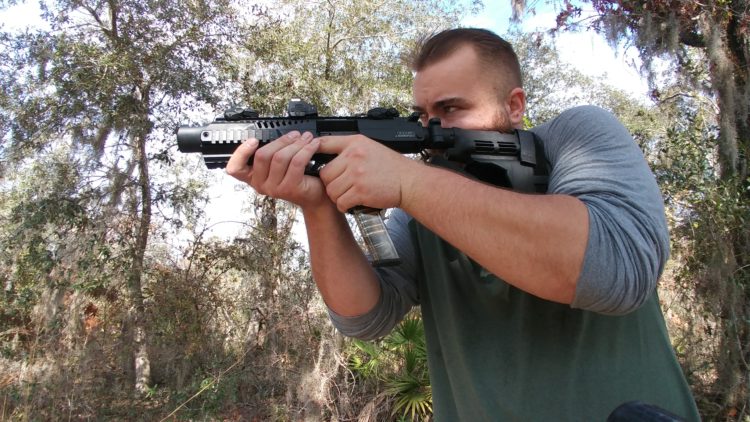 The assembly gives me a stable platform for making shots on small targets out to 50 yards. The design increases the overall control of the weapon and adds a bit of weight to it. While a 9mm Glock doesn’t have excessive recoil or muzzle rise the KPOS Pathfinder reduces both. This isn’t a big deal for close range shooting, but at the 50-yard line, it makes a world of difference.

Combine an optic, three points of contact, and very little recoil and muzzle rise, and you get a gun that can hit targets consistently at 50 yards. I’m not talking about hitting giant B 27 man-sized silhouettes. I can make my 21-inch-tall steel popper ring and sing over and over at 50 yards. The Pathfinder turns a handgun into an effective PDW. 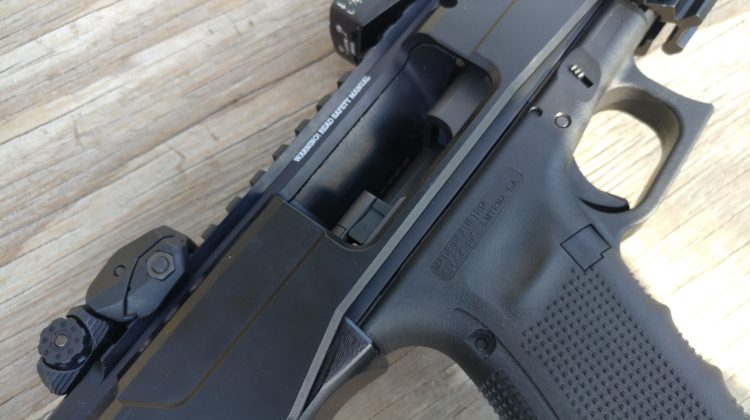 Reliability has yet to be an issue. The KPOS and Glock work well together. There are no issues with cycling or ejection. I never ran into issues with the brass cases getting caught between the gun and the shell.  The gun has no issues cycling inside the shell and clearance isn’t a problem. 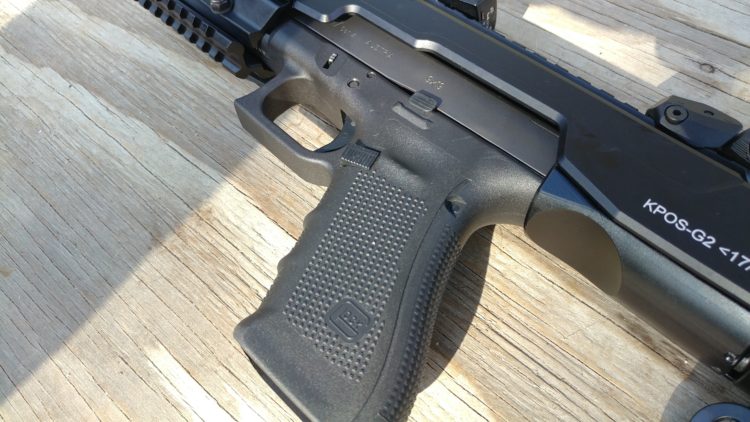 The KPOS Pathfinder kit doesn’t change the title status of the firearm. With my Glock installed it’s still just a handgun. As a result, this may affect the way you can carry the kit assembled with a gun in your state.  Since I live in Florida I could legally carry the entire Pathfinder assembled and concealed if I chose to.

The kit costs about the same as a lower end dedicated PCC. Admittedly when combined with a Glock the overall price isn’t insignificant. You get what you pay for though, and comparing the cost to a dedicated truck carbine? YMMV.

The KPOS frame is one solid piece of aluminum. I can see the cost turning some to other considerations but I can equally see why the KPOS isn’t cheap. The one advantage this kit doesn’t offer over a handgun is a more powerful cartridge. If you feel the need for a rifle or shotgun caliber truck gun the KPOS isn’t for you. 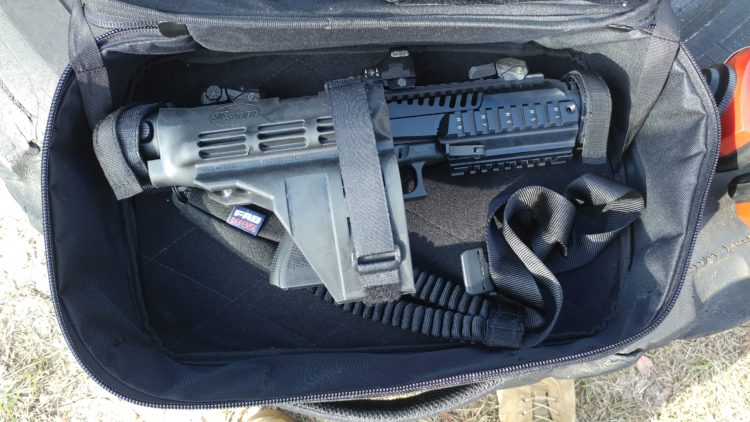 The combination of a Pathfinder kit and a carry pistol is the safest and most secure means to add a trunk gun to your vehicle. It extends your gun’s effective range, makes it easier to control, and gives you a significant control advantage over just a handgun. It satisfies the requirement of a trunk gun, without taking the risk of a gun getting stolen. Even outside of a truck gun it’s a unique and fun way to modify your Glock.