Walking out of a Spotter Up team meeting at SHOT 2017 I ran into a low-key display by CORE Survival.  It totally wasn’t on the agenda, but there they were, and I got stuck.  Probably because the only thing brighter than the actual strobe on display, was the personality of the company president Marcia Baldwin, who tirelessly explained to me product details. 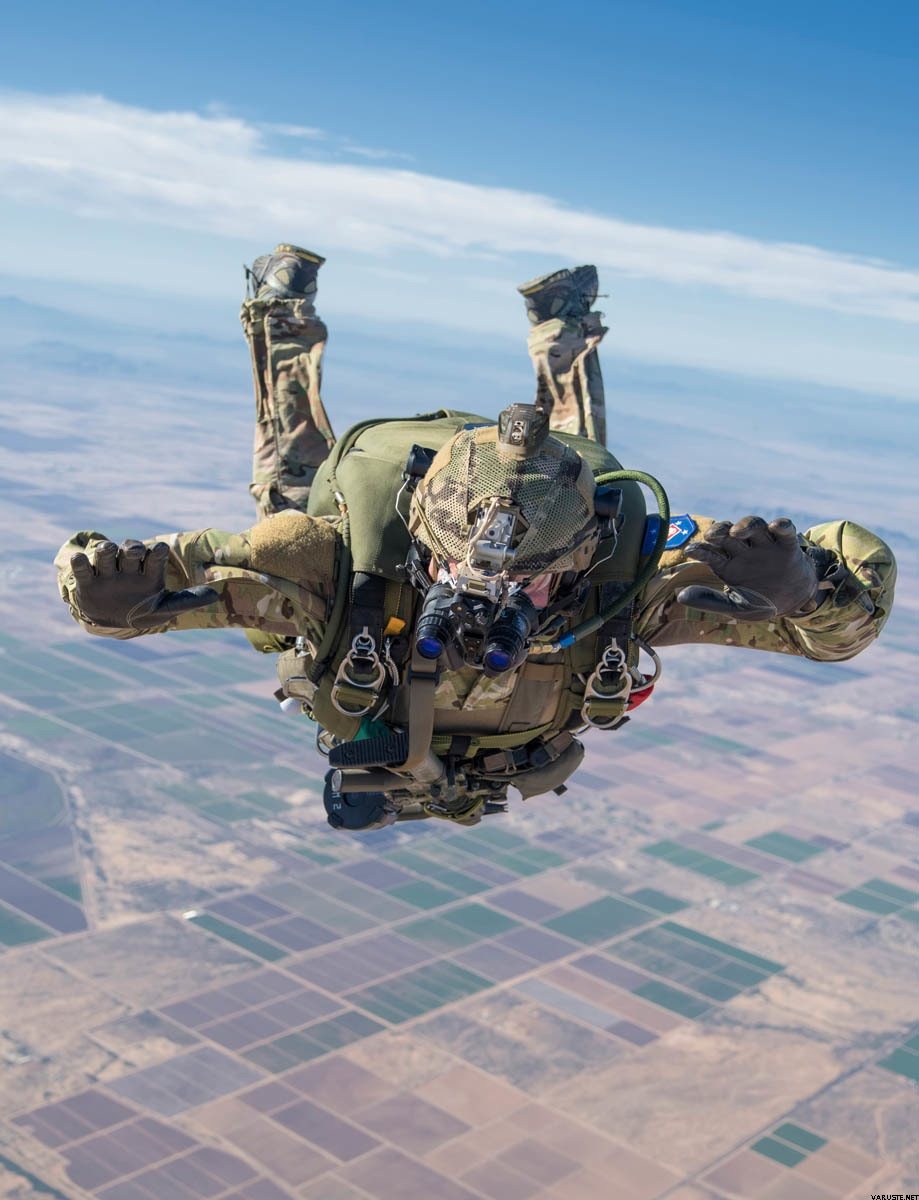 As I was getting to know what the new Hel-Star 6 Gen III had to offer, one thing became obvious.  CORE survival has one mission, and one product focus.  And they are very good at it.  That mission is end-user safety, whether you’re a high-speed HALO-jumping PJ or a street cop serving a warrant.

The variety of applications of this marker light are about as endless as the possibilities of the light combinations it offers.  Over the last several years CORE Survival took user feedback very seriously, and made some fine tune adjustments to the original Hel-Star models. 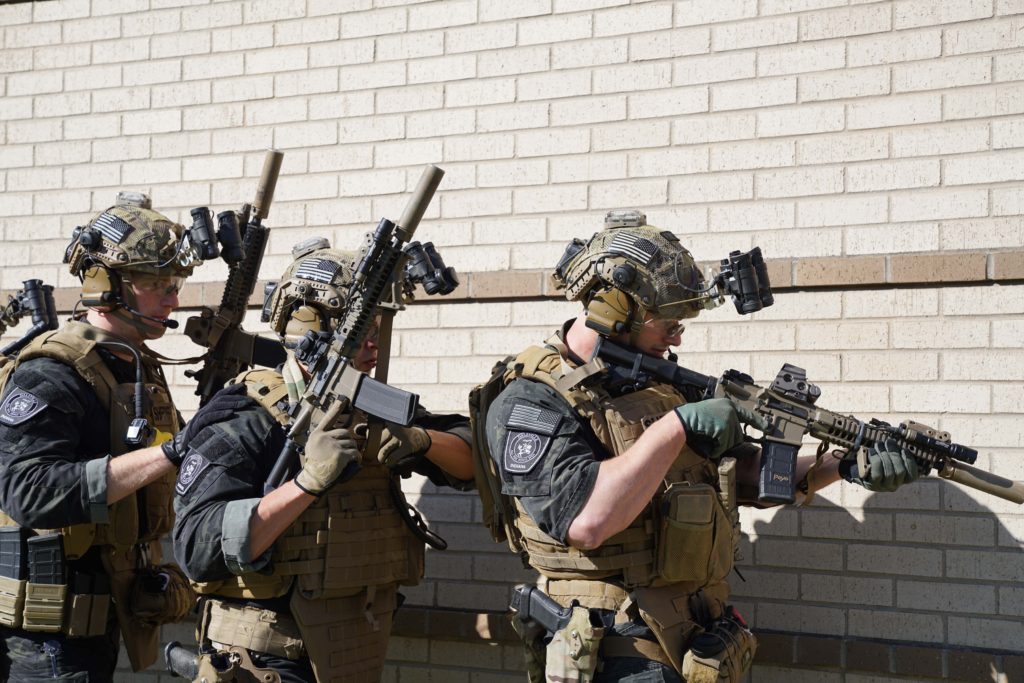 The first thing which sets Hel-Star 6 Gen III apart and is immediately apparent, is its shape.  The aerodynamic shape of Hel-Star was part of the initial production requirement by the USAF PJ’s to have a snag-free, peel-away light.

The signature curve of the light enables it to smoothly integrate into the shape of any helmet, and overall has been “a major influence” in other models and variations of Hel-Star. 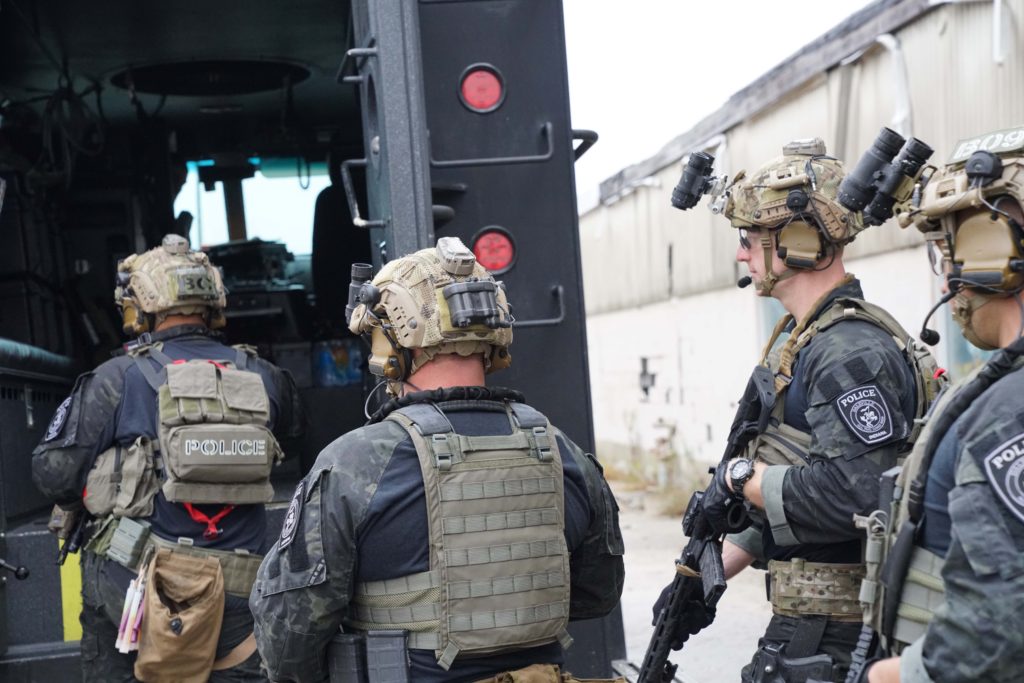 Out of the box an immediate positive is that the battery is a regular C123.

I prefer that over smaller batteries which are harder to manipulate, often need to be stacked together, and are difficult to find downrange.  The battery compartment is slightly recessed on the back of the light.  The cover is hinged, and is easily opened with no additional tools, which is also a plus. 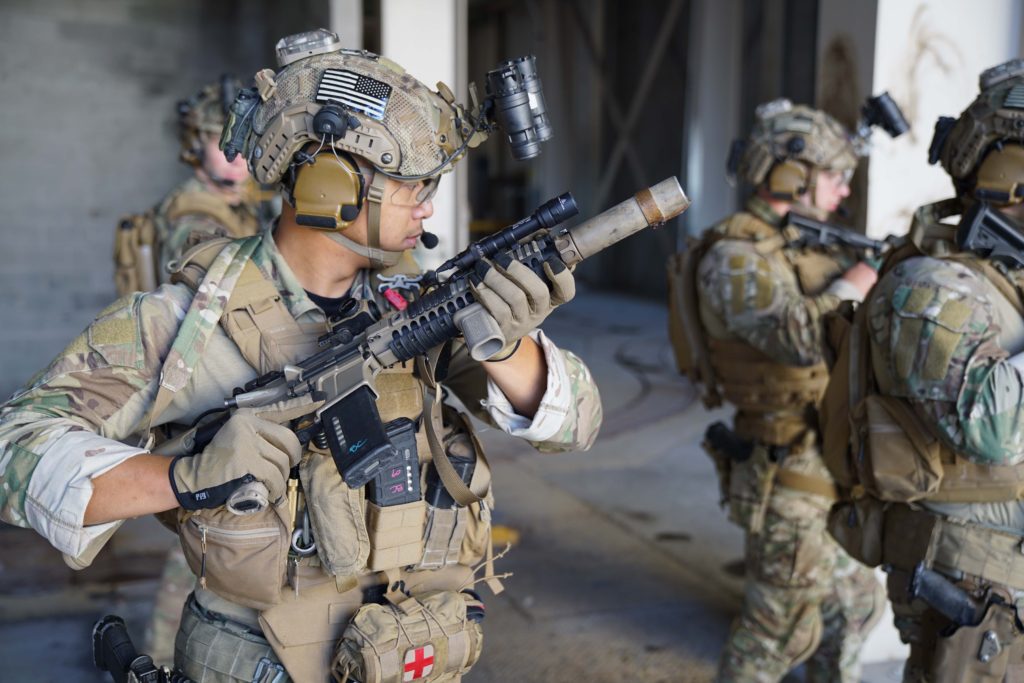 My initial concern was that the cover doesn’t fit over the battery compartment as tight after several manipulations.  I should have read the directions, because the watertight O-ring seal must be properly reset after opening, and addresses any such issues.

As the Hel-Star is intended to be helmet-mounted, it is curved for a really nice, and slim fit.  This becomes especially practical when other thing need to be added to your helmet, such as comms, night vision and counter-weights.  It can go basically anywhere between the lower brim and just short of the top of the helmet. 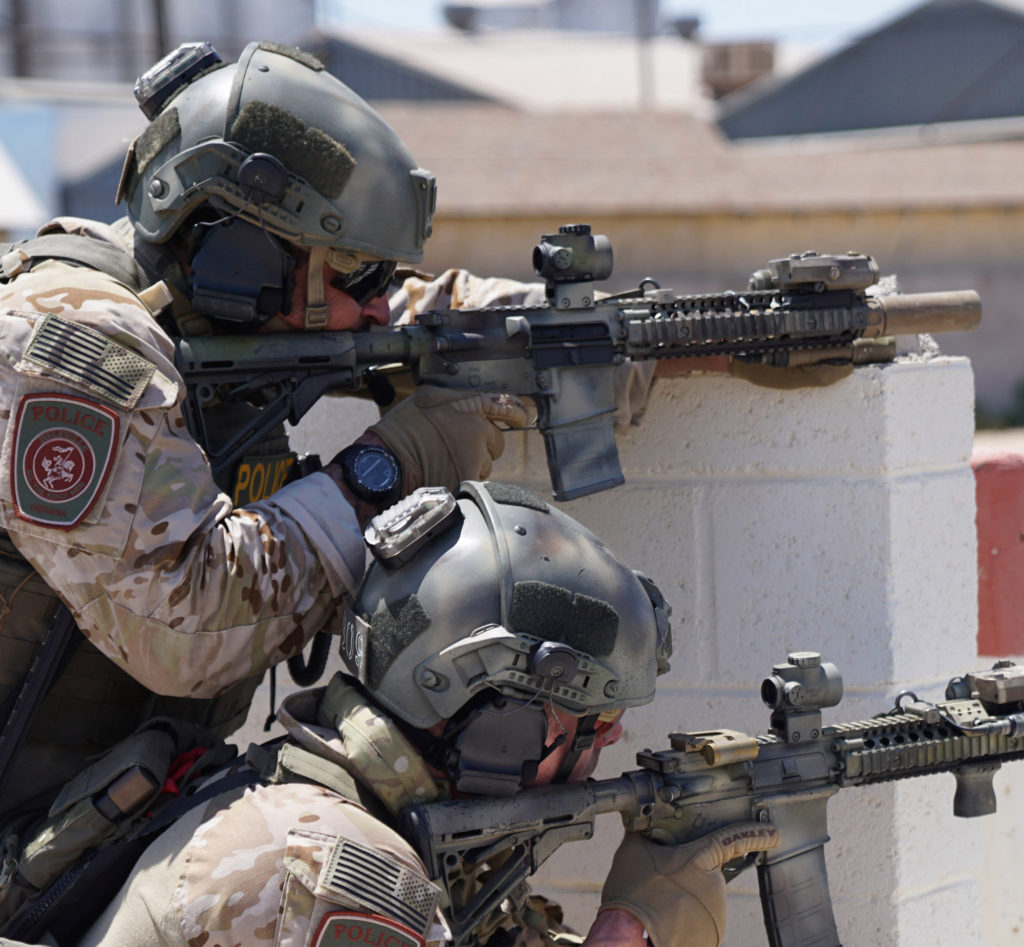 While some lights offer a flat attachment, this limits the placement more to the nape area of the helmet.  The light fit securely on a helmet or a designated Velcro spot on your kit, but I began to wonder if it can fall off during strenuous operations, or snagging on other things.

While a shock cord safety can be easily rigged to assist with that, I was happy to find out that CORE Survival has this addressed for slightly obsessive guys like myself.  The Attach Patch offers an additional piece of material with Velcro, and a nylon tab to secure the light.  It’s a low-cost effective option if your missions require it. 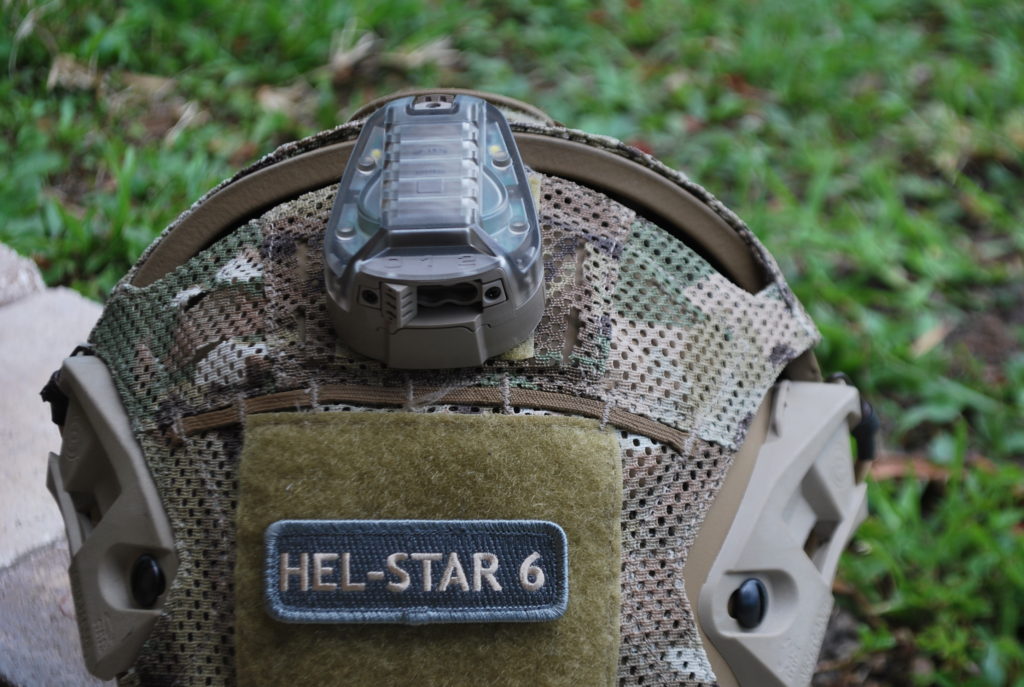 Some models also come with bungee and para-cord attachments to further assist in making sure the marker light stays where you need it, including any MOLLE surface.  The Attach Patch also doesn’t sacrifice one of the key features of the Hel-Star 6, an easy peel-away option. The collaboration with Blue Force Gear for the MOLLE version of the Attach Patch offer Helium Whisper technology, and you can expect the same consistent quality. 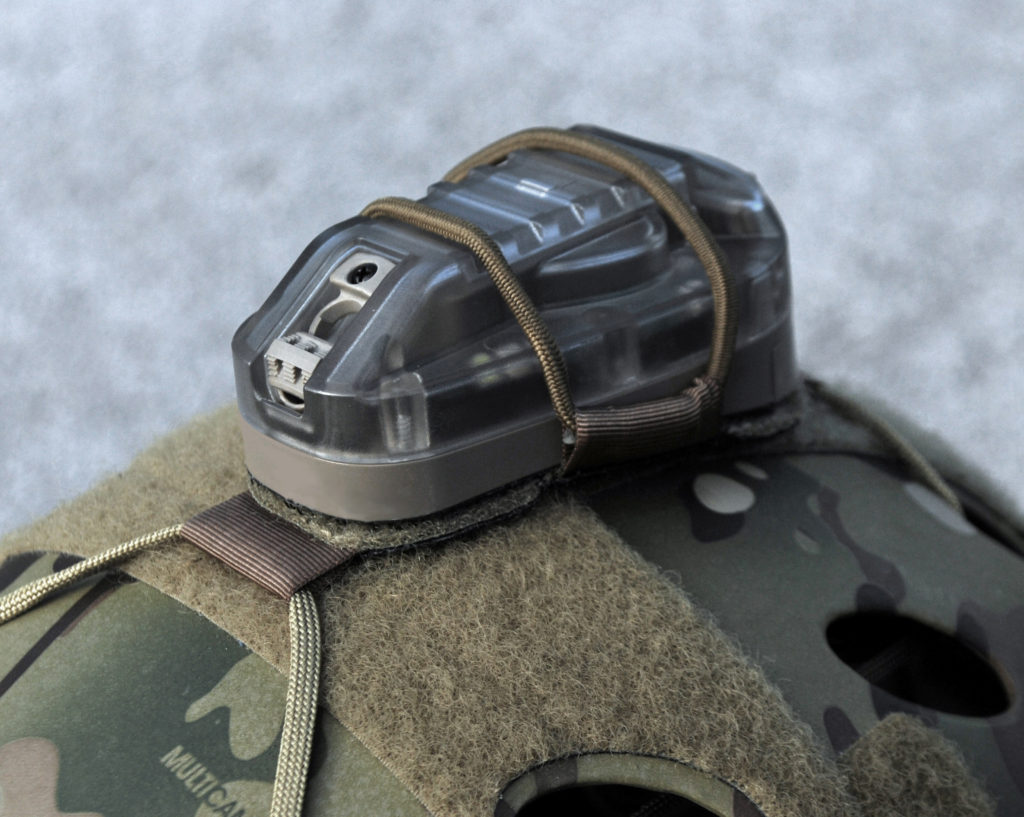 I had the Hel-Star mounted on a K9 vest, and before I could confirm that the light is waterproof, both it and my partner were going for a swim.  I should have known that my dog would need a full SCBA to truly test it out.  The Hel-Star GEN III is waterproof to 130 feet (swf) in open sea, and 300 in lab testing, as conducted by a third-party testing in the Florida Keys.  It also never fell off the vest as we ran through thick brush.

The adjustment of light combinations is instinctive.  I like the fact that the IR switch is completely separate from the main light switch.  After a little repetition, they become easy to locate and adjust. 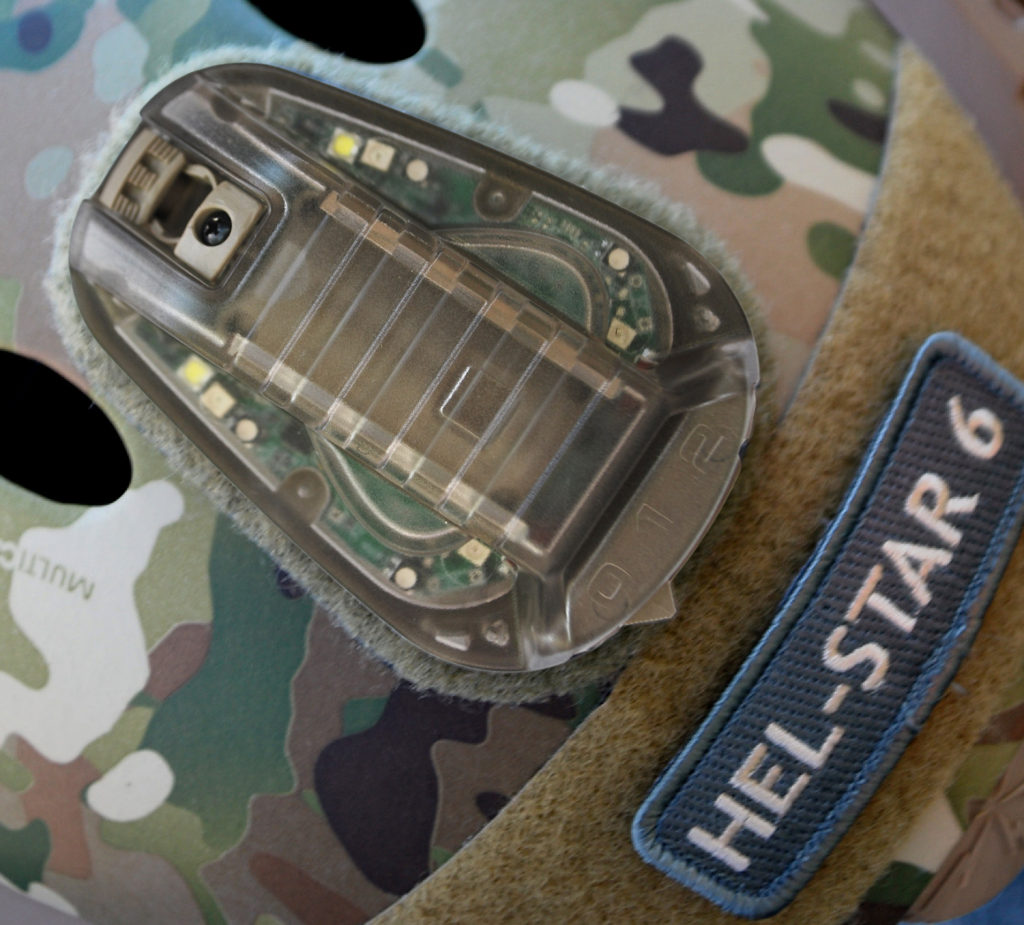 The combination of light colors and flash patterns is almost infinite, and can be requested by the end user prior to the purchase by contacting CORE Survival, or be adjusted in the field.  The later requires a purchase of a programming module, which is cost effective if you have a large or several teams, and consistently require that flexibility.

Aside from that, CORE Survival is happy to accommodate your mission needs, or changes.  The brightness level on the 4 main, omnidirectional strobes is adjustable is well.  It obviously becomes counter-productive if you’re clearing a compartment and are blinded by the guy in front of you.

Aside from the IR in those cases, there are dimmer settings a tactical team can choose to pre-program.  Typically, there are 4 combinations. My model HS-640-01 came with steady green, steady green with white flash, IR flash, and IR bright flash.  The standard flash pattern is 60 flashes per second, but again, can be programmed based on your need such as 30 per second NATO flash rate, Morse Code, or codes unique to units operating within a specific AO.

Another outstanding design feature is that the lighting is laterally visible and tactically omnidirectional, with several LEDs, instead of one or two large LED’s.  To me that’s also a reinforcement of “two is one, one is none” approach, and I’m all for it.  The additional waterproof, visibility and durability requirements were based on requests from the Army Special Operations community, who still have to thank the Air Force AFSOC for the originality of Hel-Star. 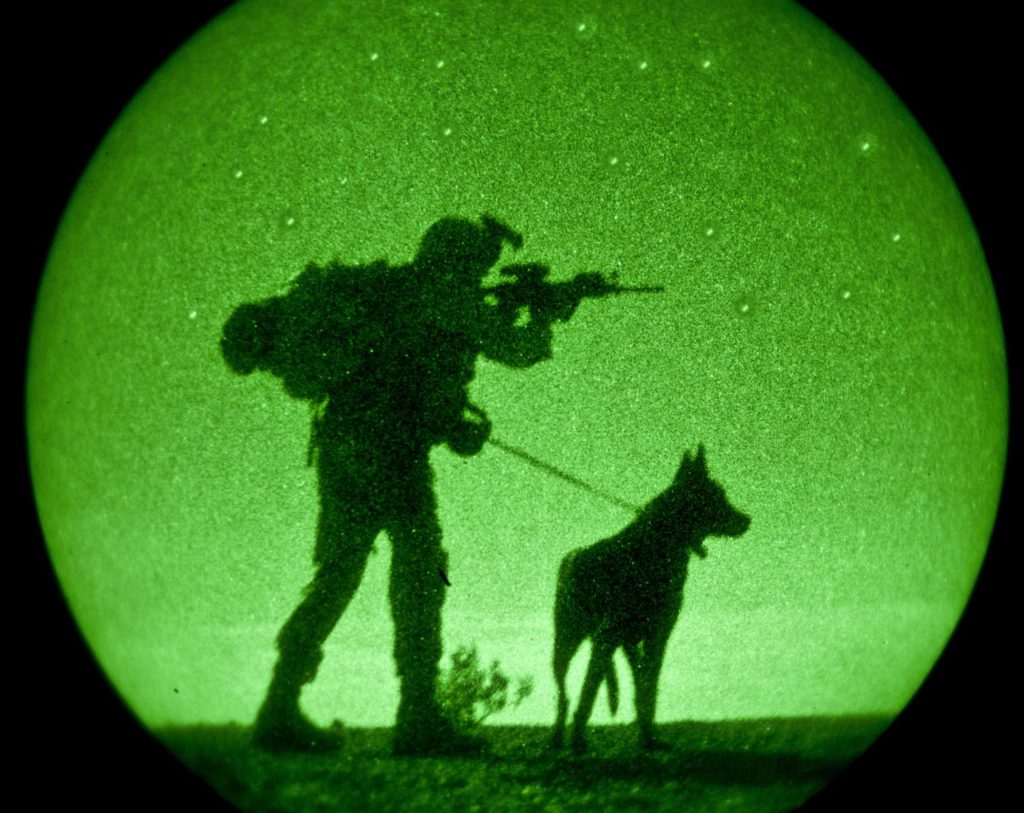 We can all agree that night vision enhances good guy tactical operations, but if your agency offers a more traditional approach of “why do we need it” until it hits the fan, the Hel-Star 6 offers traditional options as well.  Using reflective vests and marker lights has become a common application in crowd control.  The lights I have seen in use are either cheap and unreliable, or closer to $100 and offer limited options. 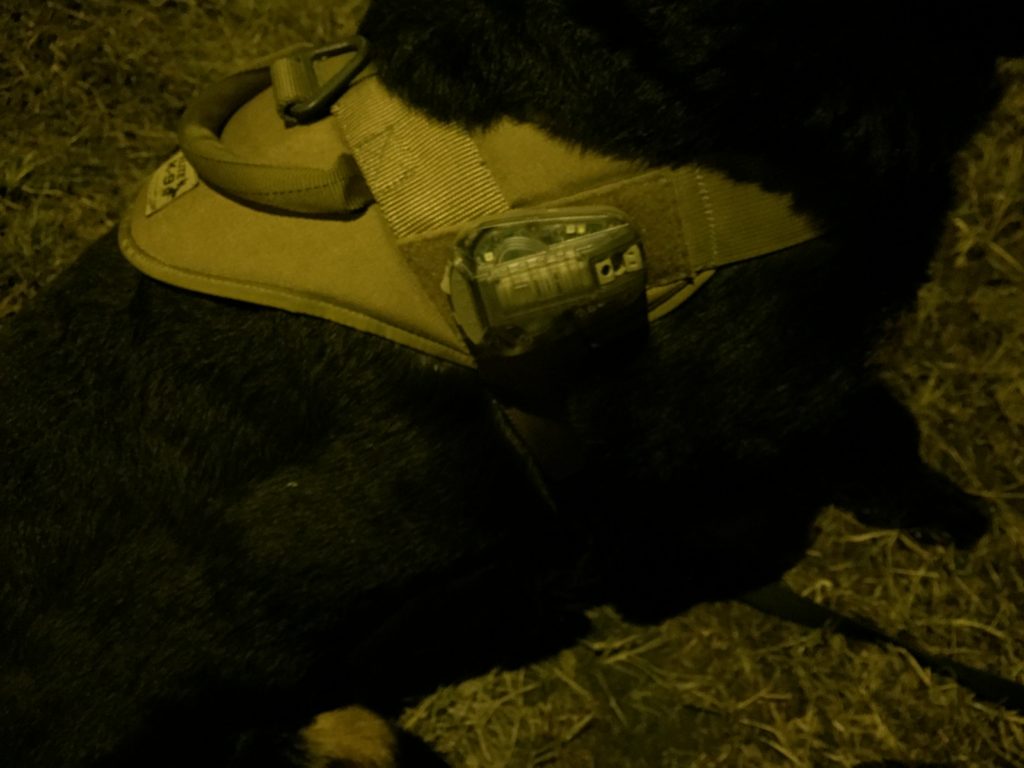 With Hel-Star 6 you can not only identify multiple teams or agencies working the event, you can have all of the options when the “if” becomes “when.”  Another words the product allows long-term flexibility, which is not something that can be said too often in tactical applications.

Individual applications during traffic control, search and rescue and water-borne applications are just some of daily tasks which should make an easy buy-in from an officer safety perspective.  With an MSRP of $176.70, the Hel Star 6 offers options across the spectrum of law enforcement and military specialties.  If you follow the retailer links from the CORE Survival’s web site, you may find it priced lower. 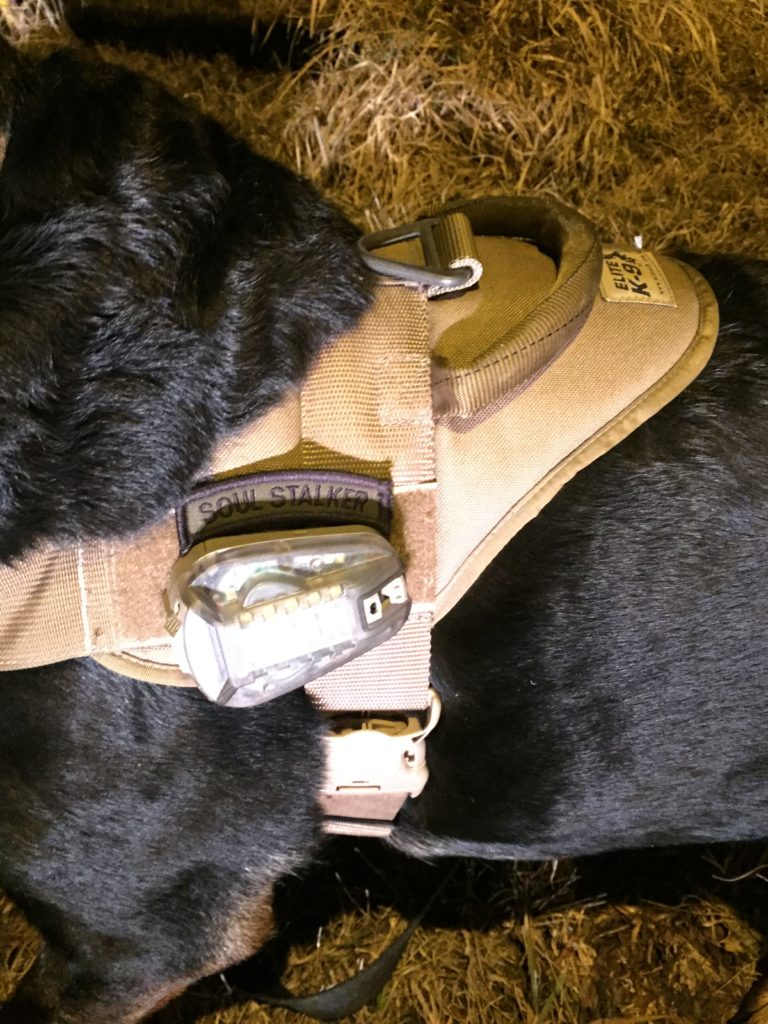 Additional options include the upgraded models of Hel-Star Exo 4 and Exo 5, which are being upgraded to a more robust Exo skeleton body, better waterproof rating and lateral visibility.

They are smaller to be more suited for K-9 applications and gear marking.  They will be available is a couple months for $130 and $149.99 respectively.  CORE Survival’s intended application of utilizing marker lights for airborne, HALO, and drop zone operations is true to the company’s original focus. 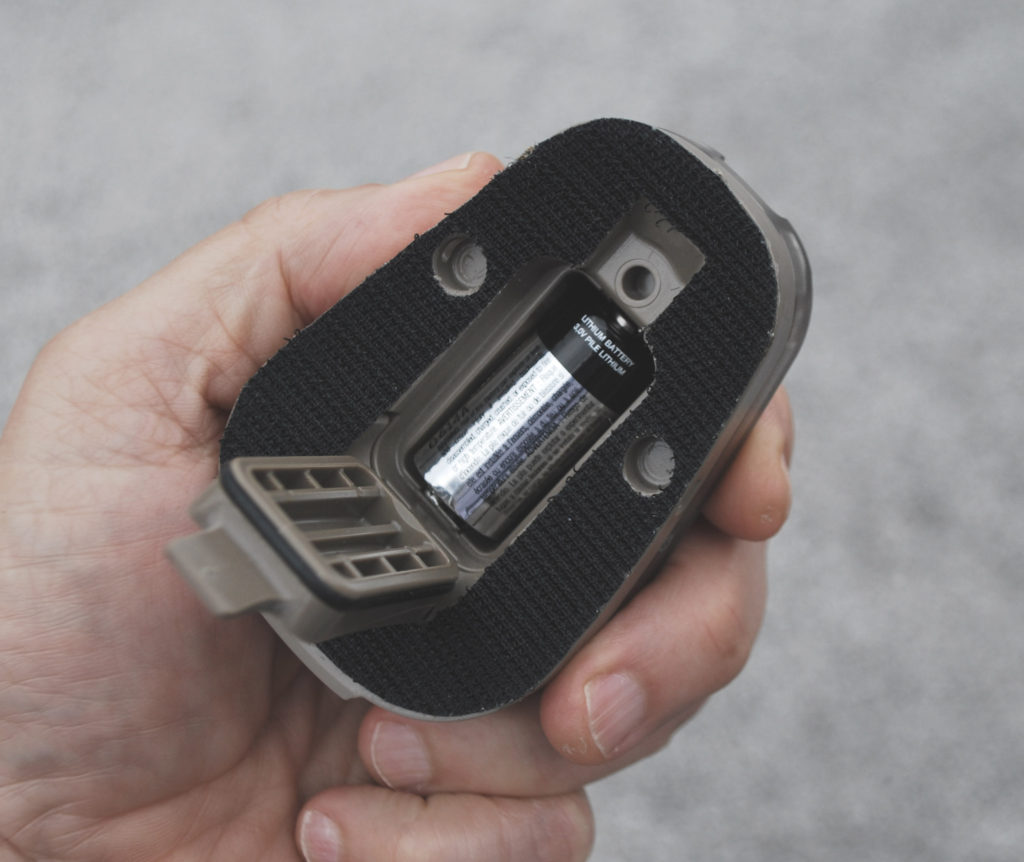 This unilateral company mission and focused applications make Hel-Star and CORE Survival products a top in quality and reliability.

Other products include friend/foe identification (IFF) such as the Hel-Star F2, drop zone illumination, and a really handy JPL –Portable Jump Light Kit to assist with airborne operations for air platform that either need organic or additional light marker sources.  Some of these are wirelessly controlled devices, which expand the mission range and effectiveness.

CORE Survival has dedicated themselves to the development of marker-light products suitable to a variety of dynamic applications in military and law enforcement.  Through the several upgrades and features of initial models, it is clear that CORE Survival is true to their motto of “user defined, field proven….”  Implementation of devices such as Hel-Star 6 product line are an easy and common sense addition to any mission, require little training and fielding time, and offer flexibility to agency budgets.  Please visit www.coresurvival.com or call them directly with any questions.  They are more than happy to help. 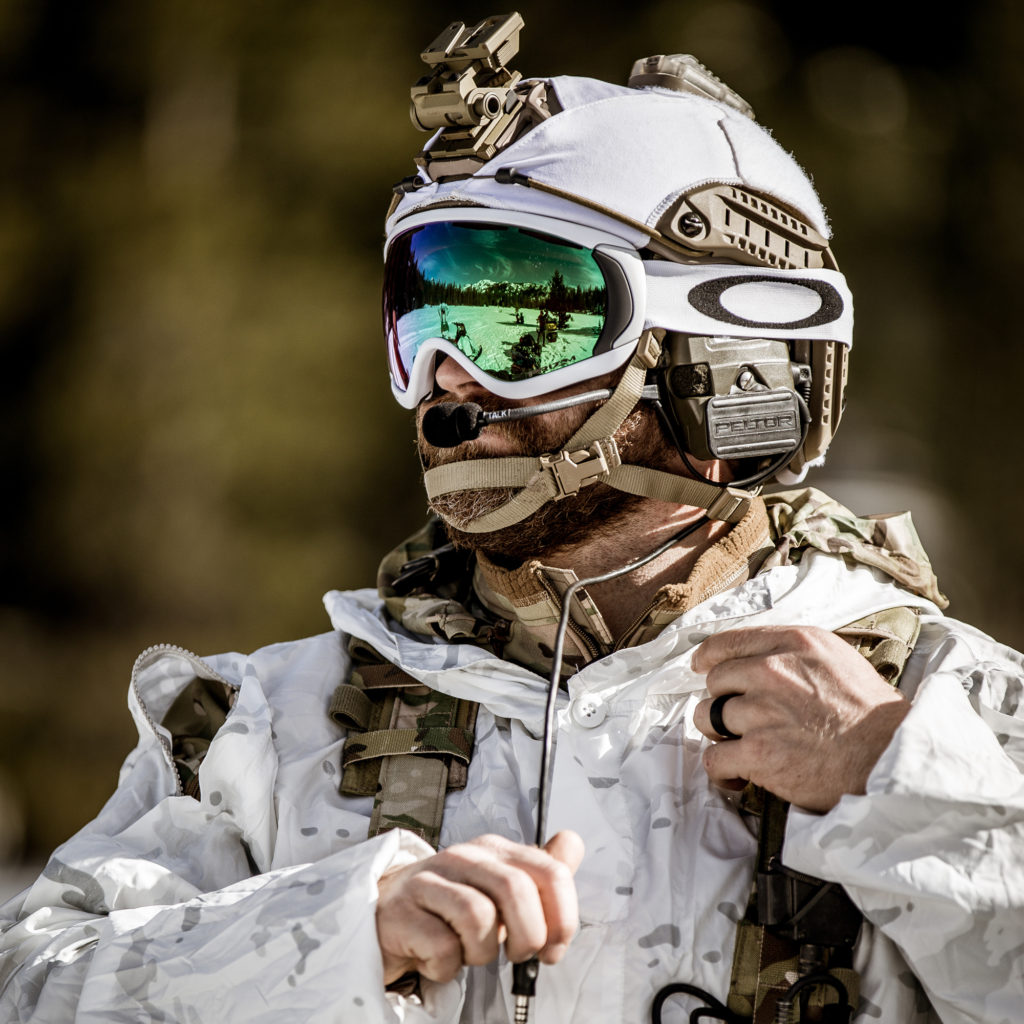 HEL-STAR 6® is a purpose-built helmet mounted LED light designed for airborne/MFF, tactical and other military operations.

Independent testing has confirmed that the HEL-STAR 6® exceeds the FAA’s 3 statute mile visibility requirement. HEL-STAR 6® is built on a platform that allows new technology to be incorporated as it becomes available. As mission demands shift and expand, HEL-STAR 6® can evolve with changing user needs.

The HEL-STAR 6 is very user-friendly; even in the blind.  It is a true full-spectrum signal light whose modes can be quickly switched in the field to accommodate various mission requirements.  The nose of the HEL-STAR 6 contains the mode switch, allowing the user to change between “A” and “B” functions.  The function/power control switch is located at the tail of the unit and moves perpendicular to the mode switch.  This provides the user a clear indicator as to what switch they are activating without having to look.

There are two series of HEL-STAR 6: 620 and 640.  The 620 features a lock clip in the nose that requires a tool for  removal.  When the arrow on the clip is facing the nose, the HEL-STAR 620 will be locked into two functions.  The clip must be pried up, flipped and replaced to switch to the other two functions.  This provides extra security for the user so that he/she can choose either Overt Visible or Infrared functions only, eliminating the possibility of accidentally flashing a visible strobe in the field.

The HEL-STAR 640 Series provides a simple detented switch at the nose for changing modes on the fly.

Please check the chart graphic to determine which model fits your needs.