There are a few businesses over the years that have caught my attention. The majority of them have been veteran owned and operated. From my experience, those businesses seem to have a different way of operating and the products they produce are unique. My fascination with knives started when I worked at Triple Aught Design shortly after leaving Law enforcement. There I was exposed to some high-end collaborations of both folders and fixed blades. 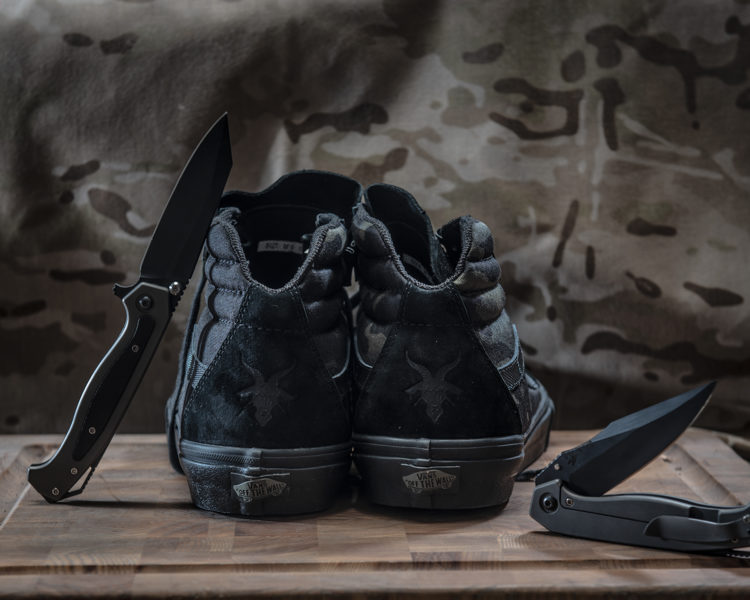 In mid-2014 I came across an Instagram page of some long-haired dude making knives in his backyard. I saw he was a veteran and was recently out of the Navy. But what really caught my attention were the handles he was making. He’d combine uniforms and flags into his handles which gave the knives meaning, not just ascetics. I am all about meaning and symbolism.The name of the company, Half Face Blades, is owned and operated by, Andrew Arribito. A retired Navy SEAL who has his hands in many pies from movies to beer and now knives.

I reached out to him and asked if he was willing to make me a knife using my Marine Corps uniform and SWAT uniform. He was all about it and the process started. We got to know each other and I explained I never went to Afghanistan, just fought in Iraq during the invasion. Without me asking, he offered to include a flag he flew and carried with him in Afghanistan into the blade handle. For me, it was an amazing gesture and it meant a lot. From that moment on I learned more about his business. 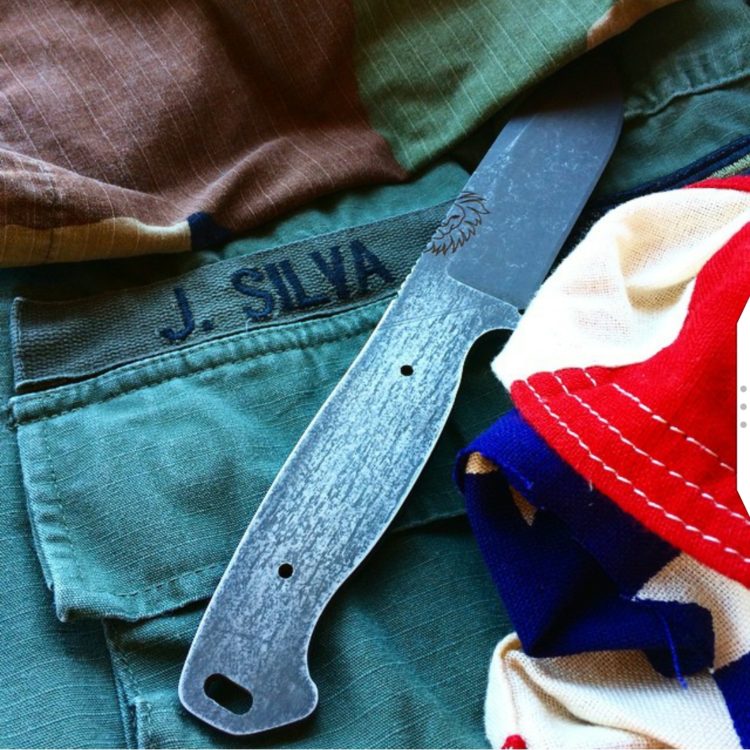 Fast forward to 2018 and Half Face has exploded far faster and bigger than Andrew expected. Today he has moved into a new shop, employs over 10 people and many of them are veterans. He gives back to many causes, does charity work and pays respect to his fallen buddies and those who still serve. All the tools he designs and creates are an homage to his native American roots, his time in the military and his passion for hunting. You can see these threads built into each tool, built purposely for the task at hand.

For the longest time, I knew he has been itching to release a folder. That day has finally come and I was able to get my hands on two prototypes to test out prior to the official launch.  Speaking with Andrew I learned that he wanted his folder to be priced very competitively and still meet his standards. At around $450 for the production models, I think he definitely accomplished his goal. With that price it puts him square with other companies like Hinderer, Microtech and the like. 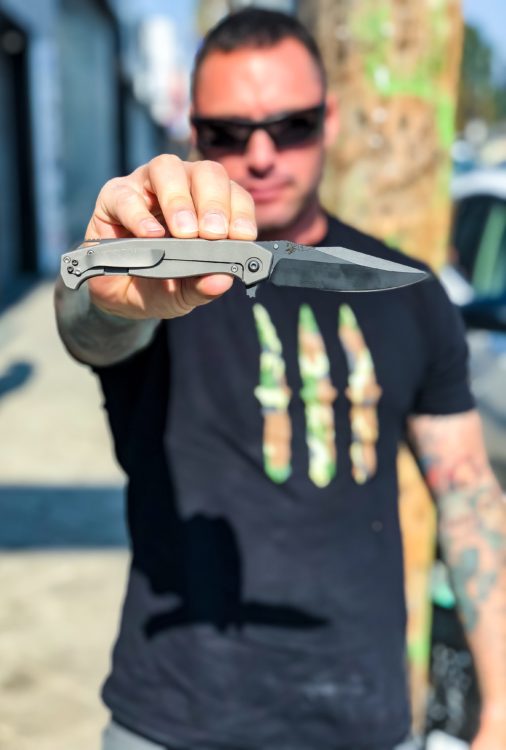 The materials are as follows: 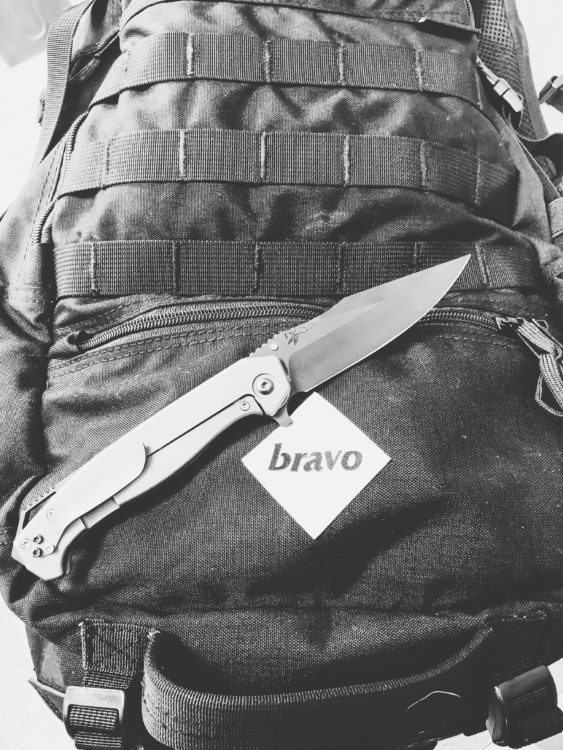 All in all, it is a solid knife. In the hand, it feels nice, not too big and has a premium feel to it. The flipper is nice and pronounced with aggressive enough grinds. It opens very easily and the lockup is nice. The blade has a nice audible click as it falls even into the handle. There is an adjustment screw in the frame lock for those wanting to tune it to their taste. The lines of the handle and frame are clean and smooth. While the spacer has a little more aggressive lines that set the look nicely. On the spacer are a series of grinds that assist anchoring the knife into your palm. There is also a lanyard loop in the spacer, which is a nice touch.

The geometry of the knife is outstanding, it feels balanced and being on bearings, it opens clean. During the opening process, the blade glides and locks with ease. Lockup is clean, the blade doesn’t have any room to move when open, everything is very precise. Exactly what you would expect from a higher end folding knife. My favorite part of the blade is the grinds. These grinds mimic the Crow Scout fixed blade. Very nice touch and again, paying homage to the first knife he released and started it all. The thumb stud is a little larger than some knives. I found this allows you to easily open it with a flick of your thumb if you so choose. The clip has a nice tension that secures it in your pocket.

A small lip on the end of it makes it easy to remove for use. It also has the lines of a feather, which continues the American Indian theme you’ll find in all of his work. The G10 liner on the handle sets off the knife well and adds a different texture. Some changes on the final production model will include an engraved feather on the clip and refined hardware. 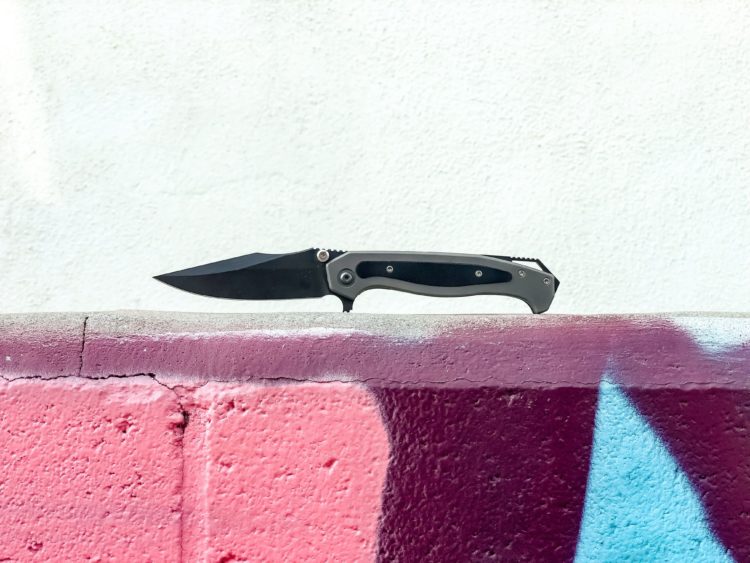 Over the years I would hound Andrew about when he would release a folder. He always said, “I am still working on it, it needs to be right”. Well, I can see why he always answered that way. He fucking killed it. Solid work, a solid product made here in the USA and by the hands of someone who knows what these tools need to do. Great job by the crew at Half Face, keep putting tools into the hands who need them most, our nations warriors, hunters, hard-working Americans, and knife enthusiasts.

Pre-Order for both the Crow Folder and the Disaster Folder will be live on halffaceblades.com at 1700 hours on November 16th for all those who would like to get in on the first drop!