Considering the fact that by far 80% of our sensory information is received through our eyes – working in low to no light conditions is pretty much stretching out our human capabilities – especially when it comes down to tracking / identifying targets or orientation in and around obstacles in CQB settings. In this short article we will highlight several important points from the video above which were taken during one of the first Low light run of our students. 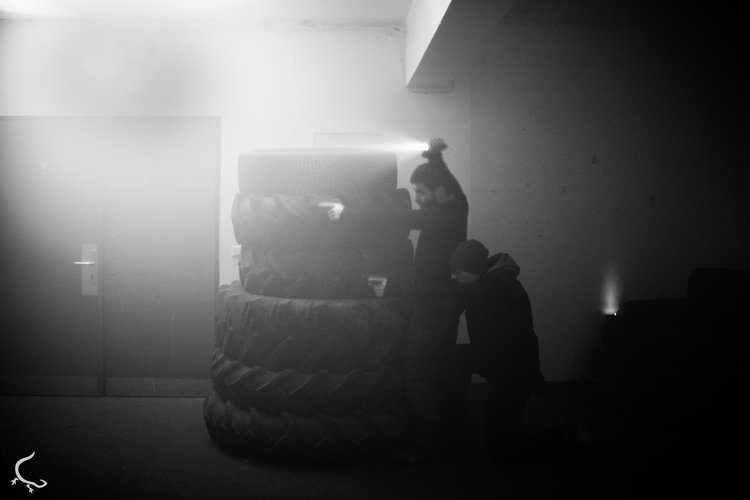 Communication is great. It saves lives and it can forecast problems and I for sure keep things more effective rather than efficient. The issue however with the average  teams when it comes down to communication is that they tend to over do it  and essentially to echo their reports . A good example would be what individual ‘X’ sees VS what the solution is by individual ‘Y’… all instead of actually…doing it out of basic individual understanding. Such situations typically happen when the person is less experienced with his team and the environmental settings.  From experience, especially when its dark, people tend to ‘dig in and hide’.

Back to the video – The team approaches 2 significant issues:

Both are equally problematic, especially when you get overlapping doors from the front or the sides, as they encounter.

What’s happening next is that the team begins to overdo their communication. While everyone knows for a fact that the threat was last seen in the T section ahead (few minutes before this video was taken) The point man is starting to focus on the immediate exposures rather then lateral by applying an X. Which is totally ok… However, by over communicating (and creating an auditory signature) they lose the momentum and the element of surprise in a rather static position. While their pistols are still covering essentially all directions – They basically get a better understanding to any human in their vicinity of their immediate location, distance etc and perhaps strength. Given the fact that their current position is in a tubular shape – they have no cover, or in other words – their survival chance drops significantly.

This is where it gets very interesting. As a follow-up for the communication points above – If you take a closer look, the team reduces its light beams on the background of the T sections (which, as we normally teach the a T section is a mobility bridge from one concealment to another) in order to investigate or take closer look at the immediate obstacles. While I have to admit it is a fair debate due to numerous reasons (tactics VS employment of light source) let me keep it simple – In CQB you will most likely never get enough guns on the threat or enough flashlights or enough ammunition. With that being said a careful deliberate consideration or correct prioritizing of problems at hand normally help the individuals to navigate their ship of decisions between the hard rocks of reality.

Back to the video.

I outlined here a short script of ‘’what went wrong’’.

The way we used to handle corridors in a solid team capacity was to light up the center every few seconds (Greatly depends on context, I remind you!) until the end of the corridor (only pointmans & wingmans employ the beams to avoid back light). That’s why if any threat is emerging from the unknown his initial exposure from darkness to full light will blind him and turn him into a reactive state rather than proactive. The issue with constant light (and again it greatly depends on where and how) is that for the observers from the sides (be other rooms or corners, or windows), it gives an indication of your estimated location, distance…and above all level of readiness.

In other words it means basically that it gives the team an indication, as to what the team is actually looking at. I realized it back in the day by doing a lot of force on force in the military that commonly the threats relied a lot on our way of flashlight employment to the level that when they used to hear us coming (can’t hide 12 guys raiding a flat under limited time) They used to go out full snackbar mode as soon as they recognized that the ‘eyes’ (aka flashlight beams) are lowered or pointed at something else, giving a clear statement that this particular area, is not being in fact really covered.

As a follow-up to the visual signature of a search light, what happen next in the video is that the entire team focuses its light source and communication on the immediate obstacles. Here we can witness the domino effect of a one team member ignoring / leaving a constant responsibility for the next guy to get it while the next guy does..well the same.

Essentially what you see is how the flashlights are leaving the most dangerous point in the whole situation – The T section itself and the overlapping door that is to the 12 of the team basically in the dark, creating that black void.

What is basically happening is that as all flashlights are ‘leaving’ the T section, the Threat (hiding to the right) is technically a dark in depth working space that will also allow him to shot and move to the other way. What would happen next for the majority of people under stress registering a sudden flash from X direction followed with a loud noise – is that they will focus on the last image of flash, and concentrate on that certain spot failing to understand that the threat actually moved. or in this case, fixed to the left. What we should learn from that, is how important if not critical is the training in Low light conditions is.

Just an additional point I thought to add – an important principle ignored by both experienced or none experienced shooters and You can actually see it often in the video is that the flashlights are being ‘dumped’ here and there. While this is in fact a very realistic behave under stress and fear in darkness and especially due to the simple fact that the human wants to always mimic the environment settings he is used to since birth (light, in this case)  the individuals in front actually failed (prior to contact) to follow the principle we normally practice to maintain and that is the holy alignment of Eyes, Light, and gun.

A proficient low-light shooter will keep his eyes, weapon and light aligned most of the time unless specifically directing them in alternate directions for a specific purpose.

Remember the principles of LL –

3. Shooting from the depth.

Will keep it simple – shooting from the depth is very dangerous and hard to avoid in many cases. that why we practice always how to earn the angle, and get our gun into a safe trajectory around our friends or obstacles. in this video, the guys essentially shot from the depth. you can not really see it, but the majority of the team from either front or back, opened fire. Therefore when working in Low light conditions, make sure, that all team member’s are familiar with formations in such light conditions. We highly recommend you to practice it in dim light conditions first.

In structure shapes that have continuously nature, and essentially no points of concealment or cover do not stall, do no over do things, make sure you have a fail safe and not just guns projected at ghosts. Also it is important to Include a system in your CQB practice, not the look for corners and 1 2 3 4 numbers and patterns. It is through a mutual systematic visual language that team members are able to pick up problems and speed process it to a certain solution. That why in our basic CQB courses we focus up to 3 hours on geometry, shapes and a more of an architecture approach.

Learn more about our friend Eli and Project Gecko: