A question that keeps coming up in the preparedness circles is whether or not there is a role for the “sniper”. Due to the variations in why people choose to be prepared, I’ll leave that up to you. What I will do is give you a brief definition of a few terms.

A simple definition of a sniper is skilled military shooter or spotter/shooter team that is tasked to engage targets from concealment, usually at distances that exceed the enemy’s standard weapons and detection capabilities. Often they act forward of enemy lines and more often than not, simply conduct surveillance and report information back to higher headquarters. The role has been popularized by Hollywood which often portrays some very unrealistic events.

The sniper employs a combination of skills which include camouflage, concealment, radio communications, and an in depth knowledge of exterior ballistics and fieldcraft, among other things. A sniper may engage targets from any range within his rifle’s maximum effective range, sometimes pushing that envelope even farther. 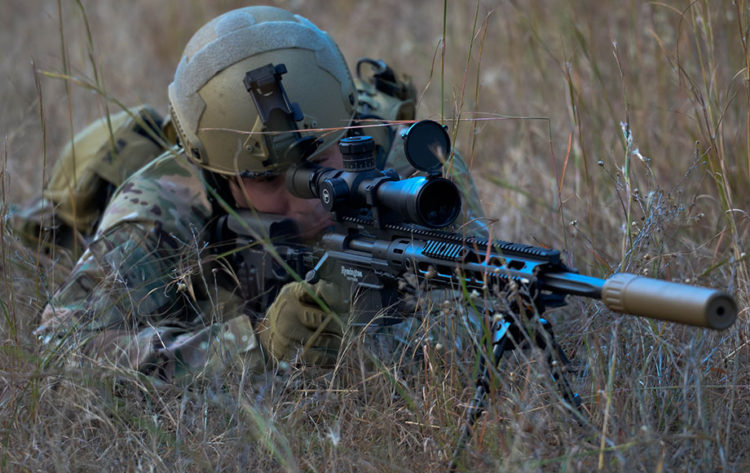 Typically targets will be beyond 4-5 hundred meters, which is beyond the range the average soldier is trained with the typical service rifle. Typically, a sniper carries out specific missions and has little to no support. Some examples of rifles used by the Sniper are the SR-25, M24, Mk13, M14, Remington MSR and many others.

The Designated Marksman (DM), sometimes called Squad Designated Marksman (SDM) are terms that are often mistakenly used interchangeably with the term Sniper. The role is entirely different. Their role is to provide rapid accurate fire for their fireteam out to about 500 meters. They usually use more accurized versions of the weapons used on the fireteam, though not always the case. Some examples would be the 5.56mm SPR Mk 12, the M110 SASS or other semi-automatic rifles.

Now that we have those two definitions out of the way, its up to you to decide if you have a need for either of those two skill sets. I have found that the sniper concept has been romanticized to the point that folks want the skill more than need it.

Just be honest with yourself and say you are enamored by the concept and just want to shoot at those ranges for fun. That’s perfectly acceptable. Now for the real meat and potatoes, what it takes to lay down precision fire at long distances. I don’t care if you have more money than sense and spent all your preparedness money on an $8000 suppressed Surgeon rifle chambered in .338 Lapua, topped with a Knightforce scope, if you don’t have the knowledge and skill to employ it, you have a heavy telescope at best.

Don’t get me wrong, equipment choice and quality are VERY important but skills are equally important. You have to be able to shoot tight groups consistently. There are a lot of factors involved it hitting a 10” target at 1000 meters, which seems to be everyone’s dream. Let me explain:

Range estimation is paramount to shooting at virtually any distance. Contrary to what a lot of people think, bullets don’t exit the barrel and go like a laser beam straight to the target. Gravity immediately affects them as soon as they exit. As a matter of fact, if two projectiles, one fired from a gun, the other dropped at the exact same time, both will hit the ground the exact same time if the run is fired dead level. 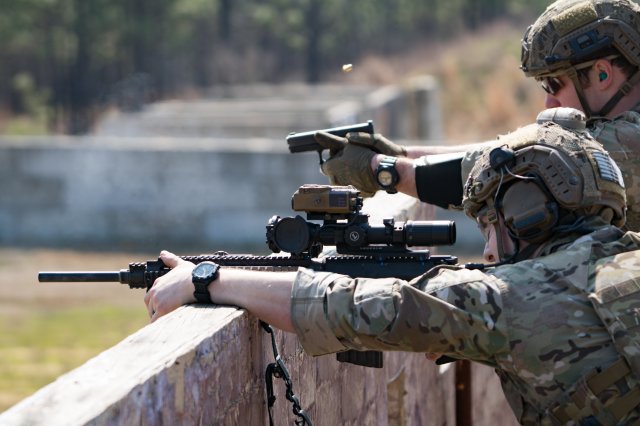 To compensate for gravity, we aim higher, that means the bullet goes up to it’s “max ordinance” then comes back down to meet the point of aim. The scope is zeroed for a specific distance. This actually corresponds with another point along the flight path. For example, the Army zeros the M4 at 25 meters which results in a 300m zero. This allows you to use ranges with much shorter distances to zero for longer distance. Range estimation becomes very important because, if you don’t know the range to the target, you can’t compensate for the bullet’s trajectory.

For example, if you have a 600m zero on a 308 rifle, depending on bullet type and environmental factors, it could drop 250 inches at 1000m. Imagine the drop with a 100m zero! Again, regardless of how expensive and tacticool your rifle is, if you do not understand this you will miss a 10” steel plate at 1000 yards, not to mention a 19.5” x 39” torso taget. You MUST know the distance to compensate for gravity…unless you are shooting a laser beam.

Now that we have discussed some of the factors that affect where your bullets impact, lets talk gear selection. Semi-automatic or bolt action? Bolt guns are simple, reliable and inherently more accurate than gas operated rifles. The major disadvantage is that for the average person, they are slower. Most beginners also tend to remove their face (break the cheekweld) from the stock each time the cycle the bolt. One can overcome this with practice and training.

The semi-automatic rifle has more moving parts, thus is more susceptible to malfunctions and people have a tendency to just keep pulling the trigger because, well, they can. This also heats up the barrel. They also tend to cost a little more (for a good one).

On the up side, you can have a larger capacity magazine, because it self loads you don’t tend to remove your face from the stock (so you are still looking through the scope for a follow up shot), and you can shoot faster.

In my opinion, I bipod is almost a necessity for a long range precision rifle, as well as a good sling and a shooting sock. Always cheat when you can. All 3 of these can take a lot of human error out of the equation and that’s a good thing. A bipod can be extended and put against a wall to provide a good supported position for shooting from the standing position (just be cognizant of your muzzle). A sling can be wrapped around your wrist to provide stability. A shooting sock can be placed under the buttstock to provide a nice, squeeze adjustable rest which acts similarly to the bipod. There are many uses and variations but I won’t go into them all.

I have omitted scope selection here because I think it was covered enough for this article above. However, this is a good segue into range finders. If your scope doesn’t have a reticle that allows you to accurately calculate range (or you don’t know how to use it) you need a rangefinder. They aren’t exactly cheap either if you get one that can accurately read out to 1000m.

One does not simply buy a Mosin-Nagant at the surplus store and go to the nearest 1000 meter soybean field and slay targets. While that gun could, with the right modifications and shooter, do that, why not get something from the modern era? There are people that shoot 1000 yard (learn to use the metric system if you want to shoot long range) matches with old 45-70 Sharps rifles from the 1870s with iron sights but does that pass the smell test for the prepper? If it was so awesome, why aren’t we (Special Forces) using it? I can tell you it isn’t because of budget cuts.

To put this into perspective, I’ll give you the setup of one of my frugal long range precision systems and it works. Remington 700 PSS in 300 Winchester Magnum-$700 (I recommend a 308 due to short barrel life of the 300WM), Larue 20 MOA base-$75, Les Baer 30mm scope rings-$100, 20 year old Leupold M1 Ultra fixed 20x scope-$1000, Harris adjustable short bipod with swivel lock-$90, adjustable cheekpiece on a modified factory HS Precision stock-$120, tactical bolt knob, trigger job and threaded barrel with a muzzle brake-3 organic chickens and a bunch of free range eggs or about $200, a Leupold rangefinder-$500 and Ballistic AE ballistic app for Iphone-$20. That’s a grand total of about $2800 but keep in mind, this is a system, not just a rifle.

I have a bunch of other accessories like a drag bag and other things that I did not count. Most of the accessories on this gun were much cheaper and I got them in trades but those are realistic numbers if you are paying cash.

You can do it cheaper by getting different brand names of items but do not skimp on the scope. The barrel and the scope are the two most important items of the rifle in terms of accuracy and long range shooting.log book One scope I recommend is the Bushnell HDMR with a Tremor 2 or Horus 59 reticle. Those reticles seem complicated but once you know how to use them they are deadly and worth their weight in gold.

The Bushnell offers all the same features of the infinitely more expensive tactical scopes with near the same quality for 1/3rd the price. If you look you can find someone trying to sell a used one cheaper than the average $1500 price tag. I know that sounds like a lot but you can’t put a cheap Chinese scope on a gun and expect to consistently do what the big boys do. 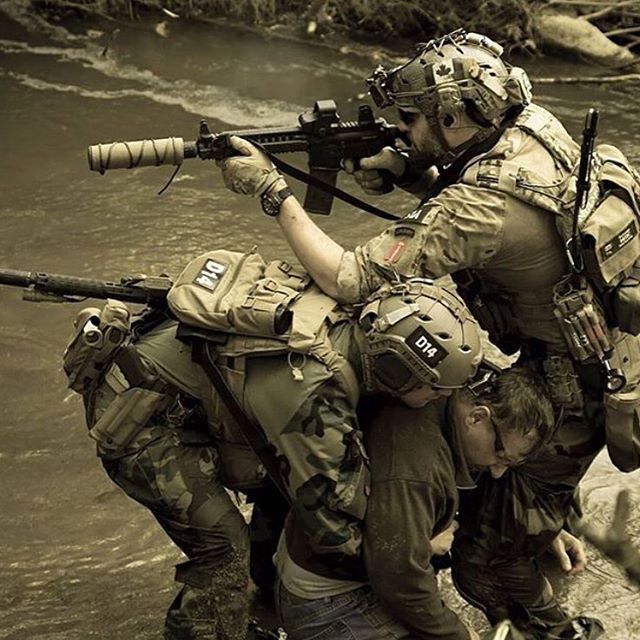 What does this all mean? Shooting precisely out to 1000m (which appears to be most peoples goal) is not really that easy, it requires a lot of training and cannot be consistently achieved with crappy gear. Is it worth your money to have this capability? Is the capability even a realistic goal in your preparedness scenario? If this is still something you would like to pursue, let us know.

We have Special Forces Sniper qualified instructors to teach you. You don’t need an $8000 setup, we can teach you within the limitations of your current equipment and you can grow from there. However you must know those limitations and have realistic goals. There is a tremendous amount of information to be covered on long range precision shooting and this article barely scratches the surface.

All content from this article courtesy of our friends at Cagmain.com

All images but bottom two are stock images