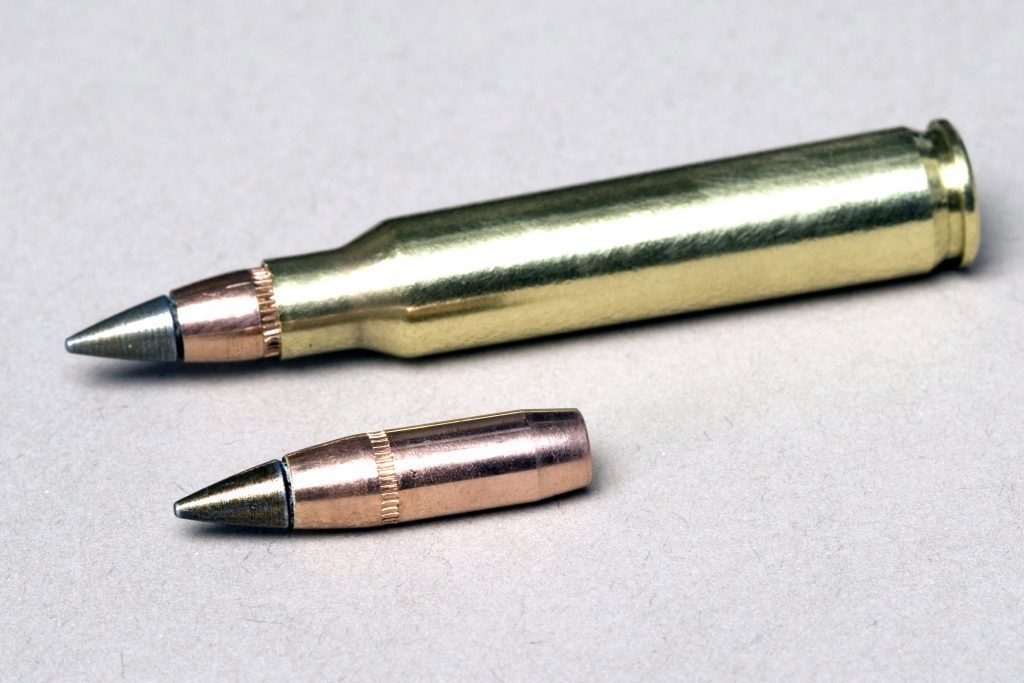 M855A1 Enhanced Performance Round and its “green” bullet. US Army Photo

Get ready.  I’m about to overturn what a lot of knowledgeable “gun people” think they know about the Army’s M855A1 “Green Round”.  There will be gnashing of teeth as angry keyboarding hammers out responses that will most likely ignore the facts I’m about to share.

What’s prompted me to cause this upheaval in “common knowledge” is the deluge of misinformation that invariably follows any discussion or news about the Army’s M855A1 round.  Numerous well intentioned (and not so well intentioned) experts disparage the round and imply a lack of capability because of its “green round” or environmentally friendly roots.  A deluge of disinformation will certainly accompany the Marine’s pending decision to adopt the Army’s M855A1 round, a result of congressional questioning on why the two largest US ground forces use different ammo to fight the same enemies.  Sadly their effusions of wisdom spring from a place where less than half the true story is known.  “Here’s the rest of the story.”

The fact is M855A1 is an extremely lethal and versatile round.  Its lethality and capability to penetrate a wide variety of materials is largely unaddressed in media reports but irrefutable in practice.  What’s even more fascinating is the largely unknown chapter from the last decade of M855A1 development history.  A history that started in an Army initiative to find a round that would minimize lead pollution on its ranges but was surreptitiously hijacked to  answer a need from the field for a more lethal round than existing M855 ‘green tip”.

Most have heard portions of the Army’s torturous development of an “environmentally friendly projectile” or “green round” starting in 1995.  The Army, the largest service contributor to lead pollution had serious and valid concerns about lead from ammunition leeching into the environment and giving environmentalists “ammunition” to close training areas.  It’s a phenomenon that has occurred on Army posts from coast to coast.  The Army more than any other service, has training areas not only in the middle of nowhere, but also in close proximity to environmentally super sensitive parts of the country where portions of its over 500 thousand man Guard and Reserve forces train.  The impact of these ranges being closed for an almost million man force was just too big for the Army to ignore as it stumbled along trying to create an environmentally friendly round until a meeting over a decade ago in 2005.

Major Glenn Dean an acquisition officer in the small arms and ammunition field wrote, “In Search of Lethality: Green Ammo and the M855A1 Enhanced Performance Round”.  It’s the largely unknown backstory of the development of the M855A1 round.  It speaks of a 2005 meeting at the Lake City ammunition plant and attended by representatives of Project Manager for Maneuver Ammunition Systems (PM-MAS), Army Research Lab (ARL), Army Research, Development and Engineering Center (ARDEC), US Army Infantry Center (USAIC), Special Operations Command (SOCOM) and ammunition contractors.  These are the key players when it comes to small arms development for the Army.

They were there to rescue the Lead Free Slug (LFS) round, the result of an almost ten year Army effort to create a lead free round to solve the looming range lead pollution problem.  The LFS replaced the lead core in M855 “green tip” with tungsten which was discovered to keyhole (hit targets sideways) making it unusable for training or combat.  Tungsten was also discovered to have links to cancer making it decidedly anti-environmental and wasting all of the Army’s effort to field a green round.  As the contractors explained the path forward, the Infantry School representative interrupted and asked a question that has all been but ignored yet revolutionized M855A1 development.  The heavens opened and common sense poured out as he asked if there was a way to create a more lethal round since there was a war going on!  The SOCOM representative added similar sentiments.

A well-known shortcoming of the then largely fielded M855 “green tip” was it produced unpredictable effects on targets with “through and through” (rounds would penetrate individuals with no visible immediate effect) wounds being too common.  SOCOM fixed the problem by adopting Mk262, a round four times as expensive but still affordable for a unit 30 times smaller than the armed forces.  Mk262 is a very accurate round (something special ops troops can take advantage of due to their better resourced and conducted marksmanship training).  The projectile itself is manufactured in a way that maximizes accuracy and as an unintended consequence has strong antipersonnel capabilities.  The relatively expensive price of Mk262 makes it unrealistic for widespread Army issue to an almost million man force.  In the course of firing 10k Mk262 rounds, the life of a barrel, one could replace the rifle several times over including $1000 optics and laser pointers.  Mk262 cost is actually the reason the Marines transitioned from Mk262 to the Mk 318 SOST round.

What eventually resulted from the Lake City meeting was a plan to use funding for an environmentally friendly round to create a more lethal round that “also happened” to be green.  A shrewd decision was made to not publicize the attempt to increase lethality so as to be able to look at all potential solutions and avoid being depicted by some as trying to circumvent international law ammunition conventions that could have shut the project down prematurely.  There was also the danger of the good idea fairy that lives in the greater Army and Congress showing up and slowing down the project or even derailing it. Finally, there was concern that “more lethality” would have raised the attention of those that want to wage war more “humanely” and the unknown ramifications of those good intentions.  (See Afghanistan or Syria ROE.)   The effectiveness of this conscious effort to downplay the effort to make M855A1 more lethal than existing ammunition still haunts us today.

What resulted five years later was the current M855A1 round.  (The Army has been using M855A1 going on six years.)  M885A1 is an exceptionally lethal sub 2 MOA (less than 2” spread between rounds at 100 yards) round.  M855A1 is similar in weight to M855 “green tip” (62 grains) and is a ballistic near match with M855 allowing the continued use of existing tracer.  The tip of M855A1 is where the expansive changes become apparent. M855A1’s bronze-colored tip is the anti-corrosive coating on its hardened steel penetrator.  The steel tip is bonded to a copper slug following the tip.  The steel tip provides increased penetration capabilities against hard materials and does not deform when hitting glass enabling penetration.  Propellant is temperature stabilized and has additives minimizing muzzle flash and copper fouling in the barrel.  The propellant creates a 13% increase in chamber pressure.

M855A1 has better penetration across all materials including steel than M80 7.62 ball ammunition which spurned the development of a sister round in 7.62mm.    M855A1 is also barrier blind meaning it continues in its ballistic trajectory after hitting a mild barrier like glass or car doors while still being lethal to the target behind the barrier.  Most importantly, M855A1 does not produce “through and through” effects on targets and is so lethal against tissue its soft tissue effects are classified.  I’ve written more on M855A1 and how it stacks up against Mk318 here. 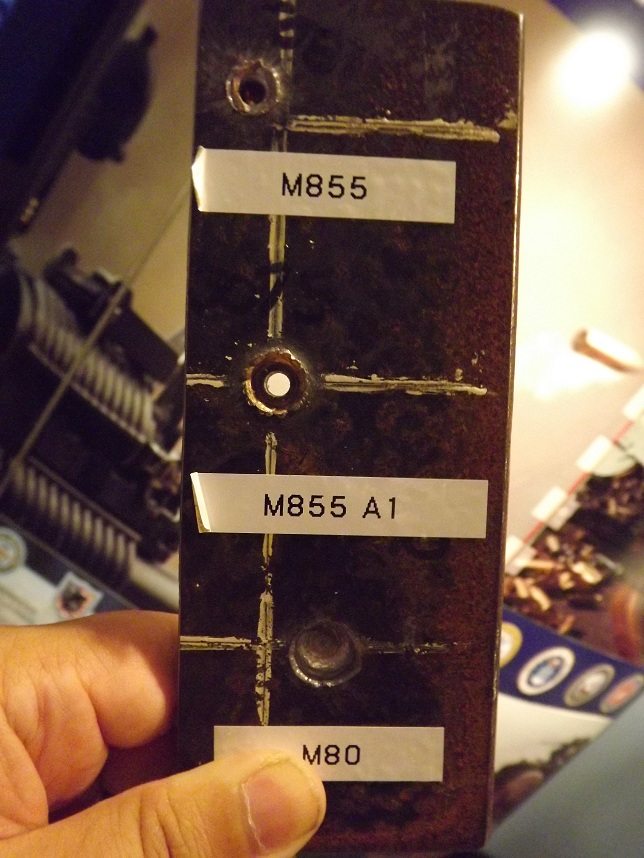 Comparative steel penetration by various rounds. Photo by Will Rodriguez

So yes M855A1 is a green round because it does not contain lead but this boogey man has been used to avoid talking about M855A1’s actual performance.  Almost all stories written about M855A1 fail to address the largely undiscovered history presented here choosing to present it as a marginal “green round”.  Why has this story been ignored?  Well the Army has made mistakes before in the development of equipment e.g. the universal camouflage pattern.  Branch partisanship has a role.  Some hold a deep bias against the Army consciously trying to minimize its successes because they threaten their branch’s decisions.  For others it avoids having to do research which can often unravel sensationalism that draws readers.

What we do know now is that while M855A1 is a “green round” it also became the most lethal and capable widely issued round in our military by consciously being hidden behind that attractive environmental imaging.  Brilliant!

2 weeks ago Marty Farrell
We use cookies to ensure that we give you the best experience on our website. If you continue to use this site we will assume that you are happy with it.Ok