Could you tell us a little about your background, and how you got involved in kettlebells?

I was a swimmer and a runner thought it would be cool to do “functional” training with a group of guys. Later I watched a guy named Rob Lawrence at a competition lift 106 lbs. (two 53 pound bells) overhead 61 times at my bodyweight (160 lbs.). I never saw anything like it. I was stunned at how he was able to keep at it. Another guy, Jared Savik lifted 70 lbs each hand (140 lbs.), for 45 repetitions. I could not even do one at the time!

Can you tell us how much weight you are lifting during an event?

For seniors, older than sixty years (>60) and juniors under the age of eighteen years, (<18) one may lift 35 lbs kettlebells.

For amateurs or Masters (between 40 and 60) one will lift 53 lbs kettlebells.   A female professional of 21 years, 5’8”, and 130 lbs. lifted 53 lbs. by snatching a kettlebell in consecutive 90 repetitions on one hand and 99 in the other hand, over her head. Best woman in the world!

Men who lift pro, such as myself, use 70 lb. kettlebells.

You have had a good run as a kettlebell lifter and continue to put in the work to excel. What is the thing about kettlebell lifting that affects you the most mentally?

The goals change as I improve. Initially I wanted to accomplish thirty kettlebell jerks with 53 lb. kettlebells. When I went to Moscow I did 28 jerks with 70 lb. kettlebells in 10 minutes, I wanted 50 repetitions.   Two years later I did 66 repetitions for kettlebell jerks and 87 snatches for Master of Sport ranking. I’m still at that level technically even though now my best result is 86 jerks and 138 snatches at the Las Vegas Olympia. It’s a 42 % increase.

From Russia in 2005 I saw some faces I recognized this year and they had a 176% increase from my time seeing them last time. I could NOT lift two 70 lb. kettlebells for years and now I’m shooting for 100 soon. The mental aspects that get taxed are those physical distractions; you travel, the food you ate is not the same, the sleep schedule is off. Yes these are detractors but just thinking about them screws up mental focus. One should focus on breathing cadence and set small attainable goals through his/her session. If your goal is 100, focus on getting to 15, then 30 then 40 etc.

What’s a misconception about the sport of kettlebell lifting?

Strength reigns king. It is fundamental to lifting to have a base level of strength but its endurance and mental tenacity as well as technique that is paramount.

Where does your motivation come from?

It is ultimately Survival and simply more repetitions. A common challenge is trying not to put the bells down before the time is up. It comes from my Father, teachers and students. I need to inspire them and show them what I preach.   I face the challenges they face and then some. Its important for them to see how I manage them.

Who is your hero in life?
My father. My mental toughness came from him and it pales in comparison.

When are you the most nervous competing?

Being nervous is somewhat good. If I’m not as prepared as I could be I get a little nervous but a warrior must work with the cards they’re dealt and the conditions that are set. There are NO-GO-backs. There are no do-overs.

In your family, who likes your sport the most and why do you think so?

My Father although he keeps me grounded. He showed me a book “The Boys in the Boat”. It was Daniel James’ book about nine Americans and their epic quest for gold at the 1936 Berlin Olympics in rowing. These were a bunch of poor blue collar workers that won the gold and they beat their rivals. The American rowing crew beat the German crew who came from privileged backgrounds, and from British or eastern schools and had access to much. The boys came from logger, shipyard, and farm families and had nothing to their names but guts.

Tell me about things that didn’t go the way you wanted it, and how you moved on to a better success. I mean, really, what is your biggest failure to date?

As it relates to kettlebells? Which time? I dislocated my shoulder trying to lift over my head 132 lb kettlebell after a competition when I was tired. I attempt the ranking Master of Sport 11 times and missed each time by one rep. On YouTube there is a video where I miss it by two reps in 2007.   My grip utterly failed.

Its like water, if you can’t go through it go around it. If you fail at something, try something else and push the limit and then come back to the problem. For example with kettlebell, people get hung up on lifting heavier kettlebells for a goal 30 reps with two 70 lbs. but get stuck. But what I say is to do 100 reps with 53 lbs and come back to 70 lbs again. Instead of trying to lifting 70 lbs in training all the time.

What has been your biggest success to date? Numerically my most recent competition. I scored 86 kettlebell jerks and 138 kettlebell snatches (75 right hand and 63 left hand with ) 70 lbs kettlebells.

Have you ever completely annihilated yourself before?

I tried a competition where I cut too much weight and literally just faltered falling short of my goal by 40%.

You’re also doing a lot of competitions with athletes from other nations, such as Ukraine and Russia. How do you feel training against people who are particularly good at what seems to be a national sport?

At my most recent competition out of the 3 Ukrainians in my weight class only 1 beat me. This kid from Russia beat me also. What that means is the total. In kettlebell snatching I beat the Russian kid, a World Class athlete.   It was the first time I went 10 minutes in both lifts. 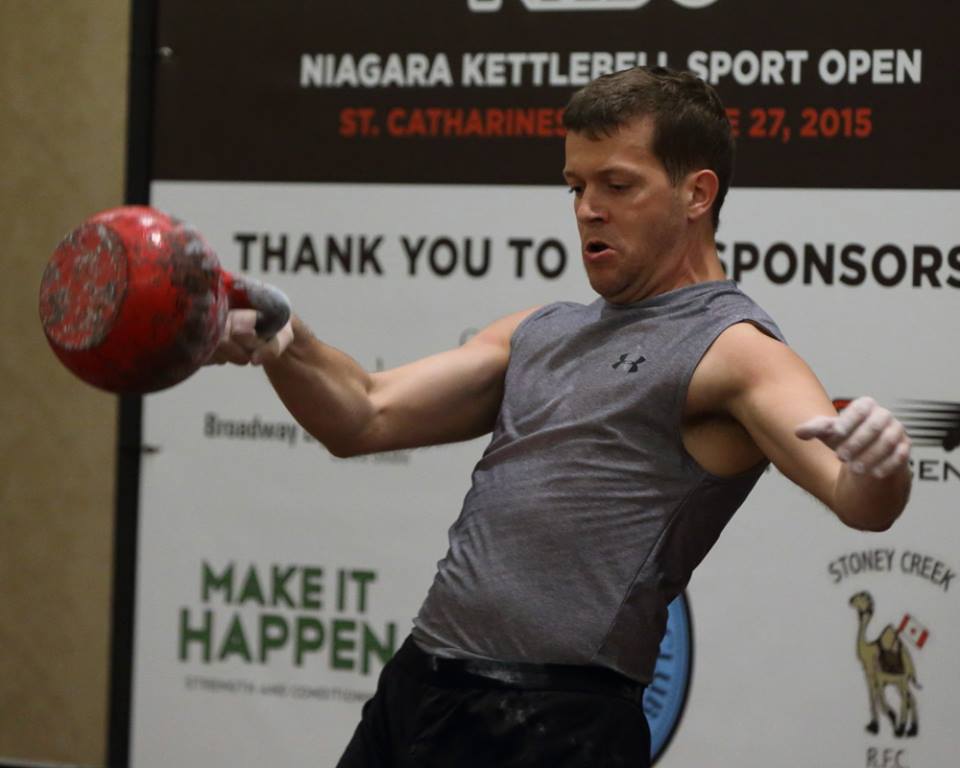 You just finished the Olympic show in Las Vegas, 2014. What was a struggle for you and were you happy with your performance?

The room was too dry. My student, among many other pros quit early because of breathing restrictions. I went 10 minutes in both lifts, the full time for the first time. I was gassed when I switched hands at 5 minutes. I slowed the cadence slightly and kept at it til the time elapsed. Then I collapsed. I was happy.

What mental or physical areas did you personally struggle with and how did you overcome them?

When you switch hands snatching you think, “Fresh hand” but then as you’re gasping, you think” I have to repeat this for 5 minutes?”   I felt that hard during the struggle.

So, what is your training philosophy?

Challenge yourself but stay smart, continue to refine your skill always.

During your best placement ever did you perform the way you thought you would, or were you surprised?

I was surprised after I was done that I didn’t quit;) but the numbers were within my physical ability.

What do you tell yourself when things look bleak or you feel weak?

What do you specifically do for goal setting?

I though 85-95 jerks given the conditions of travel. And 140 snatches (138 but it’s still a record over 130) I flew in the night before went to bed at midnight, woke up at 6 AM and lifted at 10 AM. What’s funny is that it was said that I would catch a flight 7 and flight 5 I went to the bathroom. I came back and they bumped my flight up to 6. So my warm up time was diminished.

What is difficult about your sport?

It varies, some days its physical and some days mental.   Are we talking about lifting in the morning or in the evening. Is it on a work day, a vacation day or someplace not familiar?

What is your favorite food?

Any lesson learned today that you wished you knew a few years ago?

Pick up technical skills faster. Otherwise we hit our head against the wall.

Any lessons for our readers?

Patience is key in the game of kettlebells.

Any particular music on your iPhone you recommend to get motivated for workouts?

More Zen music for longer sets. More amped music for interval or shorter sets. The music should run parallel to the activity.