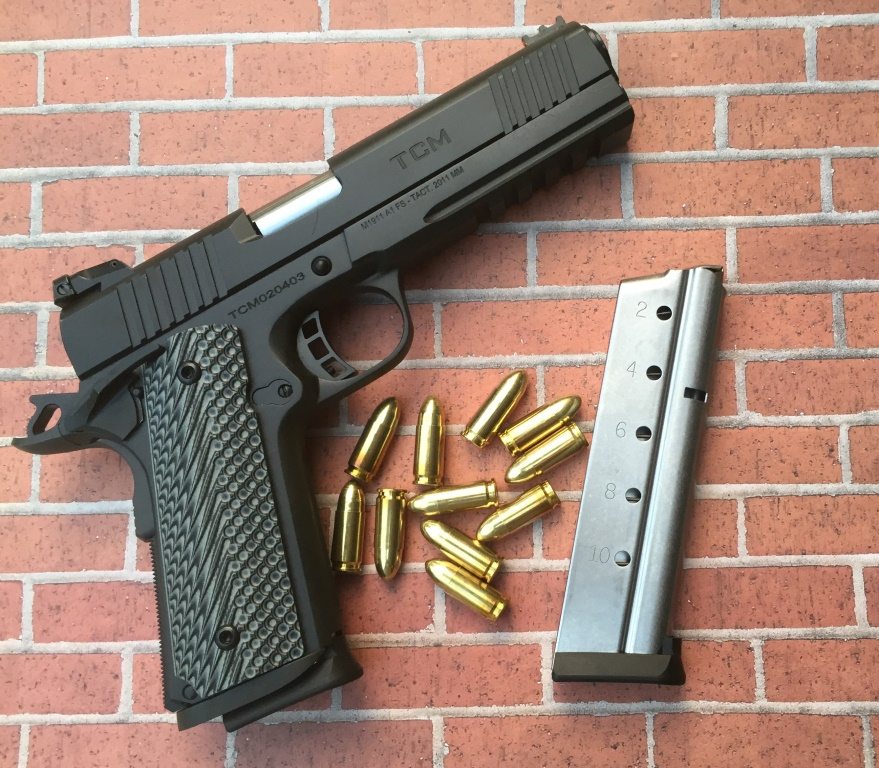 Rock Island’s TCM TAC Ultra Full Size (FS) is the third pistol in my series of reviews on the company’s innovative new 1911’s chambered in 9mm AND 22TCM.  When I opened the box the movie Robocop came to mind.  I learned the passing similarity to the Desert Eagle wasn’t the only thing the guns have in common with of course some stark differences.  My sample came with the gun, two fired 22 TCM casings, a 9mm barrel, recoil spring, sight adjustment tool, allen wrenches and a spare magazine.  Finish is the traditional blemish free, evenly applied Parkerizing seen on Rock Island’s TCM series.  The Rock Island Armory’s logo (forward of the hammer, left side of slide) stands out.  “TCM” is roll stamped on the forward right side of the slide.

As I mentioned, the TAC Ultra FS had me thinking Robocop.  Likely because the full slide rail makes the gun look heftier and meaner than it is.  That all but disappeared once I handled the gun.  Its solid steel construction communicates substance but then most 1911’s do.  The attractive and aggressively checkered grips insure the gun stays put when you fire it and handsomely complements what I think is a slightly futuristic look.  The gun has a TON of features including a skeletonized trigger, adjustable rear sight, fiber optic front sight, full beavertail, a steel guide rod, ambidextrous safety and serrations along the forward part of the slide to facilitate slide manipulation.

As with the other guns in the TCM series, the TAC Ultra FS comes out of the box being capable of shooting two calibers.  All one has to do to switch calibers is install the appropriate barrel and recoil spring.  Most shooters are familiar with the 9mm round.  They probably aren’t with 22TCM, a round that may eventually prove to be an effective .22 caliber self-defense round.  22TCM looks like a shrunk and overweight 5.56 round.

The single stack’s magazines are MecGar in manufacture with a sizeable baseplate pad which helps mags drop quickly as well as driving them home in the pistol grip.  Capacity is 10 +1 9mm or 22TCM rounds.  It’s a nice plus being able to use the same magazine regardless of what ammunition you are using. 9mm will not seat in a .22 TCM barrel while the opposite will.  I DID NOT try and fire 22TCM through a 9mm barrel.

I’ve written a couple of reviews on Ruck Island’s TCM pistols.  To add a new perspective, I approached my friend and master gunsmith Pat Sleem of All American Firearms & Training Gunsmith for his insight on the pistol and input.

Pat is a story unto himself.  As he pursued competitive shooting post West Point he learned local commercial gunsmiths wouldn’t be able to support his shooting passion and so set about standing up his own gunsmithing capability.  A three-time All-American collegiate pistol champion while on the United States Military Academy’s pistol team, he went on to earn the Army’s prestigious President’s One Hundred marksmanship distinction four times and deploy to Iraq twice as an Infantryman.  He is currently a Major and competes in the Army Reserve’s marksmanship team while running his gunsmith business full-time.

Loaning Pat the TAC Ultra FS along with several boxes of 22TCM ammo and asked him to go at it.

Thanks Will.  From the top I’d say, “22TCM has a very high cool factor!”  When fired, the 22TCM fireball is impressive (que Robocop theme) but the recoil will surprise you.  There is hardly any, surprising considering what one would expect coming out of a 1911 chassis especially when spewing basketball sized flame.

While 22TCm is fun and blistering fast I found 9mm to be more accurate.  Besides the ammo, using one barrel bushing for two different barrels is inherently going to make one barrel and the round it fires less accurate.  The point of aim shifts.

After shooting I noticed some brass marks to the rear of the ejection port caused by ejected brass.  I suspect the extractor could use some tuning.  Harmless in the short run and maybe a requirement to ensure reliable extraction of that pudgy 22TCM round.  I had one failure to extract in about 100 rounds.    I also noticed a magazine fitting problem.  It’s not strange to 1911;s though and like all the other minor issues can be readily tweaked.  I’ve worked on a few and they turn out to be great guns.

I like the TAC Ultra FS.  It shoots true, is a hell of a lot of fun and complements those with 1911 muscle memory and preference a platform to shoot two calibers especially the ubiquitous 9mm round.  Like I said, very high cool factor!”

Thanks for the opportunity.

I agree with Pat on his observations though I didn’t have any failures to extract.  My groupings with 9mm were nickel sized at 15 yards though I prefer a blades and/or dots vs. fiber optic front sights.  The 9mm recoil seemed less than my Glock maybe due to that all steel 1911 frame though grip geometry may have an impact also.   One thing I did notice was that my railed 1911 holsters didn’t fit the TAC Ultra FS.  Most railed 1911’s don’t have full length rails on them.  It’s something to remember as you assess your railed 1911 holster’s compatibility.

Most of my 1911’s are double stacks.  This traditional single stack was pretty easy to hold and still has 2-3 more rounds than the traditional 1911 chambered in .45.  As with all the Rock Island TCM’s I’ve shot I LOVE that checkered slide stop.  Magazine changes just seem to flow smoother as that slide stop while not bigger seems surer to operate.  I’m going to get my other 1911 slide stops checkered. 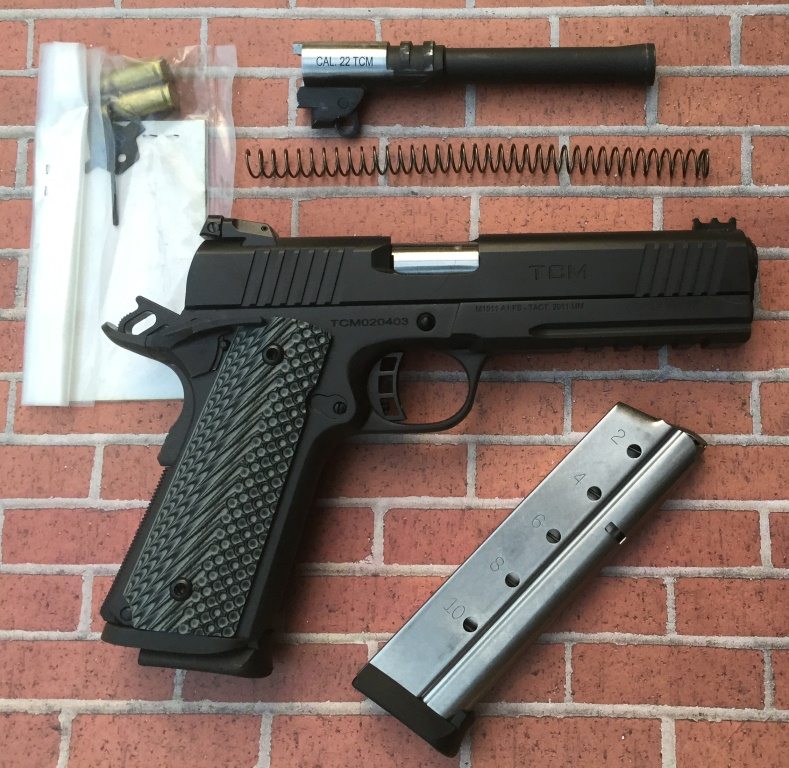 Rock Island’s TCM TAC Ultra FS out of the box with extra mag.  Photo by Will Rodriguez

One magazine (sadly this is what I understand production guns come with)
Typical 1911 tweaking may be required.

All in all the TAC Ultra FS is a winner.   After addressing the 1911 bugs and firing a couple hundred rounds to confirm this gun could serve as an everyday carry or home defense gun.  When firing 22TCM, be prepared to be the focus of the firing line.  It’s loud and luminous.  “Coolest gun on the market”

Material Disclosure: I received this weapon from Spotter Up via Rock Island Arms and was not required to write a positive review. The opinion expressed here is my own. 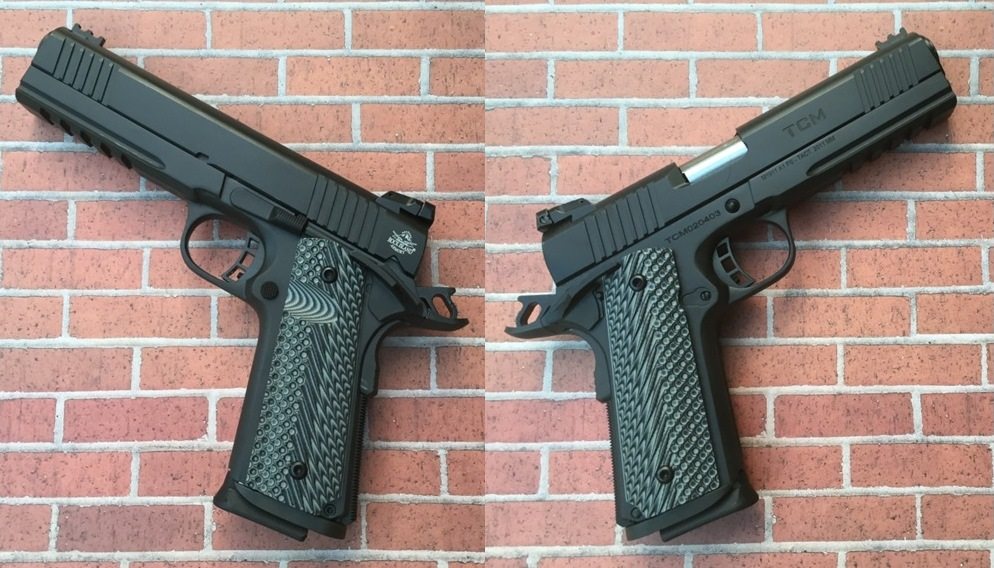