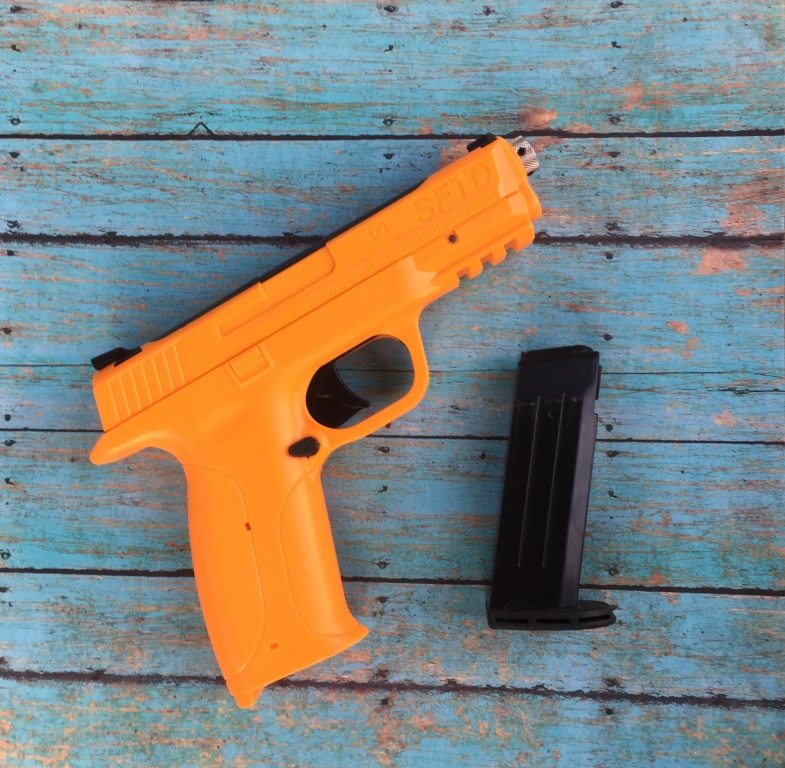 If you are an instructor or serious shooter you absolutely need a laser training pistol.  There are varieties out there and they are a fantastic tool to help beginners and exponentially increase the value of dry firing for the experienced shooter.  Laser Ammo graciously sent me their Advanced Training Laser Pistol (ATLP).  I was lucky enough to get the Pro model with red laser.

The ATLP is a well manufactured, solid training aid.  Short of throwing it around carelessly (something one wouldn’t do with a real gun) it will provide you thousands of free laser ammo shots.  The pistol comes in a foam padded plastic box with a spare battery, allen wrench to adjust the sight and instructions.  It’s made of a tough polymer molded in blaze orange, a great feature for a training aid.

The ATLP looks like a Smith& Wesson full size M&P and works in a variety of holsters designed for full size M&P’s or even their smaller versions as long as the holster has an open channel to accept the full length slide.  Having a different choice than a Glock or a generic pistol that might not work in any holsters is a nice feature especially if you want to work on drawing from a holster. 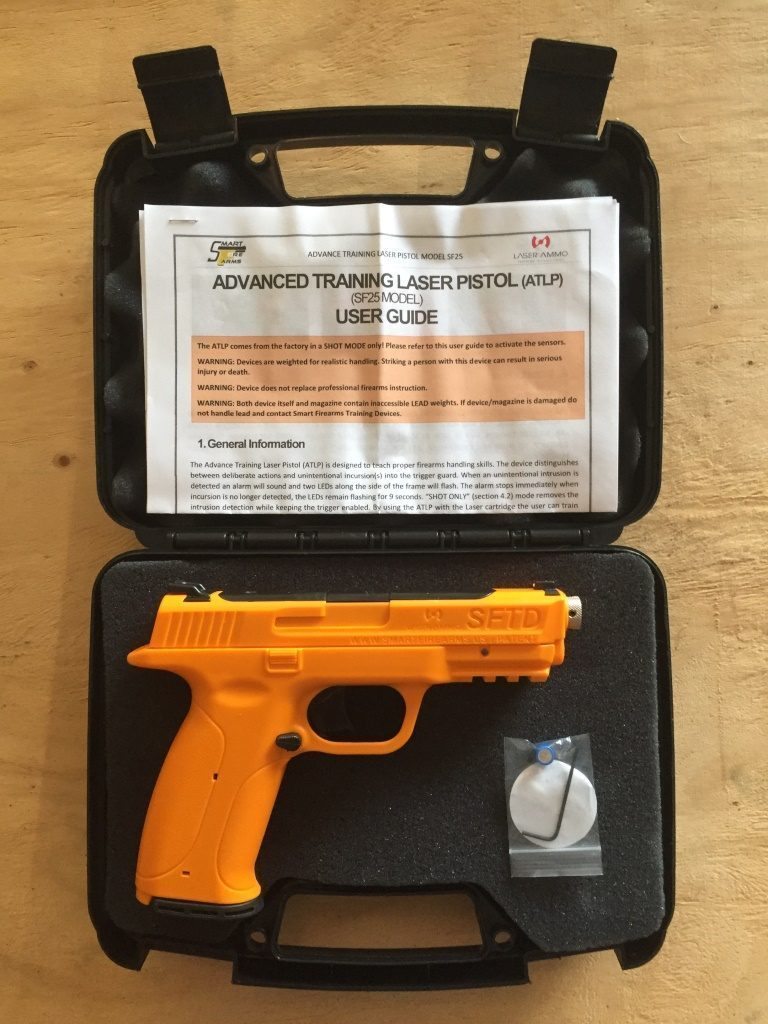 When you squeeze the trigger, the pistol fires a laser beam pulse and makes a gunshot sound.  The laser beam is easily adjusted for pinpoint accuracy.  The gunshot sound seems kind of loud and annoying to me.  I wanted to turn it off as I like to use a laser pistol to shoot fleeting targets on the TV on war type movies and “The Walking Dead”.  I know, that kind of violates safety rules since you shouldn’t point a gun at anything you aren’t willing to destroy.  Since the ATLP isn’t really a gun I’ve made some allowances.  I’m prepared to accept responsibility if my ATLP ever shoots a real round or if I’m stupid enough to confuse it with a real gun.  I wouldn’t be comfortable dry firing a real gun at a TV unless it was on a range and the target.

Anyway, the loud sound of the ATLP could be a bit much for fellow TV watchers.  My wife accepts the “click, click, click” and red dot of my other training pistol.  (She’s a keeper.)  I called Laser Ammo and they actually have a way to disable the sound.  I promptly followed the directions and the sound was turned off.  One just has to repeat the process to turn the sound on again. Laser Ammo will be updating the printed instructions.

Windage and elevation changes to the laser to align the beam with the sights are pretty easy and straight forward.  There are four screws on the silver bezel that holds the laser and mimics the muzzle of a real pistol (think of a suppressor ready barrel).  Loosen and alternately tighten the appropriate screws until you get perfect alignment!

I like using visible lasers on my training pistols so I can use them both with and without laser friendly targets.  I’m not going to get much feedback if I or a student fires an IR laser at a target.  Laser Ammo is one of the few if not only companies that offers visible and IR laser training pistols and targets.  A huge advantage to this specific training pistol is its compatibility with Laser Ammo’s whole line of laser targets.  The ATLP’s compatibility with Laser Ammo’s Interactive Multi Training Electronic Target System (i-MTTS) might be reason enough to own one.  The Pro ATLP comes with night sights which supports low visibility dry fire training.

While I like the laser burst feature of the ATLP it doesn’t provide me a cue to determine if a student is pinning the trigger when they shoot.  The trigger is also problematic.  It doesn’t simulate a trigger reset which is a detriment to practicing very fast multiple shots.  I’m talking rapid three shots or more a second.  (Rate of fire seemed to increase with the sound off probably because I didn’t have to wait for the sound to reset.

Over time I learned where the electronic reset point was but I wasn’t training to a tactile stimulus.  I was learning this specific trigger.  That issue probably only impacts a segment of serious shooters and isn’t really an issue for training basic students.  I did like the very smooth trigger pull on the ATLP but a trigger building to a break point would be more realistic. On the other hand, the trigger will definitely surprise novice shooters if one is trying to emphasize steady trigger squeeze.  It also emphasizes proper aiming.  There’s not the slowly increasing pressure of a trigger break to tell you, “tighten up on your aiming, the shot is going to break.”

The mag release feature on the Pro ATLP is a big positive.  The dummy mag is weighted and feels like a full mag.  That helps to ensure it drops.  Mag release is ambidextrous which is unique to the market.  Incorporating tactical/combat reloading into your dry firing time expands what you can do with a specific training aid and helps to minimize risk.  The mag well opening has sharper corners than a real M&P.  This makes the user be right on with reloading which if I had to have some imperfection in a training aid I’d prefer a higher level of difficulty especially when it comes to loading a fresh magazine.  The difference is nearly imperceptible though.

The most unique feature about the ATLP is its accidental discharge sensor.  When turned on, the gun will pick up the errant finger in the trigger guard and warn you with a loud beep and pulsing yellow light.  The alarm can be adjusted for over sensitivity.  I found the alarm went off between .5 – .8 seconds after inserting my finger in the trigger guard.  If I start applying pressure on the trigger though, the alarm won’t go off.  For the shooter concerned about weak trigger discipline and the new student the feature is excellent.  I think for a new shooter it would be a priceless tool to drive home the concept of keeping your finger off the trigger early on.

Here’s a summary of my review of the ATLP Pro: 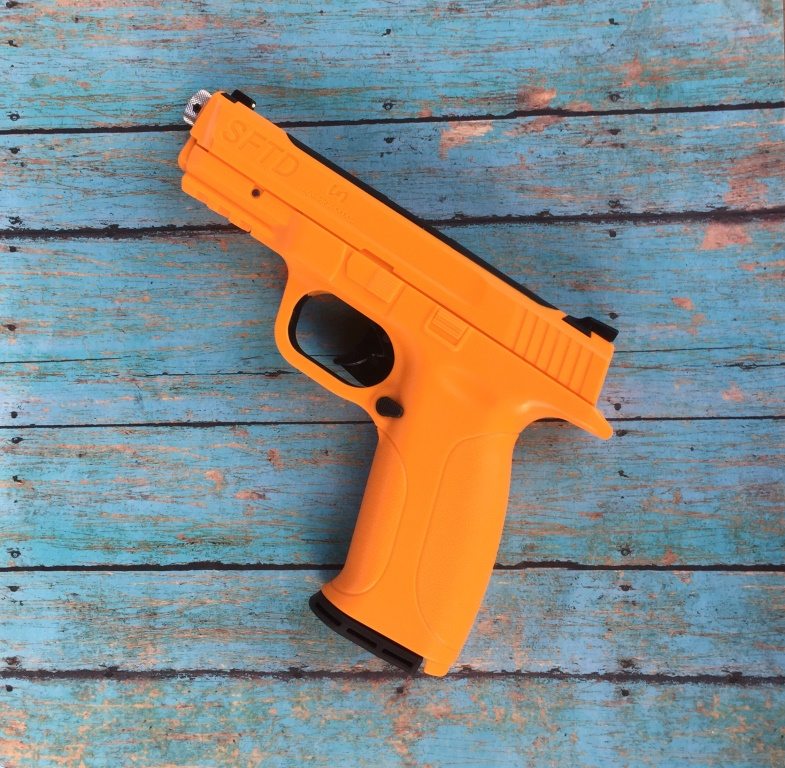 Left Side Laser Ammo ATLP Pro.  Photo by Will Rodriguez

If I didn’t have a professional grade laser training pistol I’d definitely be in the market for the ATLP.  I’d consider it a must have if I had Laser Ammo’s laser targets especially their excellent i-MTTS.  The instructor and serious shooter should definitely have a laser training pistol and splurge for the removable magazine option.  Even while owning a competitor’s laser training pistol the strongest consideration that would drive me to purchase the Pro ATLP is its accidental discharge sensor.  I’ve had occasion where I’ve needed to drive trigger finger discipline in new students.  This training aid would be ideal to teach that critical skill.  If I had one I’d make EVERY basic student use it to imprint trigger discipline in their mind.  If Laser Ammo could install a tactile trigger reset this would be the best laser training gun out there. 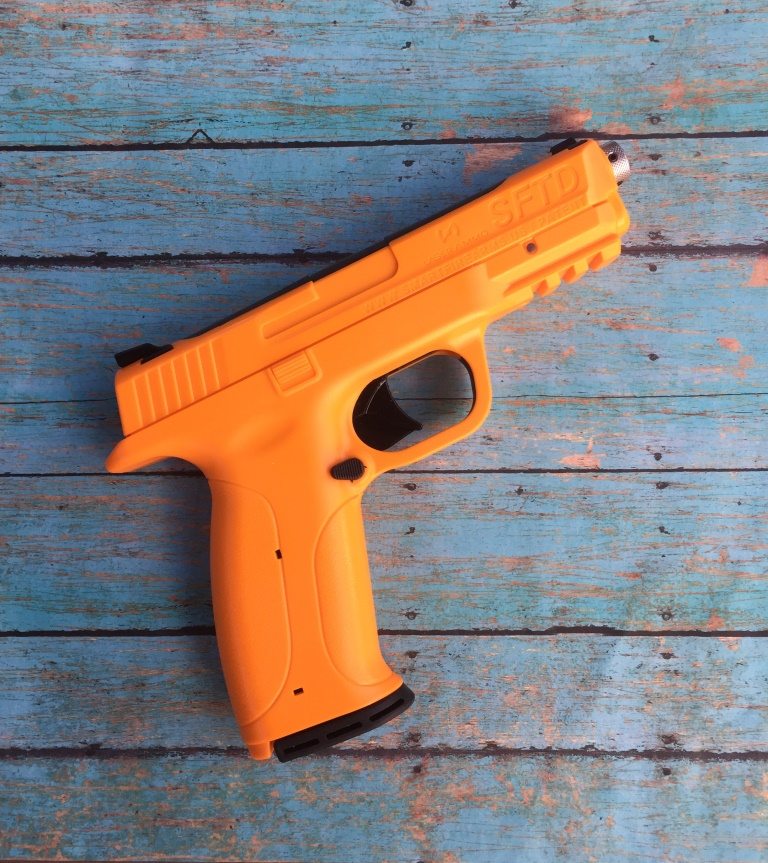 Right Side Laser Ammo ATLP Pro.  Photo by Will Rodriguez