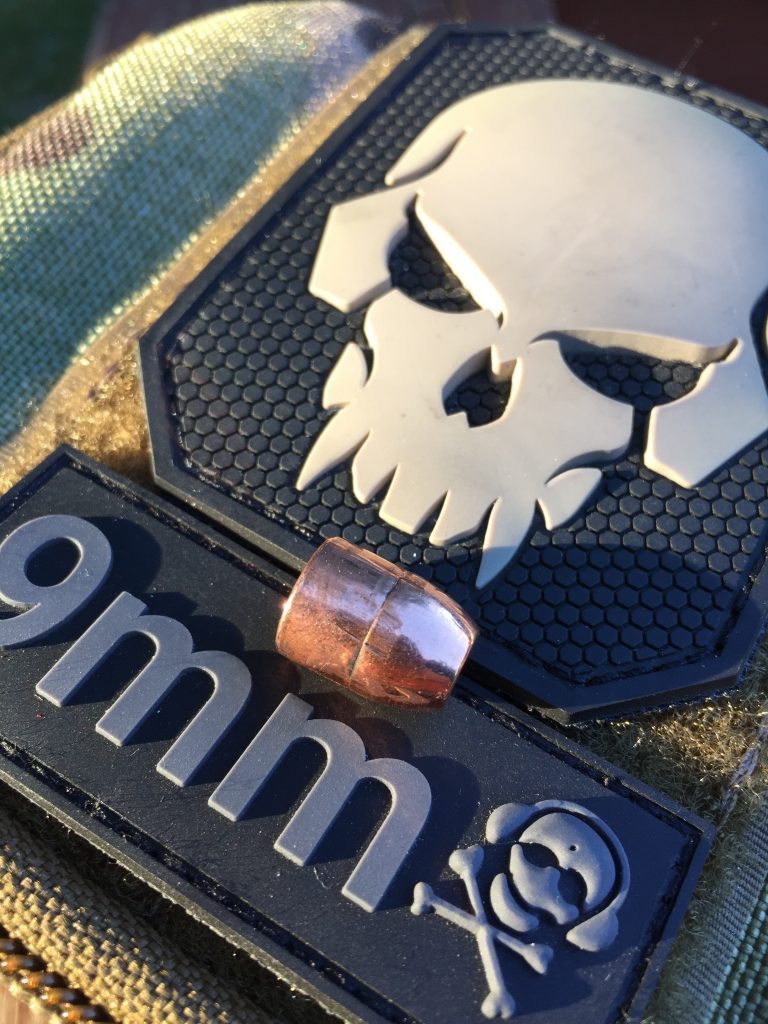 Yesterday at the range I experienced my first squib load. A squib load or simply a “squib” is a type of firearms malfunction that happens when a round is fired that does not completely exit the barrel of the gun. The most common reason for this is too little or no powder in the round. The primer will propel the bullet part way down the barrel where it lodges and must be forced out mechanically using a tool of some kind. This can be extremely dangerous if the shooter doesn’t notice and tries to fire another round down the barrel.

I was shooting some old remanufactured training ammo (.40S&W) from Freedom Munitions that I wanted to burn through, and I was running some simple shooting drills from concealment. I made it through most of a box of 50 rounds when one of the my shots made distinct sounds such as, “click” and “pfff”. A small puff of black smoke came out of the loaded chamber indicator on top of my M&P and the gun didn’t cycle.

I immediately knew something wasn’t right about that shot, it didn’t feel like a typical malfunction, which if you shoot a lot, you WILL experience from time to time. I didn’t jump into a tap-rack-bang drill (luckily), I simply racked the slide and a casing was ejected and I saw the chamber was clear. However my instincts told me to take the gun apart and examine it closer. I have seen three shooters have squib loads since I started competing in early 2015, so the concept wasn’t new to me, which may have influenced my reaction to the malfunction in the first place.

When I broke down the gun and looked down the barrel I saw this: 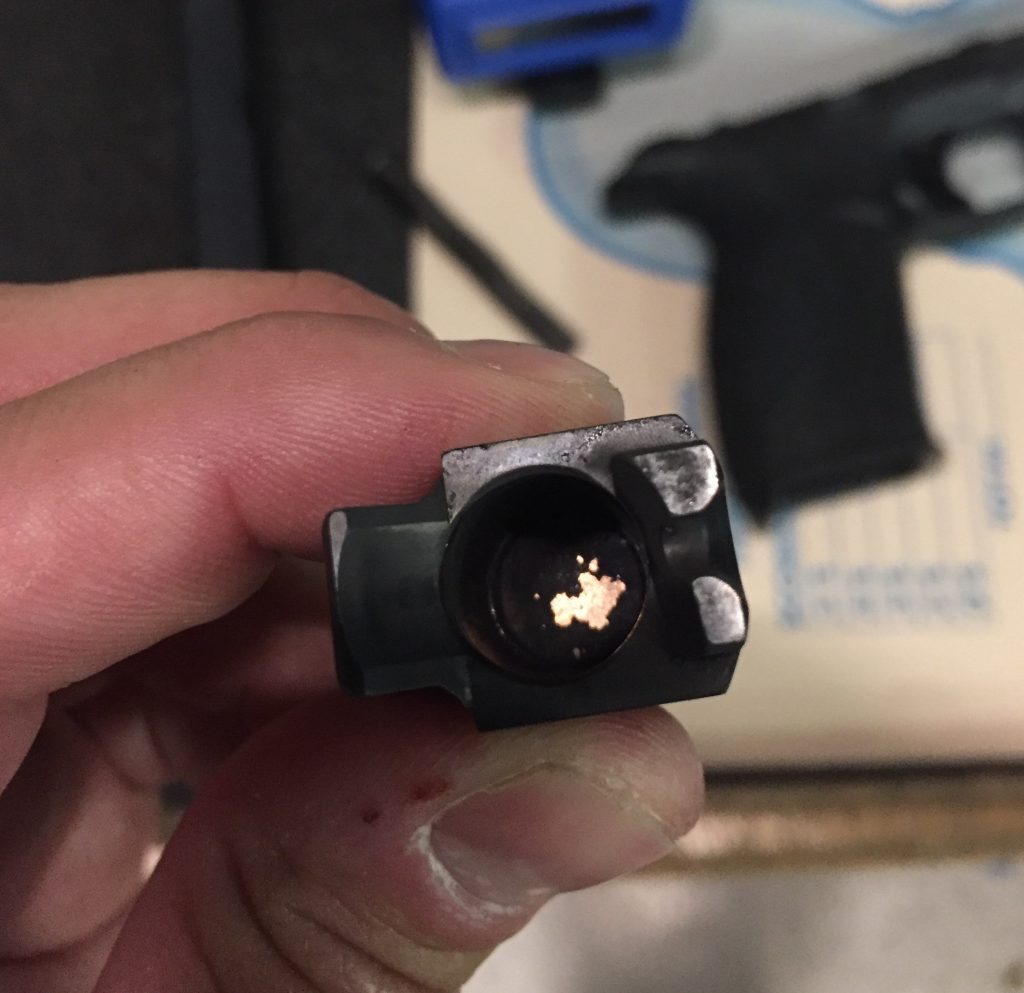 Barrel is obstructed by the projectile. You can see black residue covering most of the copper

Sure enough, one of the 165 grain projectiles had lodged itself about 1/4 of the way down the barrel, just far enough that I couldn’t see it in the ejection port, and had to break the gun down to find it. I credit the M&P design for having a visible loaded chamber indicator port on top of the gun which allowed the black puff of smoke out, a visual cue to add to the other tactile and audible cues I could have picked up on to help me understand what happened.

The projectile came out easily with a light tap from a metal punch (recommend a wood or plastic tool for this so you don’t damage your barrel), and you can see the rifling marks on the bullet where it started to be compressed in the barrel. 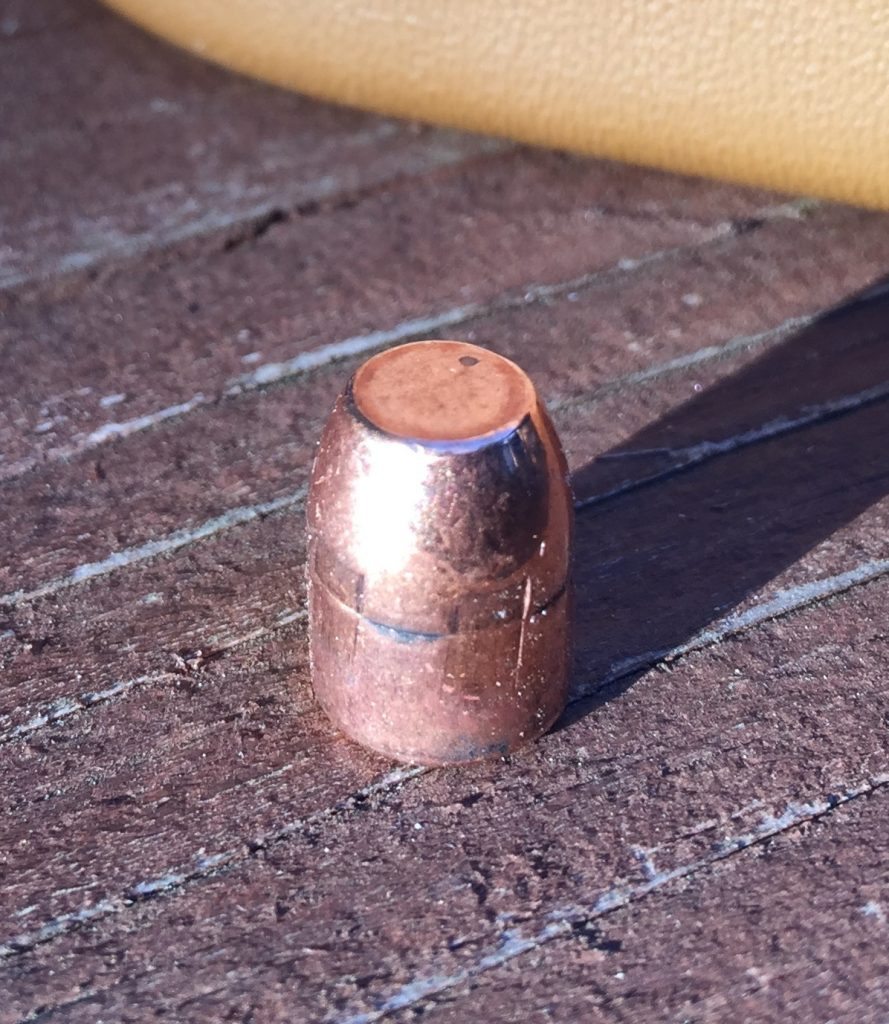 Lesson to learn here is to trust your instincts and don’t ignore the indicators when you are shooting. If I had been running through a string of fire quickly and tried to simply tap-rack-bang…..I would be telling a very different story right now.