Iraq- The Struggle Between Experience and Emotion

Having already experienced the invasion and occupation of Iraq, I know firsthand the reality of the social construct governing life there. I don’t need to repeat the history and civics of Iraq, but being what they are, applying military force to create a safe and functioning government and society there is impossible. Given the history of failures on the part of the U.S. government to actually nation-build (except for Germany and Japan), it’s not likely our present or future governments will take the necessary economic and diplomatic steps necessary to create the framework for military action against ISIS to succeed. Even a strategy to eliminate or dismantle ISIS cannot succeed without a safe and functioning government in Iraq, as the fall of Mosul, Fallujah, and Ramadi has shown.

So given my understanding of what our policy should NOT be based on experience, why do I still want us to continue and increase military operations in Iraq ? Well, let’s look at things from the perspective a Shia father, husband, cousin, nephew, friend, and former interpreter for the Marines and Army. 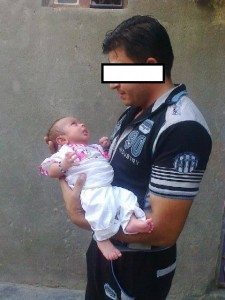 I’ve stayed in touch with “Mikey” off and on since 2004 when we first met. Each “off” time I thought he had been discovered and killed for being an interpreter. What struck me about Mikey was how American he acted. He was 19 when he became the interpreter for my unit in 2004 and spoke and cussed with the fluency of a 19 year old Marine. He was totally committed to his mission of protecting Marines and saving Iraqi society. He had more energy than all of us combined, had more personal loyalty and morals than most Marines, and yet remained surprisingly innocent of human culture as a whole.

A year before the fall of Mosul by ISIS, I received a call from Mikey after not hearing from him for several years. He asked me if I could smuggle him across the Mexican border. He wanted to take a ship from Iraq to Panama and from there make his way through Central America to Mexico and across the U.S. border. It was a drastic request. He told me things were not going well in Iraq and it was far worse than what American news was reporting. ISIS was taking over the country, car bombs were going off in Baghdad on a frequent basis, and he had to get out of the country. It scared me. Then I lost contact again.

When Mosul fell to ISIS in the summer of 2014 and their forces swept south towards Baghdad with lightning speed, I felt I had failed Mikey. He used to live in northern Baghdad, only a few miles away from ISIS’s advance. Not only was he being hunted by Shias and Sunnis who wanted him dead for helping Americans, now ISIS was on his doorstep. 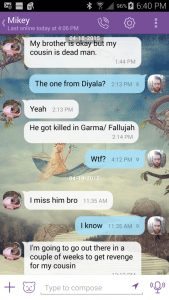 After almost a year of no contact, he messaged me. He was traveling north with his brother and cousins and volunteering to join the Iraqi Army. ISIS had murdered one of his cousins in Tikrit and now the family wanted blood revenge. Mikey vowed to die fighting ISIS.

At that point in time, I could give two shits about policy and nation-building. The only thing that mattered was my man on the ground. I didn’t think he would survive fighting alongside the Iraqi Army. I tried my best to find a way to join up with him to lead him in battle, but it was next to impossible without at least $100,000 in cash. So I had to sit back and wait for his text messages. Or worse, his phone calls. 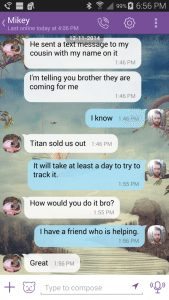 Once he joined his unit in Baghdad he told me once again that he was going to fight ISIS until he died and then I lost contact. Several days later, I received messages that he was in Balad and had barely made it there alive. His convoy had been ambushed on their way north and it had taken all night to fight through the enemy. He then told me that his 12-man group of volunteers was going to leave the Army and make their way to Mosul on their own since the Army wasn’t going to try to retake Mosul. I tried to convince him to wait and not do it, but when he sets his mind to something he does it.

After several more days of no contact, I thought he was dead once again. Then I got a terrifying call. His men were in a Kurdish holding room in Kirkuk. The Kurdish forces had taken their vehicles and weapons and were questioning them as ISIS fighters. Mikey was freaking out and telling me that the Kurds were going to execute them. He wanted me to know that is was the “fucking Kurds” that had killed them if I never heard back from him. They were going to try to escape and make their way to a family member in the Shia section of Kirkuk. At that time, ISIS controlled half of the city. I told him not to do it, but he did.

Now, having survived the incompetence of the Iraqi Army, ISIS, and then Kurdish forces, he was left to relax at home in Baghdad. However, the leader of the local Shia militia came asking for him one day while he was away. They were coming to execute him for working for Americans. He fled south. While away, two of his neighbors were executed by the militia because they had worked for Americans. The militiamen keep coming back to his home in Baghdad looking for him. He can longer return to his home in Baghdad. His home is now elsewhere. He’s watched a friend get his head cut off. He’s lost more than one relative to ISIS. His neighbors have been executed by Shia militias who continue to search for him.

With Shia militias executing American collaborators and Sunnis in general; the Iraqi Army collapsing under any significant threat; ISIS making gains throughout the country; and Kurdish forces seizing control of their own autonomous territory in the north, why would I support the increased application of American military force in Iraq?

Because I hold true the “no man left behind” ethos. Mikey risked and continues to risk his life everyday he is in Iraq because he chose to fight with and protect American Marines and Soldiers so that they and Iraq would eventually become a safe place for him to raise a family. We left him behind. I left him behind. It’s my responsibility to do what I can to honor his sacrifice to America.